The Adventureland entrance marquee has been removed and a new one should arrive soon. Meanwhile, Star Wars: Galaxy’s Edge continues at a fever-pitch to open next month and Pixar Pals parking structure speeds along to open as quickly as possible. Of course, a merch run awaits at the end and much more in this latest park pictorial. ENJOY!

Candy Apples and cake pops were some of the sweets you could stuff into your basket (or gullet).

Just for the holiday, Oswald returned to Buena Vista Street.

After a busy weekend, the Easter Bunny took to Disneyland to greet guests.

We suspected we might see the fan favorite Rabbit in Toon Town but this was the only sign of the mischievous toon that we could find. 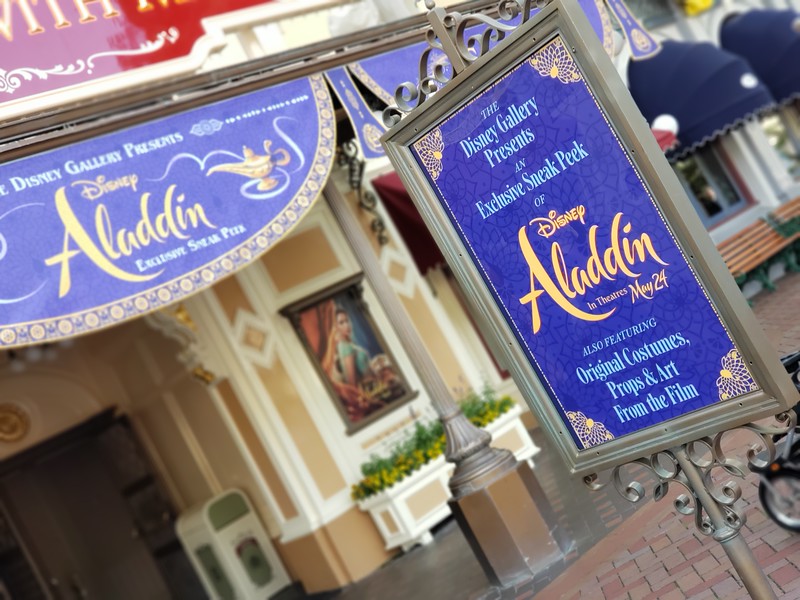 ALADDIN has made its sneak peek debut at the Disneyland Opera House and it brings with it an extended look into the new film plus concept art and some costumes from the feature plus the magic carpet! In the sneak peek — which takes place inside the theater, temporarily replacing Mr. Lincoln — we see some familiar visuals including a portion of “One Jump.” 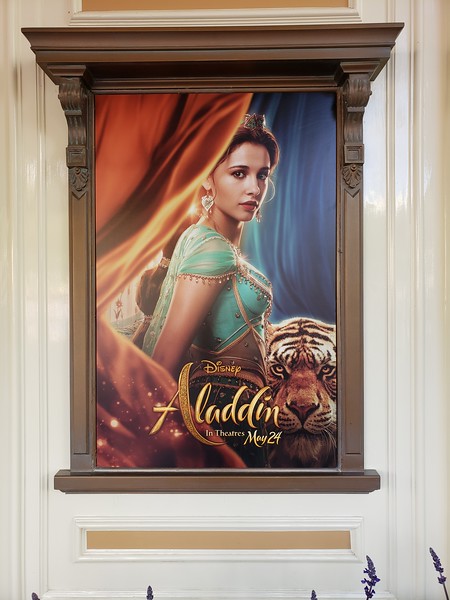 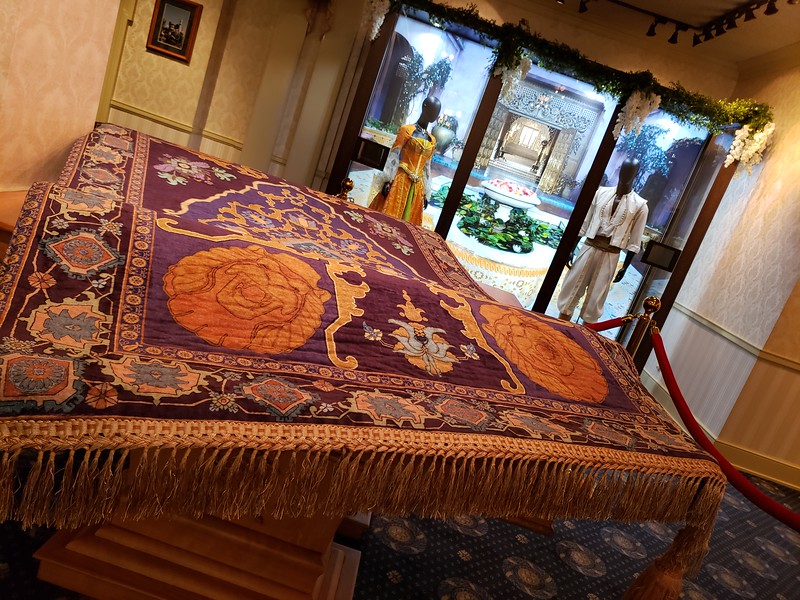 Mickey & Minnie’s Runaway Railway is coming to Mickey’s Toontown! The same attraction is already set to open at Disney’s Hollywood Studios at Walt Disney World in spring 2020 but will now also be coming to Disneyland in 2022. The ride will be identical to its Florida cousin, except for its entrance facade which will be uniquely designed to fit into Mickey’s Toontown.

Captain Minnie is here and she’s ready to help change the world! The Disney Cruise Line has officially launched a new initiative that puts Minnie at the forefront as a female leader to inspire with new youth programs and the funding of scholarships designed to empower girls and young women to pursue careers in the cruise industry.

MORE INFO: CAPTAIN MINNIE is steering this ship, get onboard Disney Cruise Line to see her!

The in-park views of the land haven’t changed much considering that in just over a month the land will be welcoming its first guests!

With grand opening so close, the Star Was: Galaxy’s Edge expansion (or unofficially Star Wars Land for the uninitiated) has unleashed tons of details about what guests can expect once they step foot in a galaxy far, far away.

Some major new construction is taking place on the new Spider-Man attraction.

The former gates used by the Red Car Trolley have been demolished.

Pixar Pier continues to to see changes nearly a year after it officially opened. 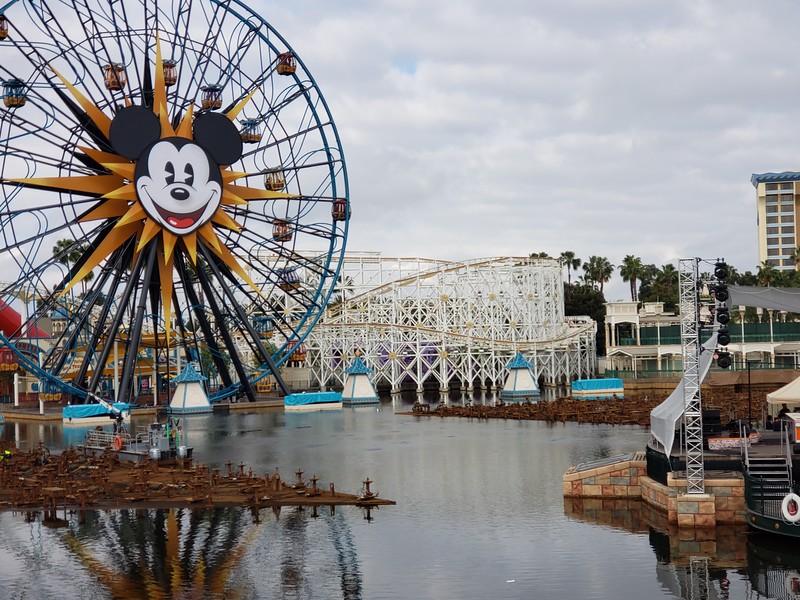 Seems like World of Color still has a lot going on requiring day-time maintenance during park hours.

New artwork has showed up on the benches in Pixar Pier. 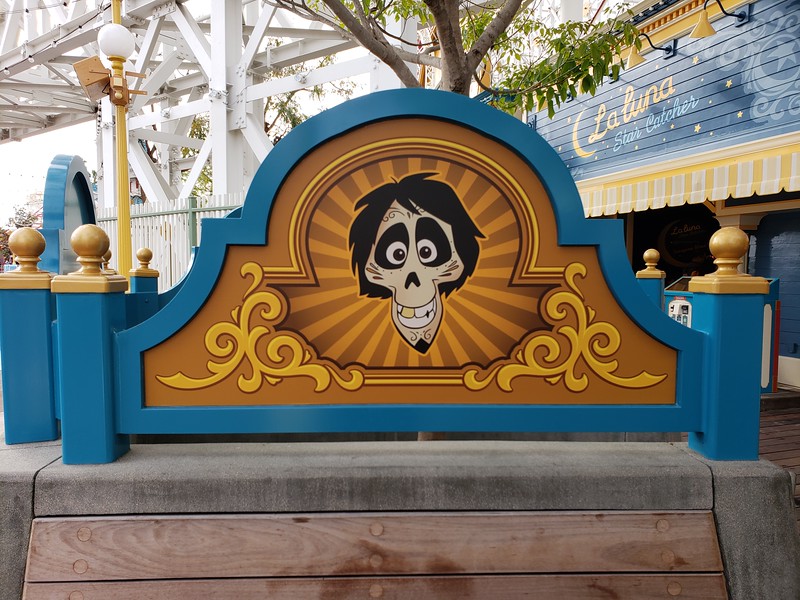 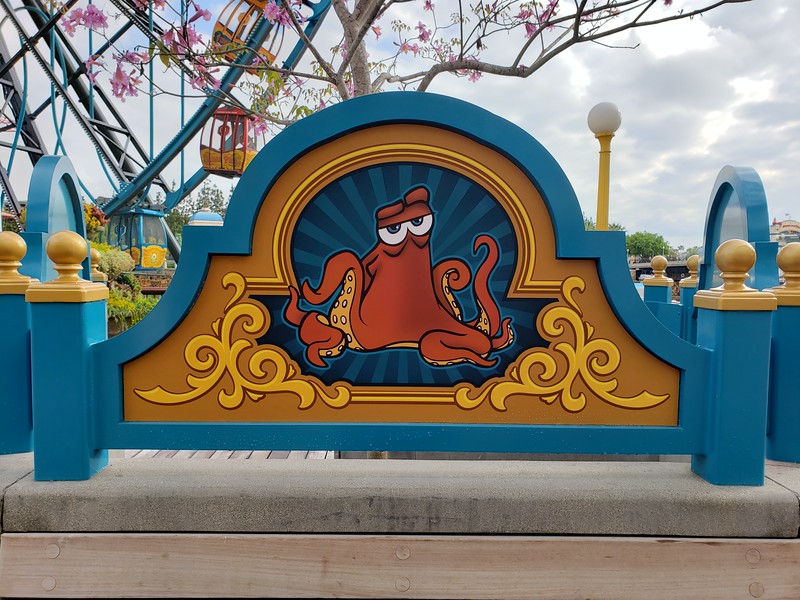 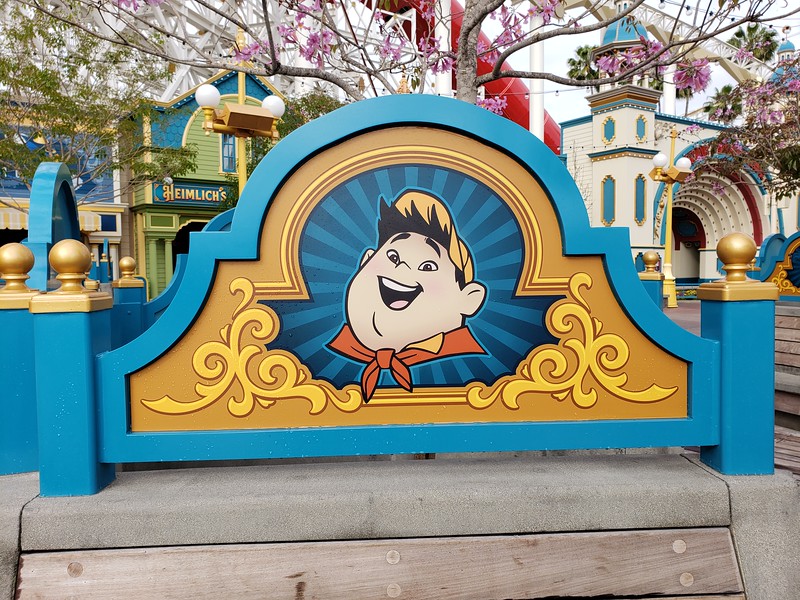 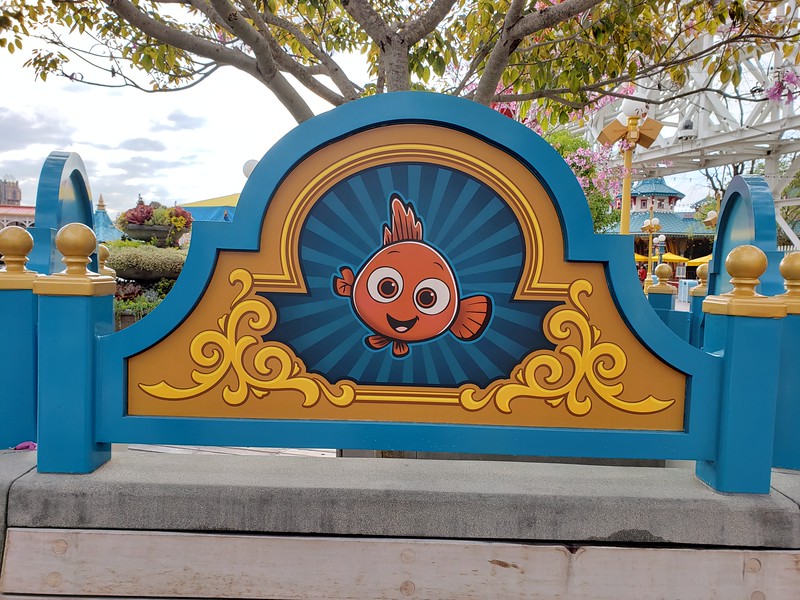 Not much different on INSIDE OUT: EMOTIONAL WHIRLWIND since last week. 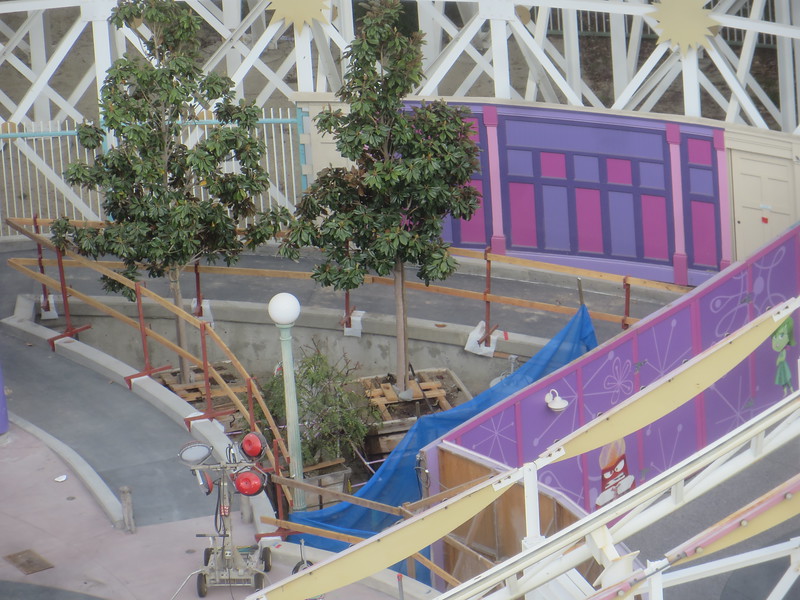 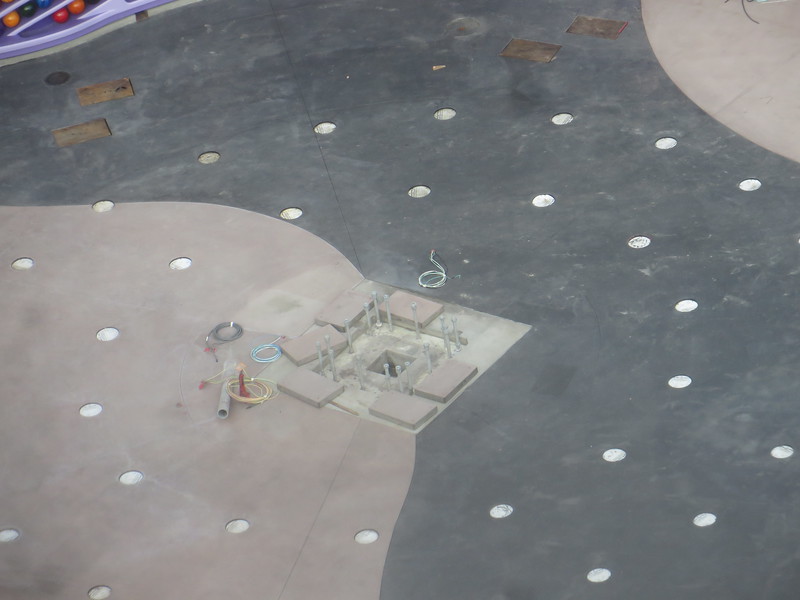 Speaking of spinners, Silly Symphony Swings site has looked virtually identical the past few weeks while the attraction is under refurbishment.

Food and Wine has just a few precious days left!

If you missed it last week, the Disney Environmentality Art Challenge has returned once again with art projects crafted by Cast Members from around the Resort.

The Mad Hatter on Main Street remains open during its refurbishment.

Heading over to Adventureland, something looks different.

The big ADVENTURELAND marquee has been removed. A new larger one will be added soon.

A smaller temporary sign welcomes guests into the land.

The little hut that took up a portion of the walkway has been removed.

Giant crates cover up the foundations of the former sign near the Tiki Juice Bar.

The walkway is decidedly much wider and open now.

Rosita is still on vacation.

I’d rather have this cutlery. Don’t remember these when Tropical Hideaway first opened, looks REALLY nice. Love these colors!

Bonanza Outfitters is still behind walls.

Looks like work continues on the newly removed planter. Strollers have already begun invading the space.

So cute! Fun graphics on this popcorn bucket. 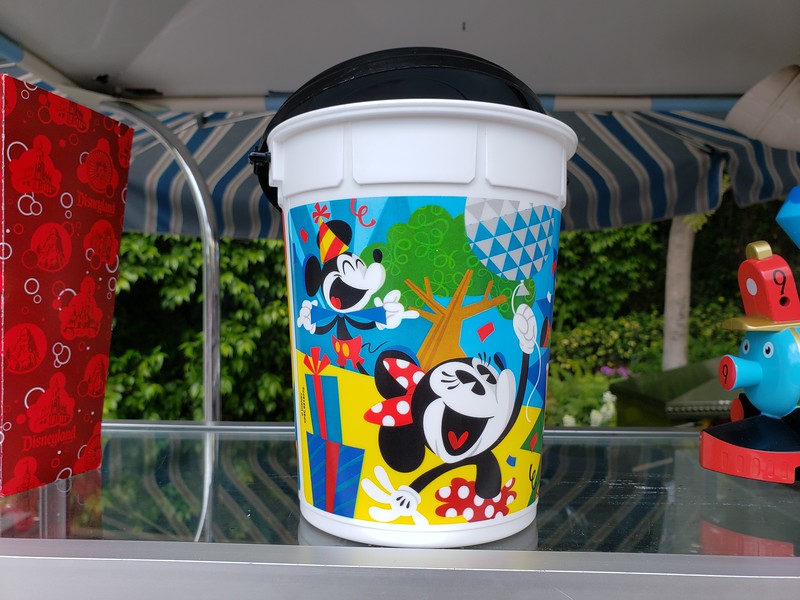 Ducktales novelty glass above plus Mickey novelty mug below.

Close up of the magic.

A cross section of the masterful creation.

The Casey Jr. train comes with popcorn and the Dumbo sipper comes with choice of Frozen Lemonade or Apple Juice.

We opted for half and half.

Roger Rabbit’s Car Toon Spin had no wait in the middle of the afternoon. Nice crowd levels all around the parks.

Pluto had to investigate the sounds coming from the Toon Town fountain. pic.twitter.com/hGnfbT36F9 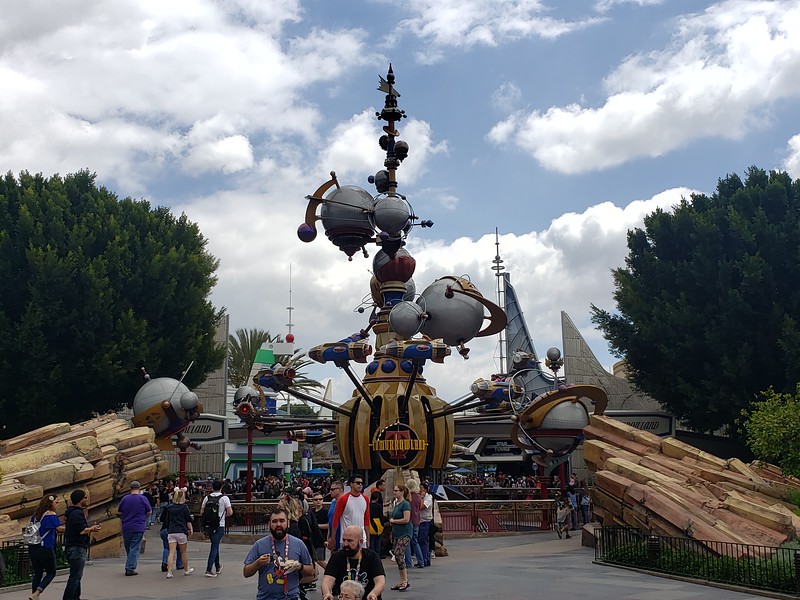 Looks like guests will be led into the first floor of the structure for security screening and tram boarding.

Pavers have already start appearing on the new walkways. 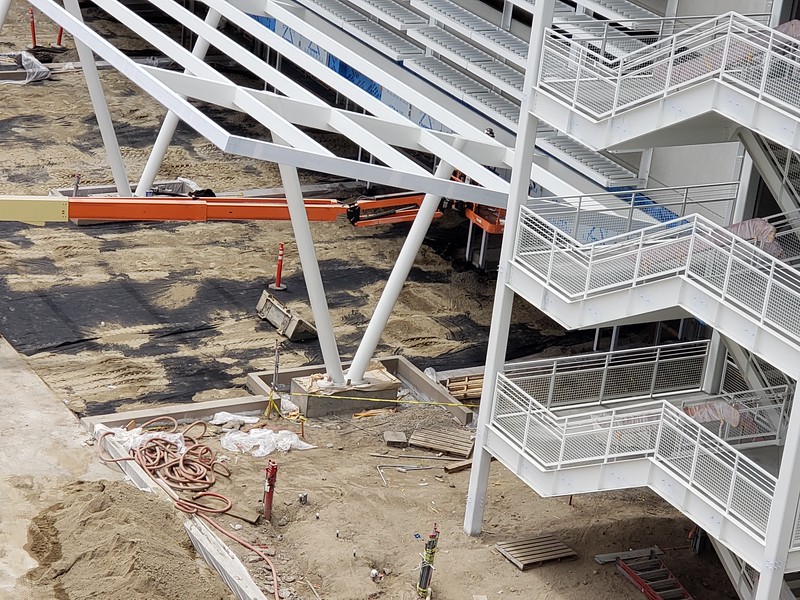 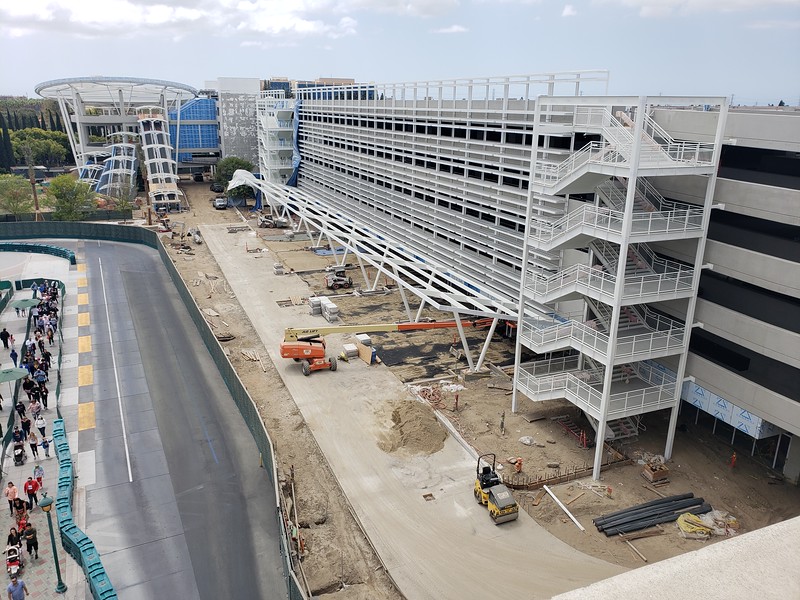 Looks like lines have already been striped for the parking spaces. 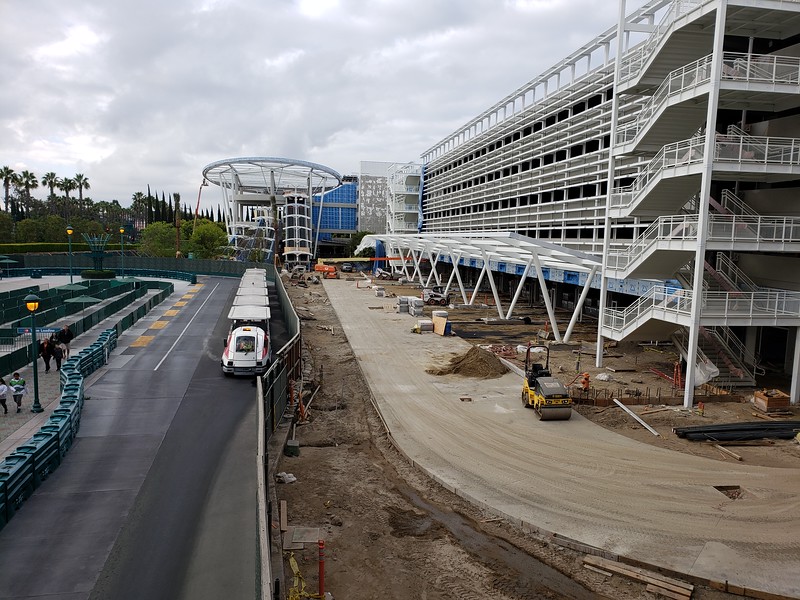 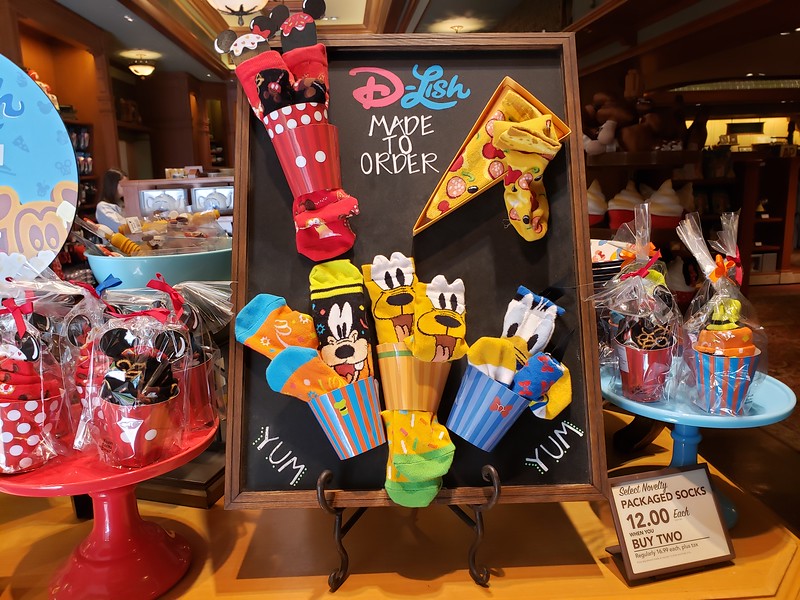 In celebration of Earth Day on April 22, the Disney Environmentality Art Challenge has returned once again with art projects crafted by Cast Members from around the Resort. If more than 5,000 votes are received by guests and cast members, the Disneyland Resort will light the more than 10,000 energy-efficient LED lights of the Pixar Pal-A-Roundattraction in green on Earth Day.

Food and Wine Wrapping Up

It can be overwhelming to try and process all the things to see, do, eat, and drink during Disney California Adventure Food & Wine Festival so that’s why we’ve assembled this handy guide to help you find your way through it all!

But wait, there’s more! Fresh tastes abound this year and we’ve got a great look at what you can expect to enjoy from the Festival Marketplaces in 2019. BON APPETIT!

Disney recently confirmed April 26, 2019 opening (daily after that from 10 AM to 9 PM) for the new Pop-Up Disney! A Mickey Celebration and tickets are available for sale now!

Disney Channel Fan Fest is coming back once again to Disney California Adventure on Saturday April 27, 2019. The event gives fans the ultimate change to see many of their Disney Channel favorites live and in person with interactive main stage sessions, Q&A, presentations by talent and creators from Disney Television Animation, musical performances, sneak peeks from the highly anticipated Disney Channel Original Movie “Descendants 3” and more.

Some recent changes at both Disneyland Resort and Walt Disney World resort caught national media attention when Disney policy updates for stroller sizes, smoking areas (or lack thereof), and loose ice! The rules will be going into effect on May 1, 2019.