FULL GUIDE: What to eat at Toadstool Cafe in Super Nintendo World at Universal Studios Hollywood 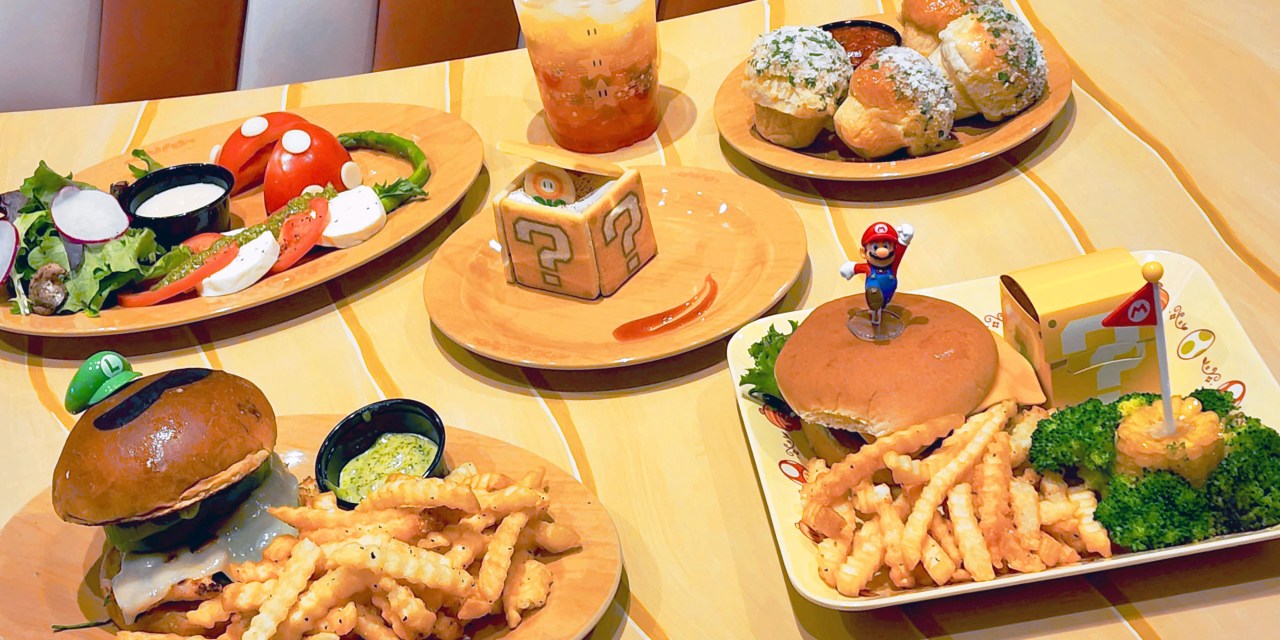 Here’s what you can expect at Toadstool Cafe in Super Nintendo World starting February 17, 2023. Letsa go!

Toadstool Cafe is setup inside of Toad’s home where he’s crafted some of the Mushroom Kingdom’s best dishes. Similar to what Disney guests might be familiar with at Be Our Guest Restaurant in the Magic Kingdom, you order your food first and are then seated. Universal takes it up a step further; once you have ordered, a host or hostess will take your party and seat you in the restaurant. This helps cut down on table hoarding ensuring a smoother process. You’re given a little numbered tracker so that staff are able to bring your food directly to your table.

The restaurant is over-the-top cute. All the windows are viewports into the goings on in the Mushroom Kingdom (be on the lookout for an attack from an ominous airship) and there’s even a window into the kitchen where all the food is being prepared. Providing both substance and style, everything about this location works in beautiful harmony. From the greeting by Toad at the entrance to the food presentation and flavors, it all comes together so very nicely.

Even more points get added on for the use of real silverware and adorable themed printed plates. Even the napkins are branded here and every single effort is not only noted but appreciated and frankly, needed. We sincerely hope that these amazing touches don’t get value engineered away from the land. It’s a top-notch experience. 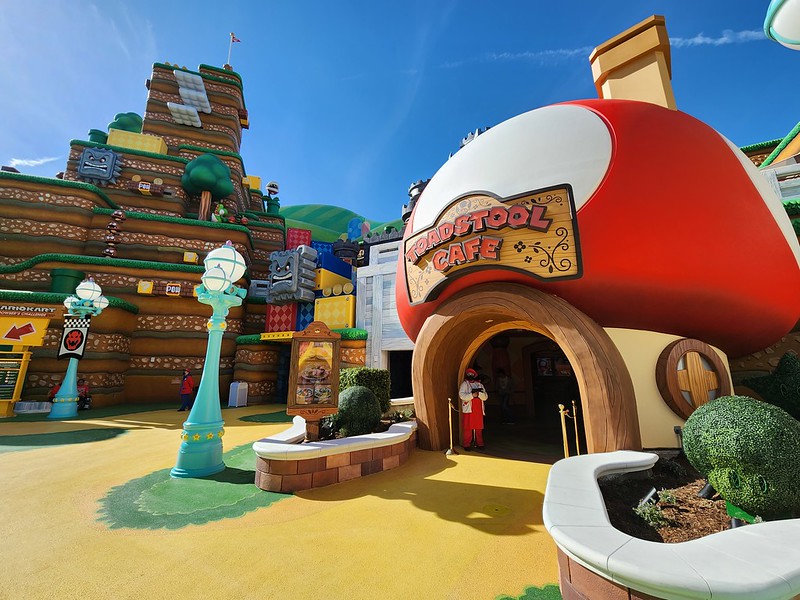 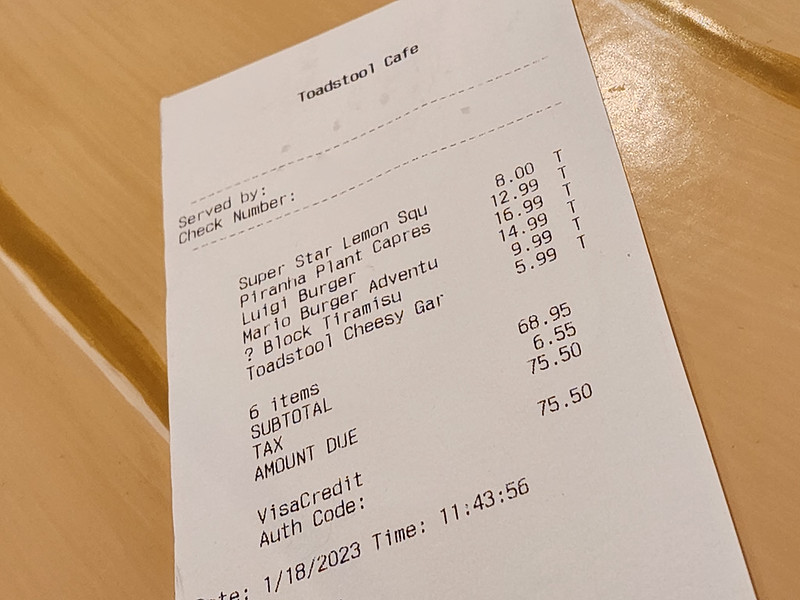 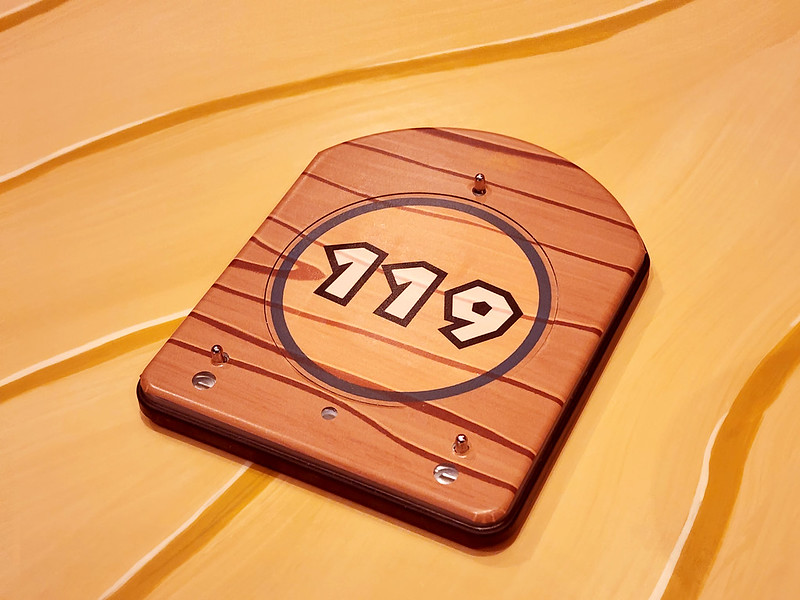 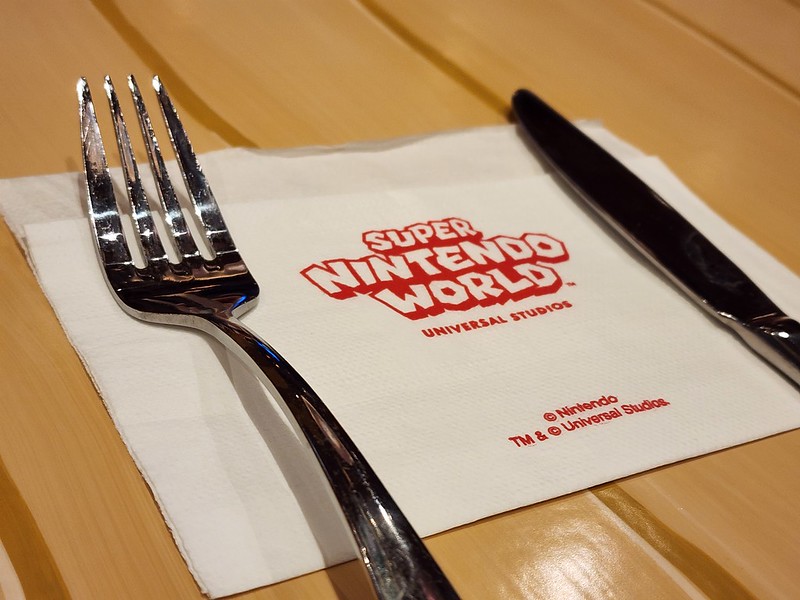 The location is hyper-themed — from the restaurant interiors to the food itself.

Even the plates are stupid cute.

We all love a good themed trash can, right? 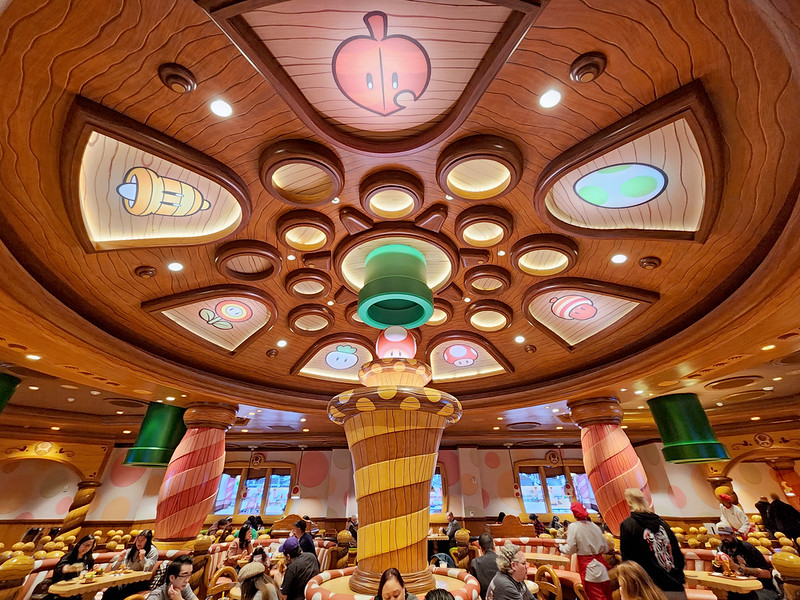 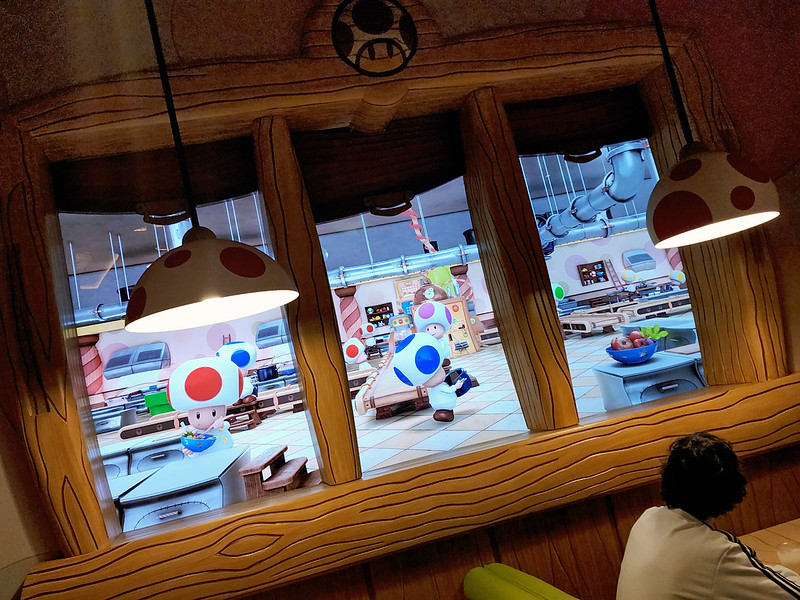 Piranha Plant Caprese ($12.99) is described as tomatoes, fresh mozzarella, asparagus, and basil pesto served with mixed greens, shaved radish, and apple vinaigrette. The flavors here are really fantastic, your mileage will vary based on the freshness of your produce but ours was great and although the apple vinaigrette was VERY sweet, we found it to be a most excellent pairing with all the freshness in front of us. You won’t want to try to make a meal out of this though as it’s not terribly substantive. This dish is both gluten-free and vegetarian. 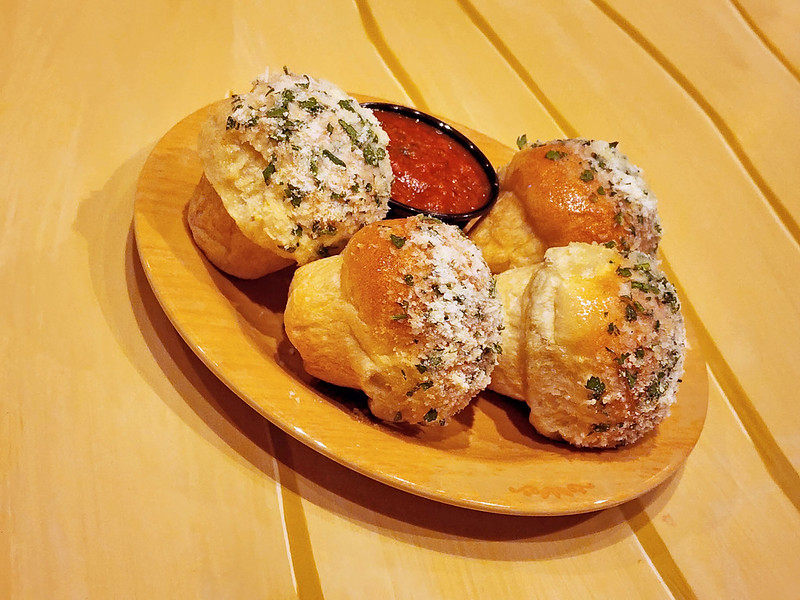 Toadstool Cheesy Garlic Knots ($5.99) is described as mini mushroom-shaped knots brushed with garlic butter, parmesan cheese, parsley and a side of marinara sauce. These didn’t knock our socks off although the cheese and seasoning on top was a nice touch and it paired well with the warm marinara dipping sauce. This dish is vegetarian.

Yoshi’s Favorite Fruit and Veggie Salad ($13.99) is described as mixed greens, star fruit, strawberries, blueberries, radish, mushrooms, tomato, cucumber, Yoshi egg croutons and raspberry vinaigrette. The dressing is quite sweet but it combines well with fun ingredients that you don’t often find in a regular theme park salad. This dish is vegetarian.

Mario Mini Burger Adventure Set ($14.99) is described as single-patty cheeseburger, French fries, corn on the cob, broccoli and a gold coin cookie. Color us shocked that our favorite overall meal would be for KIDS! There’s nothing complex here about the flavors but it’s just a perfect presentation. Aside from including both fires AND veg for a good balance, this meal also has a tasty cheeseburger plus cute little decoration pieces and a fun (although not very tasty) white chocolate covered cookie! A million points for presentation, this is a winner.

Mario Burger (Bacon, Mushroom & Cheese) ($16.99) is described as an all-beef patty with bacon, mushrooms, lettuce, tomato, and American cheese served on a brioche bun with a side of truffle French fries. You know exactly what you’re getting here. The burger is pretty straightforward as far as theme park sandwiches go and there’s nothing particularly remarkable about the patty itself but all the fixings (and those addicting crinkle cut fries) make this one very satisfying munch. 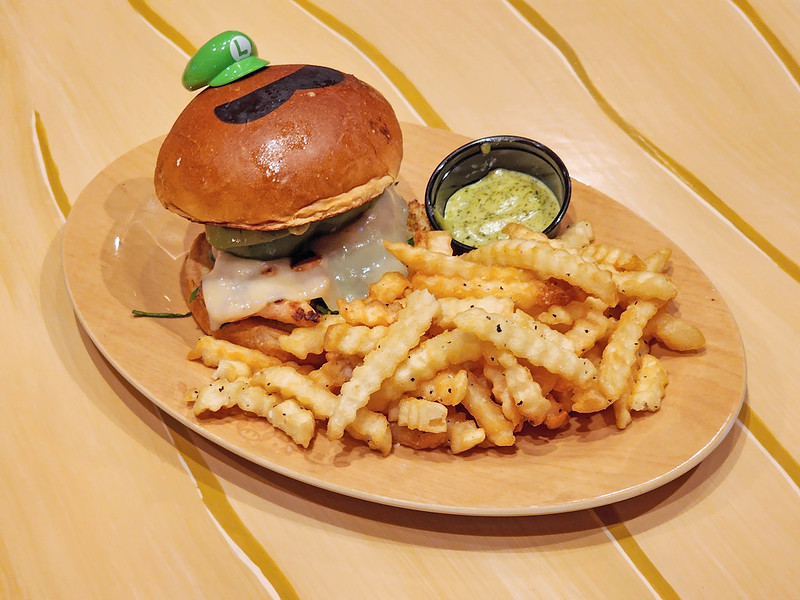 Luigi Burger (Pesto Grilled Chicken) ($16.99) is described as grilled chicken, basil pesto, Swiss cheese, and basil served on a brioche bun with a side of truffle French fries. This was quite delicious. We’re not big fans of green bell pepper so we were surprised to see two giant thick slices but, they were sauteed slightly which helped mellow out their flavor and they actually made a perfect addition paired with the zesty pesto. Plus those (lightly flavored) truffle fries? Winning!

? Block Tiramisu ($9.99) is described as tiramisu-flavored mystery block with a white chocolate Power-Up inside. It’s so effective in its simplicity. If you DON’T love coffee this is a great one as the coffee flavor is very subtle. The shortbread cookies that make up the sides are also perfection plus a little white chocolate Fire Flower Power-Up. The Fire Flower fireball raspberry sauce on the side was a fun touch. This dish is vegetarian.

Fire Flower Spaghetti & Meatballs ($16.99) is described as spaghetti with mushroom marinara sauce, meatballs, Fire Flower parmesan crisp, shaved parmesan, and chopped parsley. This is another straight forward dish, no surprises here. Good flavors in the sauce but nothing amazing. The meatballs were a little inconsistent — some were firm, others less so.

Mt. Beanpole Cake ($9.99) is described as multi layered Italian cookie cake with a matcha mousse. This wasn’t a winner with our group. Despite tens across the board for presentation, the cake was a little hard and not terribly satisfying. It’s very light otherwise and the combination of flavors almost gives this a sort of Neapolitan bite. This dish is vegetarian.

Super Star Lemon Squash ($8.00) is described as honey lemon soda with mango stars and assorted tropical bobas. This is exactly the fun, sugary, and tasty theme park silliness you expect from themed food and beverage options. We loved everything about it from the adorable printed disposable cup and tasty soda to the assorted little chopped jellies and exploding popping pearls that we slurped up with a big fat boba straw.

Recommended for guests ages 9 and under.

We’ve got a bunch of news and info about Super Nintendo World at Universal Studios Hollywood, click the map below to learn more!

MORE INFO: See all of our coverage of Super Nintendo World at Universal Studios Hollywood 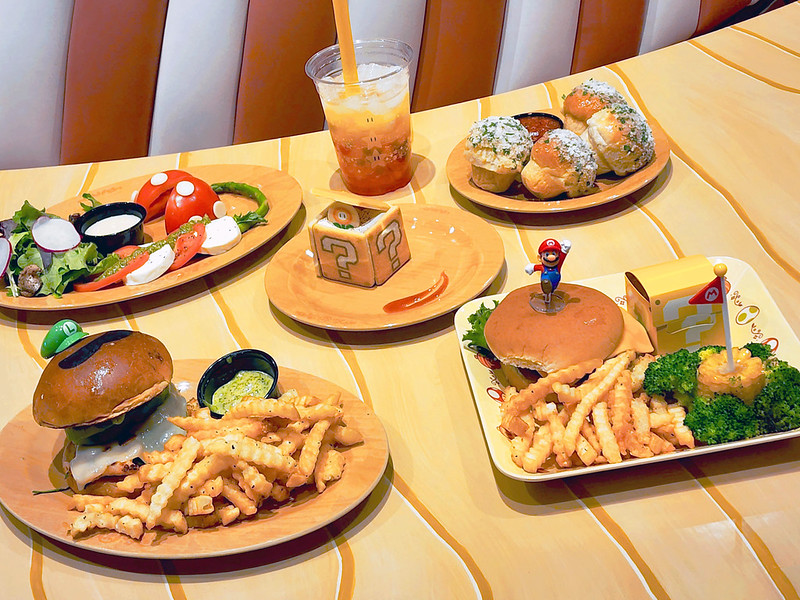 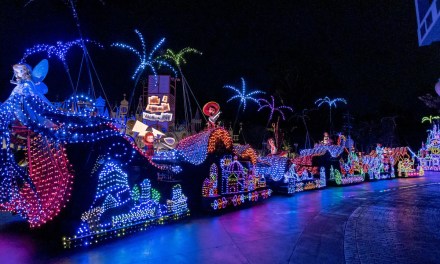