WHAT TO WATCH: Navigating the new original content on #DisneyPlus

Disney+ is here! Sure, you’re probably going to be diving head-first into a myriad of favorites catalog of Disney, Disney Channel, Disney Animation, Pixar, Marvel, Star Wars and Muppets but if you’re looking towards all of the new and original content then you might need a heading.

Luckily, we’re your golden compass thanks to a little help from some sneak peek screeners that we were given the opportunity to review. Whether it’s live or animated, scripted or docu-style, we have you covered on some the most high-profile projects that all debut together with the streaming service starting tomorrow! UPDATE: Disney+ launched around 9pm for Android devices and we’ve been busy little mice catching up on all the original content on the platform!

Ready to live on the Plus side of life? Let’s take a look…

An incredible expansion into the STAR WARS universe. If you loved ROGUE ONE because of the thrill it brought; high stakes, big risk, uncertain terms, unpredictable situations, then you are in for a RUSH with the very first live-action series created in this Galaxy far, far away. Our unmasked, unnamed, (anti) hero manages to mess up a cantina, detach one of his foes from his legs, freeze a prisoner in carbonite and then hop to a cantina on another planet… all within the first 13 minutes of the first 39 minute episode. Then the real trouble picks up. This show is absolutely stunning in its scope and breadth and we cannot wait for the next episode to debut!

Yes, yes, yes. If you’re a Disney Parks fan then a million times “yes.” The first episode establishes the entire formation of Walt Disney Imagineering and expands on its legacy over the years with loads of fantastic vintage footage and interviews (new and old) with a myriad of Disney notables including Marty Sklar, Dick Nunis, Bob Gurr, and more. The episodes clock in at about hour each and the entire six-hour saga is under the helm of director Leslie Iwerks who seems to have a by-the-fans for-the-fans mentality here. Angela Bassett provides narration, lending a strong yet warm personality to the piece that is sprinkled from end to end with visuals new and old that you will absolutely not want to miss.

This gets a top ranking and its not even movie or show! SparkShorts are actually a collection of animated short films created at the house of lamp via the new program aimed at improving the overall strength of the studio’s portfolio with a two-fold goal of showcasing diverse storytellers and also exploring new and efficient production methods for completing projects. Earlier this year, Pixar released a trio of the new shorts to YouTube. You can find our thoughts (and watch the full shorts) for Purl, Kitbull, and Smash and Grab. If you want any more though you’ll need a Disney+ account to catch three others still in production for launch on the platform including Float.

Tim Federle (Ferdinand) has created a surprisingly meta take on the High School Musical franchise, which peaked some time in 2007 and at the time felt like would never die (it did though!). Here the “real” students of East High are auditioning for the new drama teacher (Broadway vet Kate Reinders), who is putting on High School Musical. Ricky (Joshua Bassett) and Nini (Olivia Rodrigo) lead the mockumentary-style series as former lovers who might end up being cast as the leads despite their personal drama. Silver-voiced jock EJ (Matt Cornett) is the fly in the ointment for Ricky, and the pilot episode sets up plenty of lighthearted teenage drama to accentuate with the songs we all know and love from the original DCOM. Shout-out to Dara Renee as Kourtney, who we’re hoping gets much more screentime going forward. The second episode provides more places for the story to go – anyone looking for a clean, song-filled alternative to CW soapy dreck that’s suitable for preteens will be happy with High School Musical: The Musical: The Series. 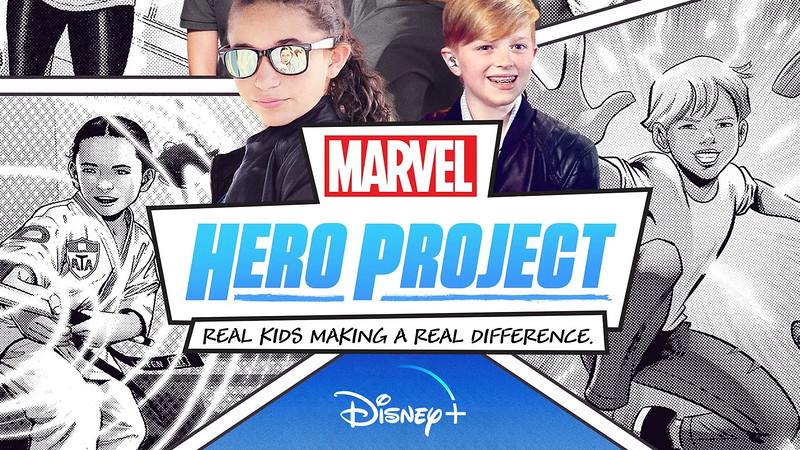 This new docu-series is a surprisingly inspiring and uplifting episodic venture with Marvel New Media chronicling different kids who have become heroes in their own rite. The very first episode brought tears and feels of empowerment as we followed Jordan Reeves, a bright young inventor with a limb difference that inspired her to find new paths to success. Future episodes feature kids who help loved ones with Alzheimer’s make connections through puzzles or grow an urban garden to feed the hungry, etc. These super kids are surprised by Marvel as inductees into the Marvel Hero Project which includes a custom comic made of THEM showcasing their heroic contributions in their communities. It’s ever-so-slightly over-produced with obviously staged moments and heavily edited interactions but the heart of the show is solid gold.

LADY AND THE TRAMP

The latest live action remake of a Disney animated classic is exclusive to Disney+. Lady and the Tramp is sweet, charming, even a bit slow-paced compared to most current fare – and that’s not a bad thing! Some elements of the original are shuffled or jettisoned (bye bye Orientalism!), but the spirit is all here, with the dramatic climax sure to bring a tear to every dog lover in earshot. Director Charlie Bean (Tron: Uprising) makes his live action debut with a steady hand. Tessa Thompson (Thor: Ragnarok), Justin Theroux (The Leftovers), Janelle Monáe (Hidden Figures), Sam Elliott (A Star is Born) and the rest of the voice cast do fine work, while Kiersey Clemons (Austin & Ally) and Thomas Mann (Kong: Skull Island) are charming as Darling and Jim Dear. Standing out, as always, is the divine Yvette Nicole Brown (Community) as pompous Aunt Sarah. The whole project is elevated by John Myhre‘s exquisite production design, lending the same detailed period warmth he provided to Mary Poppins Returns.

If you’re a fan of Anna Kendrick then you’ll be drawn to 50% of the charm of this movie where she plays the daughter of Santa. Pair her with Bill Hader as her brother (who is hesitantly following tradition to assume the Santa mantel) and throw in a little Billy Eichner and some Shirley MacLaine and you’ve got a recipe for a Christmas movie that delivers holiday cheer and some solid laughs but not necessarily a strong contender for yearly Christmas tradition. Borrowing on many a tried and true holiday trope, the film relies heavily on Kendrick’s effervescent charm but doesn’t bring much more to the holiday landscape.

Kristen Bell (Frozen, The Good Place) executive produces and shows up as on-screen cheerleader for casts of real high school musicals that reunite later in life to remount their memorable productions. The first episodes showcases the Santee High School 1996 cast of Annie, and Broadway director Marcia Milgrom Dodge (the phenomenal 2009 Ragtime revival) whips them into shape to perform the old chestnut for their friends and family. The goal here is to be uplifting, but it’s hard not to feel the sadness that shines through for some participants – dreams that didn’t pan out, high school romances that ended in heartbreak, and a Deputy Sheriff who is reluctant to shave what little hair he has left. Musical director and conductor Adam Wachter (Submissions Only) steals the show a few times. More reaction cuts to Adam please!

Pixar in Real Life is a fun concept but the 6-minute premiere “episode” feels like something better suited for social media or YouTube than on the for-pay streaming service. The trailer for this promises some really fun opportunities to take the worlds inspired by Disney-Pixar films and bringing them to life but it somehow feels misplaced in spirit on Disney+. The premiere episode featured a control panel like the one in INSIDE OUT plopped in the middle of New York City where curious adventurers who helmed the panel could control the emotions of improv actors who were part of the pranks.

THE WORLD ACCORDING TO JEFF GOLDBUM

Noted eccentric and occasional actor Jeff Goldblum is sent all over to track down the origins and evolution of every day objects. This is kind of like a window-dressed version of the usual National Geographic how-it’s-made material, and while sometimes Goldblum adds to the proceedings, sometimes his presence is just distracting. Goldblum fans will certainly enjoy, but the level of interest you have in the topics presented – sneakers, tattoos, etc. – will determine how engrossing you find Goldblum’s tics and sly winks at the camera.

Amber Kemp-Gerstel and her Disney-inspired DIY projects are the focus of these short-form videos and they’ll be right up your alley if you’re into crafting with the whole family. Each episode promises one-of-a-kind crafts including one inspired by Dumbo’s circus in the first episode. The crafts are simple enough to follow with step-by-step instruction to create your own masterpieces. With an emphasis on families working together to create their crafts, it’s a nice concept but not quite for everybody.

Love him or hate him, Forky (Tony Hale) is dumb as box of rocks and in this odd little series of very short videos, his Toy Story pals explain the world to him. In the first entry, What Is Money?, Hamm attempts to explain the basics of econ to Forky. It’s kind of funny, but it’s another odd inclusion for a full-fledged streaming service. These feel like short social videos for Facebook or YouTube. Few families will object to more Toy Story content though, so knock yourselves out!