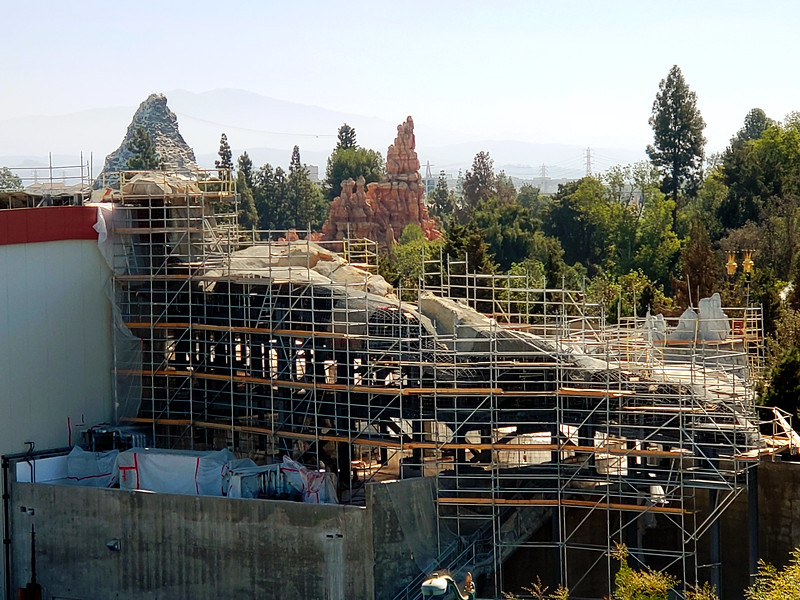 As we inch closer to October, Disney is already well into its Halloween Time celebration with decorations, entertainment, and food offerings to celebrate the season. But spooky pumpkins and ghosts are not the only thing causing a stir in the parks, there’s still a lot of on-going projects.

The new construction at Mickey and Friends Parking Structure continues to shoot upwards in anticipation of next year’s Star Wars: Galaxy’s Edge which itself is also still very much under construction.

Refurbishment projects continue around the park including Matterhorn Bobsleds and a slew of tree-removal and walkway widening initiatives; all to get ready for what promises to be a very busy 2019.

We’ll do some more Halloween Time menu tastings with photos and reviews plus we’ll have a little merch run for you at the very end. All of this and more in this week’s park pictorial. ENJOY!

Love the fall colors around Disneyland!

Refurb walls have come down on a lot of Main Street but they’re not quite finished yet!

Tree removal and shrinking of the pond continue in efforts to widen walkways around the park.

Planters at the entrance of Frontierland are also being minimized to open up more walkways.

Halloween Tree is looking incredibly sparse this year but the plaque has finally appeared: 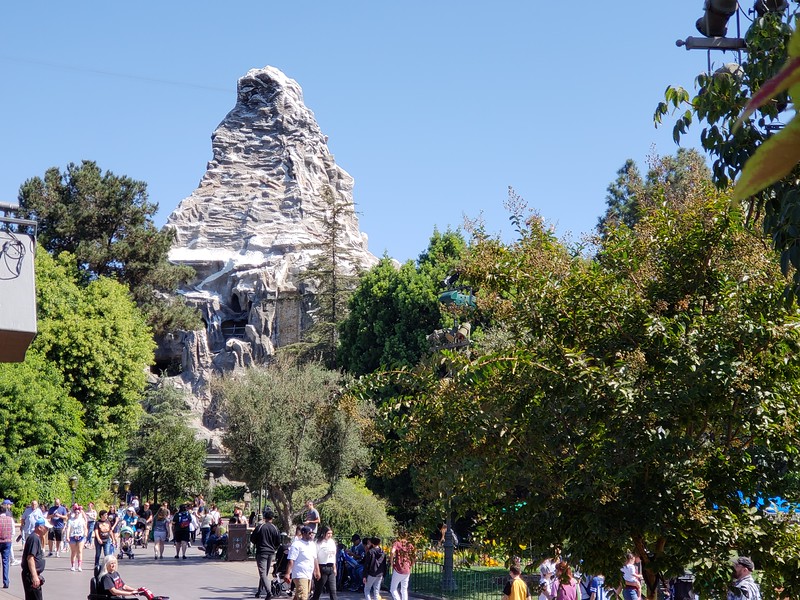 Matterhorn continues along in its refurbishment. 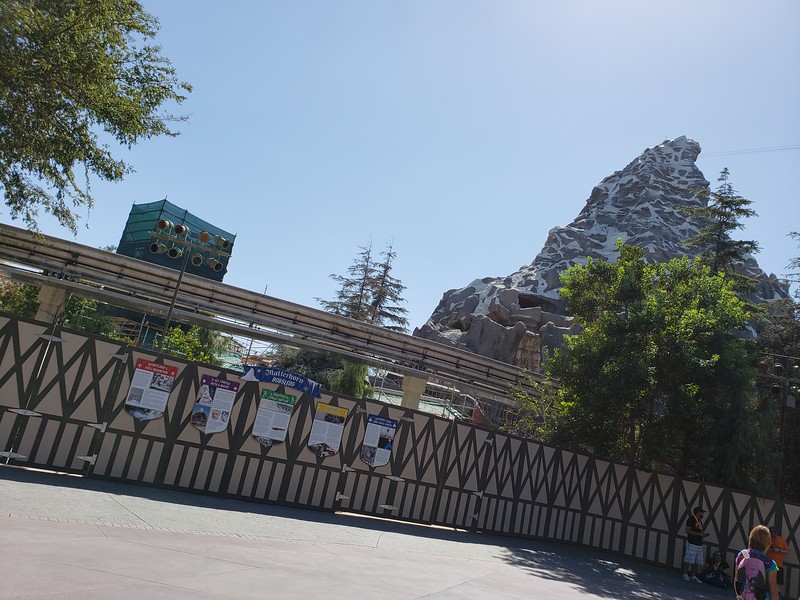 Looks like the chalet in the queue is getting some TLC. 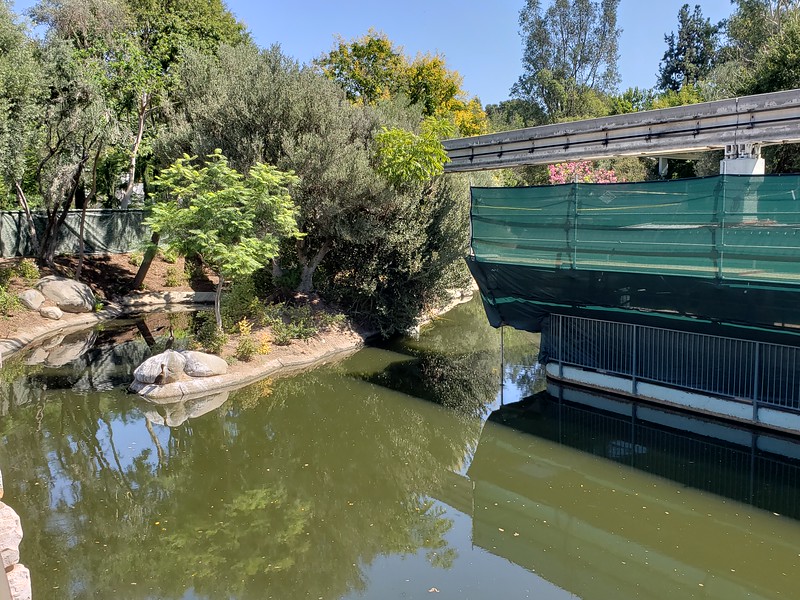 The former motor boat queue station, used now as a sitting and dining area is getting some work done. 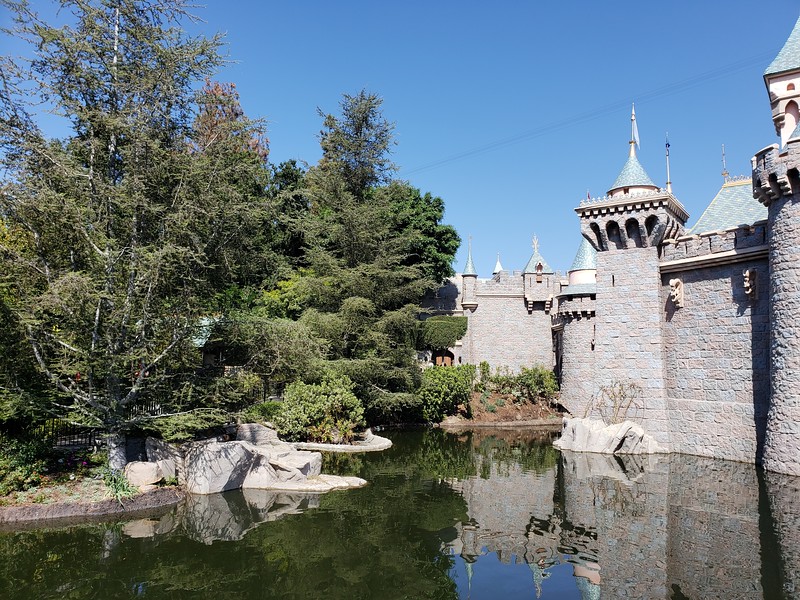 The refurb walls on the side of the castle are gone and so is the big tree that used to sit there… possibly opening up more projection surface on the castle?

Looks like the tables removed from the motor boat landing have been moved onto the Small World Promenade.

At least there’s new trees here helping make up for all the trees disappearing at Disneyland!

Looks like they finally finished the parade gate and the backstage portal.

Getting ready to welcome you to a Tropical Hideaway.

Early in the afternoon on Sunday, a fire alarm caused for the temporary evacuation of a large portion of New Orleans Square. Since so many facilities are technically part of the same building a flareup in one location forces the evacuation of everything in the area including Pirates of the Caribbean, Blue Bayou, Cafe Orleans, the various shops, and even Club 33! Thankfully, whatever caused the alarm appeared to be minor enough as everything resumed normal operation within the hour.

Since everyone was evacuating New Orleans Square, we high-tailed it for the hills. Chikapin Hill to be precise. We didn’t venture a voyage to get our new branded Ziploc bags but we did notice some trees are also missing over here brightening up the area a bit (and removing shade, too).

Even when Hungry Bear is full of diners, there’s still a quiet serenity along the river. Should be interesting to see if that remains once Star Wars: Galaxy’s Edge opens up next year!

Jack and Sally were impressed by Becca’s Skellington-inspired nails. Jack said he loved how she decorated her fingers and invited us to check out how he wrecked the halls at the Haunted Mansion.

We took Jack up on his offer. 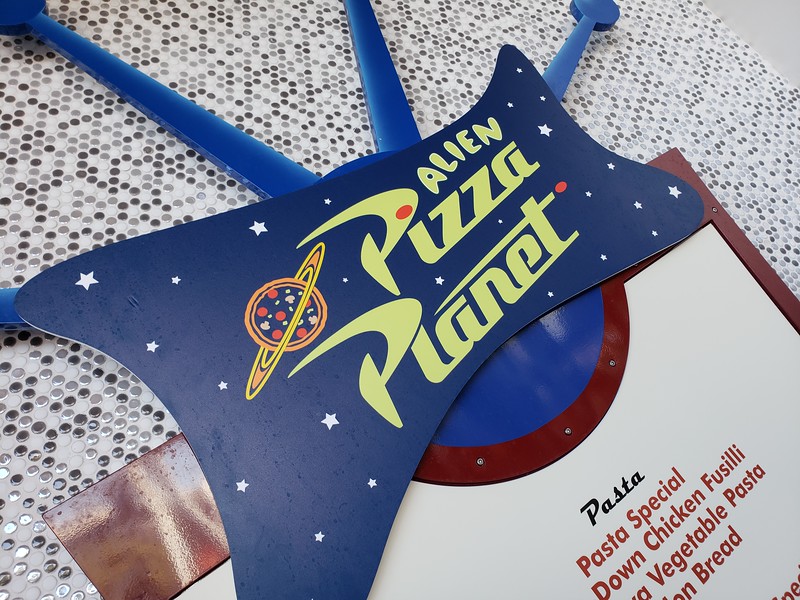 Our Halloween Time lunch journey was a little bit of a jaunt. Join us for the food tour. 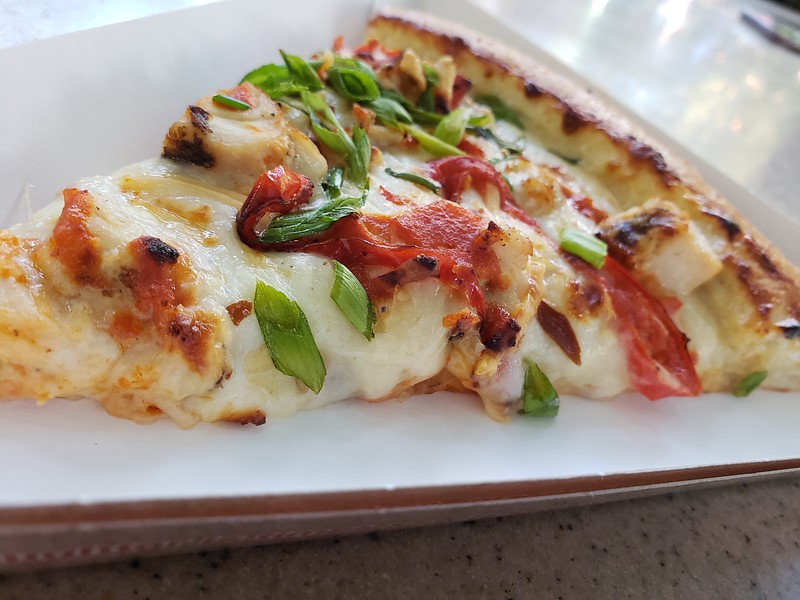 I was supremely disappointed by this on just about every level. When something is advertised as being garlic-flavored, I want garlic seeping from my pores within the hour. There’s hardly any garlic flavor here making this just as ineffective at warding off vampires as it is to satisfy your hunger. Especially considering the price tag, I would strongly advise skipping this Halloween Time offering.

For just a little more than what you’d pay for the disappointing slice of pizza, you get a delicious and quite spicy sausage topped with a bunch of savory goodness and paired with a side of amazing filmstrip fries. Wasn’t expecting to be excited by a hot dog but it was great! If you’re a spice wimp you should skip. It’s not incredibly spicy but it packs more of a kick than you might expect from a Disney dog.

The pumpkin spice drizzle is delicious and the whip cream, come on! What really suffers here, as with other various of Funnel Cake Fries that we’ve had at this location is FRESHNESS. Much like McDonald’s french fries, Disney’s funnel cake fries are meant to be enjoyed IMMEDIATELY otherwise they lose their texture and flavor profiles rapidly and they become chewy and not very enjoyable. So while the flavors are good do yourself a favor and mobile-order these only when you’re ready to actually eat them. If they sit next to your food for 10 minutes they will not taste very good. 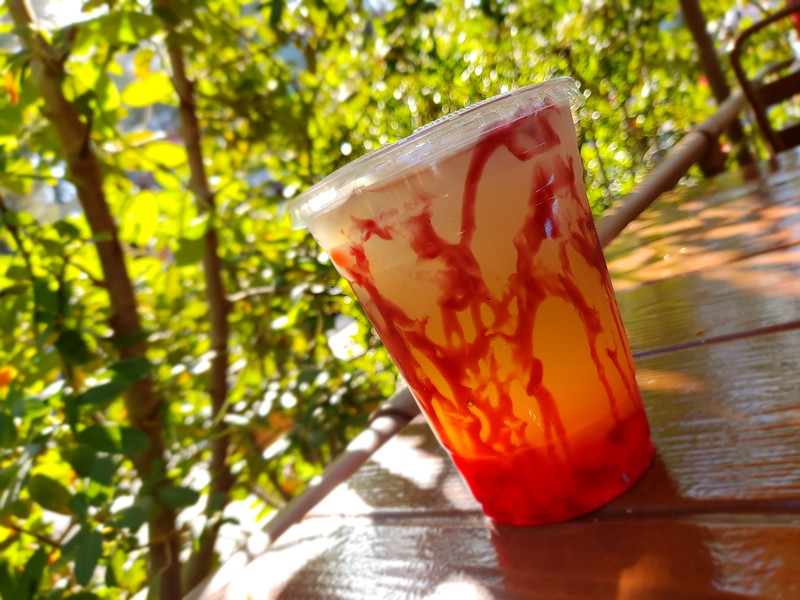 The flavors here are really good. The drink is quite sweet just shy of overbearing. I’m a sucker for popping pearls and they add a lovely texture and additional flavor burst to this drink. The price tag is a little heavy but it’s definitely got a lot going on.

So much to eat! See our full pictorial for more info and details!

Love these jack-o-lanterns on Carthay Circle, I wish they were the basis for decorations in Buena Vista Street! So creepy and quirky and cool! 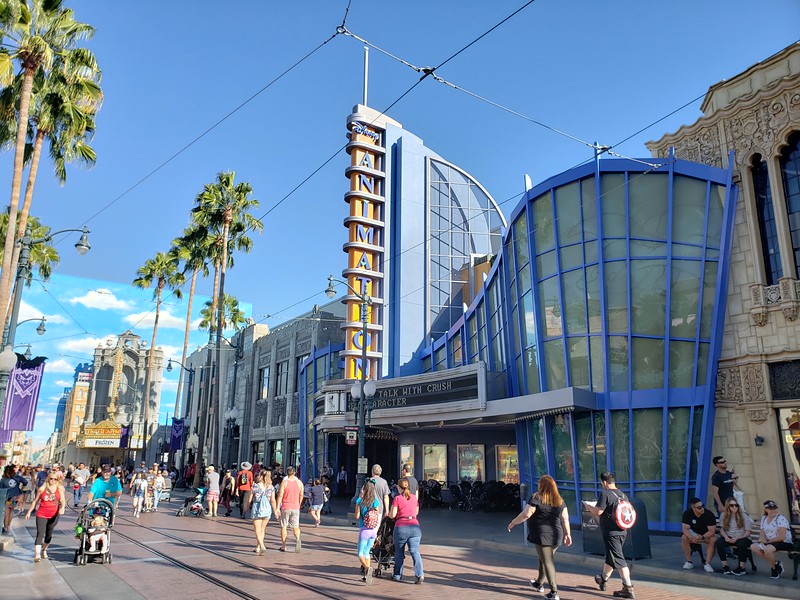 Walls are finally down on Disney Animation. Doesn’t look like any major changes were done other than refreshing paint. 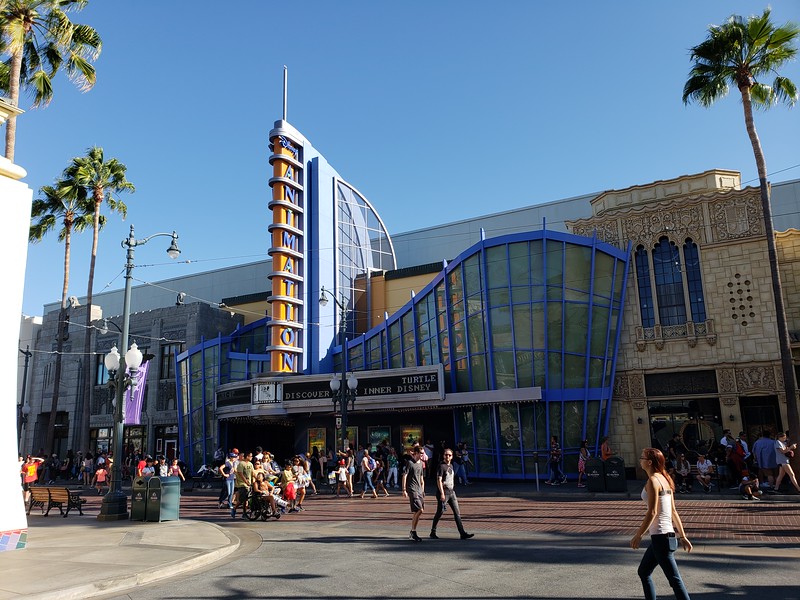 Disney has announced an exclusive extended peek coming to Disney Parks for THE NUTCRACKER AND THE FOUR REALMS.

MORE INFO: Sneak Peek coming to Disney Parks for THE NUTCRACKER AND THE FOUR REALMS

How cute is this?!

This camera is not even trying to blend in.

“a bug’s land” sign has been removed as they make way for the new Marvel-themed land. 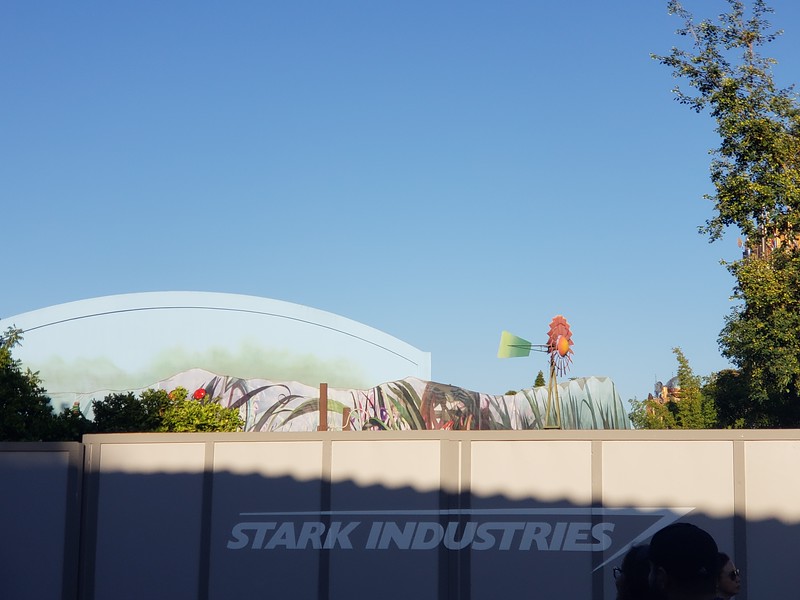 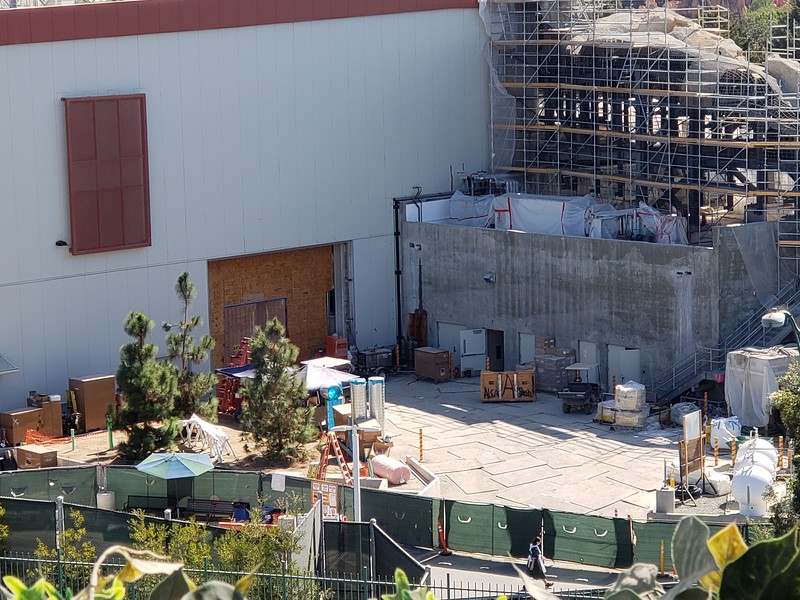 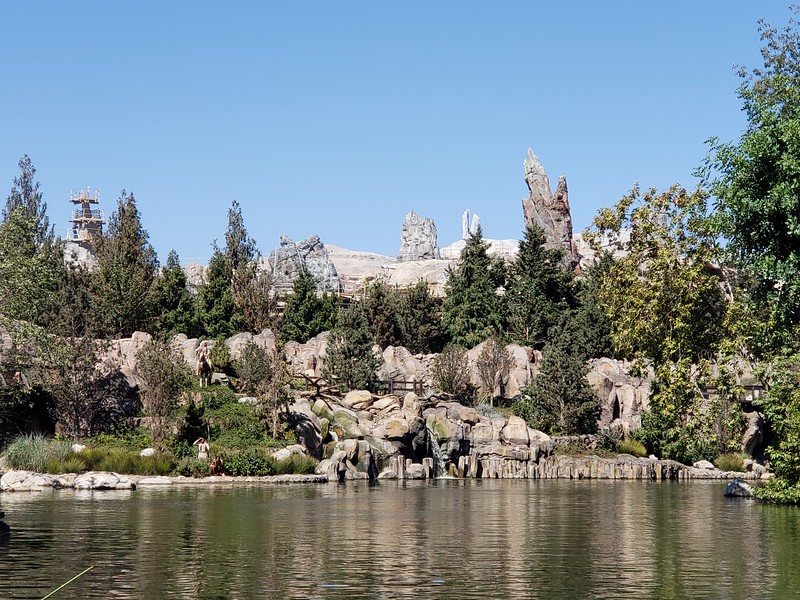 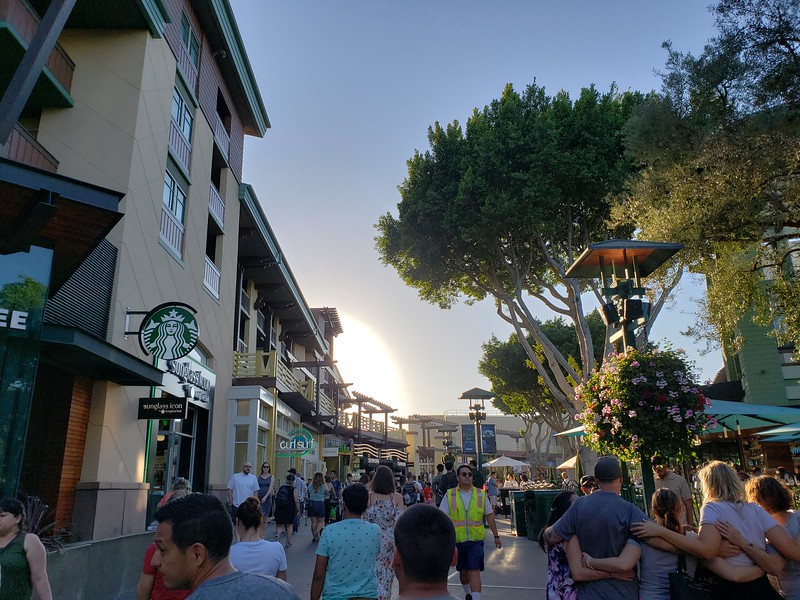 It’s possibly not super easy to tell on first glance but Downtown Disney‘s existing buildings are getting a brighter pop of color on the facades. Unless this is a primer base coat, it seems the new look is decidedly much brighter than before. 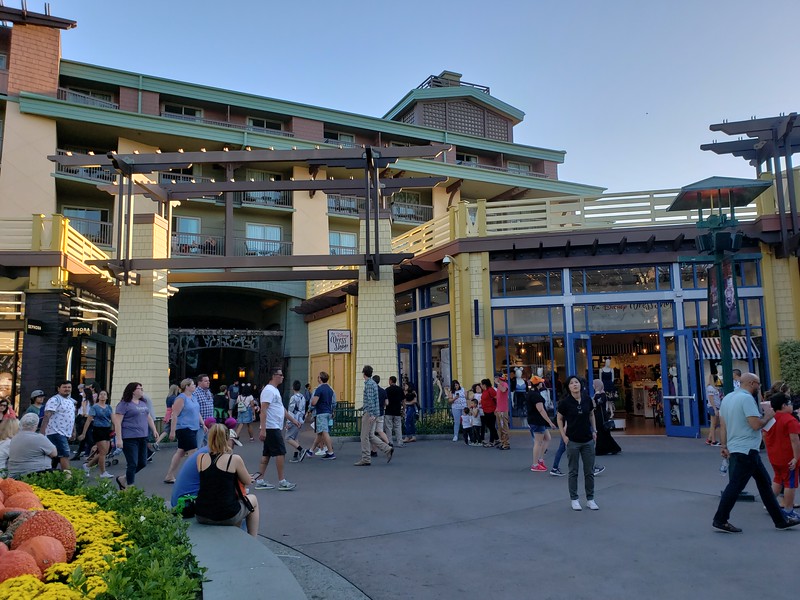 More walls have come down around Naples opening up the area a little more.

The upper dining area has reopened with a refreshed outdoor patio, as well.

Salt & Straw is also coming rather quickly along.

Wetzel’s Pretzels still has a ways to go. 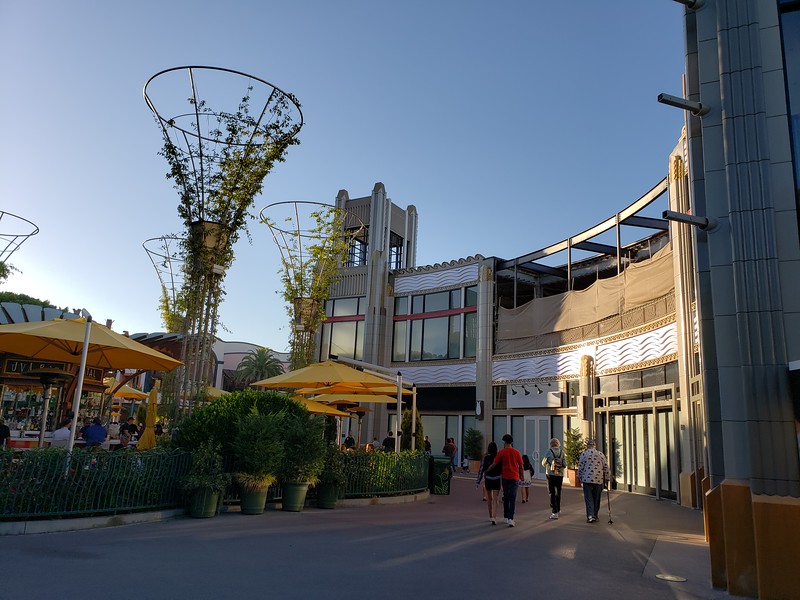 Ballast Point and Blackcraft also continue to move along.

Earl of Sandwich is confirmed to be returning to operation soon.

A great gathering of a ghostly group performing a capella. Wish they had this on Buena Vista Street!

The Disneyland Hotel firepit is getting some TLC.

Tangaroa Terrace is closed and will reopen as a slightly modified location offering alcohol in addition to food.

Trader Sams next door remains open and has adjusted its menu to account for the lack of offerings from Tangaroa Terrace closure.

The new parking structure at Mickey and Friends continues to rise. 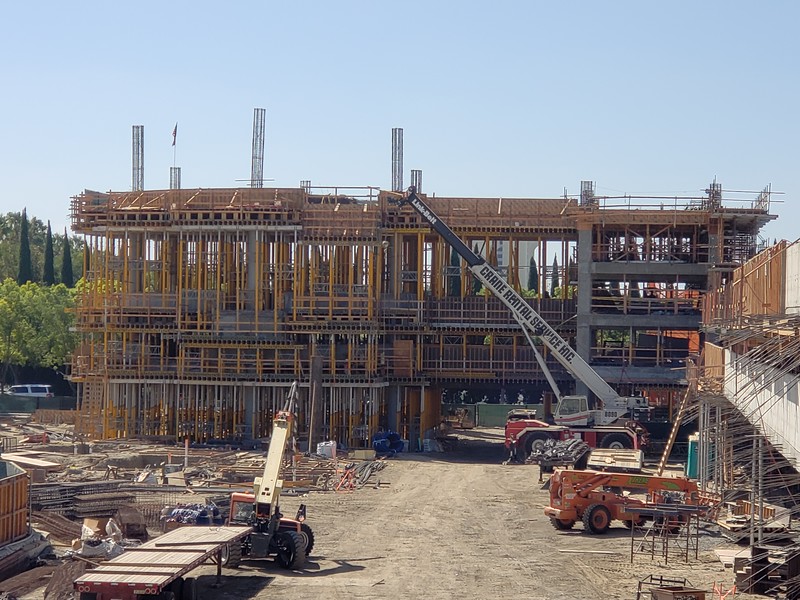 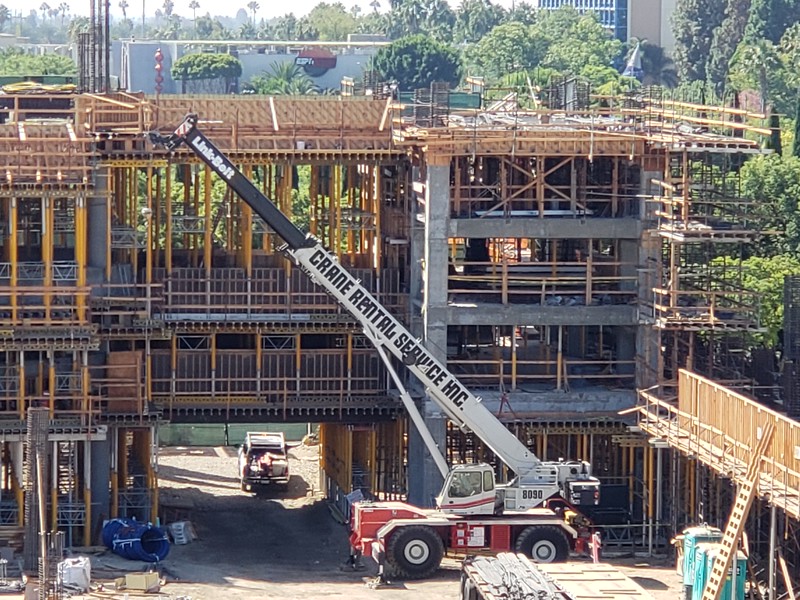 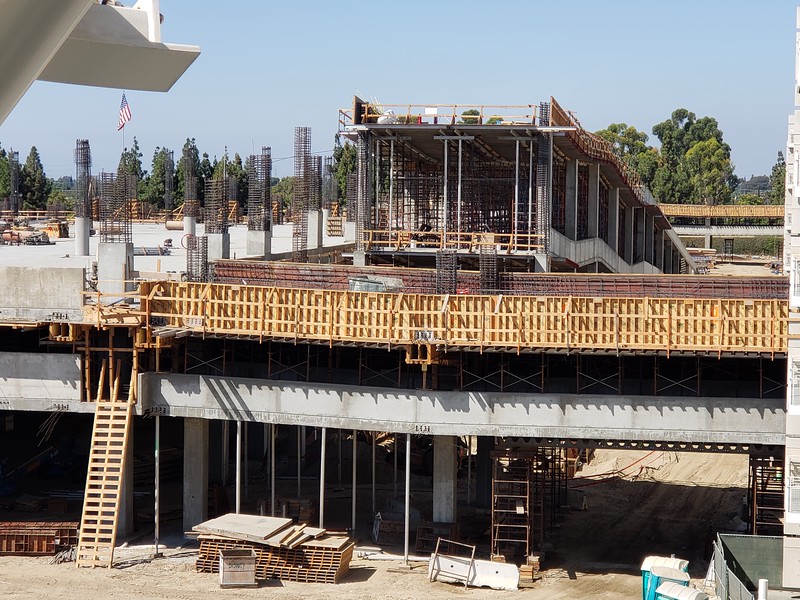 It appears that second and third levels will be connected with a single-lane driveway and a protected walkway. 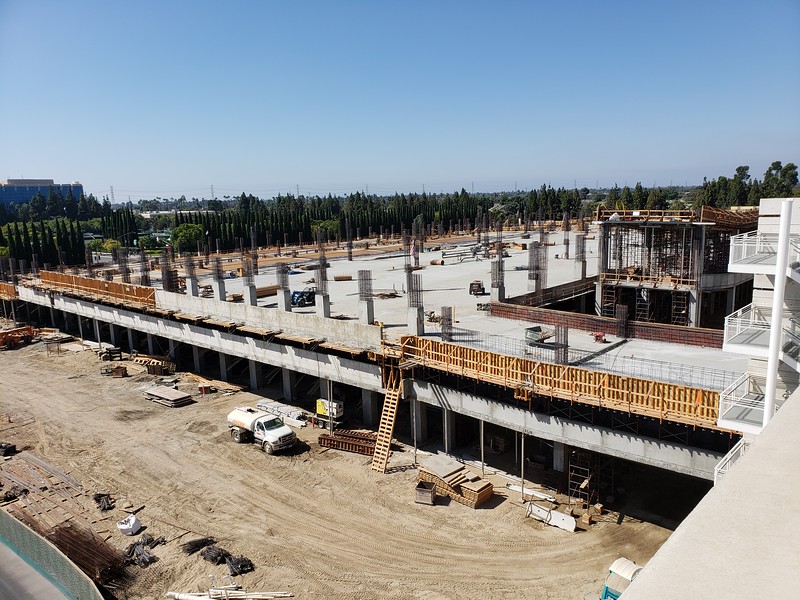 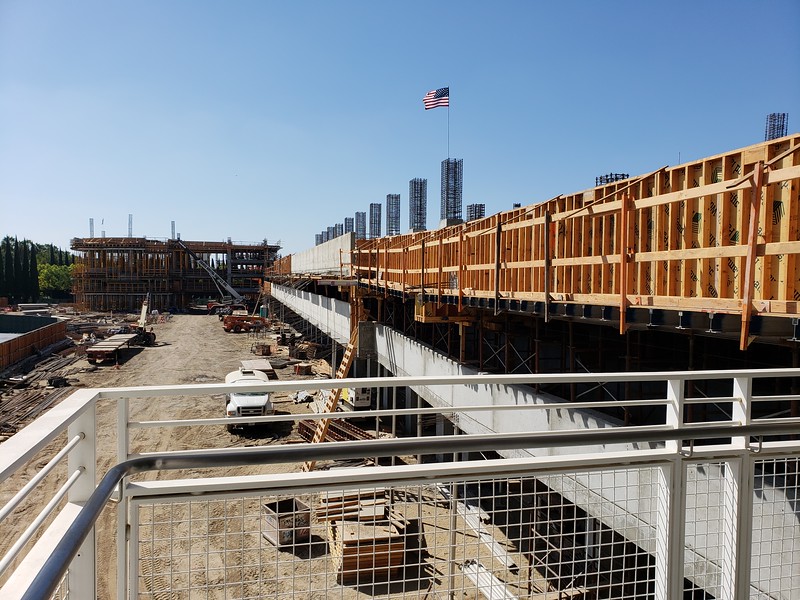 An unexpected change is coming to both Disney Springs and Downtown Disney District which are both slated to get an update featuring RALPH BREAKS THE INTERNET. Both locations — which are currently hosting THE VOID presentation of Star Wars: Secrets of the Empire by ILMxLAB — will be changing up the hyper-reality experiences this fall with the new RALPH BREAKS VR. 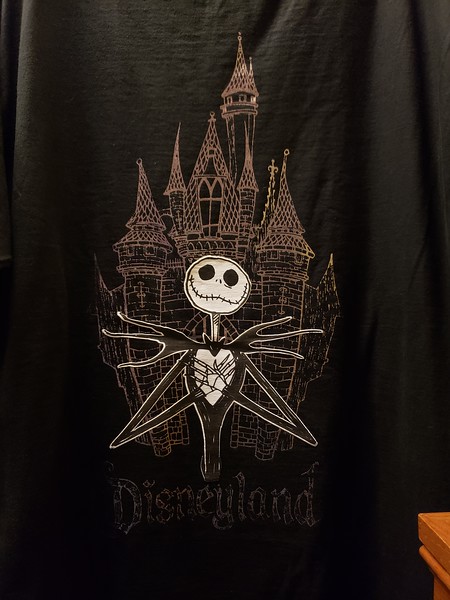 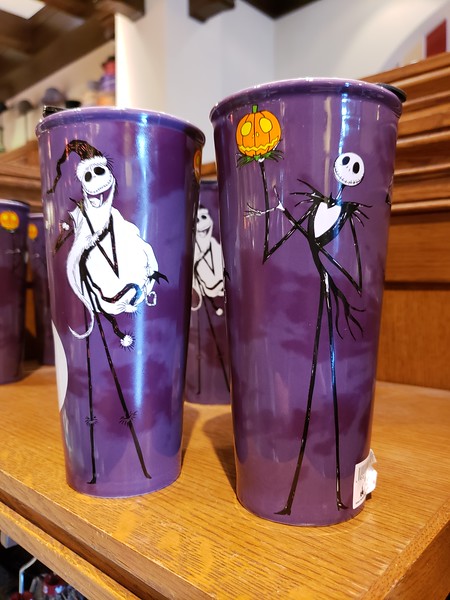 PICTORIAL: Food, Wine, Mice, Duckies, Star Wars, and much, much, more in progress at Disneyland Resort 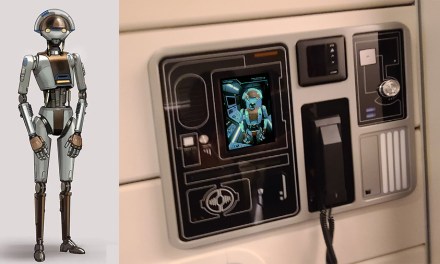