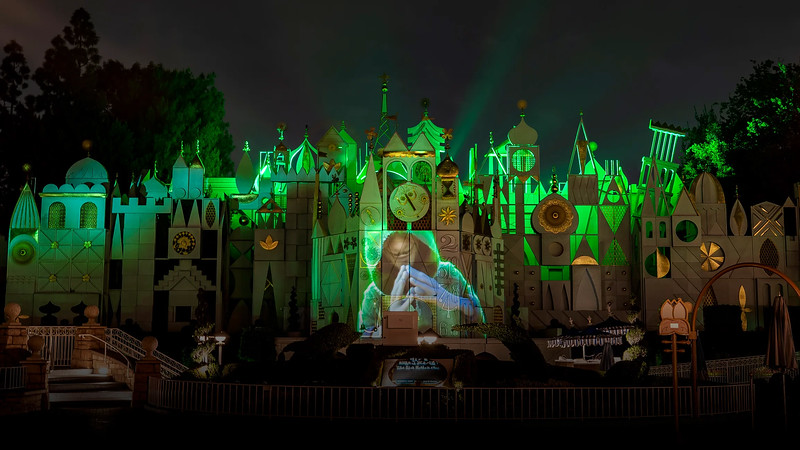 The Disney world is obsessed with “We Don’t Talk About Bruno” from ENCANTO and now the musical number comes to life at Disneyland on the facade of “it’s a small world” with a short but fun musical montage.

EDITOR’S NOTE: This post was updated 7/3 with video of the show

Occurring several times each evening, the brief visual montage will pays tribute to the movie’s hit song, “We Don’t Talk About Bruno.” Projection and lighting effects awaken the classic Disney attraction with an artistic style inspired by the song and its lyrics with select moments that feature characters from the film.

Like the Madrigal family’s Casita, tiles across the “it’s a small world” façade flip, turn, and rearrange themselves as one scene transitions to the next, culminating in a celebratory chorus and a nod to Bruno’s mysterious prophecy about Mirabel.

Other ways to enjoy ENCANTO at Disneyland Resort include a character greet and an upcoming cameo for the return of the Main Street Electrical Parade.

During the day, you can also visit with Mirabel, the young hero from the film, at Frontierland’s Zocalo Park in a colorful photo location that pays homage to the Madrigal family from Colombia.

Coming April 22, “Main Street Electrical Parade” will feature a new grand finale float that brings together stylized scenes from more than a dozen Disney and Pixar stories, including “Encanto.”

The ENCANTO“We Don’t Talk About Bruno” projection show plays nightly every half hour for a limited time at Disneyland.

ZOOTOPIA coming to 3D, BD, DVD, and Digital with wealth of bonus material