Attendance seems to remain relatively light at the Disneyland Resort but Friday evening saw the second-ever closing of Mickey and Friends Parking structure (since the Pixar Pals structure opened) as hundreds of guests ascended on the Happiest Place on Earth for the start of Halloween Time.

This update will take a look at on-going construction for the Avengers Campus Marvel expansion, Project Stardust on Tomorrowland and Adventureland entrances, plus we’ll take a look on-going projects in both parks!

Of course, a nice merch run for you at the end in this latest park pictorial. ENJOY!

Friday was the first day of Halloween Time and although crowds during the day were atypically light as they’ve been for most of the summer, the evening proved that the infrastructure around the Resort still can’t handle a crush of crowds, even now that the Pixar Pals Parking Structure has opened.

We found that the Pixar Pals entrance for the structure was closed (there’s no way to know that unless you drive over there which is certainly a frustrating factor) and on our reundant drive around the entire Mickey and Friends structure to loop back to the main entrance, we saw hoards of cars and pedestrians alike heading into the Happiest Place on Earth.

For the second time since Pixar Pals opened, the structure was closed temporarily. By all accounts, this seemed more as a means of aiding the gridlock around the structure as there were still plenty of parking spots in the structure when Disney social media announced its closure. The inability for existing infrastructure to handle the volume is a painpoint that continues to need addressing.

As we waited in the long line of cars at the parking tolls — which stretched out back towards the access bridge — not one but TWO of the toll lanes closed (with lines full of guests stretched behind them) forcing TWO lanes of traffic to feed into a single third lane… yep TRIPLING the wait time for those cars over all the others in the other lanes.

Once we finally got up to the Minnie level of Mickey and Friends, we made our way down to Security where we found the next set of incredibly long lines. Check out our video below as we walk past the line.

YOWZA!!! Lines to get through security at the Mickey & Friends parking structure. #HalloweenTime pic.twitter.com/6TMT1SYs7q 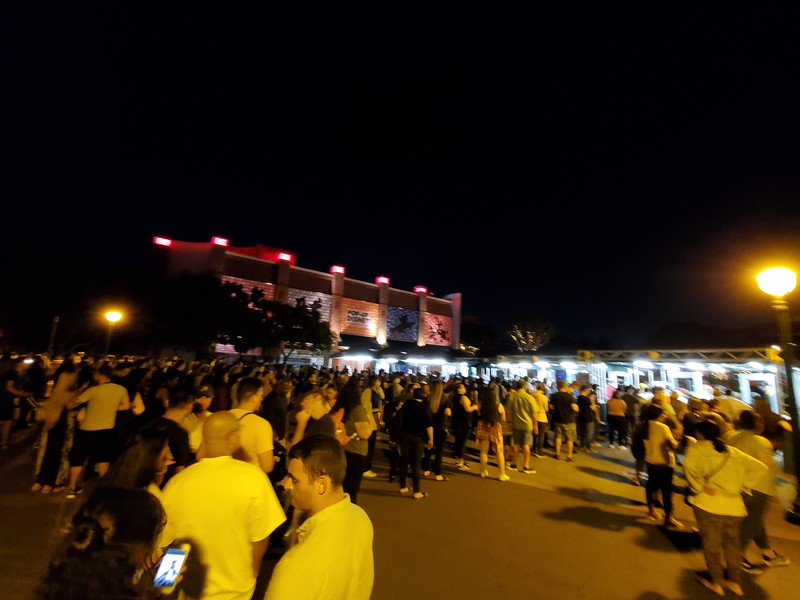 Opting to walk to Downtown Disney, we found that the entire Downtown Disney security checkpoint was completely closed. A security guard re-directed all the pedestrians to the Hotel-side security checkpoint which we’re sure hotel guests paying top dollar for the access surely must have loved. Lines stretched all the way back onto the street behind them and then made a sharp L-turn going back down street forming a large T of people trying to access the one station.

As we finally go to the front of the line, we found ANOTHER closing station, this time at security. We sure know how to pick them!

It seems that despite more parking spaces in the parking structure, the surrounding infrastructure around it are still incapable of handling the modern day crowds that can and do ascend upon the Disneyland Resort. The front-line Cast Members are then forced to face the brunt of the ire from incredibly frustrated guests. It’s not a magical way to start any Disney experience, quite the opposite.

With the sweltering heat of late, it’s hard to believe that it’s once again Halloween Time at Disneyland Resort but the pumpkins, orange bunting, food, and entertainment are setting the scene for a perfectly autumnal celebration. ENDS October 31, 2019!

We take to the Happiest Place on Earth to take in the sights, sounds, smells, and flavors of the season! Check out our guide to 2019 Halloween Time food and beverages! ENDS October 31, 2019!

It’s back! AP Corner returns once again to Disneyland Park to commemorate the Halloween Time season! If you have an Annual Pass to the Happiest Place on Earth, you’ll want to check out what Oogie Boogie has hooked up for this special AP-exclusive offering on the second floor of the Tomorrowland Expo Center (the second floor above Star Wars: Launch Bay.)

Downtown Disney continues its evolution with the announcement of a new dining option coming and a revitalization of an existing one! Asian Street Eats by Chef Hung Huynh is a new dining concept set to be located on the west end of the Downtown Disney District and will be the eatery’s first location in Orange County. It is set to open by 2019 holiday season. Jamba Juice announced a new simplified name – Jamba – to better reflect its menu of smoothies, juices and bowls. The name change is part of a larger modernization that includes the Downtown Disney District location set to reopen in early 2020.

The plaza in-between Mickey and Friends and Pixar Pals is looking very close to completion with all trees placed and nearly all pavers locked in. 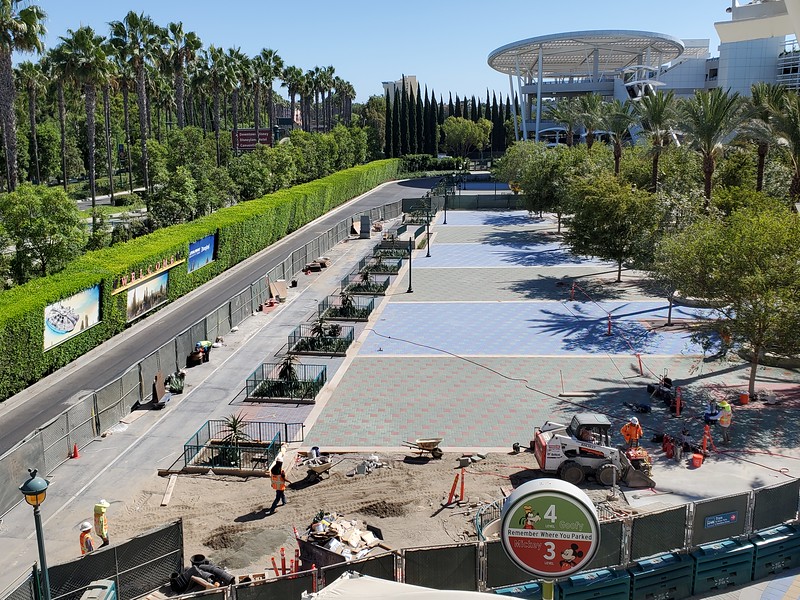 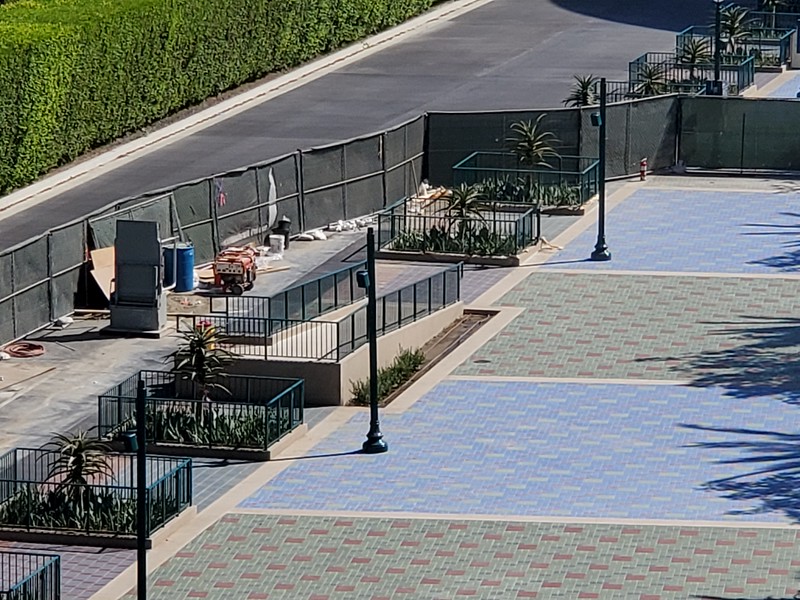 The new wheelchair ramp is awaiting its connector bridge.

Still some work left to do. 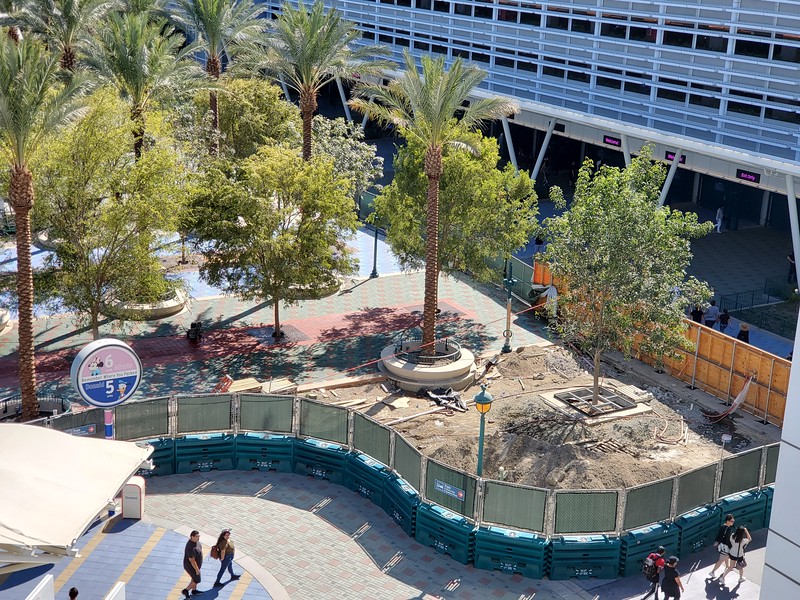 The new elevator is making progress with lots of new steel going up. 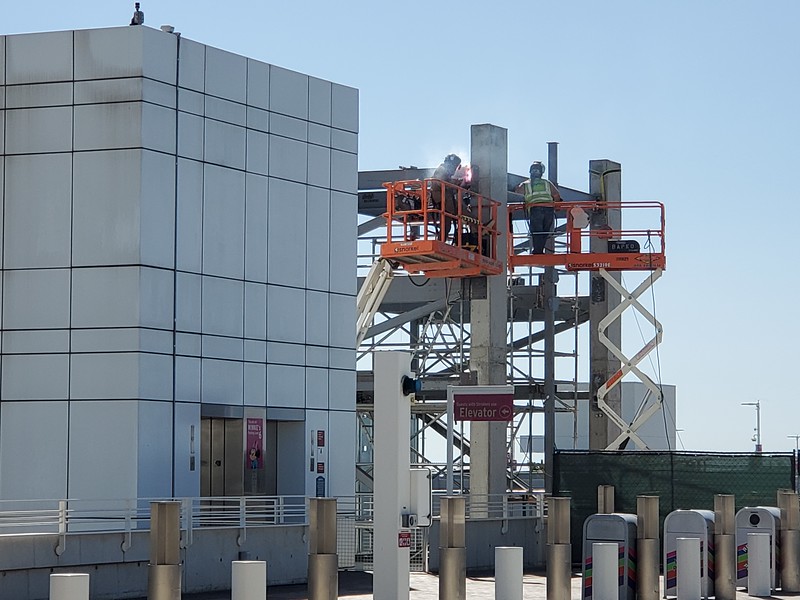 The two new elevator cars should add much needed capacity to the Mickey and Friends side.

The new bridge and connecting walkway to Downtown Disney are looking just about ready, too.

This current walkway to Downtown Disney will be closed once the bridge is opened.

The work on the riverway near Adventureland continues. 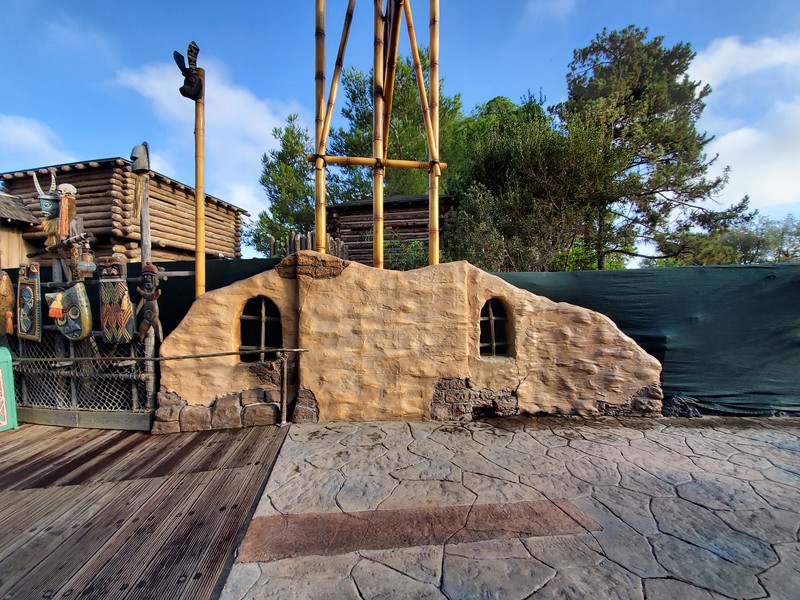 Removal of the rock-work at the Tomorrowland entrance and re-slopping of the walkway in front of it continues on.

Matterhorn work continues. Meanwhile, in the distance, I heard someone beckoning for Millie. It was the Mad Hatter. To whom was he calling?

Maleficent was not keen on her new knickname.

Walls are up again at the planters in front of STAR WARS: PATH OF THE JEDI. 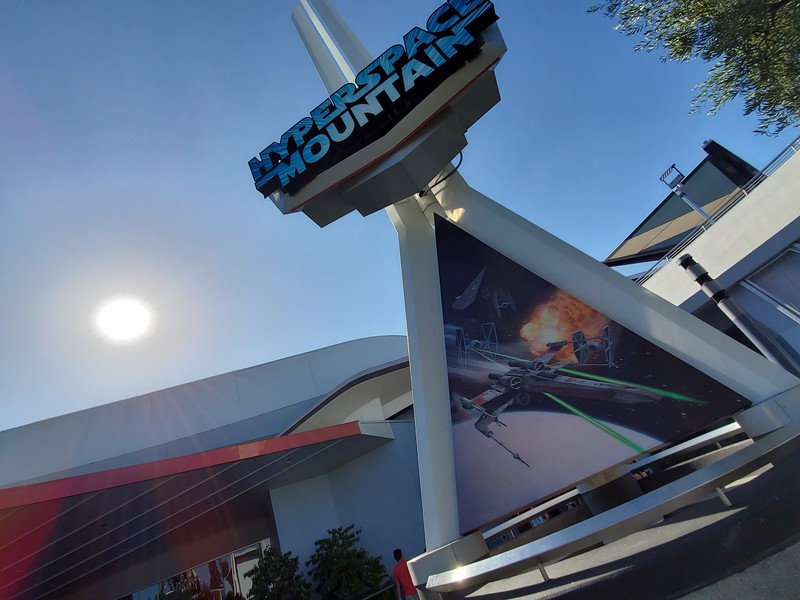 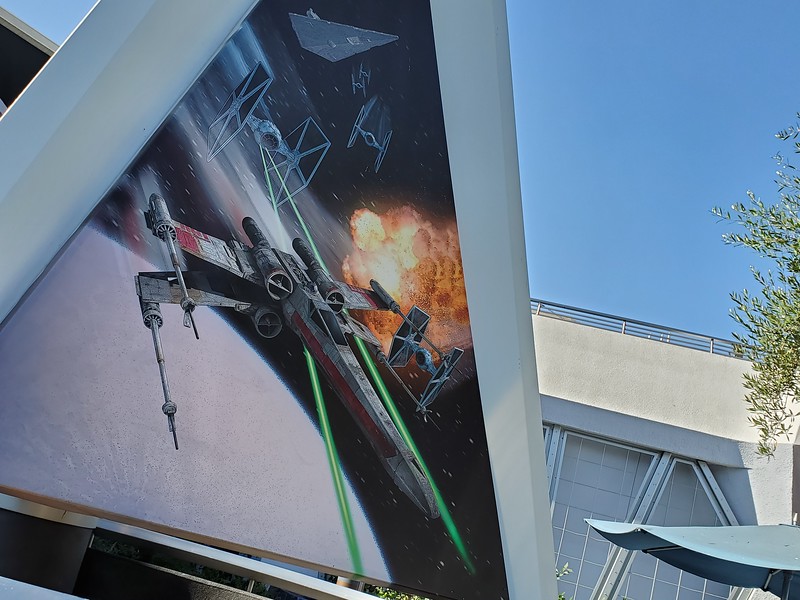 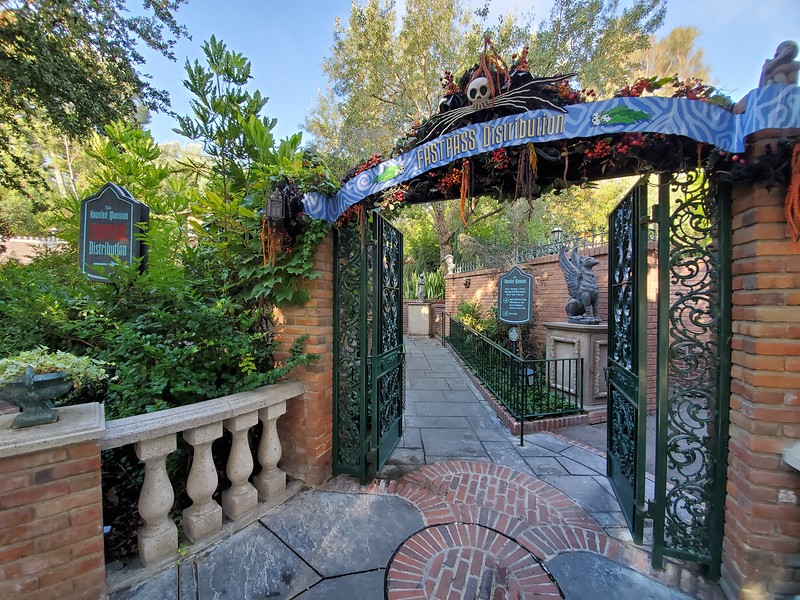 Guardians of the Galaxy – Monsters After Dark is back again but only after 5pm each day! Keep that in mind when acquiring your FastPass!

Walls are still up at the DCA main entrance around the Red Car Trolley station.

The setup for the Lion King show is gone. The show did not seem to be a big hit. Will you miss it?

Mickey is still gone on the Silly Symphony Swings. Why? 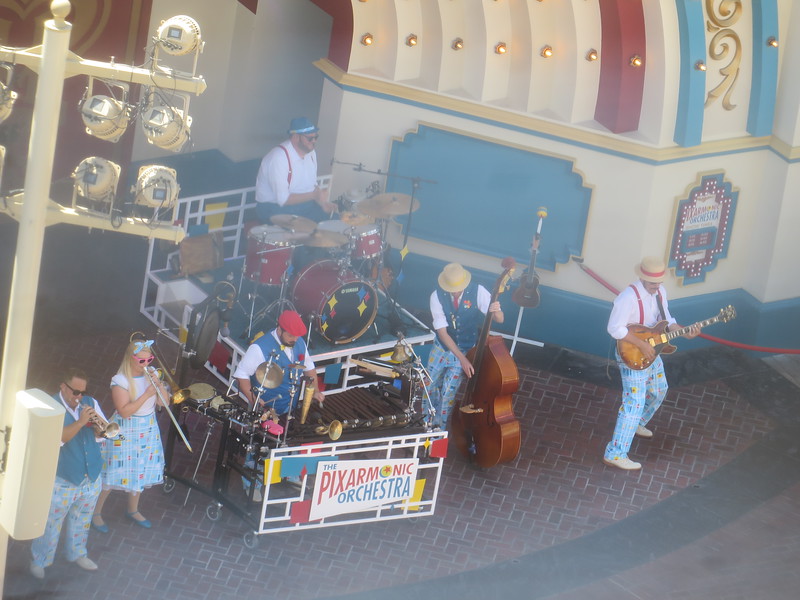 Seems it was too hot in the afternoon for the slush machines. The location was closed at the worst possible time.

Never noticed that the Studio Catering Co. has a Specialty Bundle for $24.99. Not a bad deal if you were already going to be ordering a bunch of items. 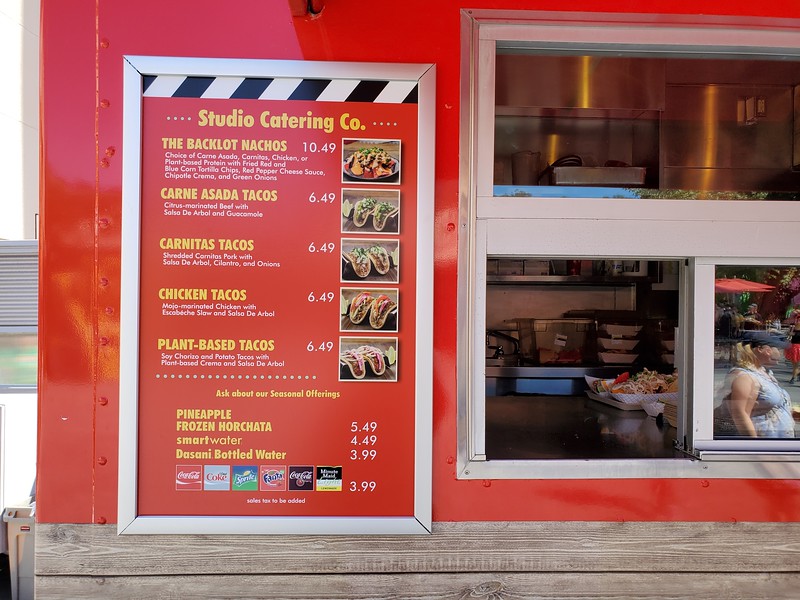 Here’s a look at at the menu options.

This has been on the menu for a while now and we finally got to give a try to the Frozen Pineapple Horchata. It’s witchcraft. We would have never thought to mix those two flavor profiles together and yet somehow it works. Not only do the flavors blend together they also stand independently.

Spider-Man is rocking his new suit that was introduced as part of the enhancements coming with his new ride at the Marvel Avengers Campus expansion in Disney California Adventure. The headline on the Daily Bugle has also been updated, AVENGERS HQ DESTROYED! Good thing a brand new one is being built right behind him next to the Guardians of the Galaxy attraction to house the upcoming Avengers E-ticket.

The Marvel expansion continues moving along. 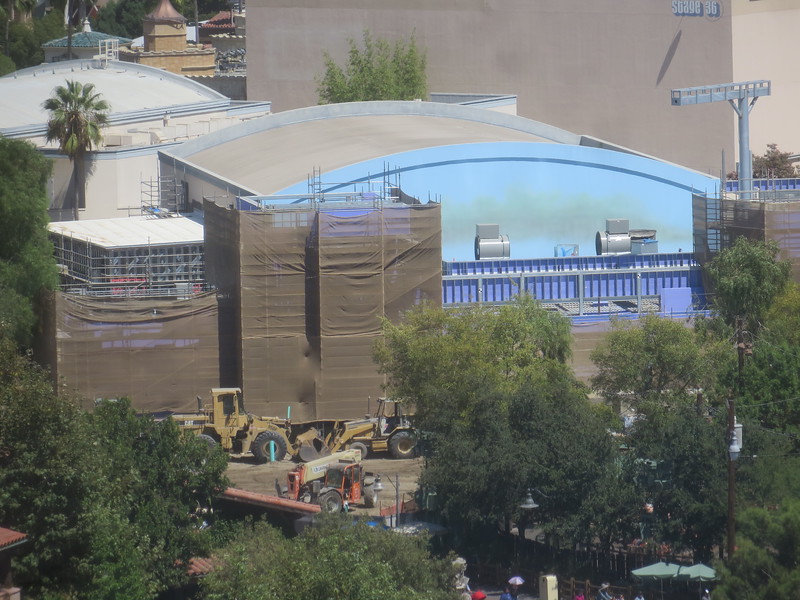 Here’s a look at construction on the upcoming new Spider-Man attraction.

Pym’s Test Kitchen is going up in the center of this shot.

Across from Pym’s Test Kitchen will be the new Avengers HQ which will serve as the entrance to the Phase-2 Avengers attraction. 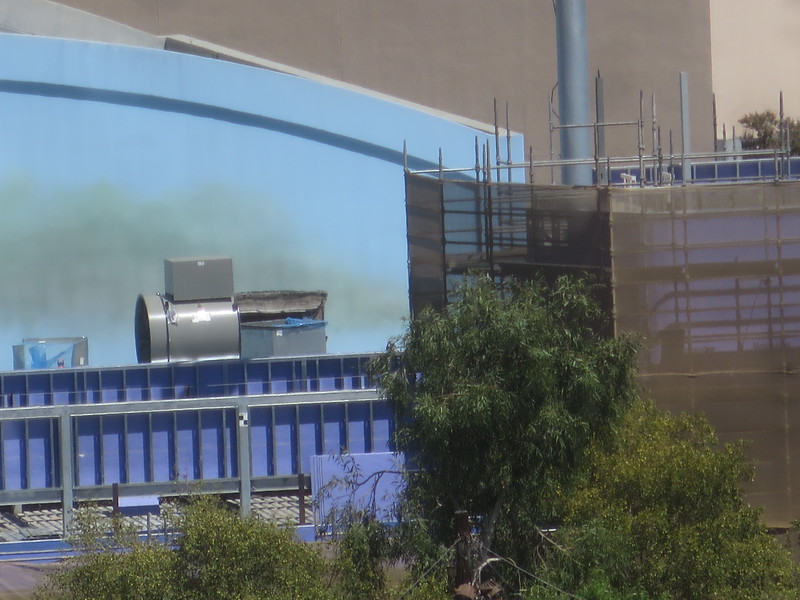 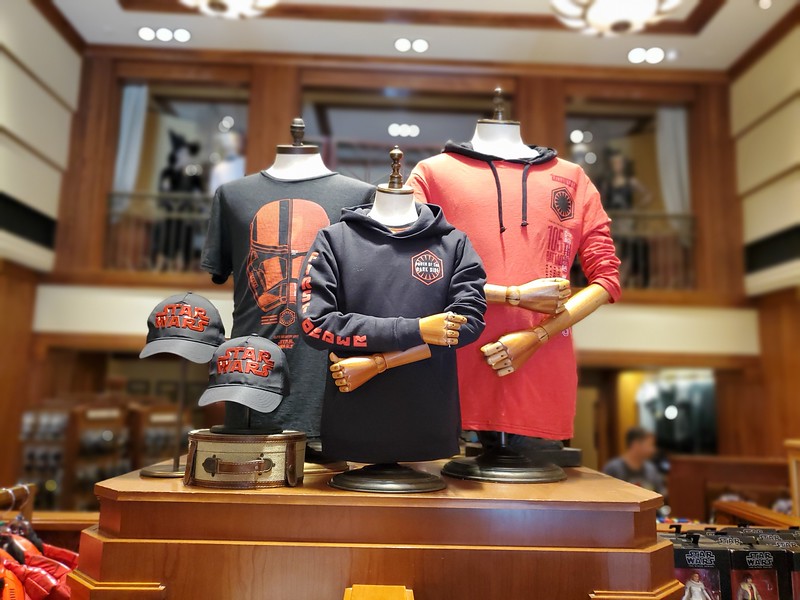 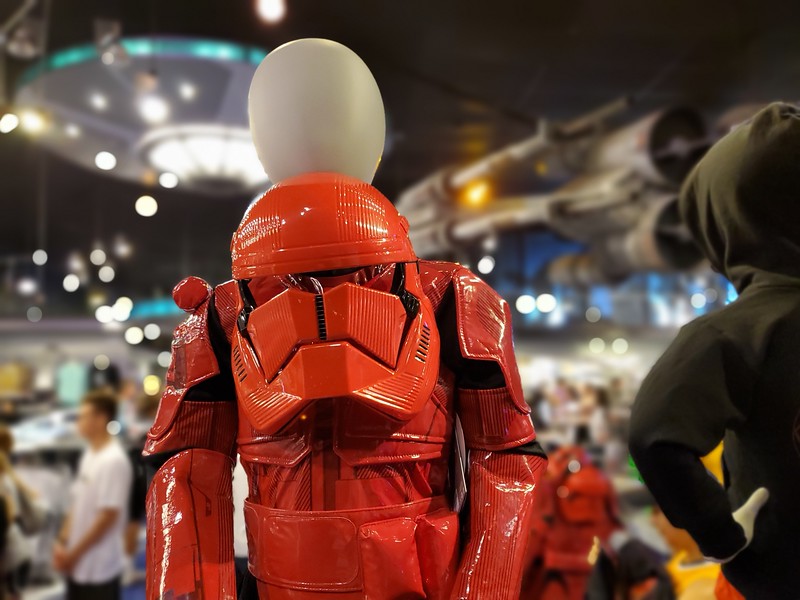 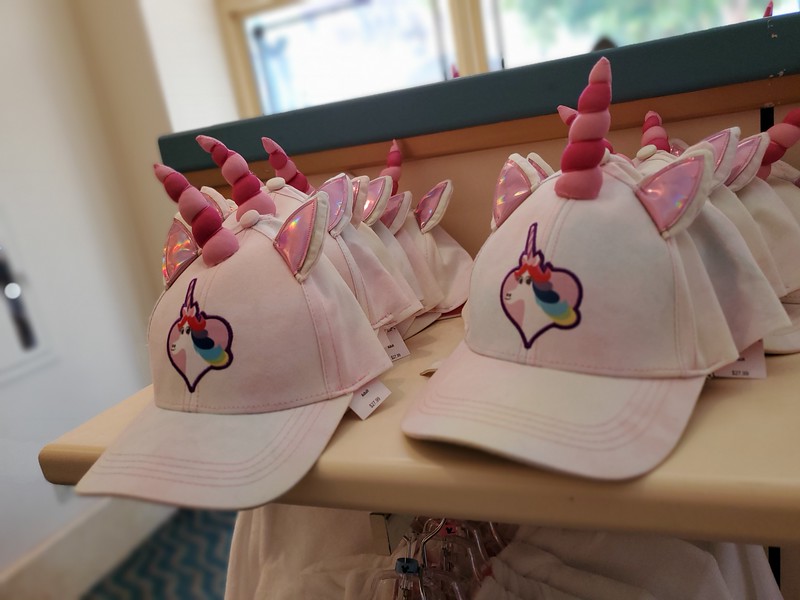 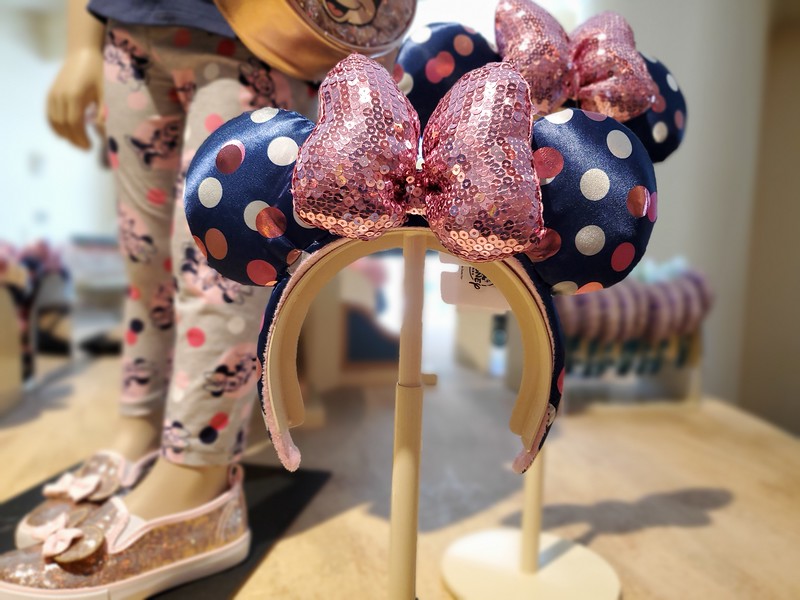 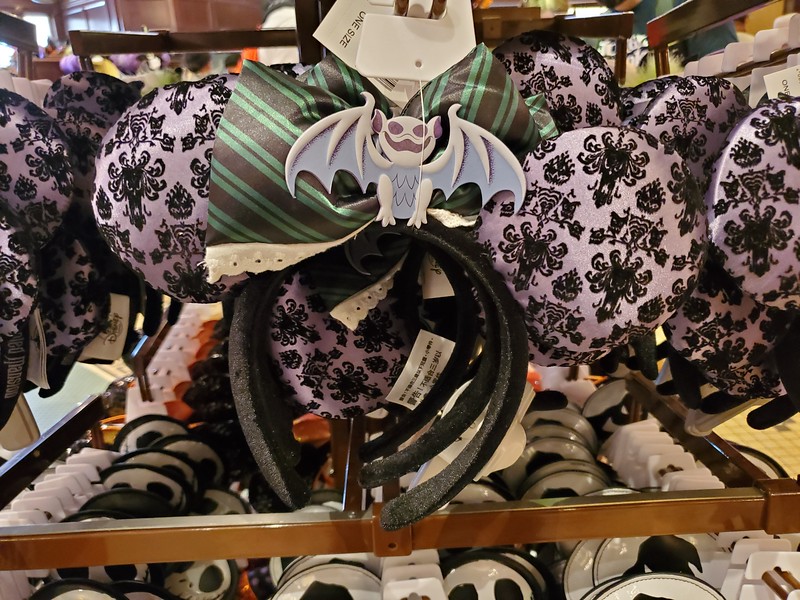 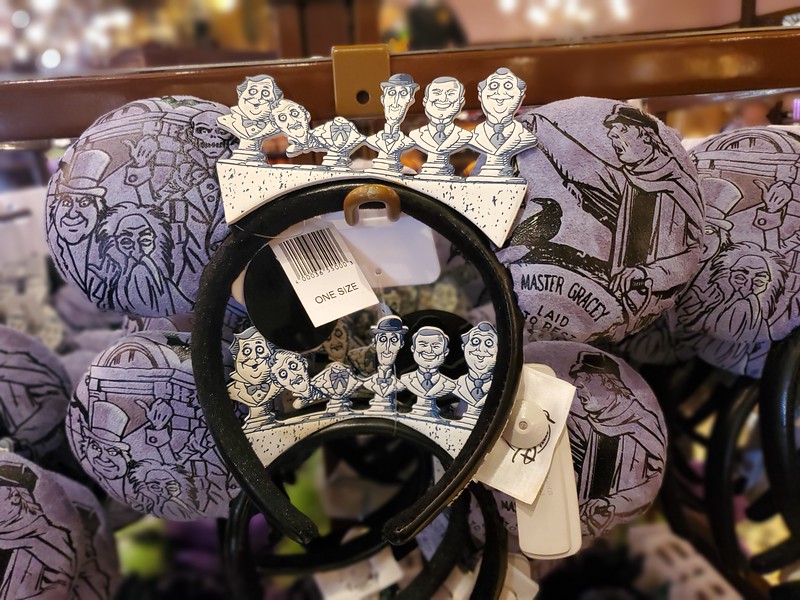 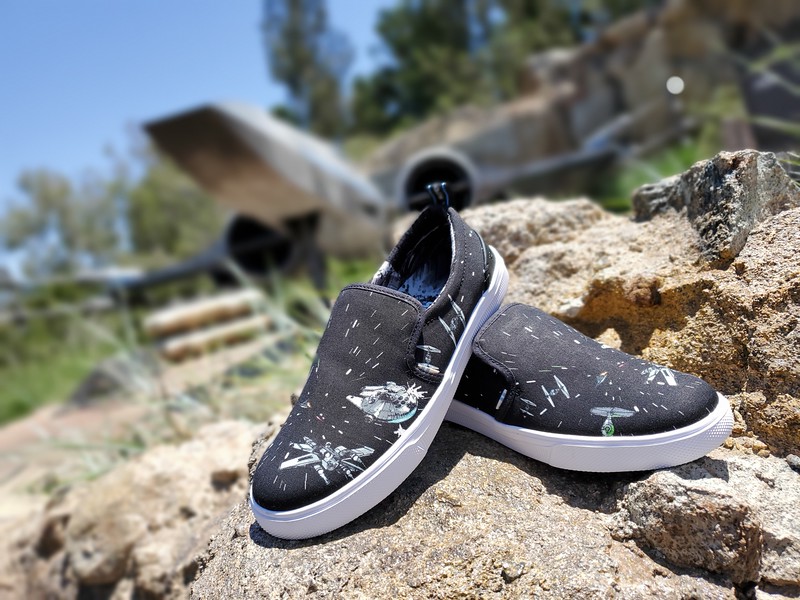 MORE INFO: The Force is strong with the new #StarWarsxTOMS collaboration 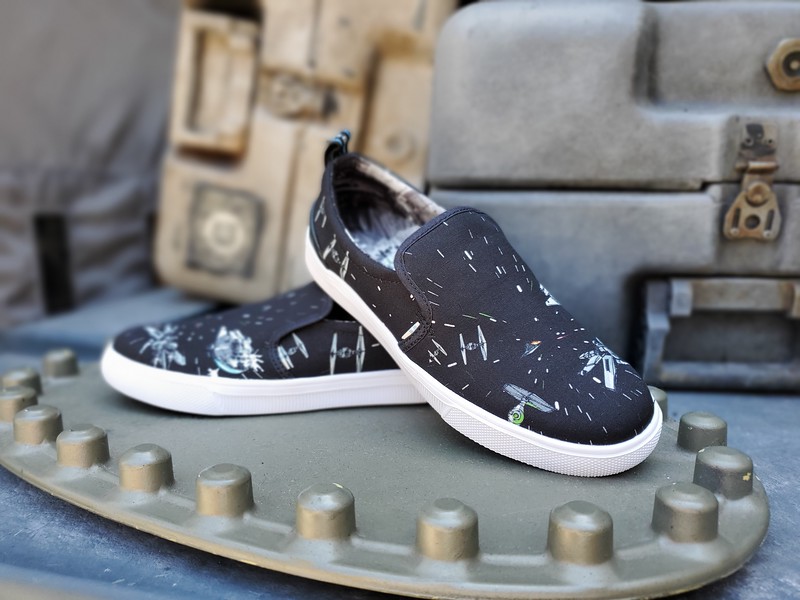 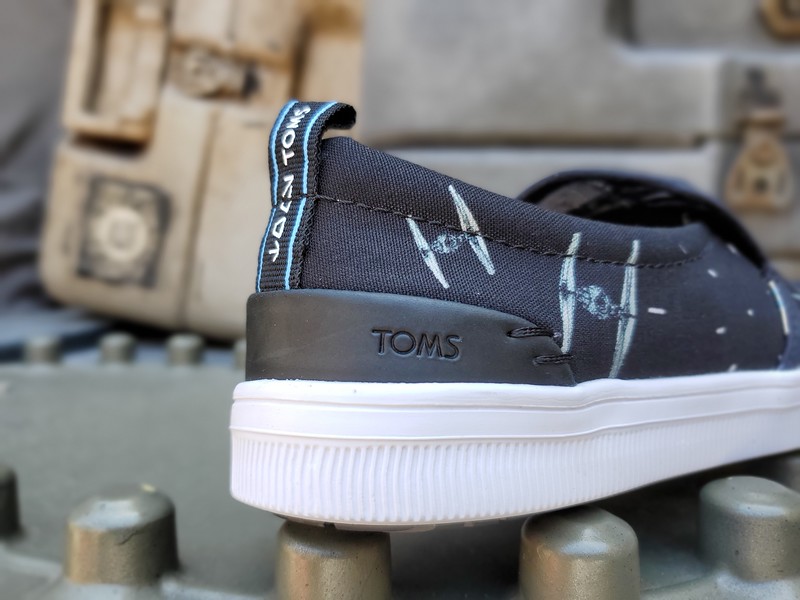 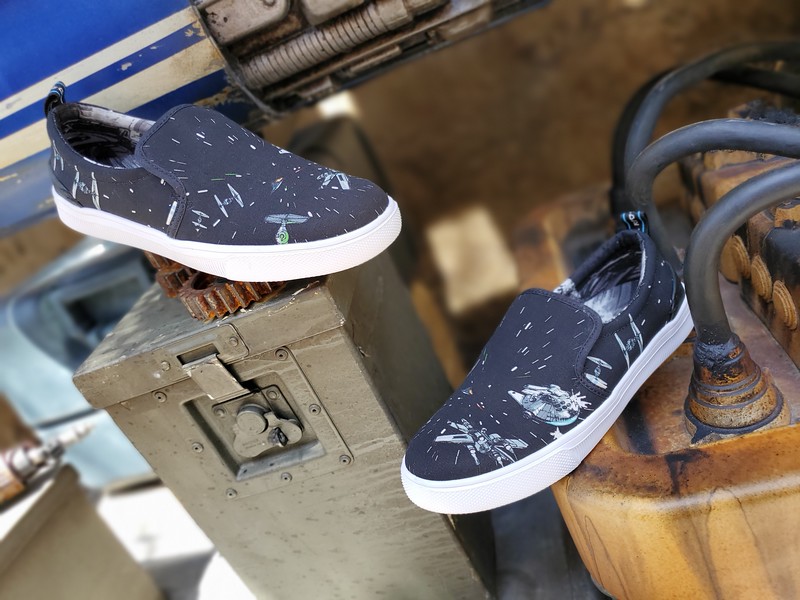 The amount of projects going on at Disney Parks right now has our heads reeling. From new Avengers attractions to Cruise Ships, Private Islands, and and SPACE CRUISERS, Disney Parks are literally taking us around the entire galaxy over the next few years.

If a stop to Disneyland’s Market House Starbucks is usually in your itinerary, then you might be excited to know that two Disneyland exclusive drinks — crafted by Cast Members at the location — will be available through the run of the Main Street Electrical Parade (September 30, 2019)!

The two concoctions are the Neverland Sunset (lemonade, peach juice and passion fruit tea) and the Wonderland Frappuccino (mocha frapuccino with a swirl of strawberry puree) paying tribute to iconic floats from the twinkling spectacle of nighttime magic and imagination! 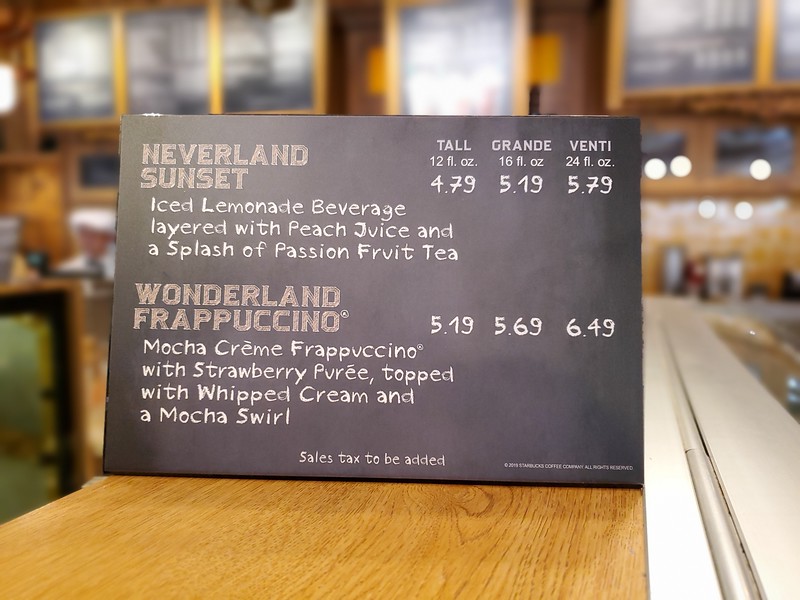 Most event nights typically sell out each year. Dates that are below are sold out as of the last update of this page. Check the official site for the most updated listings.

The Main Street Electrical Parade is back for a special summer encore and it brings with it special treats and merch options but enjoy it while you can! ENDS September 30, 2019. 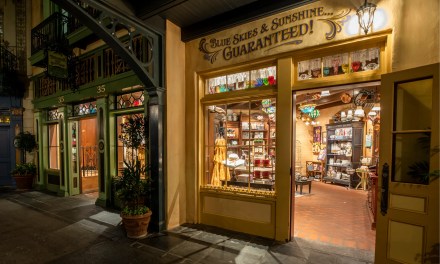