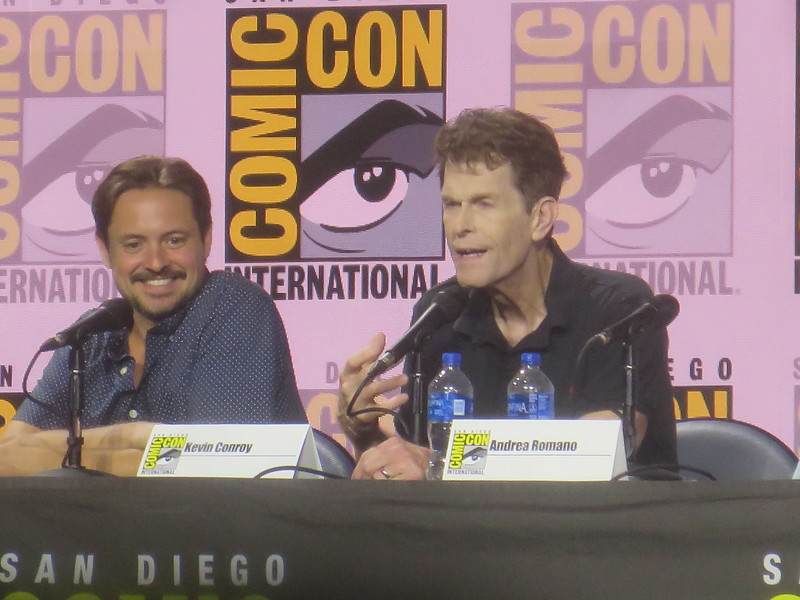 Warner Brothers took Hall H by storm this year with a special panel dedicated to celebrating the 20th Anniversary of Batman Beyond. Produced by Warner Bros. Animation, Batman Beyond won two Emmy Awards and three Annie Awards and is often recognized for setting new standards for superhero storytelling with innovative designs, outstanding voice acting, and an intriguing approach to DC’s iconic characters and stories. The series also spawned an acclaimed animated film, Batman Beyond: Return of the Joker.

Although we wouldn’t see Mark Hamill (voice of Joker) reunite with Conroy on the stage, we did get to see him later in the Con talking about his voice work as the Joker during the Dark Crystal panel (MORE: #SDCC: Hamill, Edgerton, Henson, and swoon: A look at DARK CRYSTAL: AGE OF RESISTANCE). Conroy has been the voice of Batman to so many generations of Batman fans and it’s an absolute thrill to see him get such well deserved recognition at the panel. Although many might not recognize his face they will undoubtedly recall his stoic performance as the voice of the Dark Knight. Conroy shared an amusing fact that Hamill doing his Joker voice spits… a lot.

20th Anniversary Blu-ray set for BATMAN BEYOND was announced during the panel.