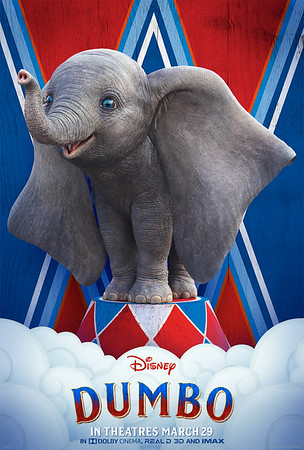 The new posters feature Dumbo (the newborn elephant with a sweet disposition and over-sized ears); Holt Farrier (Colin Farrell), a former circus star who finds himself caring for an elephant who can fly; Max Medeci (Danny DeVito), the owner of the struggling Medici Bros. Circus who hopes a baby elephant will turn things around; V.A. Vandevere (Michael Keaton), an entrepreneur and proprietor behind a state-of-the-art amusement utopia called Dreamland; and Colette Marchant (Eva Green), an accomplished aerialist who never dreamed she’d one day be soaring with a flying elephant.

If a day at the circus isn’t exactly your speed, you can skip the crowds and the lines and enjoy some online blackjack. Don’t worry about dodging scary clowns with creepy faces and instead keep your eyes out for kings and queens, (and jacks and aces)!

If you need something with a little more energy — and a high amount of adrenaline — you might find that sports betting could be a way to get your blood pumping… all while giving you the chance of winning big!

FIRST LOOK: Up your selfie game inside the new ‘Pop-Up Disney! A Mickey Celebration’