MARVEL SUMMER OF SUPER HEROES launched this weekend at Walt Disney Stuidios Park which brings together — for the very first in Europe — the Marvel Avengers with epic shows and encounters. Think of last year’s Summer of Heroes at Disneyland in California and you’ll get an idea of what to expect here.

A new family show featuring the characters is presented several times a day at Studio Theater. 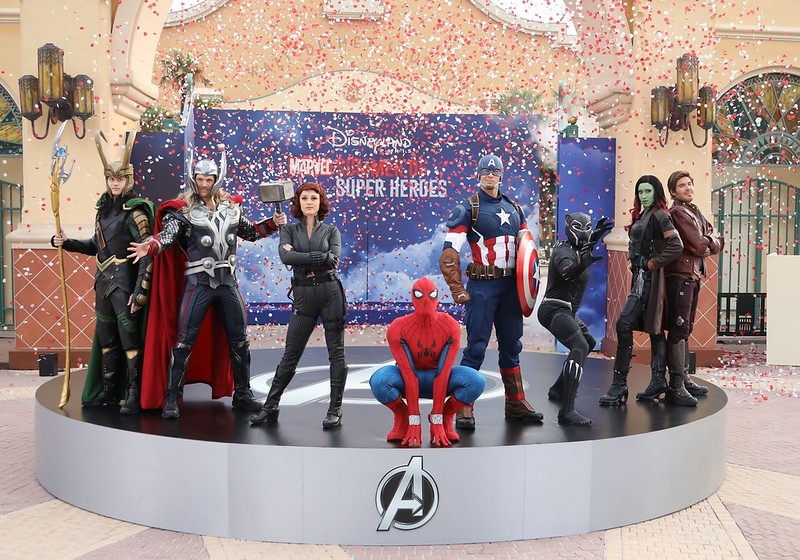 Tony Stark invites you to Production Courtyard, outdoors, to present his latest version of his “Arc Reactor” that creates green energy. But be careful, This is exactly the type of event that a certain Loki likes to interrupt. The formidable half-brother of Thor will take the opportunity to try to overthrow the power. Let’s hope that Black Widow, Spider-Man and the god of thunder himself are around to counter his plans …

Takes place several times a day at the foot of the Hollywood Tower Hotel.

Dance with Guardians of the Galaxy

As the name of this show indicates, you will literally be able to dance with the Guardians of the Galaxy!

Even in France, the opportunity to meet Captain America is in high demand and now you can for the first time ever at the Disney Parks in France!

Of course, The Marvel Superheroes Summer is also the opportunity to discover a range of Marvel products exclusive to Disneyland® Paris including souvenirs, lifestyle products, and event-specific Marvel heroes headbands

Special menus can also be found including Spider-Man inspired burger, Iron Man mug or Thanos Inifinity Gauntlet mug and yes, bread in the shape of Groot!

An exclusive experience with the “Signature Marvel Stay”

The Signature Marvel Stay offers superhero fun; it includes a stay in one of the 7 Disney Hotels, Disney Park admission tickets and special experiences. You can enjoy an American buffet dinner with the presence of Captain America, Thor and Black Widow, an exclusive meeting with Spider-Man, a gift card or a Disney PhotoPass TM to immortalize every important moment.

Legends of the Force – A Celebration of ‘Star Wars’ brings a galaxy far, far away to Disneyland Paris