You might not have noticed it but Oscar-winning actress Charlize Theron has really become quite the bad-ass. The talented actress has a notable list of achievements to her acting credits but over the past few years she’s really started to mold herself into one true woman of power and that’s why she was the sole actress in the spotlight at San Diego Comic-Con this year for the Entertainment Weekly’s Women Who Kick Ass: Icon Edition with Charlize Theron.

The femme fatale has quite a few kick-ass credits under her belt including: Furiosa in Mad Max: Fury Road; Cipher in The Fate of the Furious; Ravenna in Snow White and the Huntsman; Meredith Vickers in Prometheus; and Aeon Flux. For more than a decade, Oscar winner Theron has embodied strength, power, searing intelligence, and steely determination on screen. EW’s Sara Vilkomerson moderated a one-on-one no-holds-barred conversation with a woman who defies the rules-and creates her own as she prepares to beat the hell out of sinister forces in her new movie ATOMIC BLONDE later this year.

Theron is quite passionate about the upcoming film in which she portrays quite possibly her most bad-ass character yet. Women might not be able to fight the same way as a man, as she pointed out with her on-screen fight training, but that makes them no less worthy of respect or power. This is a theme that permeated the conversation and something with which Theron is very personally vested. There’s no reason women-led films shouldn’t be more popular. She put it back on the audience; if we want to see more bad ass women — not just leading/starring, but also MAKING films — then it’s vital that those projects have the support of audiences.

She shared a story when asking why more projects aren’t being led by women and the answer she received as that if the movies actually sold, they would. At the end of the day money talks so if great projects by female creators and stars aren’t being supported then there will be little interest for the Hollywood machine to put the effort into making any changes to the status quo. Films like WONDER WOMAN are a super exciting buck to tradition and one at we should hope is just the start for more women to KICK ASS.

When asked if she’d consider a role as a female Bond she pointed to her upcoming project as something that would be even cooler. Her Bond-esque character on ATOMIC BLONDE is equally as impressive and could even go toe-to-toe with the swanky spy. We never quite realized it but Charlize Theron really is a woman who kicks ass! 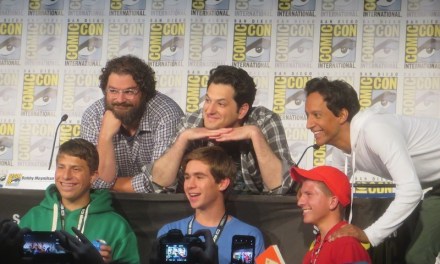