It was a super exciting week at the Disneyland Resort as the cherished Pirates of the Caribbean attraction reopened its doors and celebrated its 50th Anniversary throughout New Orleans Square with a host of special offers including eats, merch, and entertainment. There was even an appearance by the Captain Jack Sparrow character who joined a roster of Instagrammable pirate booty that included Golden Churros, Pirates Steins, and Disney Pins.

Not too far off from all the swashbuckling fun, more excitement continues due north past Frontierland where the Star Wars themed land continues to push forward on an aggressive pace to open in 2019. But before all that, the Frontierland facing work on the river and Tom Sawyer Island continues to move forward for an opening later this year.

Around-the-park refurbishments continue as we inch closer and closer to an even busier Spring Break / Grad Nite season. Refurbishments continue around the parks including the Matterhorn which is also getting a FastPass/MaxPass enhancement when it reopens. We also saw more MaxPass scanners popup in Tomorrowland at Star Tours.

Of course, we’ll have a quick merch run (with a look inside the newly reopened Pioneer Mercantile). All of this and more in our latest pictorial! ENJOY!

The beloved Pirates of the Caribbean turned 50 years old on Saturday, March 18 and to celebrate, Disneyland offered a slew of goodies and offerings to commemorate the special return of the attraction from its several month refurbishment. Everyone entering Disneyland (while supplies lasted) was able to get buttons commemorating the special day. Of course, also a promo for the upcoming DEAD MEN TELL NO TALES.

A bunch of guests were sporting their passion for the ride. Elizabeth Swan and the Red Head!

The ride itself is the same classic experience as before following its refurbishment. We noticed the attraction seemed slightly brighter overall. Otherwise, everything is neat and pretty! Captain Jack Sparrow was roaming around New Orleans Square all day. No set meet and greet. He was also handing out temporary tattoos at one point.

Special merch that promptly sold out was available.

Lucky the Pirate brought his brand of magic to the weekend crowds. Wouldn’t it be awesome if he had the guitar from Coco?

Special food and drink were available including Calypso’s Caribbean Chicken Stew ($10.99) with Caribbean-seasoned chicken, onions, carrots, celery, tomatoes, potatoes, and yucca. You can wash that down with Jolly Roger Punch ($3.59) which is a tropical blend with hints of pineapple, orange, and mango.

Tables setup for the hungry masses. A bunch of photo ops to be had!

Here’s a pic from our Twitter. Follow us on Twitter.com/mouseinfo to stay up to date with our postings! Did we mention Captain Jack Sparrow was out and about?

This was the line for the Mint Julep Bar which completely wrapped around the building, wound back towards the Haunted Mansion and then began to loop around in Magnolia Park. Woof!

The stein IS really cool, though. It sold out very early in the morning. Cast Members expect the baubble to be available once more in May. More of a yellow than GOLDEN. Noticeable but not overpowering lemon flavor.

Captain Jack does not seem impressed with the line situation.

Last week, we shared photos from the construction site of the new Star Wars themed land of the new AT-AT Walkers and Disney released a video this week that provided some in-ride context for where those will be in the attraction.

A lot of progress at the back half of Disneyland which will eventually represent a galaxy far, far away…

To all who come to this happy place… WALKERS! Work continues on the rockwork and bridge for the Disneyland Railroad. You can see the recently placed trees are already making a huge difference. Lots to do along the Big Thunder Trail. Hard to see here but the recently placed boat on the south-eastern side of the river got a big rudder paddle.

Scaffolding and tarps have come down once again on the facade for the upcoming Marvel Guardians of the Galaxy – Mission: BREAKOUT attraction. Only 69 days left until the grand opening. Tivan group flag indicates that the Collector is HOME. Reminds me of Glendale.

We stopped over at the Disney California Food and Wine Festival for some more bites of menu items that we weren’t able to sample last week when we did our INSIDE AND IN DEPTH look at the event.

Black Garlic Soy-Braised Pork Belly Bao with Pickled Vegetables ($7) was one of our favorites last year and this modified version this year still ranks high on the list. Tender soft boa with yummy pork belly and crispy veggies. A fantastic offering.

Grilled Beef Tenderloin Slider with Chimichurri Sauce ($7.75) is another delicious option. A big chunk of beef on the mini brioche bun with yummy marinated onions.

Chicken Teriyaki slider with spicy Dole® pineapple jam ($6.50) is about as clear as it sounds. Not very spicy at all. Sweet and salty, a great combo.

Dole Pineapple-Strawberry Float with Vanilla Ice Cream and Strawberry Pearls ($7) was tasty but the proportion of ice cream to juice was super off. With a few sips the juice was all gone and we were left with a large portion of vanilla ice cream. You might want to let this one sit for a bit and stir it together to get a better experience.

Garlic-Rosemary and Avocado Oil Ice Cream pop ($4.50) was actually quite lovely. We did not detect much garlic but the rosemary does pack a nice note giving this a surprisingly sweet yet earthy flavor. It’s quite good!

See our full recap: INSIDE AND IN DEPTH: Disney’s California Food and Wine Festival 2017 debuts at DCA.

We got to try the new Dole Whip Cotton Candy. As far as Cotton Candy goes it’s quite tasty! Perfect touch of pineapple without overpowering. It DOES turn your tongue yellow though! 🙂

Thumper Easter/Spring balloons are back and ever just as adorable!

A good guide for guestimating crowds at Disneyland is seeing how busy the parks are at 9am. This is NOT the normal level of attendance at Disneyland on a Saturday at 9am. Yikes!

Pirates of the Caribbean, as expected, was incredibly busy. We noticed the boats were moving zippily through the attraction.

Adventureland restrooms have lost most of their construction walls. The women’s side has reopened (we accidentally deleted this photo of the new entrance) which is now more to the right and has been expanded into the Pioneer Mercantile space. The men’s restrooms remain closed for now.

Pioneer Mercantile has reopened. The shop remains mostly the same, a little smaller. Still has some of its old Pocahontas layover elements. Walls came down at Star Tours.

As expected, two new FastPass scanners have popped up at the entrance.

Never noticed this service dog cage at the exit, even the label here stays in theme.

Forget the lemon yellow churros, how about these orange ones that Cast members were using to direct traffic?

Love this planter in New Orleans Square. The Pirates crowds were getting oppressive so we opted to go for a quiet place. Tiki Room! So much for that idea.

Bengal Barbecue just started serving these wonderful Pork Belly Skewers. They are served with lettuce so you can eat them like a wrap. They are FANTASTIC! Red Rocket’s Pizza Port is moving what can only be assumed to be old STAR WARS: THE FORCE AWAKENS merch. Chewbacca and Kylo Ren are available at the Pizza Port. You can get BB-8 and Stormtrooper glasses at the Galactic Grill.

This was so tasty we forgot to take a picture of it. DELICIOUS!

They removed the pixie dust effect from the Main Street Electrical Parade!

So this was earlier in the week but had to admire its loveliness.

Not much visible on the new Splitsville location coming soon. The new location promises to bring bowling, sushi, and other fun eats.

From the tram route, you can see that the foundation has been laid. Should be going vertical quite soon! Disney Emoji merch is back! Tell me about it.

Beauty and the Beast merch abound.

One of these merchandise pieces is not like the other. Now it’s time to say good night to all our company! 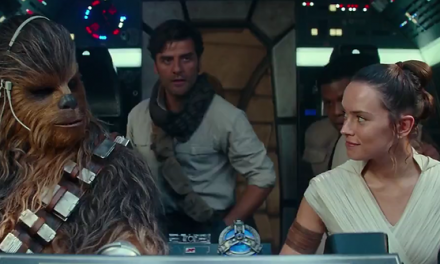 WATCH: ¡Viva Navidad! is still a must-see celebration for the 2019 #DisneyHolidays