On April 5, 2016, Universal Studios Hollywood held the official world premiere for their new WIZARDING WORLD OF HARRY POTTER. The splashy gala included a red carpet celebrity welcome, a dazzling opening ceremony at the castle, and an after party replete with all the tasty morsels afforded by the new expansion.

The land officially opened two days later on April 7 but for now, join us as we take you into the magical night of the world premiere. Ahead of the red carpet, Universal brought out a few of its entertainers and characters including Gru and the orphans, all three Transformers characters, and the velociraptor.

The event was kicked off with the students of the Hogwarts Frog Choir providing a beautiful and dramatic beginning to the event.

The park’s Chief Operating Officer and President Larry Kurzweil remarked about the new land and the fact that the park has now had more than 75% of its layout updated in recent years. After a special wand presentation by one of Ollivander’s wandmasters, he couldn’t help but indulge the power afforded to him and lit off a few incendio spells that sent massive fireballs into the air. As a special treat, composer John Williams joined the stage along with Harry Potter franchise stars Warwick Davis, Tom Felton, Evanna Lynch. Oliver and James Phelps also made a comedic entrance in a blue Ford Anglia not unlike the one seen in Harry Potter and the Chamber of Secrets. John Williams then had the special task of directing the Los Angeles Philharmonic for a delightful concert of music from the films. They continued to play on through the spectacular projection finale show moment that included pyrotechnics and projection mapping on the facade of the massive castle. After the finale, guests and media in attendance were invited to enjoy both Harry Potter and the Forbidden Journey as well as Flight of the Hippogriff.

The celebration concluded with a special party that included tons of treats including sample sized portions of many of the land’s new food, drink, and dessert offerings.

As a parting gift, we received an interactive Harry Potter wand that can be used within the land to activate magical spells.

We have a few great pieces on the WIZARDING WORLD OF HARRY POTTER to explore, check it all out below! 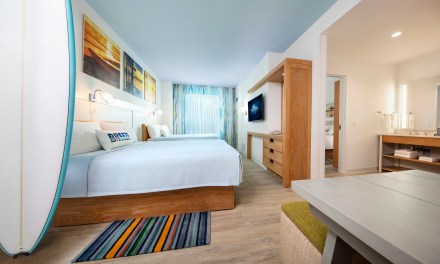