Kylo Ren will soon be available at Disneyland and Disney’s Hollywood Studios for meet and greets. He will be found at the Star Wars Launch Bay in both parks. Everyone’s favorite Wookiee, Chewbacca, can still be found at Resistance base in both places.

The fate of Darth Vader who previously did greets in the parks has not been officially announced but the change should not come as a surprise as Disney from the outset has stated that the Star Wars Launch Bay was designed to showcase a variety of Star Wars characters over time.

Guests may encounter the villain starting in February 2016

LAKE BUENA VISTA, Fla. (Jan. 15, 2016) – Star Wars: The Force Awakens has quickly become the highest grossing film in American history, and soon guests at Disney Parks will be able to interact with one of the film’s most intriguing and chilling new characters, Kylo Ren.

Every day at Disney Parks, guests step into Star Wars experiences such as Star Tours: The Adventures Continue, Jedi Training: Trials of the Temple and Star Wars Launch Bay, where they come face to face with some of the greatest heroes and villains of the saga. Starting in February, a visit to Star Wars Launch Bay at either Disneyland Park in California or Disney’s Hollywood Studios at Walt Disney World Resort in Florida will transport guests to the Star Wars galaxy for an encounter with Kylo Ren on the bridge of his First Order Star Destroyer.

As seen in Star Wars: The Force Awakens, Kylo Ren is a dark warrior with a mysterious past. Kylo Ren is strong with the Force and serves as a leader of the First Order, seeking to destroy the New Republic, the Resistance and the legacy of the Jedi.

Star Wars Launch Bay is designed to showcase a variety of Star Wars characters over time. In addition to Kylo Ren, guests may also come across a garrison of First Order Stormtroopers or the heroic Wookiee, Chewbacca, holed up in a secret Resistance base.

The Force has awakened at Disney Parks with the addition of new and reimagined Star Wars experiences, just in time for fans of the blockbuster new movie, Star Wars: The Force Awakens, to step into the Star Wars saga every day.

The new experiences further expand the Star Wars presence ahead of the new Star Wars-themed lands coming to the Disneyland Resort and Walt Disney World Resort.. 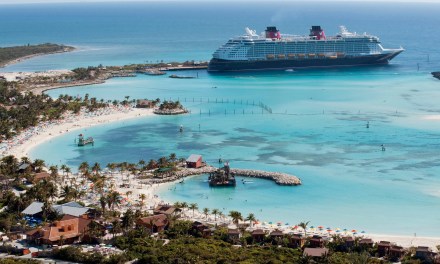