The big news tonight was the debut/preview of both Diamond Mad T Party and World of Color: Celebrate! but as part of this media spectacle, there was a little pre-show entertainment in the form of a small reception/party that included some yummy appetizers, tantalizing desserts, character appearances and some live entertainment.

The event was splashy yet modest and we’re inviting you to join us (retroactively and in spirit only but you’ll take, right?)!

The menu for the evening included sliders, scallops, and salads plus tarts, cakes and even a pot de creme in an edible chocolate cup.

Five and Dime were keeping things hopping on Buena Vista Street and as the sun began to set, the Diamond Mad T Party kicked into high gear. Familiar friends were on hand greeting guests and hamming it up for the cameras. Goofy remained ever elusive but he was dressed to the nines just like his pals Mickey, Minnie, Chip and Dale. 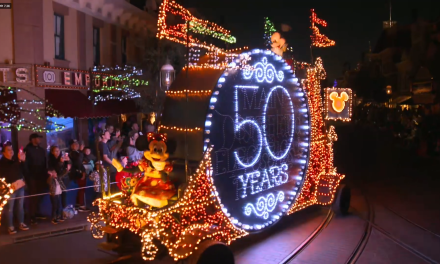