A gloomy weekend fighting for sunlight loomed over the Disneyland Resort as it undergoes final preparations for next week’s big #Disneyland60 Diamond Celebration kickoff.

We stopped by the parks briefly for a look at the newly opened Grizzly Peak Airfield and also caught some of the setup for the taping of the Kelly and Michael show in Disneyland. Plus, new blinged out decorations are appearing all over the resort including new photo-ops at the Disneyland Main Entrance and on Buena Vista Street.

Disneyland was quite popular in the morning with the queue to get in stretching PAST the central compass point.

New decorations have appeared over the turnstiles.

A new giant 60th sign has appeared over the floral.

Here you leave today and enter the world of yesterday, tomorrow, fantasy, and DIAMONDS. Lots of DIAMONDS. A big commotion going on this morning on Main Street. Disneyland, This and That

Wait times at around park opening.

Cinderella popcorn buckets are here. Grab ’em while they last!

Gotta love those rare moments when there’s nobody at all in front of Sleeping Beauty Castle, or at least not on the bridge. Ready for my close-up Mr. Demille.

A few aesthetic questions but overall so pretty!

Scaffolding coming down at Village Haus. The Frozen freeze has definitely thawed in Fantasyland!

Remember Rapunzel’s tower? Who will be the next feature film characters to invade here? Will Princess Moana head to Adventureland? You got me stumped, where’s the smoking section?

Emporium shelves just waiting to be stocked with #Disneyland60 merchandise.

Brand new bunting has gone up on Buena Vista Street to match the #Disneyland60 decor at Disneyland.

Bunting everywhere. Or drapes in the case of Carthay Circle.

Unfortunate sightline with those overlapping like that but both respectively great additions.

I wonder if the new diamond caps will light up at night?

Grizzly Peak Airfield has finally emerged from its refurbishment as the former Condor Flats. The National Park theme from the Grizzly Peak attraction area has been broadened into the former Condor Flats area, retaining the Airfield theme but set in the picturesque forest vs mountain desert. A great new–or I guess old–Rambler has appeared in the area to help reinforce the new mid-century theme of the area.

A nice map of the area. You’ll find all the areas noted here on the map are actually carried throughout the themeing in the land, especially inside of Humphrey’s. Tons of great themeing to help establish the theme. A new shop featuring tons of merch befitting the area. Condor Gas remains a tribute to the land before it. A nod to the past. Funny enough, they don’t actually sell the coonskin caps.

Some of the shop’s previous themeing remains but altered towards the new Air Fire Fighters theme. That mouse is just plane crazy.

A plane in disrepair has turned into some rental canoes. Bric-a-brac on the shelves reinforces the Supply/Service station vibe. PLANES merch is a must. Fun themeing details in the shop. Even the bathrooms got a new paint-job. Even the plane got a new painjob. It won’t be going anywhere on that flat tire!

A strange juxtapostion but it works!

Disney California Adventure, This and That

Too bad there’s now no official place to promote the Muppets since they have a new TV show coming to ABC….

The exterior to Disney Animation increasingly starts to stick out as it remains in need of major refurbishment. Or perhaps a fresh start over would be better suited?

Off the Page always remains a fun attraction in and of itself.

Artist Britni Brault created this beautiful one of a kind paper Maleficent sculpture which you can bring home for the low low price of $2000. Check out the time-lapse video below of her making it! Don’t know why I love this concept so much. Great mashup of Main Street Electrical Parade, Pete’s Dragon, and Mickey Mouse.

The Downtown Disney’s new paintjob is really rather fetching. First time I’ve ever NOTICED the sign in all the years it’s been there.

A 60 has appeared on the Mickey and Friends parking structure entrance signage. Increased demand for handicapped-accessible parking has prompted Disney to reserve more spots than before.

Looks like new signs went into Mickey and Friends. Not sure how long ago this was but they’re nice and bright… like the future. Or at least the future depicted in TOMORROWLAND. Oh hey, did you know we just reviewed that film? TOMORROWLAND, a great big beautiful movie review. 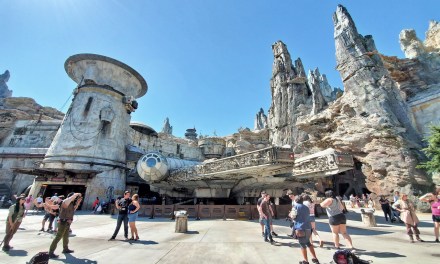 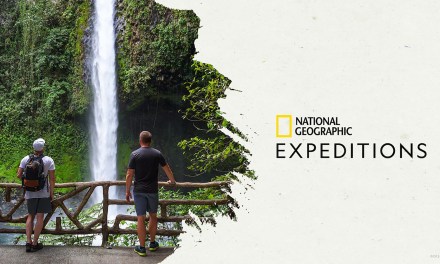