Take me to Tomorrowland! I’ve already been and I want to go back! The only problem? There might not be a lot of people with me on the journey.

From watching the commercials, trailers, and clips for this, you might be a little confused with what exactly the movie is about and that’s not by coincidence… it’s quite a departure from the type of mainstream fare you might be used to for Disney.

That’s not to say that TOMORROWLAND is a dark and mysterious art piece but the concept is not so easy to convey in the typical consumable 2-minute trailer. Brad Bird himself admitted this a few weeks ago when he introduced the picture at a screening at the TCL Chinese Theater. He also kindly pleaded that we not spoil any plot points to help maintain the secrecy of the story.

So the hype is built extremely well and yet once it was over the credits ran, I was left wondering… well what exactly was all the hullabaloo and secrecy for? I guess in a sense I just felt a little cheated waiting for a big reveal or thought-provoking ah-ha moment that never seemed to arrive.

That’s because I truthfully DID like it. The only problem is it all just feels FAST. And yet, it doesn’t feel short. Despite being ABOUT Tomorrowland, our time actually visiting there feels so disappointingly short. Perhaps that’s credit due to the amazingly crafted environment but I was left wanting to see and explore so much more.

Every single environment for that matter just feels so perfect. Whether it’s the wondrous Tomorrowland itself, the enchanting 1964 New York World’s Fair, or George Clooney’s deceptively high-tech country home, it’s all so beautifully crafted that you want to just stay a little longer and chew up all the gorgeous scenery.

I honestly can’t wait to get this on Blu-ray so that I can pause and take it all in. Whether it’s the quick cameo of Space Mountain or the flash of the Autopia-reminiscent highway or the undoubtedly dozens of in-jokes, hidden Mickeys, and other Easter eggs… it’s all so captivating but passes by so quickly.

So it’s about what?

Without getting into spoilers, the story centers around modern day girl-genius-rebel-renegade Casey Newton (Britt Robertson) who, along with mysteriously wise Athena (Raffey Cassidy), embarks on a journey with Frank Walker (George Clooney) to get to Tomorrowland and find Governor Nix (Hugh Laurie).

Cassidy is absolutely phenomenal in the role, evoking that infectious charm reminiscent of any and all of Walt Disney’s own Mousketeers. Take a little Annette, a dash of Darlene, mix in a dash of Caren and a heavy dose of Doreen and you get the adorable bundle in the character of Athena. Robertson, however may be a more polarizing lead. She seems to embody perfectly well the NEW feel of a Disney Channel kid. She’s spunky and unique, smart and quirky. Take a dose of Girl Meets World, sprinkle a touch of Hannah Montana and a dash of Jessie and you start to get an idea to whom she’ll appeal.

In a film decidedly full of nerdy characters, Clooney also plays a big ol’ nerd himself. He brings a quirky character to life with his typical dose of charm, wit, and comedic timing. Laurie is brooding, grumpy, and mysterious; cast perfectly to type.

The journey itself is a fun one with surprises abound as we learn more about the mysteries of Tomorrowland. It’s tough to really full out love this because its utopia/distopia-centered theme is hardly a new concept and it’s not told in any particular new or fascinating way.

It also feels just a little without focus, it’s also not immediately clear exactly for WHAT end result we’re moving towards and yet we’re moving there at such a frantic pace throughout the film you hardly have time to wonder WHY? Still, it does have that subdued quirky DNA of a Brad Bird picture. It seems that the appeal of this is going to be similar to Saving Mr. Banks in that its cachet is most squarely aimed at the fans and nerds. In this case, Disney nerds. Present! Hi, here’s my D23 card.

At the same time, it has a broader appeal with a great sense of general adventure; one that you don’t see a lot because it never seems to pay off at the box office. And yet these are the types of films that become cherished cult classics.

For me, TOMORROWLAND ranks amongst other great fantasy adventures including Princess Bride, Labyrinth, Zathura, and Super 8. It has the realistic and approachable vibe of a Stand By Me with the playful adventure of The Goonies. Basically, it’s a movie that 11-year-old me would REALLY REALLY like. And hey, 31-year-old-me really likes it, too.

But will it have legs (or a jetpack) to soar at the box office? It doesn’t seem likely… there’s a great big beautiful tomorrow and it’s just a week away.

TOMORROWLAND opens in theaters May 22. 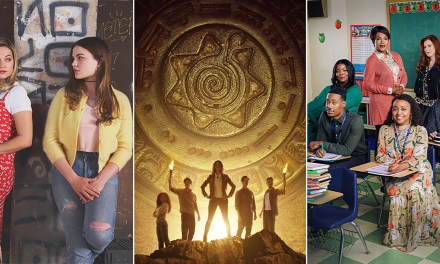