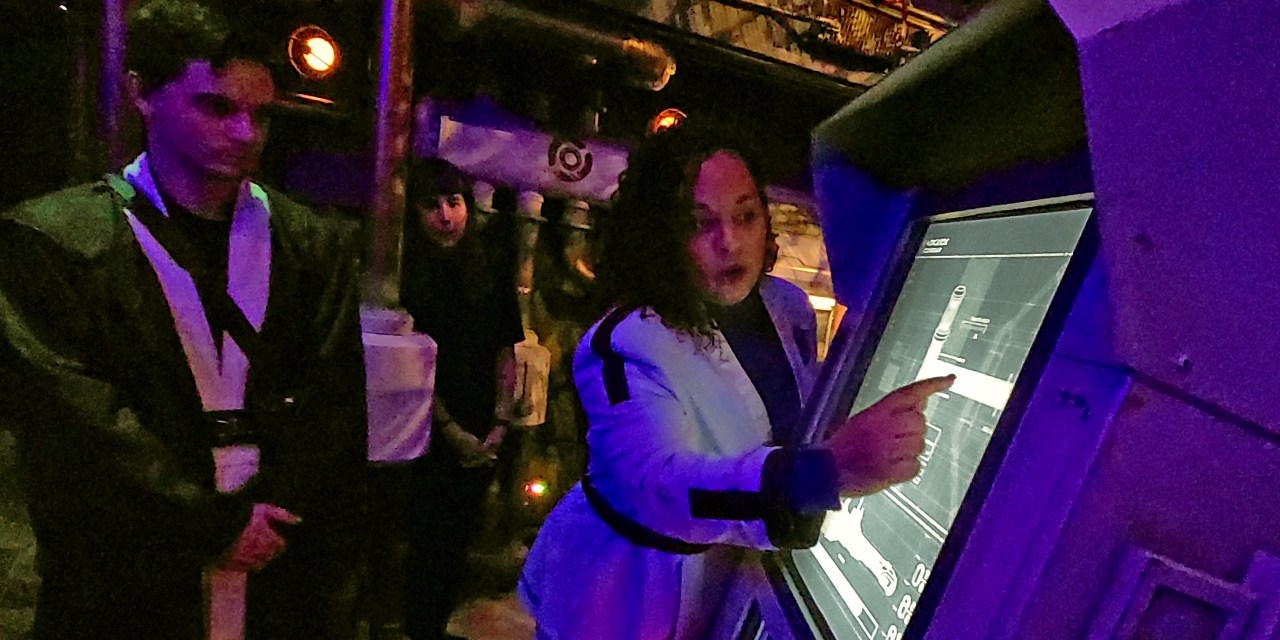 As we continue our on-site coverage of the brand new Star Wars: Galactic Starcruiser, we’re sharing the experience we had with a secret meeting in the ship’s engine room. Beyond just one of the many standalone missions, we inadvertently discovered some of Disney’s truly remarkable over-arching story design which is the cornerstone of the entire adventure.

Covert missions, secret meetings, and accessing “off-limits” areas are all part of the interactive story elements built into the experience. One such mission was a special VIP tour of the ship’s normally off-limits engine room which was a front for some heavy duty Resistance reconnaissance.

What you can see in the full video of the engine room moment above is that we quickly learn the First Order has put mechanisms in place to seize control of the ship. The collective goal for our group is to sabotage their plot by undertaking a series of repetitive maneuvers on various engine components to undo the system overrides.

The engine of this Starcruiser is obviously going to have complex machinery and thus require multiple people in small teams working in unison together around the room to thwart the First Order. But beyond completing the collective objective at hand, we realized how Disney crafted a truly well-planned and thought-out story experience.

The seemingly innocuous mission revealed a much grander narrative design when I compared notes with fellow passengers. I learned later in the day from a passenger who was not in my group that he’d actually been working with the First Order earlier that day to install all those exact overriding mechanisms that we’d sabotaged. So the setup for our mission wasn’t just a fabricated backstory to get our group to fiddle around with the machinery for a few minutes; the First Order and their cohorts (of other passengers) had actually literally been in there setting up the events that would unfold for my group later.

While there’s more passive and less story-intensive moments to enjoy on-board, what’s truly remarkable here is how Disney has crafted a living story adventure that truly does have tailorable levels of customization. Perhaps what’s most impressive is how they’ve weaved all of these story elements together to form a cohesive 40+ hour experience. While ultimately all the missions will invariably lead to the same explosive finale at the end of night two, the most rewarding components of Star Wars: Galactic Starcruiser are going to be those reflective moments, interacting with both cast and passengers, and living out this incredibly well-crafted story. You’ll feel as if you’ve just lived through an entire Star Wars movie.

It’s very easy to look at pictures and videos of the amenities onboard and find it hard to see value in Star Wars: Galactic Starcruiser as a cruise ship experience. We’ve shared thoughts already on exactly the conundrum Disney faces with marketing this first-of-its-kind offering for the Mouse. The fact of the matter is that this is NOT a cruise ship experience; it’s an inventive new storytelling format that uses a cruise as it’s backdrop. More traditional cruise amenities — a pool, a spa, shows, etc. — are missing here to round this out as a cruise-style vacation but ultimately those are not the point of dropping the mid-four-figure price tag.

If and when I’m able to make the full trip for Star Wars: Galactic Starcruiser, you can bet you’ll find me onboard. I just hope that it’s some time soon!