As Disney continues cycling through their inherited roster of 20th Century projects, we get a first look at the upcoming RON’S GONE WRONG with a new trailer and poster for the upcoming U.K.-based Locksmith Animation feature.

The animated comedy adventure, which stars Zach Galifianakis, Jack Dylan Grazer, Olivia Colman, Ed Helms and Justice Smith, promises to be a touching and comedic look at the budding friendship between a middle-school boy and his faulty robot. 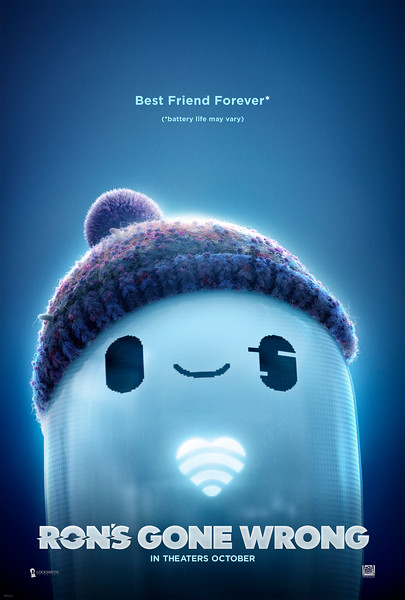 RON’S GONE WRONG from 20th Century Studios and Locksmith Animation is the story of Barney, a socially awkward middle-schooler and Ron, his new walking, talking, digitally-connected device, which is supposed to be his “Best Friend Out of the Box.” Ron’s hilarious malfunctions, set against the backdrop of the social media age, launch them into an action-packed journey in which boy and robot come to terms with the wonderful messiness of true friendship. “Ron’s Gone Wrong” features the voices of Zach Galifianakis (“A Wrinkle in Time”), Jack Dylan Grazer (“Shazam!”), Olivia Colman (“The Crown”), Ed Helms (“The Office”), Justice Smith (“Jurassic World: Fallen Kingdom”), Rob Delaney (“Deadpool 2“),  Kylie Cantrall (“Gabby Duran and the Unsittables”), Ricardo Hurtado (“The Goldbergs”), Marcus Scribner (“Black-ish”), Thomas Barbusca (“Chad”).