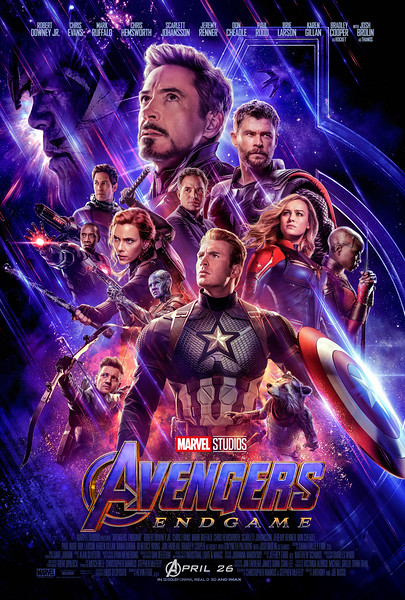 It’s nearly impossible to write this review and not speak about AVENGERS: ENDGAME in and of itself. To do so would spoil things, even small things, and no one should rob you of that experience.

Is ENDGAME worthy? Yes. Is it what I expected? Yes, and no. I think most fans will be pleasantly surprised by much of what comes to fruition in Marvel’s 22nd film.

Trailers reveal a glimpse of who is suiting up to go after Thanos (Josh Brolin) and avenge the fallen, so it will come as no surprise that Captain America (Chris Evans), Thor (Chris Hemsworth), Captain Marvel (Brie Larson), Tony Stark (Robert Downey Jr.), Nebula (Karen Gillan), Rhodey (Don Cheadle), Rocket (voiced by Bradley Cooper) and Natasha (Scarlett Johansson) are together and trying to track down the big purple people eater.

What comes next does make the three hour run time fly by. Directors Joe and Anthony Russo have pulled off something major here, and in all respects, the film is superior to last year’s AVENGERS: INFINITY WAR. There are stylish action sequences, melancholy character shots, cameos, fan service, you name it – it’s in here, and it’s beautifully shot.

Juggling a cast of behemoths is no easy feat, and ENDGAME gives everyone their due without things getting confusing. Writers Christopher Markus and Stephen McFeely surely deserve a long vacation after assembling this puzzle. The Marvel story trust lead by Kevin Feige, who has orchestrated an unprecedented achievement with the Marvel Cinematic Universe, no doubt helped ensure the story tied together every conceivable strand previously set into motion.

We take Marvel for granted now, but in 2008 (and for a few years thereafter!) it was far from a sure bet. Downey was not the superstar he is now. Marvel brought his career back from the brink, while simultaneously launching careers for now-superstars Evans, Hemsworth, Pratt. Lots of Chrises, mostly.

The idea of a web of interconnected movies that relied on each other to make sense was anathema to the movie business, and after THE AVENGERS took the world by storm in 2012, every other studio wanted in on the cinematic universe game. Universal tried and failed (twice!) with their Dark Universe monster series. Sony actually toyed with a Robin Hood cinematic universe (???). Warner Bros, which owns DC Comics, gave it a go and it didn’t really turn out. They’re just now finding their footing with recent hits like WONDER WOMAN and SHAZAM, while JUSTICE LEAGUE was a misfire.

No one has replicated Kevin Feige‘s incredible balancing act, and now, no one’s trying. 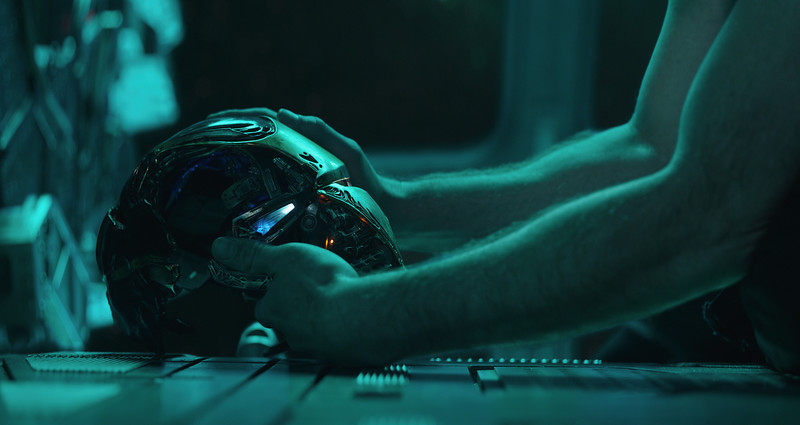 ENDGAME really belongs to Downey, who is now an institution and giving a performance that shows the incredible growth and trauma Tony Stark has endured since we first met him in 2008’s IRON MAN. INFINITY WAR ended with Stark’s fate in doubt, and ENDGAME gives Downey a chance to show us every side of a character that clearly runs through his veins.

Right on his heels is Evans, who has made no secret of his plans to hang up his shield. Evans is so good in a role that would be so easy to mess up. It’s a pleasure to see Steve Rogers take center stage again, and every scene of his will leave fans cheering (unless you preferred his bearded look!).

Hemsworth gets to flex his muscles in new ways here, broadening Thor and building on the groundwork laid for him in THOR: RAGNAROK. Johansson nails the broken down Natasha, grappling with a new existence that just shouldn’t be. Rudd is effortless and charming, as always.

It’s embarrassing (to other studios) how good everyone is, and how something that was not too long ago thought of as silly has broken so many records and busted so many genres.

At the end of the day super hero movies live or die off the characters – why we love them, why we root for them, and what matters to them. The Avengers aren’t just jumping buildings and chasing MacGuffins. People matter to them, and their dedication to each other and to perfect strangers is what drives them to put their (considerably plussed) lives on the line.

The Marvel Cinematic Universe will continue to grow and once ENDGAME fever subsides, we’ll start to hear about what’s next for the little studio that could. Maybe then it will be safe to post articles dissecting the story devices and intricacies of ENDGAME, because there are many and they’d be worth dissecting! Fans around the world have been waiting literally years for this, so once you’ve seen the spectacle, do your part to respect everyone else and #DontSpoilTheEndgame.