RALPH BREAKS THE INTERNET might have proven to be a financial hit but it perhaps was not quite the pop culture juggernaut as the original release. Taking the classic mix of characters and throwing them into modern day internet was truthfully a little bit confusing and a lot bit overwhelming. Still, at its core is a story about the strength friendship and even a dual purpose addressing empty-nester syndrome.

Regardless, the foundations of the franchise are strong and the characters are unforgettable. So it was a pleasure for us when we were offered the opportunity to receive a review copy of the film which is now available on home release.

What we found here is a bunch of fast-paced extras matching the quirky irreverent tone of the sequel.

How We Broke the Internet is a great 32-minute bit of content that’s served as a full interrupted piece but also (confusingly) broken up into chapters on Movies Anywhere. We always prefer the la carte approach to the making-of feature but they’re presented out of order and without context on the site; a persisting issue which remains to be an unaddressed for digital material. Regardless, the various elements of this documentary are really great going into some of the unique and fun elements of the film’s production.

Surfing for Easter Eggs is always one of my favorite things to do with movies. In fact, I did just that with the very first trailer for this very film. There’s some great finds here but they show so very few in a film that is bursting at the seams with hidden surprises. This could have easily been twice or triple the length to really feel like a notable feature, instead it feels like a teaser to promote what this feature SHOULD have been!

BuzzzTube Cats is a funny and oh-so-random collection of clips created to play on the computer screens in the film. Obviously, in the world of the internet, there are TONS of cat videos so animators got to go wild and make a bunch. Even when they’re animated, cat videos are hard to resist!

One feature I wasn’t even expecting for this title — much less 10 minutes long — is about the music. The Music of Ralph Breaks the Internet dives in to the score and how it varies for the tender moments, the internet, the arcade, and more. There’s also a nice bit with Alan Menken and Sarah Silverman going over her princess song which is fun to see and we also dive into the process for creating some of the song’s contemporary songs which we also get presented as full music videos in separate bonus feature form.

A selection of five Deleted Scenes with director intros (Into the Internet, Opposites, Domestic Hell, Bubble of One & Recruiting “Grandma”) and the two Music Videos we mentioned above (for “Zero” by Imagine Dragons and “In This Place” by Julia Michaels) are also included as an expected way to round out the standard selections.

Some digital exclusives, you say?

RALPH BREAKS THE INTERNET is available now digitally in HD, 4K Ultra HD™  and Movies Anywhere and on 4K Ultra HD and Blu-ray™. 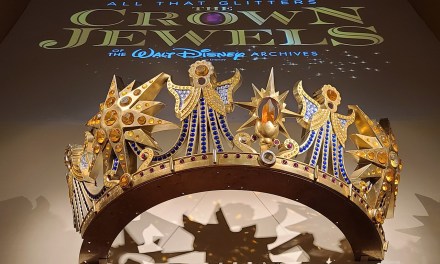 FINAL DAYS: “All That Glitters: The Crown Jewels of the Walt Disney Archives” at Bowers Museum ends Jun. 19