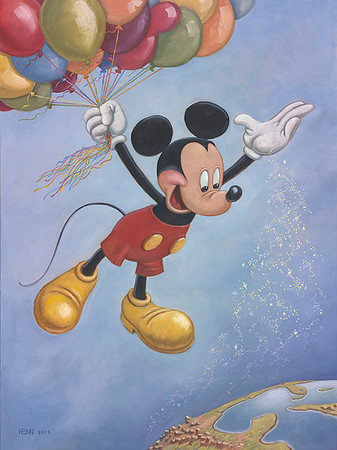 MouseInfo is covering San Diego Comic-Con all weekend long and this evening we attended the Celebrate 90 Years of MIckey Mouse panel — the first-ever #SDCC panel held by Disney D23 — and we were amongst the very first to see the brand new official portrait of Mickey created by Disney animator and artist Mark Henn! We’ll have more on the panel later but for now we’re taking a better look at the awesome new painting titled “Spreading Happiness Around the World”. It will also be featured on the cover of the upcoming Disney twenty-three magazine!

The unveiling of the new work—the latest in a longstanding series of Mickey birthday portraits—took place during the panel “Celebrating 90 Years of Mickey Mouse with D23: The Official Disney Fan Club.”

Since his big-screen debut in Steamboat Willie on November 18, 1928, Mickey has been the global ambassador for The Walt Disney Company. From the beloved Mickey Mouse Club to today’s Mickey Mouse cartoon shorts, Mickey’s optimistic outlook and endearing personality continue to delight fans around the world every day. D23 and the Walt Disney Archives, in partnership with Walt Disney Animation Studios, commissioned Henn to paint Mickey’s official birthday portrait. Henn follows in the footsteps of artists such as Disney Legend John Hench, who crafted five of Mickey’s official portraits.

The portrait is just one of the many ways Disney is celebrating the landmark anniversary of this beloved character: