Review: PIRATES OF THE CARIBBEAN: DEAD MEN TELL NO TALES is worth another voyage at sea

If for no other reason, you should see PIRATES OF THE CARIBBEAN: DEAD MEN TELL NOT TALES for the last 20 minutes. While we won’t get into spoilers in this review, all that we will say is that the latest return to the high-flying adventure brings with it trademark laughs, larger than life hijinx, and an ending that left us with all sorts of feels.

From the ending that ties together a bunch of strings to the end-credits scene which brought the biggest goofiest smile to my face, I found myself excited once again for this franchise.

To say DEAD MEN TELL NO TALES is a true return-to-form would be a misnomer as it was not without its head-scratching decisions. But in a lot of ways, it does sail on friendlier waters of the first film of the franchise than the choppy seas of the over-the-top CG melee sequels which got progressively more and more absurd.

Now yes, you’ll see in all the marketing the walking dead and zombie sharks which are pretty high up there in terms of the cinematically absurd but it’s not all that much craizer than Curse of Cortes from Curse of the Black Pearl. Certainly, we go no where near the lunacy of At World’s End and it’s confusing calamity of chaos.

So is DEAD MEN TELL NO TALES worth it for a return to theaters?

If you’re a fan of the original movies then the answer is absolutely yes. It’s no secret at this point that both Orlando Bloom and Keira Knightly returned for this picture. I won’t go into specifics as far as their involvement but what I can say is that the return of these two characters to the franchise brought on feels within me that I didn’t even realize I had for them and their story.

If anything, it made me angry that On Stranger Tides even happened because for one, I don’t really remember much (except that there were mermaids which, truthfully, are always a win) but also that the film did nothing to connect us to these characters who made the initial trilogy worth the voyage to sea.

What DEAD MEN TELL NO TALES really cemented for me was that Will Turner and Elizabeth Swan are ever as much an important key to the success of these films as the headlining Johnny Depp and his character of Captain Jack Sparrow. While I love the bumbling salty wretch (who semi-annoyingly seems much more drunk and off-beat than ever in this jaunt) the films seem to work best when Jack is a bit more of the sub-plot than the primary through-line. It’s quite the conundrum. The films are nothing without him yet they must only rely on him in smaller doses.

That brings us to Carina Smyth (Kaya Scodelario) and Henry Turner (Brenton Thwaites) who are the main protagonists for this adventure. While Scodelario’s tough-as-canons demeanor brings to modern cinema another strong female character to admire, she has little chemistry with Thwaites who, despite portraying a character with a strong determination, seems entirely unmatched for his romantic counterpart.

Javier Bardem and his character of Captain Salazar also bring little into the fold. Feeling more like one of a stable of villains in an episodic formula, he does little to match the likes of Geoffrey Rush as Captain Barbossa or even Bill Nighy as the sadly-departed Davy Jones. In truth, his inclusion as the villain felt almost superflous to the storyline despite the main course of action being centered squarely on his connection to Jack Sparrow.

So while PIRATES OF THE CARIBBEAN: DEAD MEN TELL NOT TALES is not the perfect sort of reboot for the franchise, it certainly proved that there’s still some magic in the water assuming they stay on the right course. With no less than three hilarious and over-the-top action sequences and a decent amount of suitable connective tissue, it should have enough wind in the sails to muster a respectable box office and general interest.

PIRATES OF THE CARIBBEAN: DEAD MEN TELL NOT TALES  sails into theaters May 26, 2017. 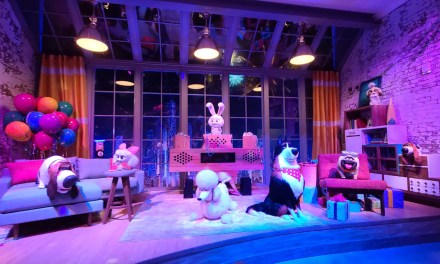