Actors Luke Evans (Gaston) and Josh Gad (Lefou) performed live their number “Gaston” from the upcoming BEAUTY AND THE BEAST at a press conference today in Beverly Hills. Gad took the opportunity to throw in a fun off-script jab during finale when spelling out Gaston’s name; “G-A-S-T– I believe there’s another “T”… I can’t remember because of this week’s news cycle which has been very distracting to meeee.”

Josh Gad and director Bill Condon made a lot of headlines this past week after making comments to the fact that Gad’s character of LeFou in this live action reboot of the animated feature will be gay.

Social media spheres quickly went ablaze following the announcement with many calling into question the notion of not just a villain but a character whose name in French means “the fool” to be the one representing one of the first gay characters in a Disney live-action fairy tale. Later responding to the hullabaloo, Condon shared with E! that the whole thing had been “overblown.”

Having seen the film ourselves recently, we can certainly attest (without getting into specifics since we’re under an embargo) that it’s beautifully done and subtle. Gad doesn’t go for caricature like many would have feared.

All that aside, Gad and Evans have fantastic voices and nailed the song both live and in the film. 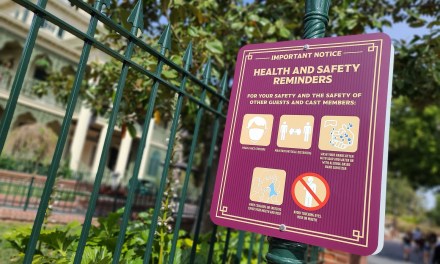 STEP INSIDE: A complete look at what it’s like to visit Disneyland right now