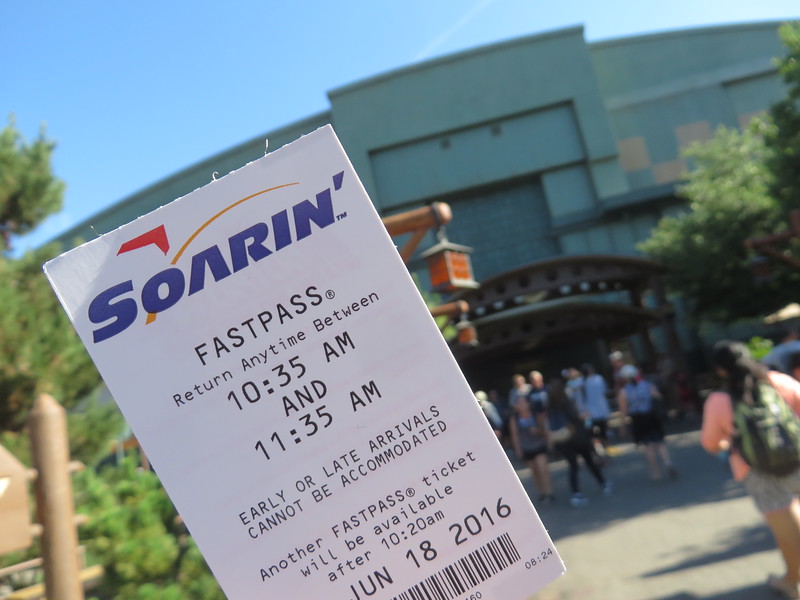 It was a scorching weekend at the Disneyland Resort with temps hitting well-above 100 degrees Fahrenheit in the afternoons. Although the heat did keep some crowds away from the happiest place on earth, it doesn’t change the fact that the whole resort is a hotbed of activity.

Some hot news buzzing around the parks was the fact that Soarin’ Around the World officially debuted this weekend. Replacing the popular Soarin’ Over California which spawned copycat attractions in Epcot and the brand new Shanghai Disneyland, the updated version features a new digital HD picture that’s pristine in clarity and ventures to famous landmarks across the globe.

Over at Disneyland, with the new comes the old and we found that after a few weeks of anticipation, Skyway Watch has come to an end with the complete demolition of the former loading area for the long-defunct attraction. The demolition comes as part of the efforts to bring the new Star Wars themed land to the western back end of the park.

We also noticed that FROZEN — Live at the Hyperion has quietly upped its show count to four shows per day. Eventually, Disney does aim to max out at 5 showings per day for the impressive new show. Other entertainment debuting this summer includes the Jammin’ on the Backlot dance parties that light-up the evening as a replacement for the retired Mad T Party.

All of this and more in our latest MouseInfo Pictorial Update! Enjoy!

Soarin’ Around the World debuts!

Soarin’ Around the World, not over the world or over California.

The attraction did sport a 90 minute wait but that was only after one of the theaters went down. Once the second theater was operational, the wait jumped back down to 45 minutes.

FastPass is a good route to skip the lines.

That memorably smarmy performance was iconic enough to remain!

Soarin’ Around the World in the maps.

See also: Jammin’ on the Backlot. More on that later.

Frozen — Live at the Hyperion

FROZEN — Live at the Hyperion has moved to four-shows per day. Disney will eventually get that up to five as they get comfortable operating the complex new show in the theatre.

FastPasses are required for all performances.

Since opening, the system has changed slightly and now assigns you to a viewing section. Not big fans of this.

It was a hot one so refreshment centers turned out to be popular destinations. It was still early morning at this point here.

Heading over to the former Big Thunder Trail for a closer look at the Star Wars construction…..

Sightlines blocked! A green tarp covers the knothole that previously provided up-close looks. Hungry Bear also doesn’t work anymore since tarps have gone up over the former peekable area at the back.

Sailing Ship Columbia continues to get touchups and work here and there.

“Skyway Watch” comes to an end. The chalet has been demolished bringing an end to the former nod to Fantasyland past!

A single lamp-post visible over the construction fence.

Back at Disney California Adventure…

Almost looks like you’ll see some scrapy news boys coming around the corner with a fresh stack of papes.

And they say Duffy was removed from Disney California Adventure!

Concerts return with the reopening of Silly Symphony Swings.

Always loved this shady little nook, one of the few hidden discoverable areas in the park.

A ride on Mickey’s Fun Wheel because there was time to kill before Soarin’ FastPasses.

Future site of Disneyland’s fourth hotel will be just about dead center of this picture, behind the rows of palmtrees the line the street.

Hopper points guests to It’s Tough to Be a Bug.

Puddle Parks offer respite from the sun. Dot has your back.

Forget your troubles, come on get happy!

Nick Wilde and Judy Hopps are quite popular denizens of Hollywood Land.

Finding Dory merch was in no short supply.

Oh Peter, do be careful!

Churro vendor? Balloon man? Alas, without Mary in tow it’s quite difficult for poor old Bert to draw much of a crowd. Now if he was in his Chimney Sweep getup he’d be pretty instantly recognizable. Then again, he’d also be melting.

Pirates of the Caribbean

Looks like lighting was enchanced in the fire scenes in Pirates. Especially in the jail scene and in the final scene before venturing back up the water fall.

No Davy Jones or waterfall but his audio was running.

A mighty fine way to find your chill.

Tarzan’s Treehouse has returned from refurbishment. Looks like the Whirlpool wasn’t installed yet. Thanks Shanghai.

Jammin’ on the Backlot!

Quite uneventful during the day, the former Mad T Party setup comes to life as Jammin’ on the Backlot.

Do you have your AP-exclusive popcorn bucket? We highlighted the new perk in a previous pictorial. Popcorn refills for $1 on this AP-exclusive bucket!

Just click through to Amazon from the widget below and a portion of your purchase will help us here at MouseInfo!