The Warner Bros VIP Studio Tour in Burbank, CA, has added a new interactive segment by opening Stage 48, a hands-on look at the process of making WB magic. You can step into FRIENDS’ Central Perk (even pick up Phoebe’s guitar and try your hand at “Smelly Cat”), board HARRY POTTER’s broom and fly over Hogwarts, experience GRAVITY’s mind-bending sound as its filmmakers did, and take in a display of dozens of props, sets and costumes moving you step-by-step through the production process.

It’s all part of the VIP Studio Tour, where small groups of guests are taken all around the historic Warner Bros lot to witness their favorite movies and television shows in production. The gala opening event started with red carpet celebrity arrivals, including Jon Cryer (Two and Half Men) and James Michael Tyler (Friends). Warner executives and Cryer then dedicated Stage 48 before invited guests got to experience its fantastic exhibits while sampling Central Perk’s coffee.

The VIP Studio Tour offers an intimate look at the Warner lot, with a very different experience than the nearby Studio Tram Tour at Universal Studios Hollywood. WB’s tour offers up-close interaction and is a can’t-miss – especially if you’re a FRIENDS, BATMAN or HARRY POTTER fan. There’s even an exclusive Deluxe Tour where you’ll get to hold an Oscar for a very special photo-op. Book tickets here and be sure to do so in advance of your visit.

Check out our full coverage of the event and the amazing new Stage 48!

Jon Cryer (Two and a Half Men) Upon entering Stage 48, first stop is a real-life Central Perk coffeehouse. May we recommend the cupcakes? They’re delightful! After fueling up at Central Perk, guests head into the interactive portion of Stage 48. Interactive exhibits take you from idea to execution – everything from casting to costume design. Don’t miss the incredible sound demonstration from GRAVITY, or the chance to hang out on the original Central Perk set from FRIENDS. And what geek wouldn’t love to design their own version of the Batmobile? If you’re feeling adventurous, you can mount a broom, Batpod or space shuttle to reenact scenes from HARRY POTTER, THE DARK KNIGHT and GRAVITY on a green screen. You can even take a photo or video of the experience home! Thanks to the team at Warner Bros for pulling back the curtain on their newest addition and giving us a sneak peek! We’ll be back – that couch at Central Perk is very comfortable. 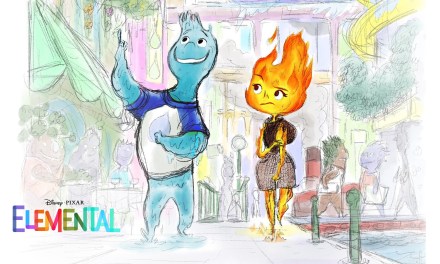 Disney-Pixar is ready to get ELEMENTAL on June 16, 2023 but will it be in theaters?