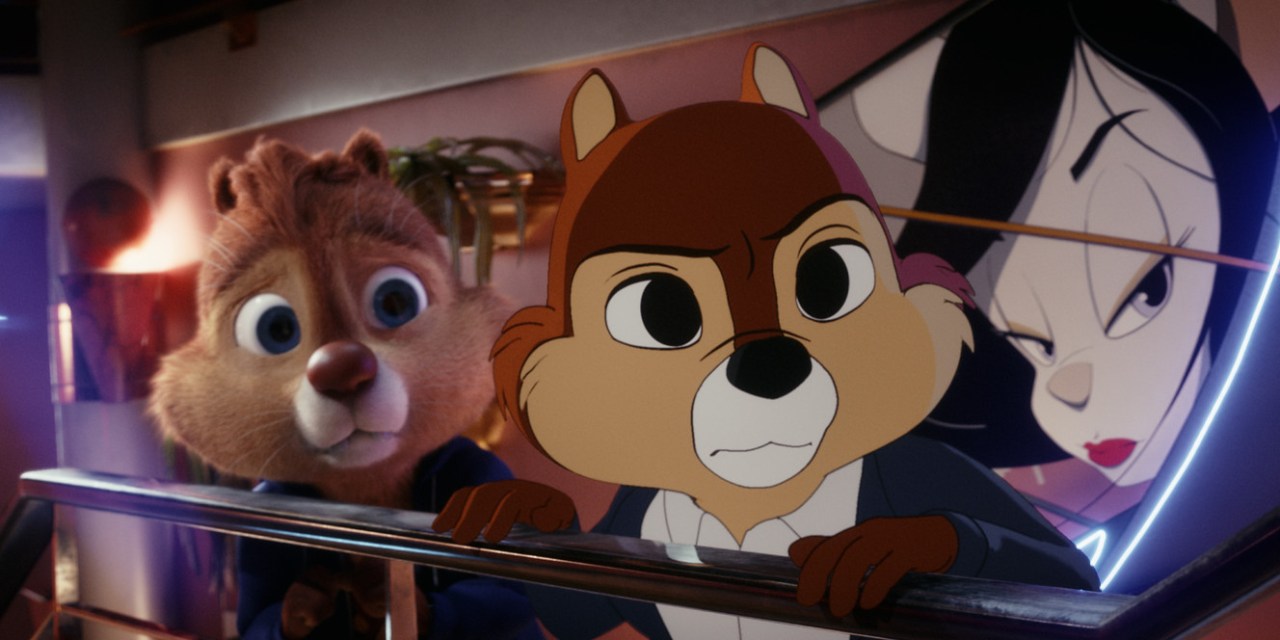 After years and years in development, CHIP ‘N’ DALE: RESCUE RANGERS is finally releasing as a movie and it’s coming to Disney+ this Friday. Disney fans have been in the throes of 90s nostalgia for quite some time but will this live up to the hype? The answer is gonna be pretty divisive but more broadly and more importantly, it’s is unexpectedly paving the way for a much bigger and zanier world.

What might have been the most predictable solution for adapting the Disney Afternoon cartoon of yesteryear would have been a straight-laced reboot akin to that of THE CHIPMUNKS — bring the characters to new life in our human world with a cute, funny, heart-warming new origin story. Instead, RESCUE RANGERS is a continuation of the lore established not exclusively in the 1990’s cartoon but also from the 1988 WHO FRAMED ROGER RABBIT which created a universe in which toons and humans coexist.

In essence, what CHIP ‘N’ DALE: RESCUE RANGERS is doing is cementing the fact that there’s a Roger Rabbit Cinematic Universe (we’re taking the moment to officially coin this the RRCU). A world where animated characters shill their cartoony talents is the starting point for this film so it turns out that these two gumshoes were never private detectives, they just played some on tv.

For many, the RRCU could be a huge turn off if they’re expecting a more wholesome re-imagining of this tale. Instead, the stars of the show are literal stars of a show and this movie picks up with them living in modern-day Los Angeles, largely as has-beens that have since moved on with their lives. Some more successfully than others.

And then… hilarity ensues. CHIP ‘N’ DALE: RESCUE RANGERS is a nutty thrill ride. Self-referential and indulgent, witty and ridiculous, it is absolutely going to ruffle some fur. So often, a movie’s jokes and plotlines can feel committeed-to-tedium yet that somehow doesn’t seem to be the case here.

While the story is far from inventive, the puns and backstories will prove childhood-ruining to purists and downright hilarious to the jaded types… ourselves, included. Honestly, you’ll ask, “how did that get approved?” several times before it’s over. The Rescue Rangers have grown up and that’s not going to be an easy pill to swallow for some.

RESCUR RANGERS pokes fun at Hollywood, fandom, convention circuits, absolutely nothing and no-one is safe. Your tongue will be so firmly pressed into your cheek it might leave a permanent mark by the end of this 1 hour and 37 minute adventure. Along the way, expect industry in-jokes (so much shade), Easter eggs, and a TON of cameos not just from the house of Mouse but from a wide variety of IP… the good, the bad and the… UGLY.

Does it all work? Yes and no. Do we want to see way more of this newly-revived RRCU that’s being established? YES, YES, and YES.