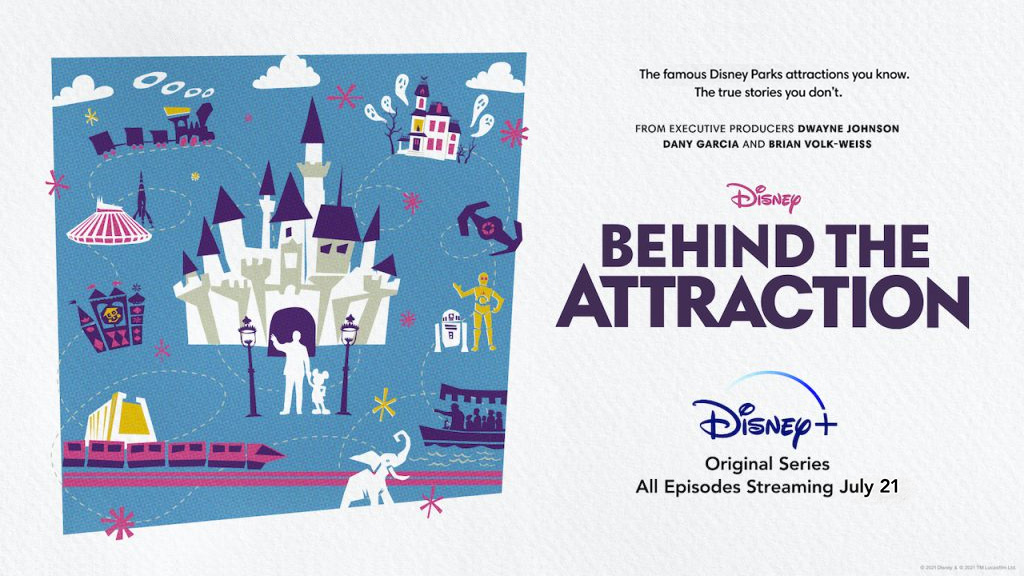 Every episode of the brand new BEHIND THE ATTRACTION on Disney+ is honestly a must-watch but today in celebration of Disneyland’s 66th anniversary, we’re breaking it all down for you, sharing everything you need to know about the amazing new series.

The show has a decidedly quirky vibe and is narrated by Paget Brewster whose voice you might recognize from the recently completed DuckTales reboot. Think of the Disney Channel “Imagineer That” vignettes from the late 1990s and then cross those with a Saturday afternoon behind-the-scenes cable channel special and that starts to hone in on what to expect.

While being funny and irreverent, BEHIND THE ATTRACTION also does a good job of paying respect to the history of each respective episode’s topic. The approach should do well to keep the interest of both the history nerds who just want black and white footage and anecdotes but also the littles who would otherwise get wiggly in their seats. It’s an effective balance to cast a wide net to garner and maintain interest.

It’s a lot to take in at once but we’ve combed through all TEN episodes for you. We’ve ranked them all so you can prioritize the best ones to binge once they all drop on July 21, 2021! ENJOY! 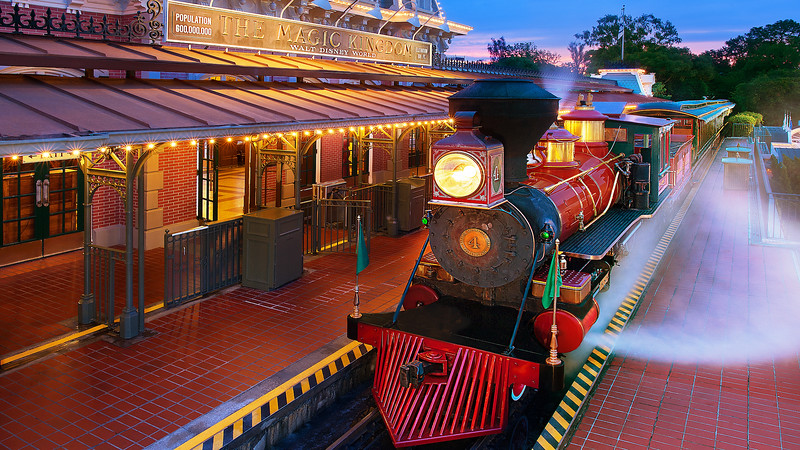 WHAT WE LOVED: Awesome insights and archival footage and also a section dedicated to changing up the attraction for Guardians of the Galaxy. Great interviews and backstories including plenty from Coulter Winn on the evolving concept from hotel within a ride to a ride about a hotel. This episode is absolutely jam-packed!

WHAT WE LOVED: Some really fantastic footage from 1964-1965 New York World’s Fair and an awesome backstory that we didn’t know about actress Joan Crawford being absolutely pivotal for this attraction existing in the first place! Plus, awesome stories about bringing Mary Blair out of retirement, establishing the flume, and all of the figures and costumes.

WHAT WE LOVED: Donald W. Ballard is a premier Disneyland Hotel expert featuring prominently here with the history from Walt’s partnership with Jack Wrather to the colorful history which included tennis courts, sandy beaches, a marina, a dentist’s office, and even its own radio station, K-EZY AM1190!

WHAT WE LOVED: The stories we know, the stories we love, this is a great refresher course for ardent fans with some amazing extras including audio of Paul Frees from his narration recording sessions. There’s also a lot of great stuff with Rolly Crump including his story of Walt Disney calling him an SOB, and the hinjinks he played on the overnight custodial crew while the attraction was in development. Some great insights on ALL versions including Tokyo and Paris and even Mystic Manor.

WHAT WE LOVED: A great episode touching on Walt’s initial idea to take the successful Matterhorn experience and expand it into something completely new and different. We also learn about ALL the variations in other parks (except the short-lived Rockin’ marketing campaign) including the “evolution” of the concept for Shanghai with TRON Lightcycle Power Run which is also coming to Magic Kingdom in Florida.

WHAT WE LOVED: It’s a bit of a jump (to lightspeed?) but the episode takes the opportunity to talk about Star Wars: Galaxy’s Edge — which should be expected — but earns its keep by surprisingly actually showing how the turntable load system works for Millennium Falcon: Smuggler’s Run. Otherwise, the episode does have some great stories about the actual Star Tours attractions world wide including the casting of Paul Reubens and some great footage including the actual original simulator that would come to be the basis for the custom-built Disney version.

WHAT WE LOVED: As an executive producer for the series (and star of the upcoming film based on the attraction) Dwayne Johnson features unsurprisingly here talking about the cherished attraction. The episode has great anecdotes, images, and footage of notables including Walt himself plus Bill Evans, Harper Goff, and the late Ron Dominguez (to whom the episode is dedicated).

WHAT WE LOVED: Starting at the place where the magic started, the only park that Walt Disney got the chance to enjoy, we learn about the origins and evolution of Sleeping Beauty Castle (why her, why that look, why that size) and continue on to each of the other castles in the other parks including the heavy feng shui direction for Hong Kong and the massive scale for Shanghai. Plus, the awesome Tom K. Morris on the stunning Disneyland Paris version.

WHAT WE LOVED: From the early origins of Liberty Street at Disneyland to the evolution of the concept into Liberty Square at Magic Kingdom, we get a full look starting with world’s first human Audio-Animatronics figure of Abraham Lincoln at the World’s Fair (and the chaos induced by frequent power surges) to the current attraction as its seen today in Florida. The episode also touches EVER so briefly on evolving human figures to this day including for usage with stuntronics like we can now see today in Avengers Campus.

WHAT WE LOVED: While this episode is ranked last on this list, that makes it no less worthy of a watch. The difficulty here is its ambitious scale of things to cover starting with Walt’s backyard locomotives to the broader evolution of larger-scale trains, trams, monorails, and boats. The legendary Bob Gurr features here to great effect. 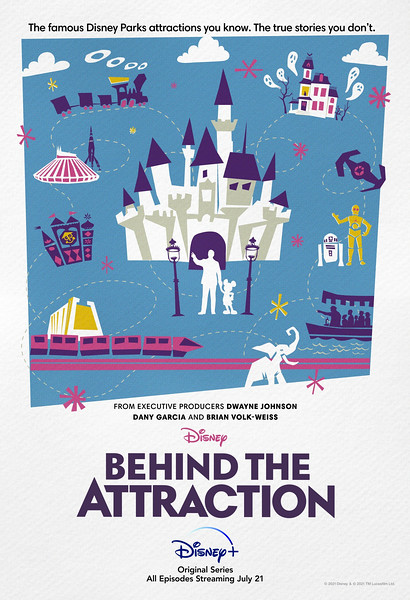 BEHIND THE ATTRACTION features both archival and new exclusive interviews with Disney Legends, dozens of past and present Imagineers, and more including: