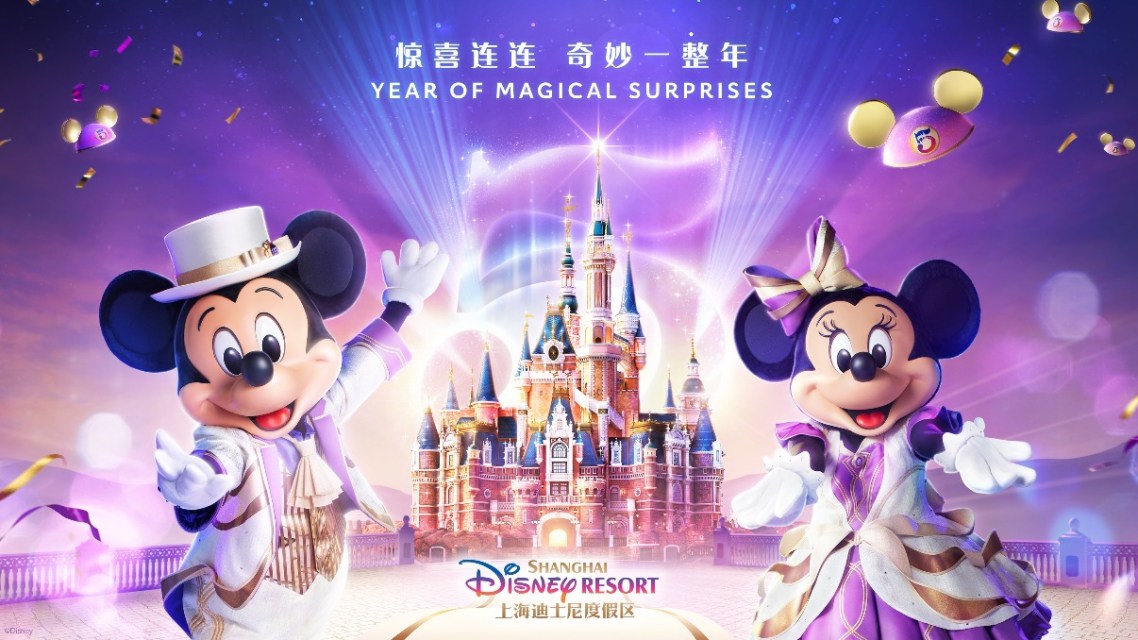 It’s still hard to believe that it’s already been five years since Shanghai Disney Resort first opened its gates in 2016 but now the destination is ready to celebrate in style with the Year of Magical Surprises celebration starting April 8, 2021!

The spectacular year-long celebration brings a SLEW of offerings from in-park and and in-app surprises similar to those seen during Disneyland’s Year of a Million Dreams celebration plus new entertainment, shopping, and dining experiences. It’s going to be a huge celebration! 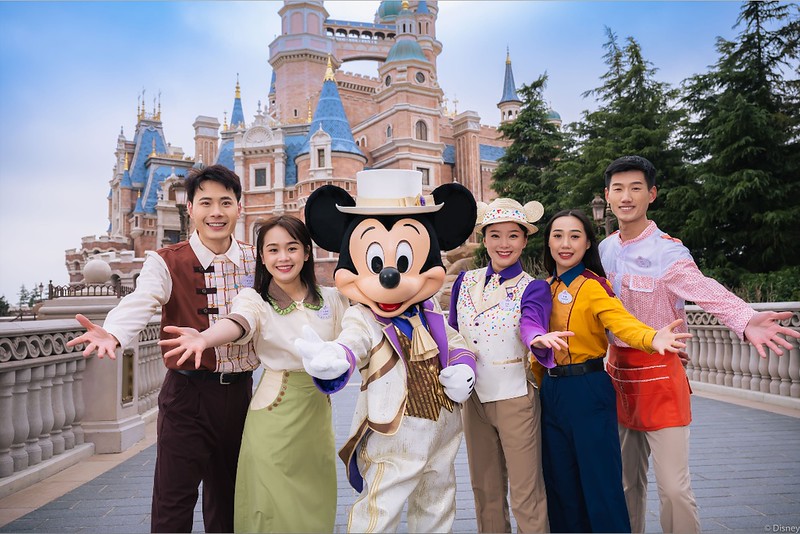 A Surprise Squad comprised of Cast Members will appear at different times and locations throughout the day, randomly greeting guests and unveiling additional exciting surprises, including birthday souvenirs or an opportunity to be invited to spin the “Disney Surprise Wheel!”

Performed up to four times per day on the Pepsi∙E-stage in Tomorrowland. Lucky guests chosen by the Surprise Squad will be able to spin the “Disney Surprise Wheel” during the show and win an incredible prize including….

On most days during the celebration, a grand prize – the “Magical Star of the Day” – may be presented to one guest among those in the show, who will receive a “Golden Key” that allows the guest and their party onsite (up to four) to enjoy a series of exclusive new offerings at Mickey’s Magical Star Lounge – located at the park’s prestigious Club 33. 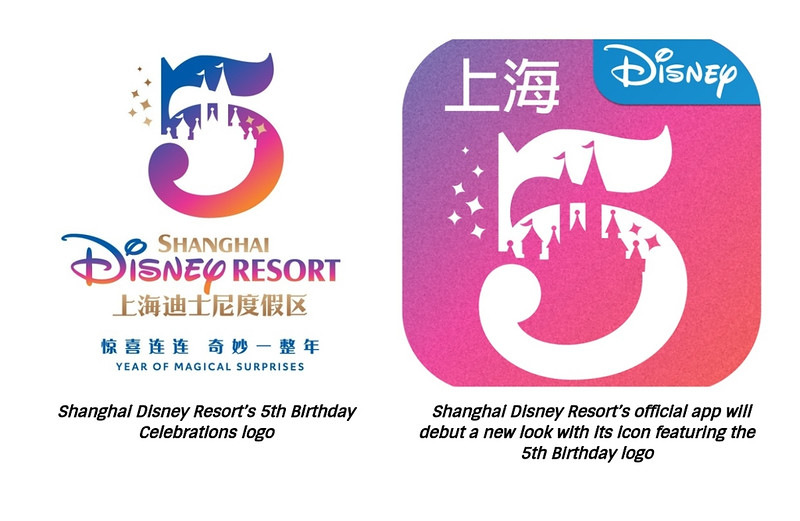 Shanghai Disney Resort’s official app will soon debut a new look with its icon featuring its 5th Birthday logo, and starting April 8, an all-new “Tap for a Magical Surprise” feature will allow guests to enter into a digital lucky draw to win a special prize upon entering the theme park! Surprises include…

Detailed Terms and Conditions for the resort’s 5th Birthday offerings will be available on the resort’s official website and app at a later date.

Presented on the world’s largest and tallest Disney castle with brand-new content, amazing storytelling, and some of the world’s most cutting-edge technology, this all-new nighttime spectacular is a highlight of the resort’s 5th Birthday Celebrations. 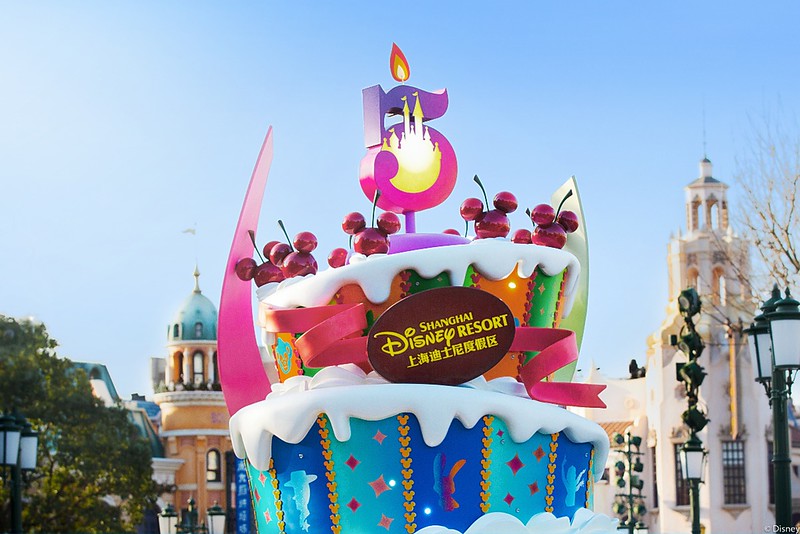 The parade itself will get an all-new birthday overlay, with each parade float featuring hidden 5th Birthday elements for guests to discover as the procession winds its way along the longest Disney parade route in the world.

Special celebratory bunting and “5” icons will also be added to the opening float, Casey Jr., ridden by Mickey Mouse and Minnie Mouse, followed by a train car for Donald, Daisy, Goofy, Pluto and Chip ‘n’ Dale. The décor will also feature on the finale float that features Duffy and his friends.

Mickey Mouse, Minnie Mouse, and other beloved Disney Characters will be dressed to impress in all-new outfits – welcoming guests to the big party. Custom-made for Shanghai Disney Resort’s 5th Birthday, their new looks perfectly capture the essence of the grand celebration, highlighting beautifully designed celebrative elements of ribbons, a color palette of ivory and champagne gold, as well as hidden details in the shape of a “5” in celebration of the resort’s special occasion.

Many rarely seen Disney Characters will also make surprise appearances in the park throughout the year, providing an extra sprinkling of Disney magic for guests.

In celebration of the resort’s 5th Birthday, a new selection of songs will fill the air during Shanghai Disneyland’s daytime and evening entertainment. From all-new compositions, to fresh takes on Disney classics, the new high-energy songs are sure to get guests in the spirit of the celebration. 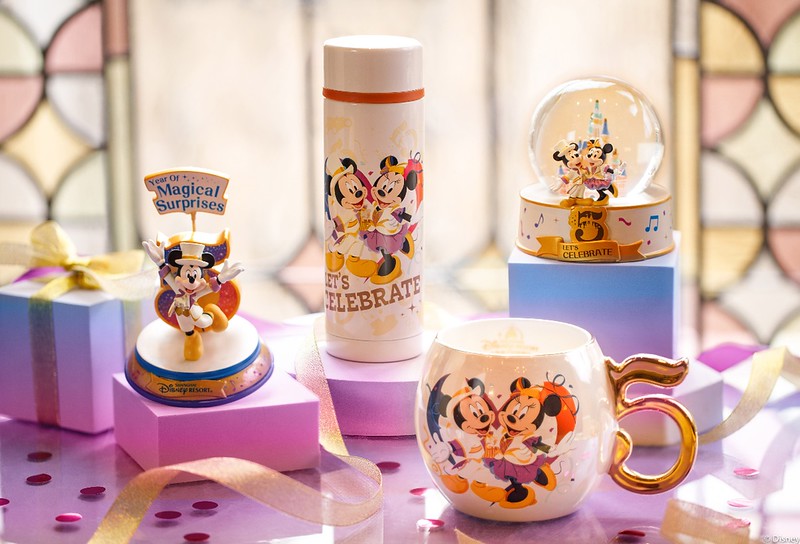 A 5th Birthday only rolls around once in a lifetime, and as part of the resort’s year-long celebrations, guests will be able to immortalize their trip to Shanghai Disney Resort by taking home a selection of over 200 amazing 5th Birthday souvenirs, including a range of exciting limited-edition items. 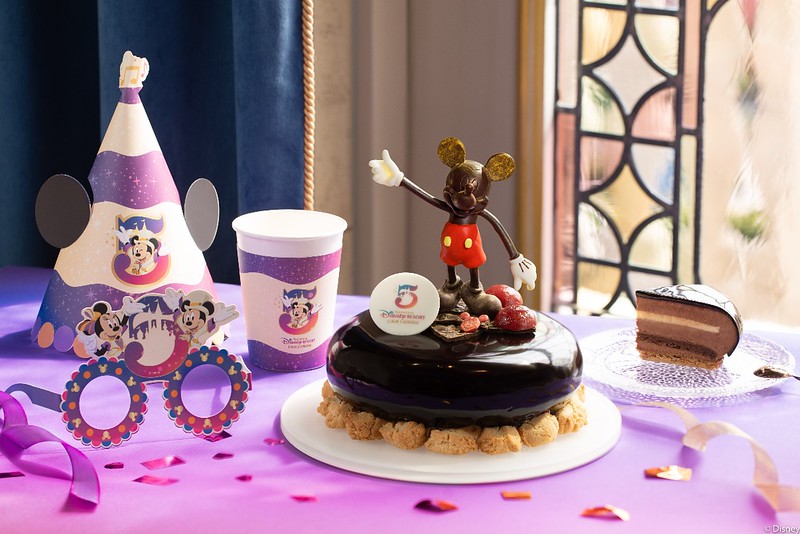 With the resort’s restaurants filled to bursting with delicious snacks, treats, meals and delicacies, guests are spoilt for choice during the 5th Birthday Celebrations. From Asian cuisine and Western fare, to seasonal specialties, and a spectacular selection of ice cream, so many delicious options await to help keep guests happy and full of energy during every moment of their celebrations!

Enchanting decorations will illuminate the beautiful themed lands of Shanghai Disneyland, while 5th Birthday decorations will line the streets of Mickey Avenue. The resort’s two hotels and Disneytown will also be receiving a memorable magical makeover!

Shanghai Disney Resort Cast Members will also be joining in on the celebration with a brand-new 5th Birthday nametag featuring a glittering array of golden stars and the resort’s unique “5” logo. Cast across the resort are excited to participate in the celebration by sharing their joy as they demonstrate legendary Disney service by consistently going above and beyond to ensure a lifetime of magical memories accompanies each guest’s visit to this one-of-a-kind destination.

More surprises and details about Shanghai Disney Resort’s 5th Birthday Celebrations will be announced in the near future. Tickets and Annual Passes for entry to Shanghai Disneyland are available via the resort’s multiple official channels. 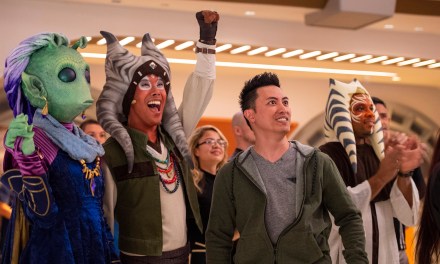 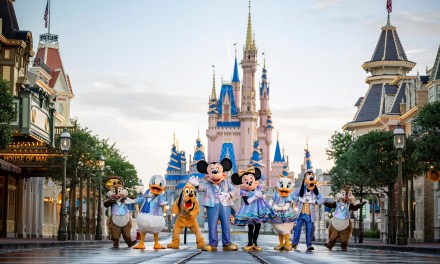