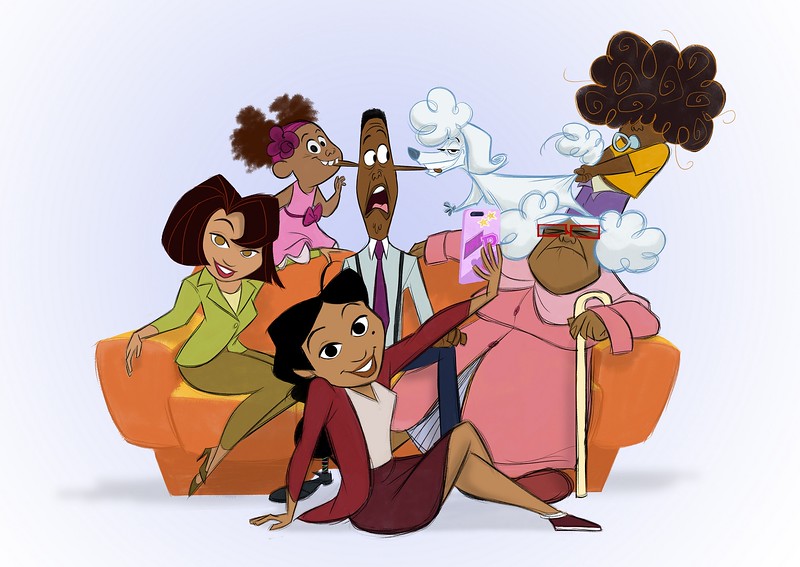 Disney+ is rekindling old favorites once more with the announcement today of THE PROUD FAMILY: LOUDER AND PROUDER. It’s been 18 years since its original Disney Channel premiere and the new series aims to continue its trademark stories and multilayered humor with messages of inclusion and cultural diversity in a smart, modern way.

As you can see from the concept art above, the show picks up just where it left off! The story will remain on the central character Penny Proud and also include her madcap family: parents Oscar and Trudy, twin siblings BeBe and CeCe, and her grandmother Suga Mama (and Puff!). Of course, it would not be “The Proud Family” without Penny’s loyal crew Dijonay Jones, LaCienega Boulevardez and Zoey Howzer, among others.

THE PROUD FAMILY: LOUDER AND PROUDER is currently in production at Disney Television Animation with Academy Award-winning creator/executive producer Bruce W. Smith and executive producer Ralph Farquhar, who led the original series, at the helm, reuniting them with Calvin Brown, Jr. who is co-executive producer and story editor.

Want to catch-up or re-acquaint yourself? All previous seasons of THE PROUD FAMILY are currently available on Disney+.

A debut date has not been announced for THE PROUD FAMILY: LOUDER AND PROUDER.

Disney+ streaming service is available now in the US, Canada, Australia, and a few other countries. A regular subscription is available for just $6.99 per month. Visit DisneyPlus.com to subscribe and/or learn more about the service.

Check out these new clips for PETE’S DRAGON