After chronicling the construction over the past year or so, we’re excited to finally take a look at the new Pixar Parks Parking Structure. Yes, we get excited about even parking structures around here. We suspect you do too or you wouldn’t be here!

The new Pixar Pals Parking Structure adds more than 6,500 new parking spaces to the overall Mickey and Friends complex helping to alleviate parking woes that have been hitting the happiest place on earth for the better part of a decade. Exact operations seem to be in flux as Disney works out kinks in getting guests efficiently in and out of the Resort. 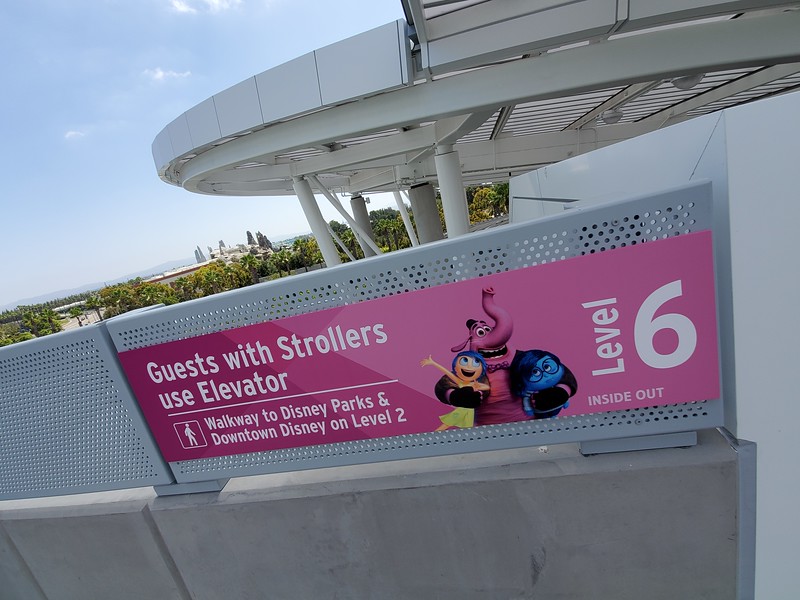 The far end of the structure has five elevator wells compared to the two over on the Mickey and Friends side.

Still working out kinks as a sign here was recently removed and seemingly replaced with a smaller one.

There’s no mistaking the elevators are for the Pixar Pals parking structure. 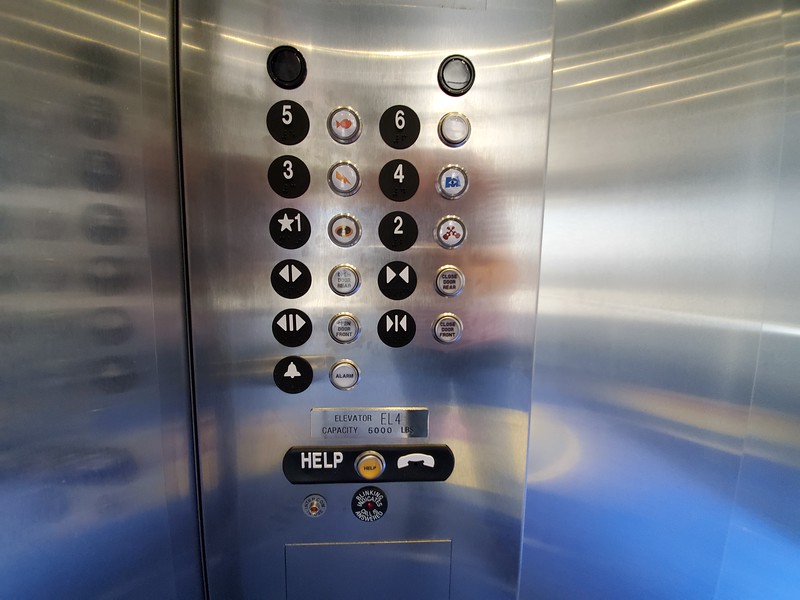 A walkway connects the Pixar Pals with Mickey and Friends. 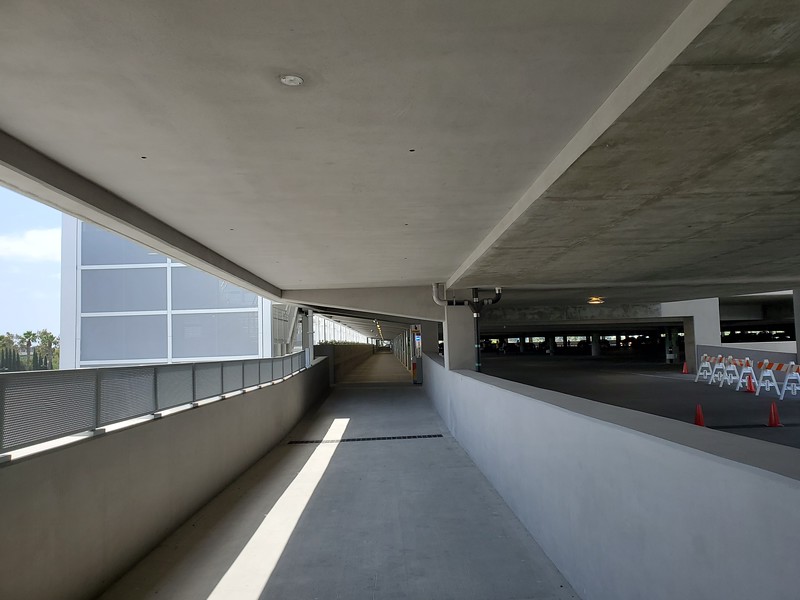 The new walkway on each level also shares a one-way drive way used for vehicular access. 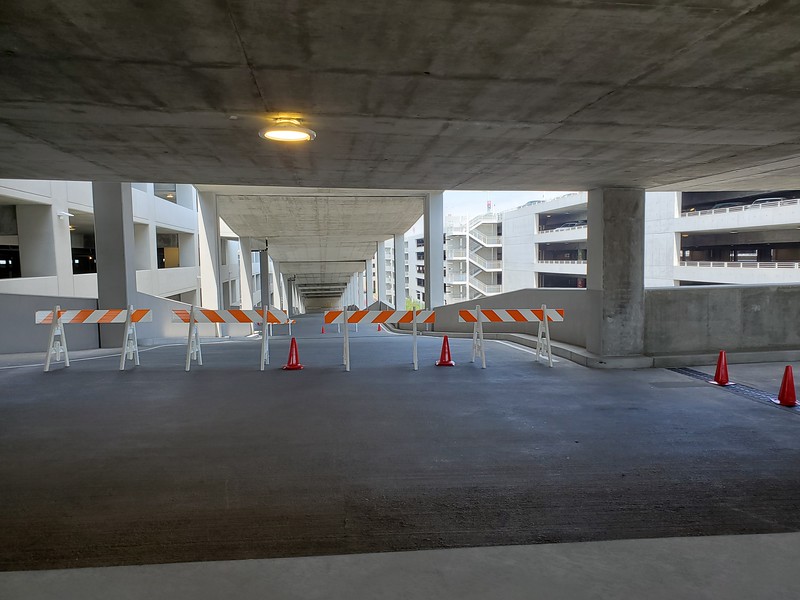 It’s unclear what the new ramps are going to be used for (up or down access.)

We all love a new trash can design. 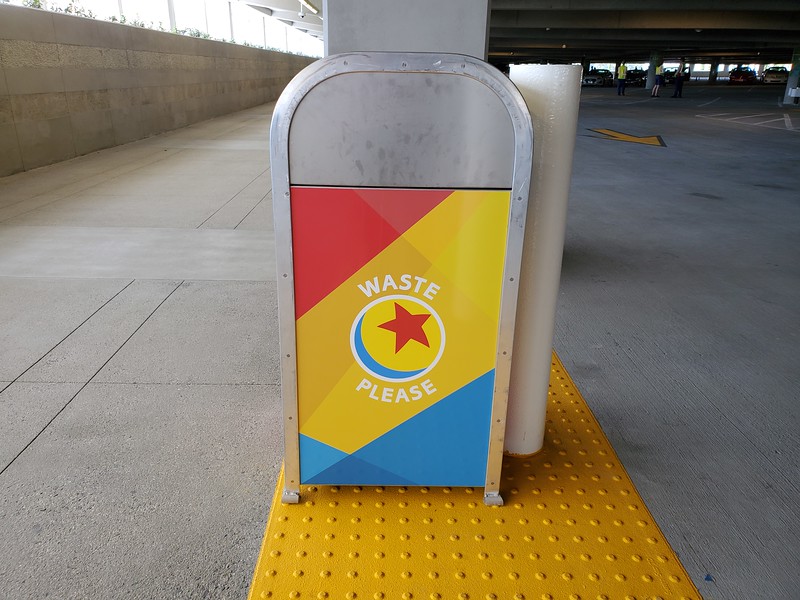 They might need to rethink the stainless steel look for the lids as it’s already proving after about a week that it’s not exactly “stainless.” 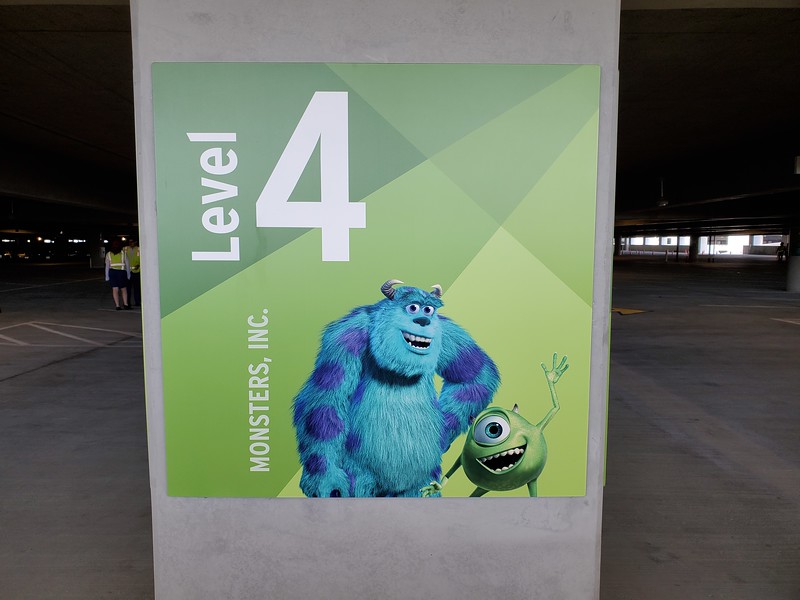 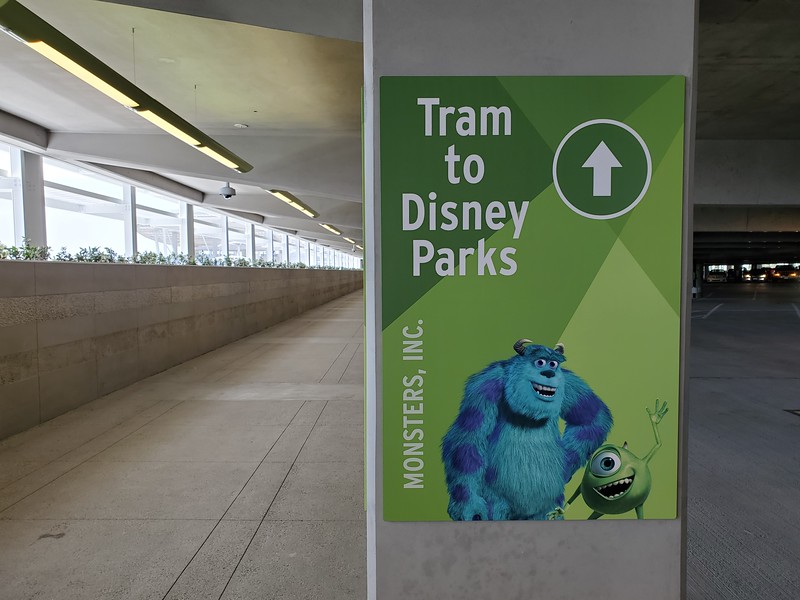 Signage is similar but decidedly more modern than next door at Mickey and Friends. 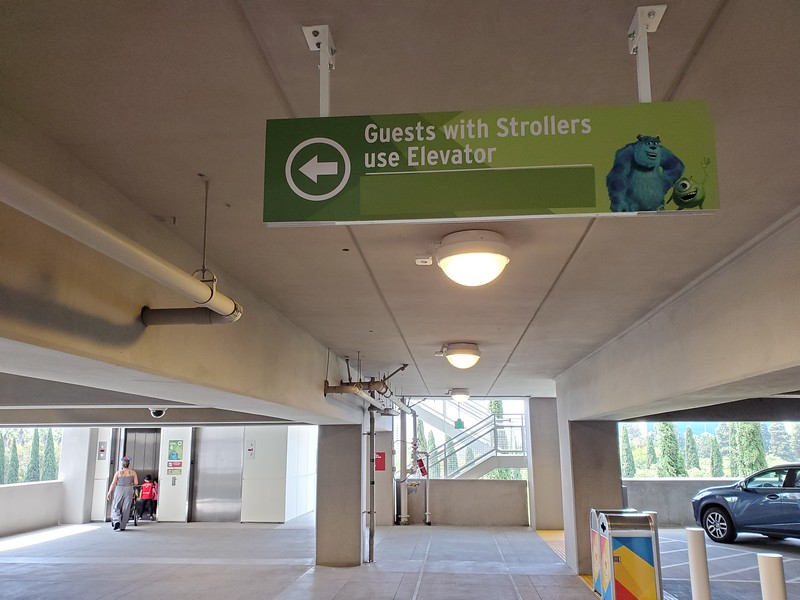 Several pieces of signage make reference to the walkway on Level 2 that doesn’t exist yet. You can see many — but not all — of the signs are currently covering up that directional language temporarily.

If you opt for an alfresco means of getting to ground level you can opt to use the escalators. 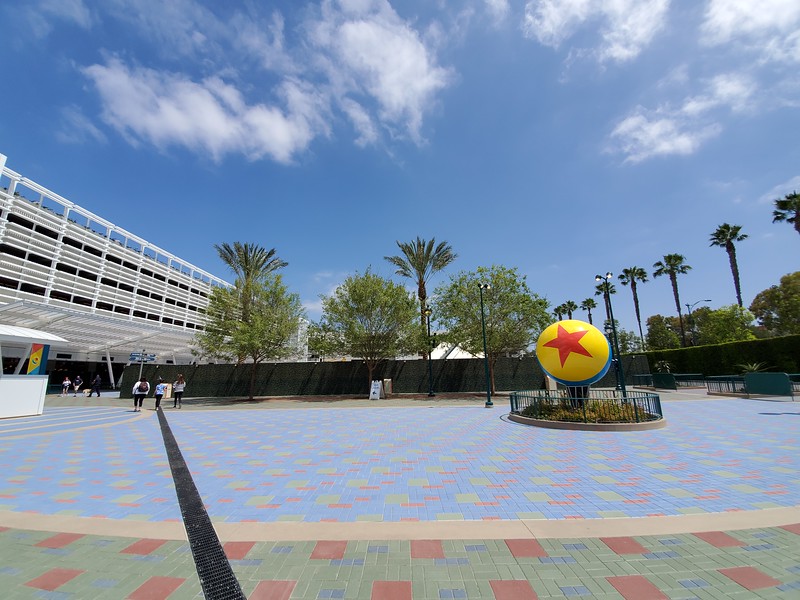 The temporary walkway to Downtown Disney.

Level 2 has a nice big area which should help accommodate extra crowds as people use this level to take the new bridge once it opens.

For now, access is blocked while construction speeds along. 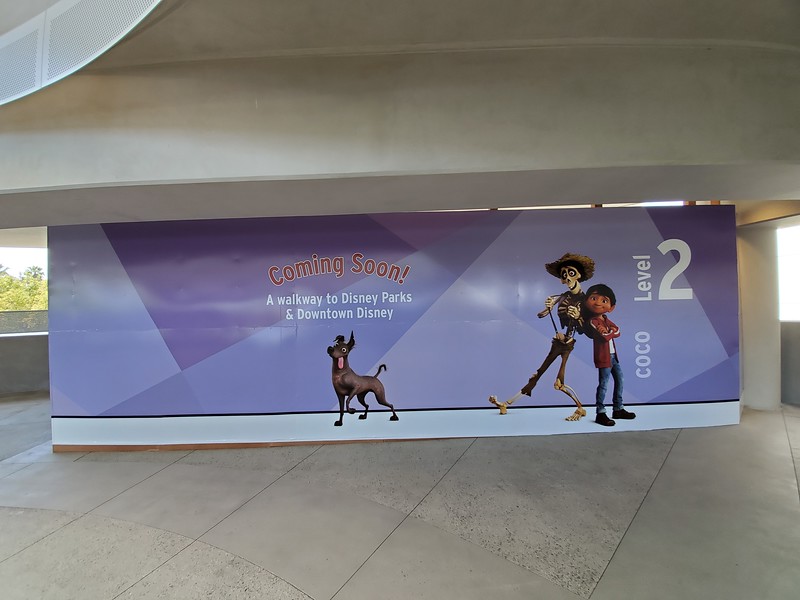 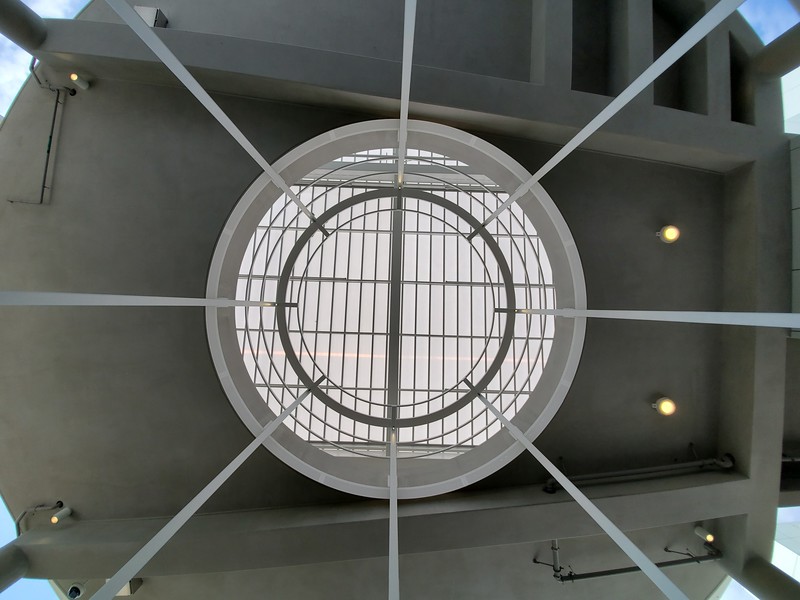 The new bridge seems mostly ready to go but there’s still a lot of work to actually connect the bridge with the ground. 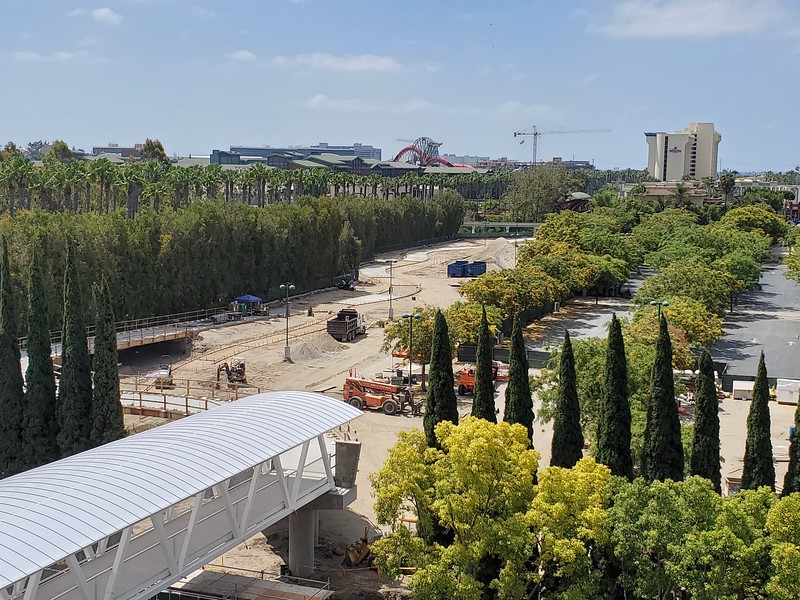 The bridge on the Downtown Disney side will not require an elevator as it will slope all the way back down to ground level at a wheelchair-friendly incline. 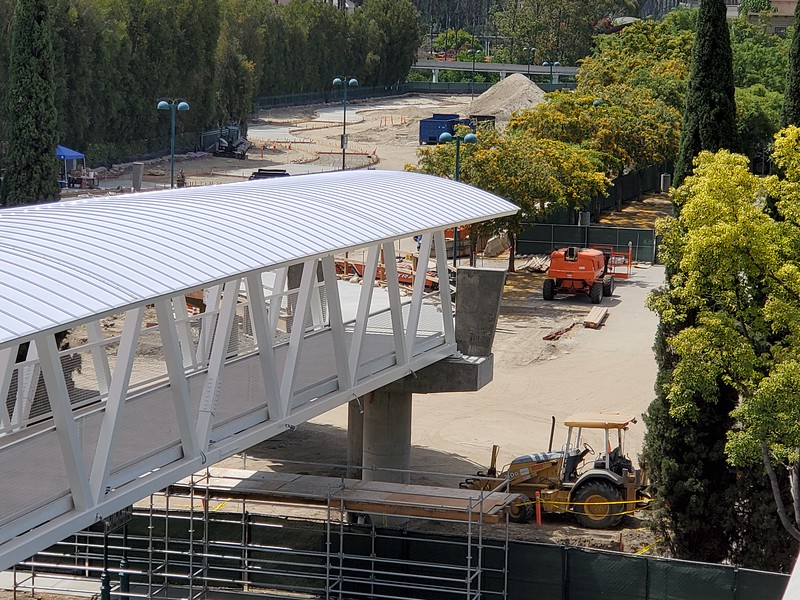 You can see the temporary walkway leading guests back to the intersection which then requires doubling back on the other side of the street. This minor inconvenience seems like a small headache for the Resort as on several different occasions we have seen people jaywalk to avoid having to go down to the intersection.

Meanwhile, there’s still plenty of work to be done in-between Pixar Pals and Mickey and Friends to complete the new tree-lined plaza that will bridge the two structures. One of the unload zones here has been completed and is in use but the other is still but piles of dirt for now.

The new loading zone opened a few days before the actual structure. We chronicled that in a previous update but here’s another look.

Signage helps direct guests in this inbetween state when parts of Pixar Pals is not yet available.

Prepare bags for inspection. Remove items from pockets. Thank you!

If you elect to skip the trams you can continue walking past the new escalators and head towards Magic Way to get to Downtown Disney.

Once you get through security screening you can head towards one of two loading station.

Individual queues now delineate each row on the tram.

TRAM TO THE PARKS…

TRAM BACK TO THE STRUCTURE…

The former loading areas are now used exclusively for unloading.

Signage helps try to remind you which side of the structure you’re parked.

So cute! Would be awesome if this was Nemo instead since its Pixar Pals side. This could go on the Mickey and Friends side. 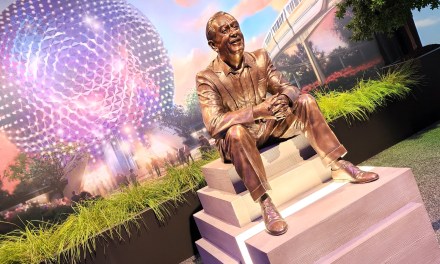