Disney/Pixar newcomer Ally Maki (Wrecked) makes a memorable impression in the long-awaited TOY STORY 4 as the tiny Giggle McDimples, a no-nonsense LEO whose loyalty to Bo Peep makes her the shepherd’s perfect confidant.

We got the chance to sit down with Ally to talk about her whirlwind journey to cartoon stardom. Ally has the presence of a star, and by the end of our talk, the entire room was ready to follow her into battle! She’s bubbly in a genuine and disarming way, and within a few seconds it was obvious why she was the only choice for the casting and creative team at Pixar.

At one point, Ally took a toy of her character and asked it her if it was excited about TOY STORY 4. The results were kind of amazing:

We got to spend a little time with @allymaki (Giggle McDimples in #ToyStory4) and after our interview she had some trouble getting her own doll to stop shading the movie. pic.twitter.com/CTpGdcdrKM

The first session I walked in and was like, do I need to make my voice higher or lower? They wanted me, my voice. When Pixar does their movies they want to hear the authentic voice of the character. I was able to be who I am, and bring my first instincts to the character. This is the only job in my life where they’re like go to a 10 and then, that was great, but now take it to a 12! On camera work is “be more grounded, be less, be smaller”, and in real life it’s “be smaller, don’t make too much noise,” and with this it was be 100%, be 150%. It was very awesome and very freeing.

What is the casting process like? Tell me what blind casting means.

Pixar’s casting team uses YouTube as a resource because they’re trying to find fresh talent out there. They came across this one video I had done years ago that had gotten no views, and that’s how I got on their radar! I tell everyone to make your own content, and keep making it! The thing about me is that they found one video and they loved it, but below they found 20 more videos so they could get a full picture of who I was. The most important thing to do is to create a big body of work around who you are and your specific voice. Jonas [Rivera], [Josh] Cooley, Mark [Nielsen] and the gang listened to the sound bites from the blind casting, and they told me that they heard it and were like, “stop, who’s that!”, and that was it!

We heard you got engaged recently, congratulations!

He did it after the premiere. We had just left the after-party, and I had gone back to change my shoes to go to the secret Pixar after-after-party, so there was this weird pocket in-between parties. We walked into the hotel room and there were rose petals and I was like wow, the Roosevelt is really treating us nice! (laughter) They’re so weirdly romantic! The concierge was killing it today! He started crying, our friend was there with a camera. Josh Cooley and his wife knew about it, and asked immediately – did you do it? It was the ultimate surprise party!

Have you gotten to spend time with any of the other actors in the movie?

Annie Potts (Bo Peep) is such a darling human. She’s so kind and so fierce. [Tom] Hanks was the one person I got to meet in the process, but unexpectedly. I went to a session where we were doing some early interviews, and they said we’ll do hair and makeup when you get here. So I was running late, and I showed up in a crazy messy bun, no make up, a big oversized jacket, looking like a gremlin, a giant stress pimple on the side of my mouth. I get there and they’re like great, Tom’s here so he’ll be down in a few minutes. And I was like Tom? I’ve been in this process for three years and there’s no one named Tom on the team. So I said “Tom…?” and they said “Hanks.” He’s here right now? Let me get to hair and makeup…and then I heard his footsteps. So of course I would meet him looking gremlin-like with my giant pimple, but it was kind of perfect as it felt like my 14 year old awkward self was meeting my idol. He’s so great.

Diversity in Hollywood is a hot topic. What’s your feeling on the future?

It’s looking bright! I moved out here when I was 14, so I’ve been able to see the arc of where we’re started and where we’re headed and it’s so beautiful to see all of these different representations of people in general. More strong female characters, more strong female women of color characters – it means so much to me. If I had a character like Giggle when I was 12 or 13 years old, how much further along I would be in finding my own identity, self-worth and confidence? I’ve learned so much through this process. I see these young girls already finding these versions of themselves, their power, and their voice, and I just imagine when they grow up what amazing role models they will be and how they’ll use their voice to change the world.

How many times do you think you had to giggle in any given session?

Let me tell you about what’s called the “voke sheet”. it’s a list of hundreds of things, it says sigh, laugh, ,small laugh, big laugh, chuckle, slight chuckle, annoyed laugh, effort (makes noise), gag, sigh, shock. Honestly I had so much fun doing the voke sheet. When do you ever get to be that crazy and do that many emotions in two minutes? It’s a good mental exhaustion, therapeutic in a way. 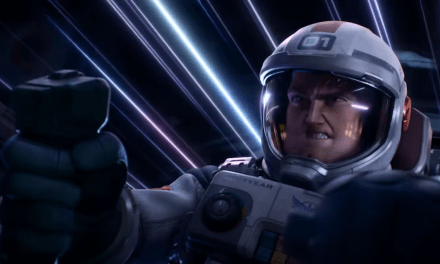