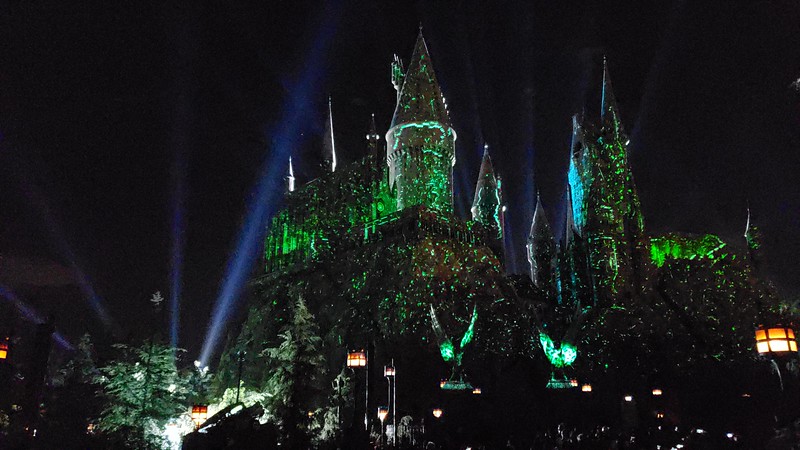 It’s certainly surprising but the darkest elements of the Harry Potter universe have shone a bright new light on the Wizarding World at Universal Studios Hollywood thanks to the new show, DARK ARTS AT HOGWARTS CASTLE.

Featuring an exclusive new musical arrangement conducted William Ross and recorded by the London Symphony Orchestra in London, the show utilizes projection mapping and a host of new special effects to deliver a truly impressive addition to the line up of show moments.

Honestly, don’t assume just because you’ve seen the original version of the show (HERE) or its Christmas counterpart (HERE) that you’ve seen all there is to see with this show format. Universal has done a great job of enhancing the offering to keep it fresh and interesting!

I was pleasantly surprised! The Dark Arts were never a particularly favorite element of the Harry Potter franchise so it seemed odd to limit a show to such a specific aspect of the available material. But it actually all comes together for a great combination of effects that create a compelling new vistas on the castle; from spiders to the mountain trolls to the Dementors and Death Eaters and beyond!

Everything combines together as a thoroughly impressive set of visuals that brings the familiar facade to life in all-new ways including its ultimate destruction by Lord Voldemort, himself! 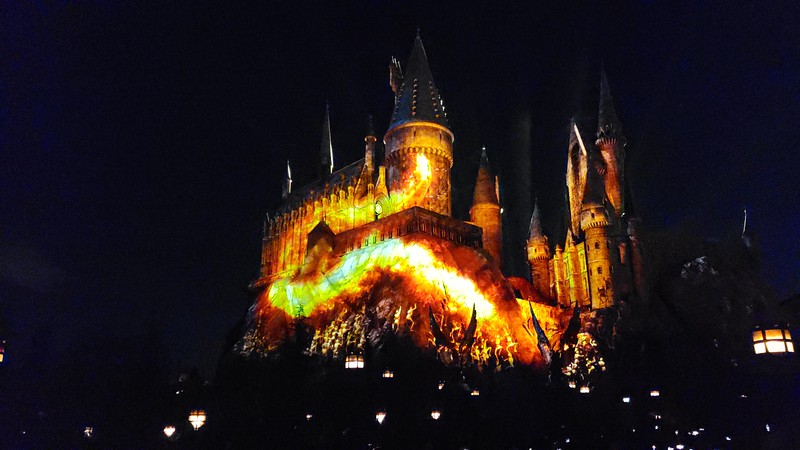 The show takes advantage of several new special effects including fog in the forest and queue plus new fire effects lining the front perimeter. There’s also glowing orbs which we’ve seen during the holidays shining bright here in vibrant blue. It all culminates into an honestly stunning presentation.

You might have noticed I said nothing of the the drones (a highly buzzed about element for this show) and that’s because for the premiere event, wind levels forced the grounding of that special effect so we didn’t get to see it in action. Haven’t had the chance to see it in person but It looks absolutely incredible!

Universal Studios asked us not to publish full video of the show. In respect of that request, we have instead offered three clips which we shared to our Instagram.

Watch these highlight clips from the brand new #DarkArtsAtHogwartsCastle at #WizardingWorldHollywood! Only from from April 13 – 28, 2019 then again from May 25 – 27, 2019. WATCH:

For fans who wanted a first look at the new show, Universal held a separate-cost event that included the following:

All three forms of Butterbeer were available for the drinking. Pick your poison: cold, iced, and hot! 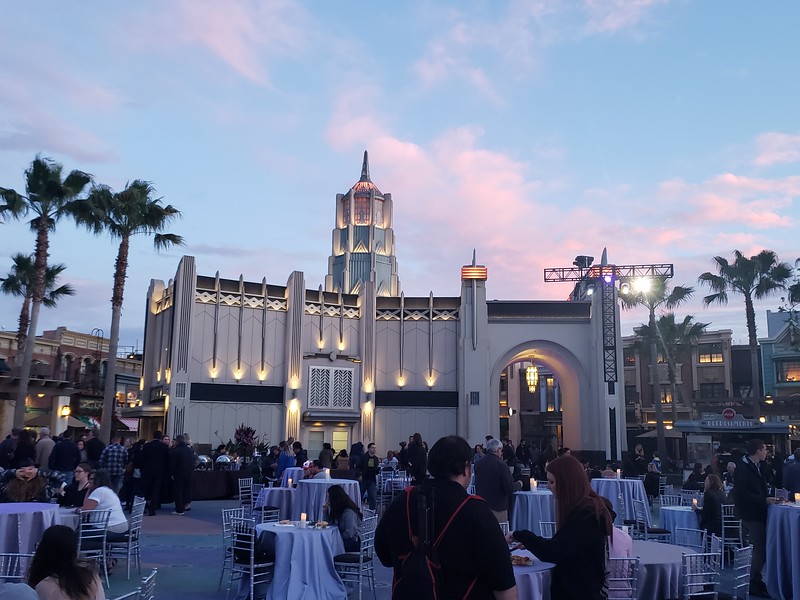 With the light crowds for the event, we were able to get a private audience with the Wand Keeper at Olivander’s!

Unlimited access to both attractions in the land. A literal walk-on for most of the evening! 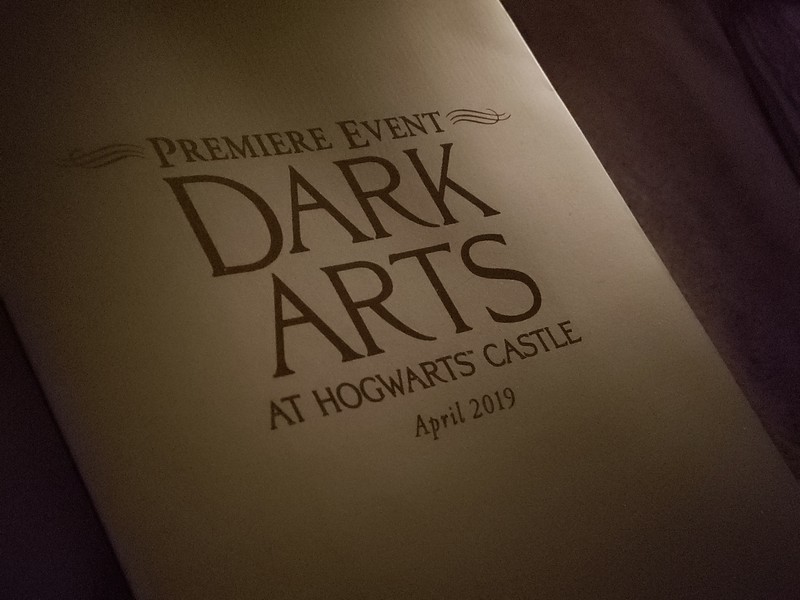 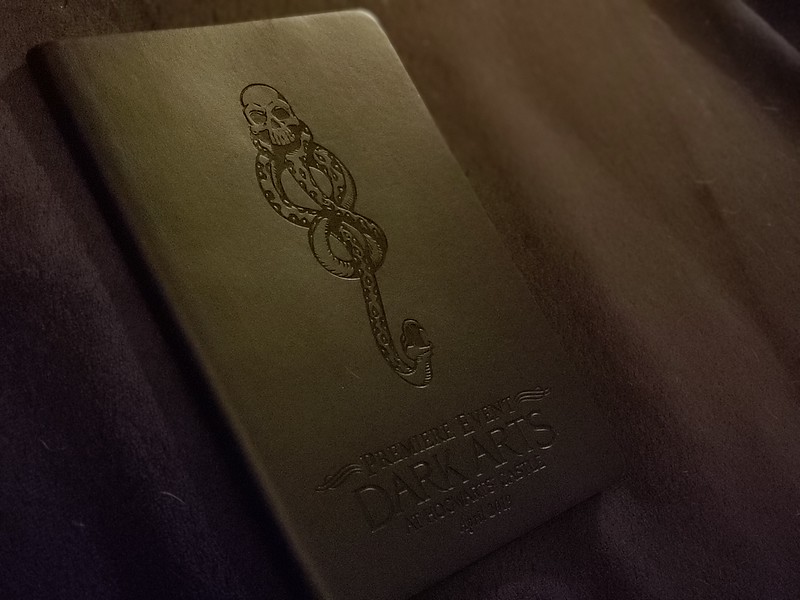 The souvenir gift at the end of the night was a commemorative notebook featuring the Dark Mark and a poster featuring the same artwork as the official lanyard (shown below.)

“Dark Arts at Hogwarts Castle” will illuminate Hogwarts castle and “The Wizarding World of Harry Potter” nightly at Universal Studios Hollywood from April 13 – 28, 2019 then again from May 25 – 27, 2019.

Universal Orlando Resort’s experience will debut later this year with dates to be announced at a later time. 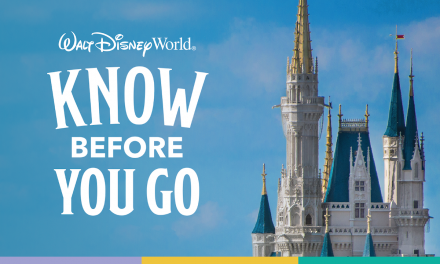