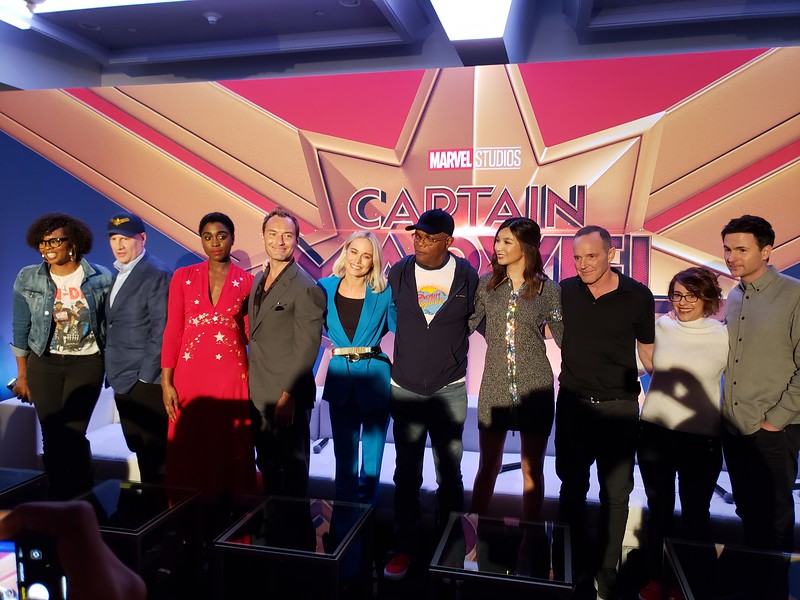 CAPTAIN MARVEL is hitting theaters tomorrow but we’re giving you the chance to go a little higher, further, and faster with a look back a few weeks ago to the LA press conference.

Brie Larson emanates confidence and power so it’s no surprise that she was attracted to the role of Carol Danvers and her super hero alter ego Captain Marvel. “There’s a lot to love… I was a little worried about playing [a superhero] that would be perfect — because I don’t feel like that’s realistic… so getting to play a character where the whole character arc and turn of this is watching her be this major risk taker… those are [the] defining moments of her character, where she doesn’t lay down, she gets back up.”

Nick Fury (Samuel L. Jackson) has two eyes in this film and he’s not the hardened battle-worn director of S.H.I.E.L.D. Instead, he’s a softer and decidedly younger agent. On going younger he mused about the wig and the motion-capture dots on his face that would be used to re-generate his face in CG so that they could superimpose it right back over his actual face. A digital mask of his own — de-aged — face. Musing about the process, Samuel L. Jackson said “they put dots on my face so it kind of felt like I was in Wakanda.” Wrong movie! But now I want nothing else than to see Fury visit Wakanda.

Clark Gregg (Clark Gregg) is also back and like Nick Fury has been de-aged. It’s especially great to see this fan-favorite on screen in a sort of buddy-detective setup with Fury. On coming back to the Marvel Cinematic Universe, Gregg was promised the kickback to the 90s; “cool soundtrack… they’re going to give you more hair and make you look younger. Oh, and Brie Larson is going to be Captain Marvel.”

One thing that the ’90s timeframe for the movie really got Clark Gregg nostalgic for was a time when MTV still played music videos. What a novel concept. Music Television showcasing music. Kid’s don’t even know.

The biggest diva on set? There was no hesitation from everyone on the panel, it was the film’s feline star: GOOSE. The orange tabby cat (portrayed by four different cats) was by far the most demanding presence on the set and despite the hilarious chemistry between Fury and the furry costar, Samuel L. Jackson admitted that he’s not a cat person. “No, I am not a cat person. But I’m also not a dog, bird or a fish person, either.” Brie Larson found herself in a bit of hot water with her four-legged colleague being chastised on set for being too loud and distracting while Reggie was filming one of his scenes.

Lahsawna Lynch took personal pride in being able to realize a super hero in her own right with her character. An every day super hero that so often gets overlooked: a single working mom. For her it’s about bringing an “appreciation for single mothers… who don’t get enough light shine on them ever… We’re actually enough. And so that’s what I’ve taken away.” Such a great message and revlation for her to discover on a film so ripe with female empowerment and shifting power dynamics.

Ready to go higher, further, faster at the press conference for #CaptainMarvel pic.twitter.com/hWuGI2ulug