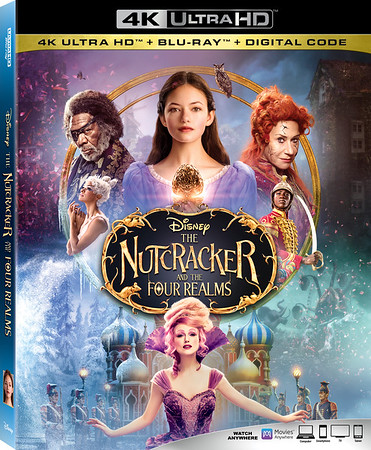 THE NUTCRACKER AND THE FOUR REALMS have found their way to the home market and ready to dazzle your home screens the way it did the big screen this past winter.

Despite a disappointing box office, I still think this will be a movie that could have long-term longevity. The beauty of the world created is unquestionable and although the story tended to meander through the woods — both literally and figuratively — the end result was still a film that was beautiful to watch.

It’s no surprise that the extra features for this film tend towards the leaner side despite the fact that there is clearly a lot to talk about with a film of this massive scale and history. Still what we do get is a nice dive into a feature film that will surely make the rounds from year to year on screens during the holidays.

Unwrapped: The Visual Effects of “The Nutcracker and the Four Realms” is a fun digital exclusive that explores the literal layers in making the film. You’ve likely seen this type of footage before in a behind-the-scenes segment on a TV show, it’s a fun peelback of the various layers of CG around actors to construct the final result seen on screen.

I LOVE these types of features, they evoke childhood wonder about how movies are made and still make me giddy to this day. Did you know there’s portions of the movie where the entire bottom of Clara’s dress are completely CG? Yep, you’ll see her running around in the forest in black leggings that would eventually be covered up by a fake dress!

Disney was clearly proud and excited to have renowned dancer Misty Copeland on board for the film (and certainly with reason) even though her role in the film is quite minuscule. That’s where we dive into On Pointe: A Conversation with Misty Copeland; a short featurette looking into the gorgeous work she did in the film and in the end credits with Sergei Polunin.

Unfortunately, the last bit of extras created for this release is a 7 minute piece looking into the making of the film. Unwrapping “The Nutcracker and the Four Realms” is a rather quick unboxing of a huge movie. There’s a lot to cover and the compact piece from the notable sets and costumes that made such a unique and memorable production.

Deleted Scenes are a pre-requisite, especially for a movie of this scale where it’s likely that things inevitably get left on the cutting room floor. For this release we have FIVE total scenes. Here’s the recaps per Disney:

Music Videos are always a sort of mandatory feature and are always barely worth a mention but with so few to review here we actually get TWO. First, the beautiful “The Nutcracker Suite” performed by Lang Lang features dancing by Misty Copeland and Sergei Polunin along with images from the movie. There’s also “Fall on Me” performed by Andrea Bocelli featuring Matteo Bocelli.

THE NUTCRACKER AND THE FOUR REALMS is available now on Digital and Movies Anywhere, and on 4K Ultra HD, Blu-ray™ and DVD.