“The gift of your faults,” an ambiguous blessing from guardian of the universe Mrs. Whatsit in Disney’s new film, A WRINKLE IN TIME, signals its final act. I expect many critics will find faults in Disney’s new adaptation of the classic novel, but that’s only because many critics are joyless. This film is dependent on joy. Joy in the good times, joy in the bad, the unbearable joy and unshakable agony of being a pre-teen. It interrupts Disney’s packed schedule of animated-to-live-action remakes, super hero epics, and galactic stories to bring unprecedented girl power to the big screen.

Like last month’s BLACK PANTHER, WRINKLE feels culturally seminal. It’s a landmark achievement for effervescent director Ava DuVernay (Selma, 13th), who has crafted a gorgeous, moving film from a script by Jennifer Lee (Frozen). The film is a constantly shifting kaleidoscope where tone is effortless. It never preaches, it never yells, and thanks to deft performances from the entire cast, it grabs the heart and never lets go.

Oprah Winfrey (The Color Purple), Reese Witherspoon (Big Little Lies) and Mindy Kaling (The Office) fill the angel-like roles of Mrs. Which, Mrs. Whatsit and Mrs. Who, respectively. The moment Witherspoon appears on screen, magic begins. She, Winfrey and Kaling are instantly iconic in Paco Delgado‘s (Les Misérables) breathtaking costumes, which transform in each scene. Winfrey is in her element as the godlike Mrs. Which. Witherspoon can barely catch her breath as the flighty Mrs. Whatsit. Kaling is resplendent and sparkling as the language-challenged Mrs. Who.

DuVernay introduced the film at our screening, noting that she made the film with 8-12 year olds in mind, as well as anyone who has ever been 8-12 years old. The film captures the uncertainty, hopefulness, and hopelessness of that age, in no small part thanks to the performance of Storm Reid (12 Years A Slave) in the central role of Meg. Reid carries the whole film on her shoulders, providing an intense emotional core to a story that is so fantastical it could easily slip into coldness. An equally grounded performance from Gugu Mbatha-Raw (Beauty and the Beast) as Meg’s mother brings raw humanity to the earthbound scenes. Even Rowan Blanchard (Girl Meets World) makes a meaningful impression as mean girl Veronica.

Women run the world here, and rightly so. The men in supporting roles demonstrate the opposite of toxic masculinity – the willingness to let a woman lead. Australian teen Levi Miller (Pan) is the best example as Calvin, who trusts Meg implicitly. Much will be made of breakout newcomer Deric McCabe, who is hilarious and charming as precocious little brother Charles Wallace. Chris Pine (Star Trek) plays missing physicist, Dr. Murry, and Zac Galifiankis (The Hangover) is memorable and moving as The Happy Medium.

Everyone at Walt Disney Studios should be proud of this film, and I suspect its impact on its intended audience will be immeasurable. Don’t listen to those whom the darkness has already swayed – see A WRINKLE IN TIME on the big screen, and bring some Kleenex. 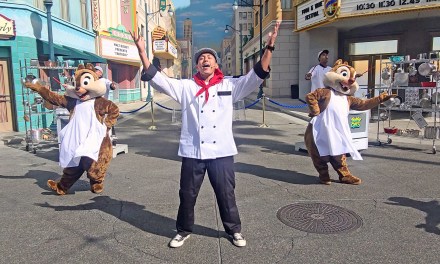