Bob Iger, CEO of the Walt Disney Company, and French President Emmanuel Macron made waves on February 27 when they jointly announced a €2 billion expansion of the second gate at Disneyland Resort Paris, Walt Disney Studios Park. At more than triple the cost of the park’s original build, this represents the first major investment in the Paris resort since the Studios’ opening in 2002.

The expansion will add three major new lands to the park based on MARVEL, STAR WARS and FROZEN, as well as the park’s first water feature in the form of an enormous lake, an expanded parade route, and a clone of the new Alien Swirling Saucers attraction from Walt Disney World‘s forthcoming Toy Story Land.

There’s a lot of detail hidden in this concept art (click on it to view it at full resolution), and while Disney has been mum about specifics since the announcement, we’ve done some digging to come up with our best guesses about the what, when and how for this landmark expansion. But first, a little bit of history on this park will shed some light on how we got to this massive expansion.

How did we get here?

DISNEYLAND RESORT PARIS has a troubled financial history. Despite having high attendance (it’s the most popular tourist destination in all Europe) since its opening in 1992, an overbuild of massive hotels caused debts the resort has never been able to overcome. Originally majority owned by a French publicly held company, Euro Disney SCA, the Walt Disney Company completed a full buyout in 2017, making it the only foreign Disney resort owned by the company.

The first plans for the resort’s second gate were on a much larger scale. Disney-MGM Studios Europe was meant to take the best elements of the park at Walt Disney World and add onto them to make a worthy companion for the grandiose Disneyland Paris park next door. Financial troubles put the park plans on hold, and by the late 90s, a barebones park that barely resembled anything Disney had ever previously built began construction.

The park opened in 2002 with a resounding thud. A charmless concrete jungle of beige soundstages, cheap flat facades and attractions that excited no one, Walt Disney Studios Paris made the then-new Disney California Adventure park look like the pinnacle of modern theme park design. Quick fixes were needed, but none could be budgeted. It wasn’t until 2007 that a collection of small rides lightly themed to movies like Cars and Finding Nemo opened, alongside a clone of California’s budget-conscious Twilight Zone Tower of Terror. 2010 brought the unceremonious arrival of Toy Story Playland, a sad place of conflicting scales and off-the-shelf flat rides that by the end of 2018 will have infected three other Disney resorts worldwide.

In 2014 the park made real progress with its first signature attraction, Ratatouille: The Adventure, a trackless dark ride combining larger-than-life sets and projection domes. For the first time resort guests would go out of their way to visit the park, although attendance has remained dismal in comparison to other second gate Disney parks worldwide.

When Disney announced a total redo of Disney California Adventure in 2007, Disneyland fans were relieved to see the company admit their mistakes and take expensive strides to fix them. Disneyland Paris fans have had to wait over 15 years for Disney to admit that the Studios park doesn’t work and needs serious help.

So will all these expensive additions help? Read over what’s coming below, and you be the judge! 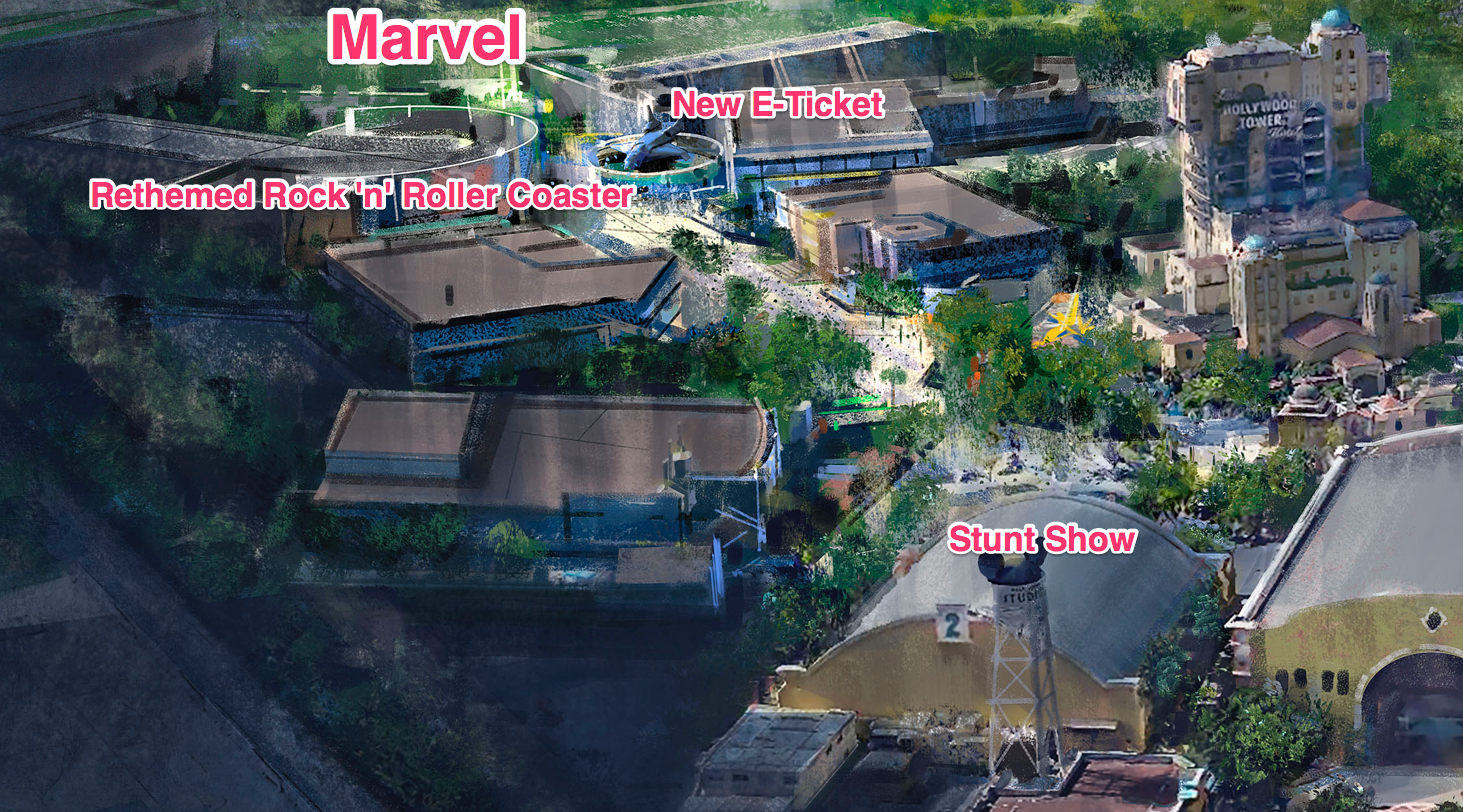 The first area to open will be themed to Marvel films, and takes over an existing portion of the park. Currently a drab sea of concrete and ugly facades, the Backlot and Production Courtyard areas will give way to a sleek, modern Marvelscape that will be home to at least two major attractions. Cinémagique, an opening day exclusive attraction that depicted Martin Short cavorting through the history of film, has already closed to make way for a new Marvel stunt show opening this summer.

Rock ‘n’ Roller Coaster Starring Aerosmith, a slightly retooled version of the same ride at Walt Disney World, will close soon to be rethemed to Iron Man and the Avengers. The coaster layout will remain the same, but the queue, story and show scenes will be completely transformed.

A new E-ticket attraction centering around the Avengers is expected to open here as well, and it could potentially be the same as the mystery Avengers E-ticket coming to Hong Kong Disneyland in 2023. This appears to be taking over the current home of the Moteurs…Action! Stunt Show, nearly identical to the now-closed show at Walt Disney World.

No word on what fate will befall another opening day attraction, Armageddon: Les Effets Speciaux, a bizarre special effects presentation reminiscent of the old Backdraft attraction at Universal Studios parks. It could be rethemed, or simply razed in favor of a new shop or restaurant. Stitch Live and Disney Junior Live will meet the same fate.

Preceding the new land will be the retheming of the resort’s Hotel New York. Gaining a subtitle, Hotel New York – The Art of Marvel will welcome its first guests in 2020.

The park’s Twilight Zone Tower of Terror, a copy of the 2004 DCA attraction, will remain as is and will not be rethemed to Guardians of the Galaxy.

Next up is an entire land devoted to Frozen, complete with castle, village and the North Mountain. The art here bears resemblance to a similar expansion already underway at Hong Kong Disneyland (opening there in 2021). Hong Kong’s Arendelle will include a newly designed version of Epcot‘s Frozen Ever After boat ride, as well as an iteration of the same ride system used in DCA’s Cars Land at Luigi’s Rollickin’ Roadsters, but with sleighs on “ice” instead.

It would stand to reason that Paris’ Arendelle will be similar, so there should be at least one E-ticket attraction, as well as a flat ride or two, meet-n-greets, shops and dining. A trackless dark ride was previously in development for Tokyo DisneySea, so it would be a nice surprise to see that large scale concept revisited here.

2023 will also bring the elliptical lake to the park at the end of a new boulevard leading from the park’s entrance. Expect World of Color-esque nighttime spectaculars to be performed on the lake, which will bring some much needed beauty to what has been since 2002 the starkest, coldest Disney park on the planet. The art also shows a new parade route encircling the lake, as well as water storage reaching behind Arendelle for show elements.

Capping off this round of expansions is a copy of the sure-to-be blockbuster lands already under construction at Disneyland and Walt Disney World. The concept art has lead to speculation that only one of the two attractions the domestic lands contain will make their way to Paris, but we’re inclined to think the entire land will be replicated as is. The art doesn’t preclude that possibility, and it would certainly help woo British guests who would otherwise spend their vacation dollars in Orlando.

The Paris resort is planning a new hotel as well, and a Star Wars concept similar to what is planned for Walt Disney World is under consideration.

We hope you enjoyed this closer look at the Walt Disney Studios Paris expansion. There could be changes down the line, as with Disney, nothing is for sure until it’s open to guests! Do these projects make you more likely to visit Disneyland Resort Paris? Let us know!