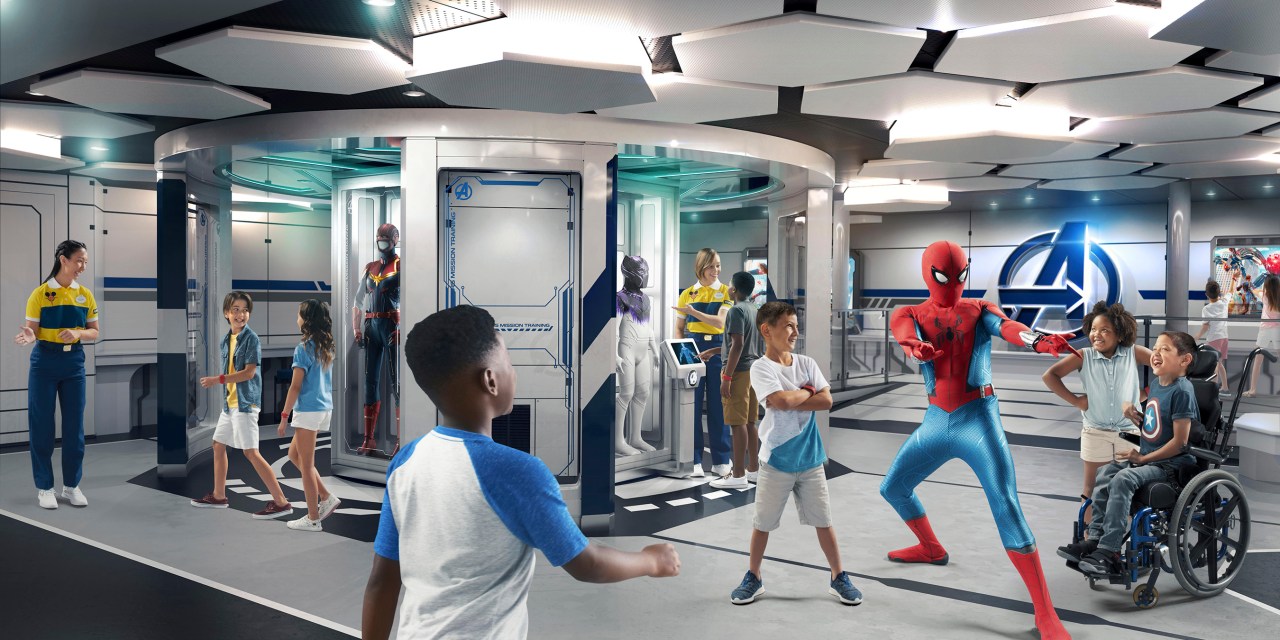 Disney Cruise Line today unleashed a flurry of announcements for its upcoming ship, the Disney Wish including details on all the fun activities meant to keep the little ones entertained. With an Imagineering Lab plus experiences from Marvel, Star Wars, Disney Princesses and beyond, it’s enough to even make adults a little bit jealous.

Children ages 3 to 12 will enter the captivating worlds of favorite Disney stories in the reimagined Disney’s Oceaneer Club, a real-life wonderland of immersive spaces specially designed to unlock their imaginations.

Aboard the Disney Wish, this club will feature more themed spaces than ever, each filled with endless entertainment – from storytelling, arts and crafts, and dress-up to toys, games and watching Disney movies. It will also offer more opportunities for kids to have fun with their favorite Disney friends during an exclusive line-up of interactive games and programs where characters don’t just stop by – they stay to play.

With the club located on deck 2, parents will be able to check in their children in the Grand Hall on deck 3 and then send them “down the rabbit hole” on a twisting slide that lands directly and securely into the central hub. Decorated with black-and-white sketches of Disney and Pixar characters, the hub will feature a stage and its own slate of special shows, activities and character appearances.

Walt Disney Imagineering Lab is a first-of-its-kind opportunity for kids to discover the secrets of world-renowned Disney Imagineers — the creative masterminds behind Disney theme parks, resorts and cruise ships — with hands-on activities and inventive experiments. Sorcerer Mickey, the ambassador of Walt Disney Imagineering, may even stop by to lend a wand to the newly minted magic makers.

One of the most exciting things Imagineers get to do is design roller coasters. At the Ride Studio, kids will create a coaster along the lines of Big Thunder Mountain Railroad, Space Mountain or Matterhorn Bobsleds – and then climb into a capsule where they will virtually ride their imaginative masterpiece.

More new spaces and experiences at Disney’s Oceaneer Club will be revealed at a later date.

Marvel Super Hero Academy is a high-tech Avengers headquarters where young “recruits” will train to be the next generation of Super Heroes with the help of their own real-life heroes, like Spider-Man, Black Panther, Ant-Man and the Wasp.

Kids will begin by choosing a super hero suit from a selection of power sets based on Marvel heroes like Iron Man and Captain Marvel, and watching their choices become nanotech forms around mannequins in real-time. Then it will be time for “Avengers: Mission Training,” a gesture-based technology game where they put their new suits and skills to the test as they virtually battle bad guys.

Fairytale Hall is a royal trio of activity rooms where kids will join some of their favorite Disney Princesses and Frozen Queens as they let their creativity shine at Rapunzel’s Art Studio, read and act out stories at Belle’s Library, and test newfound icy powers at Anna and Elsa’s Sommerhus.

Older kids ages 11 to 17 will chill and play in their own way aboard the Disney Wish, with trendy hangouts and counselor-led programming designed to engage the unique interests of tweens and teens. Featuring all-new looks that combine sophisticated design with youthful Disney touches, these clubs will offer customized fun and, for extra cool points, secret entry ways accessible only to the VIPs.

At Edge, tweens ages 11 to 14 will have fun, make friends and play games in a bright, colorful hangout inspired by a chic New York City loft. A faux-grass picnic area and graphic art displays called “photo walls” will provide ample opportunities for tweens to capture cool, shareable vacations pics that will be the envy of their friends back home.

Located on deck 5, the exclusive entrance to Edge will be hidden behind a framed piece of art that reimagines world-famous paintings in a pop art-inspired compilation of Disney characters, including Minnie as the ‘Girl with the Pearl Earring’ and Donald as Salvador Dali.

At Vibe, teens ages 14 to 17 will meet new friends, watch movies, play games and participate in entertaining activities created just for them. Inspired by a Parisian artists’ loft, this stylish space features classic architectural elements with an electric retro twist, with vibrant neon signs and funky pop art. Combine those with floor-to-ceiling windows overlooking the ocean, and every angle in Vibe will offer a selfie-worthy backdrop for the trendiest teens on the high seas.

For the littlest cruisers ages 6 months to 3 years, It’s a Small World Nursery will offer babysitting services in a whimsical environment inspired by the beloved Disney attraction of the same name. Here, little ones will play games, make crafts, watch movies, read books and even spend time with special Disney friends under the expert care of Disney-trained counselors.

In the nursery, toddlers will take a playful trip around the world in the company of Disney, Pixar and Marvel characters reimagined as “it’s a small world” dolls. Each section of the space is themed to different areas of the world, with characters grouped by their homelands.

In the play room, magical murals will feature interactive hand cranks that trigger delightful effects. Little ones will be able to spark a cascade of ice magic from Elsa’s hand, send Aladdin and Jasmine swaying on the magic carpet, uncover Flynn Rider as he clings to Rapunzel’s enchanted tresses, and more. A toy train will chug along the ceiling, filling the space with colorful lights, playful sounds and kinetic energy.

WHAT TO WATCH: Navigating the new original content on #DisneyPlus