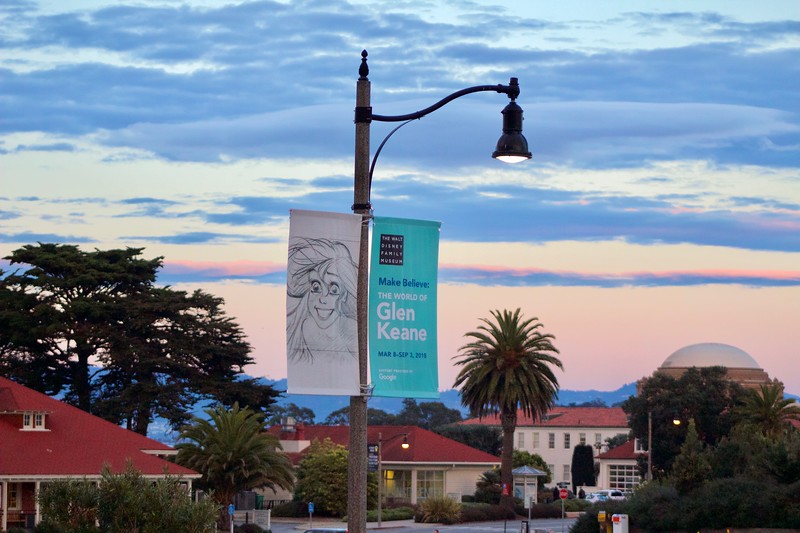 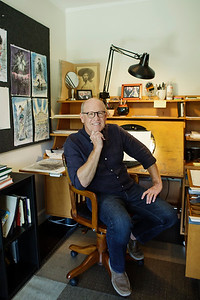 We had the chance to speak with Glen Keane which you’ll find below but before that, we’ll take a look at the awesome exhibit which covers an impressive career by an impressive artist. For the uninitiated, Glen Keane is a Disney Legend and responsible for many of the most well-loved characters in the Disney Animation film library including The Little Mermaid, Rapunzel, Beast, and Aladdin.

The exhibit encompasses the lower-floor of the Walt Disney Family Museum.  Once you descend the staircase you are fully engulfed in a wall-to-wall collage of drawings, and words of advice from Glen Keane and his mentors.  The sketches along the wall have “Post-Its” with Glen’s own words describing moments in many of our favorite Disney films and what inspired moments and characters down to even the most minute detail.

The second room houses original maquettes and sketches from Glen’s personal library. His work ranging from The Great Mouse Detective through the Disney Renaissance of The Little Mermaid, Beauty and the Beast, Aladdin and to his last work with Disney on Tangled are on full display and really show how much of a mark Glen Keane left in Disney Animation in his nearly 40 years of work at The Walt Disney Animation Studios.

The most touching item for me was the Post-It from Ollie Johnston (one of Walt Disney’s original “Nine Old Men”) to Glen on top of a proposed storybook introduction for a film about Rapunzel with the written words, “Glen, I hope you get to make this film.”  Knowing how long the future film Tangled was in production for, I’m glad that Glen was able to make his dream a reality and that he pays tribute to his friend and teacher while also inspiring future generations of animators. An Interview with Glen Keane

We were lucky enough to have a chance to speak with Glen Keane for an interview.

MI: Nice to meet you, Glen!

GLEN: You too, Sergio.

MI: I want to say congratulations on your Oscar for Dear Basketball!  How did that feel going up on stage and getting that award?

GLEN: I was amazed.  I was not expecting to win. To be there with Kobe [Bryant] was incredible.  We both poured our heart and soul into that. He really became vulnerable opening himself up as he wrote Dear Basketball, such a pure, beautiful expression of his love for the game. When he asked me to animate it he really asked me to do something that was very personal to me to draw it in a rough, expressive style. He asked me to be me. That was so wonderful to get a chance to do that. It’s part of my legacy at Disney is really through a lot of the characters that I’ve animated but you haven’t seen my original drawings. They’ve been cleaned up and painted. This was actually the real rough drawings there. For me, my animation never gets better than on the board when I’m drawing it.  It can then go into color and everything else but there’s some magic that happens on the drawing board. Dear Basketball was a way of taking that magic and keeping it as close to that creative moment and getting that up on the screen.

MI: On my way here I was listening to an old Bancroft Brothers Podcast episode that you were on and we’re here at The Walt Disney Family Museum and I feel as if you’re a big part of this Disney Legacy and you said “I don’t really feel like a Disney guy.”  Do you not want to put yourself on that type of pedestal or is it really just about the artwork for you?

GLEN: What I mean by when I say “I don’t feel myself a Disney guy” I never felt like that the characters I’m animating define everything about me.  It’s a place for me that I can pour my heart into and the characters I believe in them and they can come to life. I remember my dad when I was a little kid he said, “Glen, I’m a cartoonist. You’re an artist.” He set the bar really high for me. You need to always be growing.  To be an artist means something somebody else says to you. It’s like a knighting. There’s kind of like a package if you say, “That person is a Disney artist. There they are, they’re complete, that’s them.” I’ve never felt like I fit into that box.  Now that I’ve left Disney I realize I may leave Disney but Disney will never leave me.  It’s always a huge part of me because it was taught to me by Frank [Thomas], Ollie [Johnston] and Eric [Larson] and this idea of animating with sincerity.  That’s what Disney is.  I don’t know that that’s what everybody thinks about when they see me as a “Disney guy”.  I know there’s a lot of marketing and publicity and many other things that go along with Disney, but at the core, yeah I’m a Disney guy.

MI: We have some fan questions. There’s a lot of students that are pursuing the animation field. Do you have any piece of advice you’ve received or that you can pass on to future animators?

GLEN: My dad when I was little kid told me, “Draw what you know.” Ollie [Johnston] told me, “Don’t animate what the character is doing, animate what the character is thinking.” Mixing both of those ideas together it’s like you’ve got to be in the skin of the character that you’re animating. You need to understand them from the inside out.  My advice would be to animate from the inside out. It’s not about doing drawings that move; it’s about doing drawings that move an audience.  For Dear Basketball I told Kobe, “I can’t animate you doing this. I have to know what’s going on in your head.  It can’t be just from the outside. So we sat down and went through shot by shot by shot of what he was going through in order to animate that. Animating Ariel I wrote pages about her and what she thinks and how she feels and her history so I would know who that girl is. You never saw on the screen or anything but there’s a conviction about that girl. When she’s singing “Part of Your World” that’s all part of the history that I’m animating to. My advice would be live in the skin of the character that you’re animating and do whatever it takes to understand how they’re feeling, what they’re thinking and if you believe it the audience will.

GLEN: Probably Ariel is my favorite. Beast might be equally natural.  I mean I really related to him. I had a bad temper as a little kid. I really animated that, this child-like temper tantrum, this wild animal – I got that. I always understood something very volatile and strong and powerful. I just really got Beast.  Tarzan was really like that too, though. There was a grace and gentleness to him that could though turn into animal rage.  I guess I like characters that really have a lot going on inside of them. I would say animating a character that believes the impossible is possible, like Ariel.

MI: Do you have any hopes for the future of traditional or 3D animation?

GLEN: Personally I have some things that I want to do.  I realize that it’s hard to push anybody else any way.  You can only affect what you can do.  I’d love to see us bring more of a hand-drawn, organic feel into CG.  More of an intuitive, expressive approach to doing CG. I would love to figure a way to actually animate in virtual reality.  That would be really wonderful.

MI: I know you’re working in VR, do you have any other types of art mediums you like to work in for inspiration?

MI: Going a bit into the theme parks – what’s your favorite Disneyland snack?

GLEN: I’m thinking of those churros.

MI: They’re very popular, it seems they come out with new flavors every few weeks.

GLEN: I’d have to say the churros. For me, the cinnamon, you know?

MI: Going to the theme parks, if you had an unlimited budget to create an attraction or show with one of your characters what would you do?

GLEN: I would create a big, tall tower and put Rapunzel in it.  Kids would crawl up her hair. We’d figure out a way to get them up there, a little seat that they would be pulling on the hair, and you’d go in and Rapunzel would be there, but it would be very much an AI Rapunzel that would look a child in the eye and talk to them and it would be so true and so real and expressive that it would be a real experience with that animated character in her world. I would love to create something like that.

MI: Well thank you for your time, Glen. Congratulations on all your success.

GLEN: Thanks a lot. My pleasure.

Make Believe: The World of Glen Keane is available at The Walt Disney Family Museum now through September 3, 2018.