The evolution of the Tower of Terror into Guardians of the Galaxy – Mission: BREAKOUT! is well underway at Disney California Adventure and today Disney/Marvel have offered the first official look at the work that will be transforming the attraction’s facade.

Featuring characters from the blockbuster films, Guardians of the Galaxy – Mission: BREAKOUT! is an epic new adventure combining the familiar, breathtaking free-fall sensation with all-new visual and audio effects, including music inspired by the popular Guardians of the Galaxy film soundtrack.The attraction will feature a variety of randomized ride experiences, so you never know which exact adventure you will get! 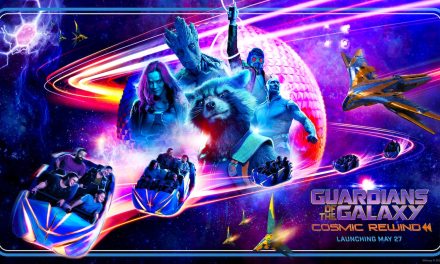