Although we’re still technically in the dog days of summer, the Disneyland Resort has officially kicked off its Halloween Time season. In case you missed it, we had an extensive recapping of all the Halloween Time offerings which you can read all about here.

But outside of pumpkins, treats, and orange bunting there’s a lot of other goings on in the parks to catch up on, too. As the #Disneyland60 Anniversary Diamond Celebration officially came to a close last Monday, we find that the parks are slowly starting to purge of all the sparkly celebration decorations and replacing them with Halloween Time regalia.

This weekend also launched the return of the Disneyland Resort’s AP Days which are being held at Disney California Adventure. The AP offering includes freebies, character greets, and more.

Refurbishments around the park continue as well including buildings on Main Street and Peter Pan’s Flight in Fantasyland. Ariel’s Undersea Adventure is also down for a few weeks for some maintenance. Plus, the mass of dirt and steel currently known as the construction site for the Star Wars themed land continues to be a dizzying array of progress.

We’ll also take a quick night-walk through the park for a look at the return of the Fantasy in the Sky fireworks plus entertainment at Tomorrowland Terrace. We’ll also do another merchandise run with a focus on the Nightmare Before Christmas.

All of this and more in our latest pictorial! Enjoy!

Signage at Mickey and Friends is updated to promote the “last chance to check in” for the Tower of Terror attraction.

Maps and Time’s Guides are updated for Halloween Time.

The Diamond Days Celebration sweepstakes signage and electronic ticker have all been removed.

As of this weekend, there was still #Disneyland60 merchandise available at the Disney Showcase.

The Haunted Mansion Holiday is technically an offering of Halloween Time but it will remain through January 2 until the end of the Disney Holidays. New to the Mansion this year is a full-size Sally and a Sally-inspired gingerbread house.

There was a 35-minute delayed opening for the Haunted Mansion Holiday on Saturday.

FastPass is offered for Haunted Mansion Holiday but not when the attraction is down.

The switchbacks near the back of the Mansion were removed and in their place is a new checkpoint used to collect FastPasses. The changes are likely tied to the upcoming digital FastPass system coming to the Resort.

Standby lines for attractions are typically longer when FastPass is introduced so it’s ironic that in order to introduce a system that will make lines longer that they had to REMOVE sections of queue that will be able hold people.

That doesn’t fare well for Magnolia Park which is often used as overflow queue for the Mansion. It may well soon be a common occurrence to see that area used for standby guests once FastPass returns regularly to the attraction.

A new graveyard has emerged on the hill behind the mansion featuring several tombstones that are now intermixed with Jack-O-Lanterns.

Turnstiles were removed at the exit to the Haunted Mansion.

Decorations all around the park celebrate the Halloween Time season. Mini Oogie has returned to the New Orleans Square popcorn cart near the Haunted Mansion.

The French Market has its nightmarish decor. 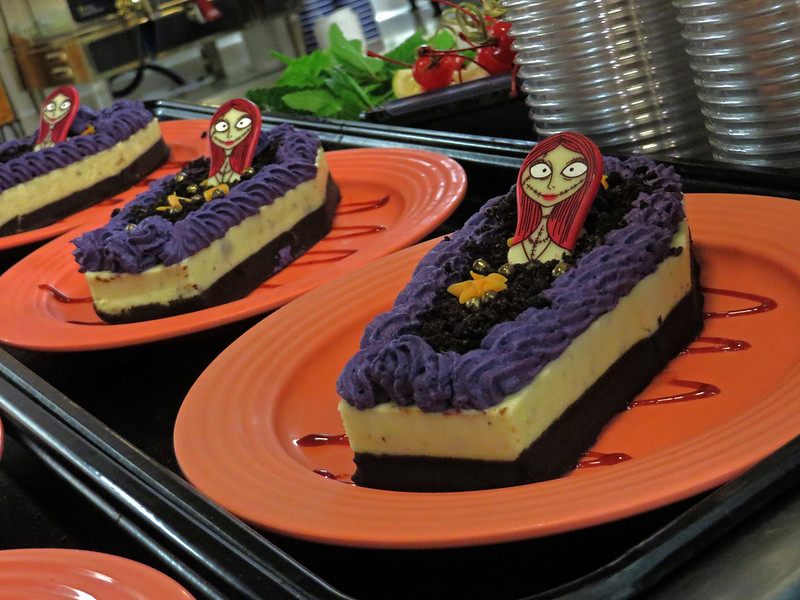 Fanciful Halloween Time desserts have also debuted including this coffin confection inspired by Sally from The Nightmare Before Christmas.

Main Street, USA also has its smattering of orange and yellow bunting along with dozens of pumpkins all up and down the street.

From windows to ledges and more you’ll find jack-o-lanterns everywhere.

Shop windows are also all decorated for Halloween Time.

A look at the newly revealed facades.

Anybody miss the Main Street Cone Shop on Center Street?

Walking right on down the middle of Main Street, USA.

All of the blue Diamond Celebration bunting on the castle as well as the 60th medallion over the drawbridge have all been removed.

Flag banners are also back to normal. 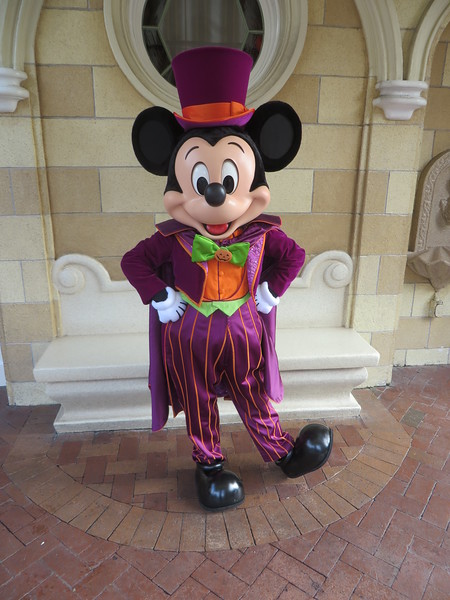 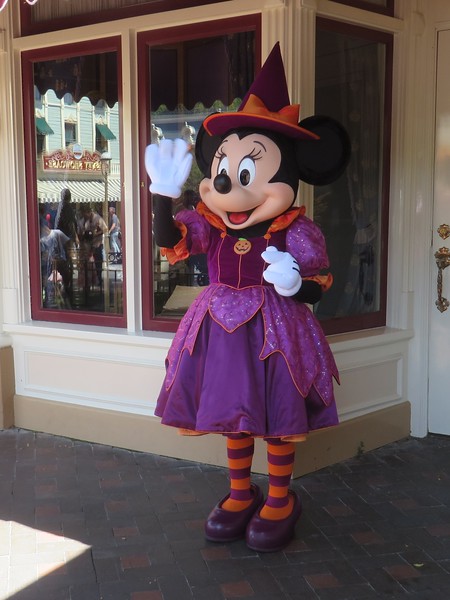 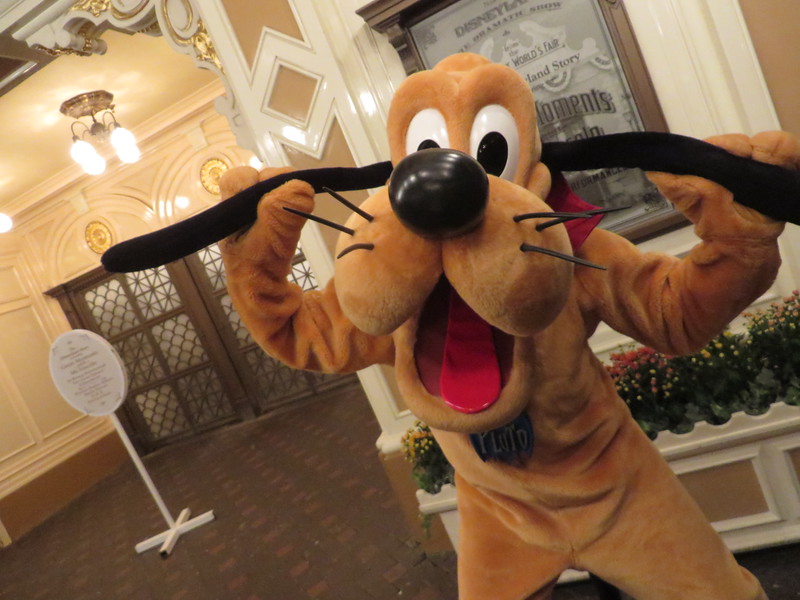 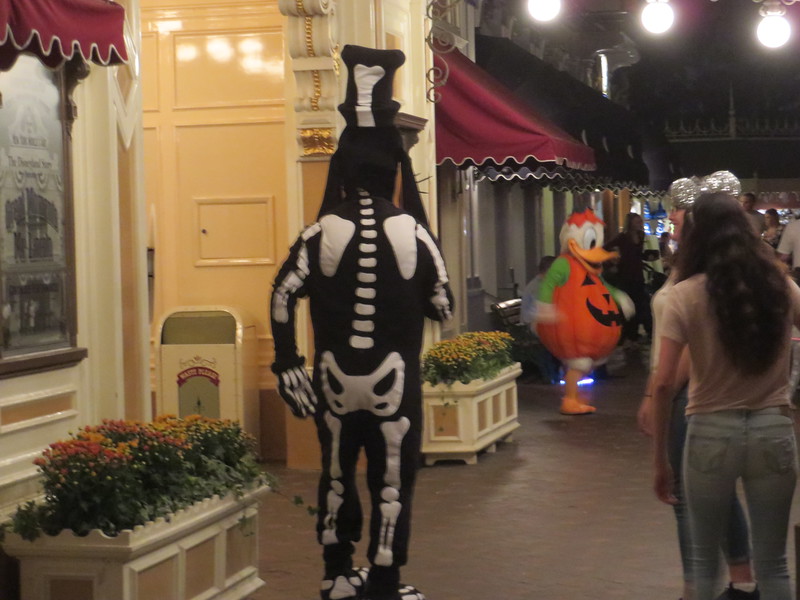 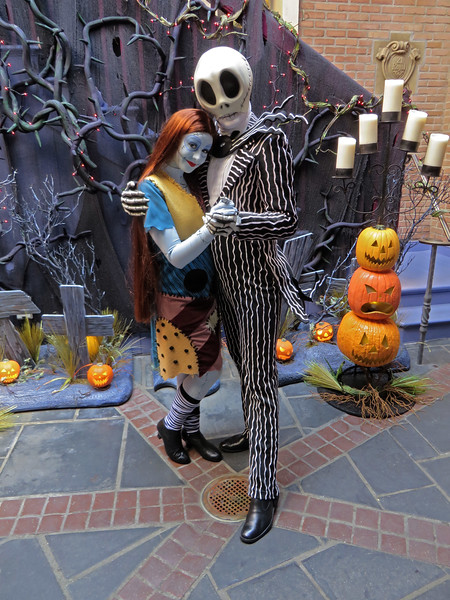 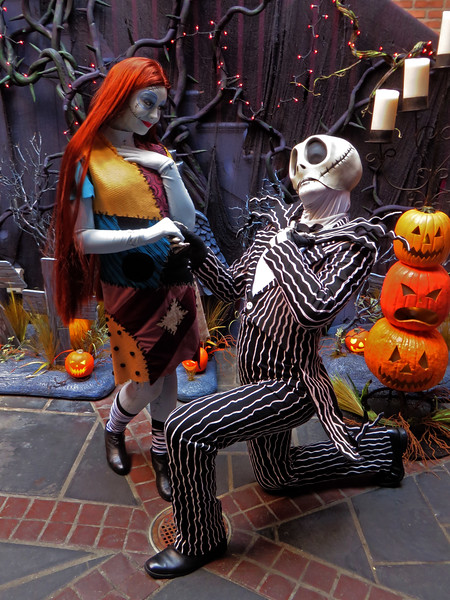 A magical crew from Agrabah were greeting guests at Aladdin’s Oasis.

Jasmine can now be seen wearing her new outfit. What do you think?

Practically perfect in every way.

Traces of the Diamond Celebration have also been removed from Buena Vista Street. No Halloween Time decorations to be found, though.

No Diamond Celebration here either.

The Diamond Celebration Photo Spots are still around.

About the only “Halloween Time” you’ll find at Disney California Adventure is the farewell season that’s been marketed onto the Tower of Terror.

Set to meet its end after January 2, 2017 to make way for the theme centered around Marvel’s Guardians of the Galaxy, the attraction has a special “Late Check In” that occurs after 7pm each night.

During Late Check-In, the attraction’s drop sequence occurs not only in complete darkness but also without any audio sound effects. It adds a new level of fear to the attraction.

A special photo-op has been setup outside of the attraction.

AP Days are back bringing with it a familiar assortment that includes:

I followed signage in the park to the Paradise Pier Gazebo only to find that for today there was no AP Days because of a private event. After the sunny trek in vain to the back of the park, I was looking forward to some air conditioned respite at Stage 12…

I moseyed over to Stage 12 only to find a really long line (in the full-strength summer sun) to get into the building which effectively contains just two character meet and greets. Considering the wait was upwards of 20 minutes or more I opted to not bake for the sake of a button.

It seems like a strong re-think is needed for this offering. Well-intentioned as it may be it seems quite pretty poorly executed.

Thankfully, Cast Members were available to distribute the button without having to wait in the sun in the long line.

Pamphlets about the event.

A look at the pamphlet.

Although the Jammin’ on the Backlot party has been removed, the Food Truck is still selling the popular Tot-chos and Fanta Orange & Cream Frozen Slush.

Valid Annual Pass is required for all Guests entering an AP Days event’s venue/offering. Photo ID may be required. You can contact Disneyland’s Annual Pass centers at (714) 781-PASS or (714) 781-7277.

Forget your troubles, come on get happy!

No AC for you here.

The fountains were on in Paradise Park.

Decorations of some sort on the menu for the Golden Vine Winery.

A panoramic view of the lay of the land.

Looks like some more line work, this time at Mickey and Friends Parking Structure.

Work seems to be wrapping up on various areas of Tom Sawyer Island.

No touchy. Tom ‘n Huck ONLY.

Work continues on the Sailing Ship Columbia which will soon be finding itself home to Jack Sparrow and other pirate foe when Fantasmic! returns next year.

What a mishegas, Christmas Fantasy and Paint the Night! If they want to truly terrorize guests for Halloween Time, they should just roll that Slinky Dog parade float with the eyes digital screen eyes turned off. Yikes!

Fantasy in the Sky fireworks spectactular

Now that the #Disneyland60 celebration has ended, Disney has retired the Forever fireworks spectacular and replace it instead with the much simpler and much shorter Fantasy in the Sky.

Live entertainment has been back for a few weeks now at the Tomorrowland Terrace. Tomasina was playing to the crowds on Friday.

The Jack-O-Lanterns at the Emporium light up at night.

I love that Fortuosity is over taken by ravens for Halloween Time.

Paint the Night Parade is gone for now so you can paint the night yourself with glow merch.

These happy haunts are on vacation for the next three months.

There’s tons of Nightmare Before Christmas merchandise too including these Jack and Sally action figures.

Jack and Sally Mickey and Minnie.

Never noticed the screens at Mickey and Friends before. Are these new?