A new seven-story parking structure with 6,800 spaces is in the works at the Disneyland Resort and according to the OCR, Disney is also moving forward to seek permits for construction that confirms previously rumored additions. A new pedestrian bridge that replaces the current Carousel Inn & Suites is part of the plan which will connect the Disneyland Resort to the new parking structure and proposed security area and new transit hub at the eastern end of the Anaheim Resort District area.

The new map shown below was tweeted by the OCR and showcases the proposed work for the area which aligns quite closely to the infographic that MouseInfo contributor VashSky shared with us last month. Noticeably absent from the plans are any form of transportation from the parking area to the Esplanade area; early rumors had indicated that a moving walkway was considered to help make the long walk to–and especially from–the parks a little more enjoyable and easy. Alas, it seems that guests will begin (and end) their days at the Happiest Place on Earth with the brief albeit considerable walk between their cars and the park entrances.

The new rendering showcases a security area in the transit hub that guests must seemingly go through prior to getting to the new pedestrian bridge. That would seem to indicate that the entire stretch currently occupied by the Carousel Inn would be a secured area. That potentially means that guests staying in Good Neighbor Hotels would not be able to access the parks without first going through the new security area that will be to the east of them. This would eliminate the ability for hotel guests to walk straight up from Harbor Boulevard.

Not touted in the graphics but seemingly indicated by a dotted line on the map is what appears to be the newly re-routed monorail path that would skirt around all the new construction before making its way back to its normal course through Disney California Adventure Park and Disney’s Grand Californian Hotel & Spa. Also missing from the map is any sort of indication as to what will become of the existing transit hub currently filled in with light blue coloring above. VashSky’s infographic indicates the area being used for an upcoming Marvel Studios land redevelopment in the Hollywood Land section of Disney California Adventure which has yet to be announced.

Plenty of details are yet to be revealed so it should be interesting to see how this all develops. What are you excited or worried about with all the progress? What theme do you think the parking structure will have? Avengers? Star Wars? Frozen? Villains? It’s going to be an interesting, and construction-heavy few years at the Disneyland Resort!

“The Eastern Gateway is part of our substantial investment in Anaheim, which will provide additional guest parking and help to alleviate congestion in the Resort District as we continue to expand the Disneyland Resort.”

Other upcoming projects getting underway at the Disneyland Resort include the new Star Wars themed land and a new high-end hotel north of Downtown Disney.

Construction on the parking structure, transit hub, new security area and pedestrian bridge are being grouped together under what is known as the Eastern Gateway Project which is expected to be completed  by late 2018.

Sound off in the comments below!

REVIEW: 4DX format of FROZEN 2 is a holiday delight 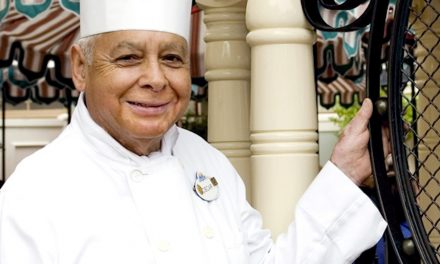