Disney, among other major studios, will be releasing more feature films for Dolby Cinema™, it was announced recently. Dolby Cinema is a combination of Dolby Vision™ projection service and Dolby Atmos® sound system offering a fine-tuned customized theatrical experience with crisp digital imagery immersive sound. We had a taste of the Dolby Cinema last week with an exclusive screening of STAR WARS: THE FORCE AWAKENS and the efforts are undoubtedly noticeable.

Disney’s upcoming animated animal adventure is one of the soonest to mass distribute in Dolby Cinema with ZOOTOPIA coming out in theaters on March 4, 2016. The upcoming live-action reboot of THE JUNGLE BOOK will also be released in the custom format, releasing in theaters April 15, 2016.

Not every theater is capable of running format but the El Capitan Theatre in Hollywood is amongst the list. Check out the official Dolby Cinema site to find a location near you.

“With the announcement of the new slate of highly anticipated animated and live-action stories, audiences will get to experience a variety of theatrical titles with vivid imagery and immersive sound when visiting a Dolby Cinema,” said Curt Behlmer, Senior Vice President, Content Solutions and Industry Relations, Dolby Laboratories. “Collaborating with the world’s leading creatives in Hollywood, we are able to provide an extraordinary cinema experience to audiences around the world.”

Following the successful Academy Award® nominated Dolby Cinema titles The Revenant and The Martian, Twentieth Century Fox returns with Deadpool. In the movie, a former Special Forces operative turned mercenary is subjected to a rogue experiment that leaves him with accelerated healing powers, and he adopts the alter ego of Deadpool.

“We pride ourselves on embracing the latest technology that helps bring our stories to life for all of our tent-pole releases, and the use of Dolby Vision and Dolby Atmos for The Revenant and The Martian are testaments to the value Dolby can deliver to Hollywood movies,” said Chris Aronson, President of Domestic Distribution, Twentieth Century Fox. “Dolby Vision is a great tool as hundreds of colors play a major role in our storytelling, along with the moving audio of Dolby Atmos—these technologies will forever change the way moviegoers watch our films.”

Lionsgate’s The Divergent Series: Allegiant continues the science-fiction dystopian saga, with Tris and Four venturing into the world beyond the wall, where they are taken into protective custody by a mysterious agency known as the Bureau of Genetic Welfare.

In Lionsgate’s Now You See Me 2, the Four Horsemen return. One year after outwitting the FBI and winning the public’s adulation with their Robin Hood–style magic spectacles, the team resurfaces for a comeback performance in hopes of exposing the unethical practices of a tech magnate.

In addition to Disney’s previously announced live-action film The Jungle Book, due out April 15, 2016, the Walt Disney Animation Studios feature Zootopia will be released for Dolby Cinema. The modern mammal metropolis of Zootopia is a melting pot where animals from every environment live together—where no matter what you are, from the biggest elephant to the smallest shrew, you can be anything. But being the first bunny on a police force of big, tough animals isn’t so easy, so Officer Judy Hopps jumps at the opportunity to crack a case, even if it means partnering with a fast-talking, scam-artist fox, Nick Wilde, to solve the mystery.

Dolby Cinema begins with the filmmaker’s vision—using the full storytelling capabilities that Dolby offers in image and sound production to transform the way movies are made. Combined with state-of-the-art image, sound, and acoustic capabilities, every visit to the theatre is a completely captivating cinematic event.

Dolby Cinema features the Dolby Vision projection system, which uses state-of-the-art optics and image processing to deliver high dynamic range with enhanced color technology and a contrast ratio that far exceeds that of any other image technology on the market today. The result is a richer, more detailed viewing experience that delivers strikingly vivid and realistic images and makes viewers feel like they are in the movie’s world.

Dolby Cinema also includes the Dolby Atmos sound technology, which moves audio around the theatre, even overhead, with amazing richness and depth. The combination of Dolby® technologies with the design and comfort of the Dolby Cinema will make audiences feel closer to the onscreen action than ever before. 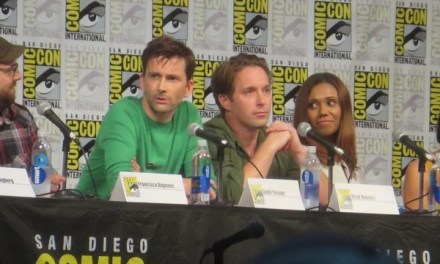 WATCH: It was a duck-blur for DuckTales panel at #SDCC