Hong Kong Disneyland is doing up the second half of this year big with several new entertainment options for guests to look forward this year. From this fall’s debute of DISNEY PAINT THE NIGHT to new offerings for Halloween and the Holidays, there’s quite a bit coming to the newest Disney Park.

For the holiday season, Elsa and Anna will make their first Hong Kong Disneyland character appearances this winter along with Duffy’s friend ShellieMay for special meet and greets and of course tons of related merchandise and food options.

Before the snow starts to fall though, the park will introduce the all new “Horrors of the Amazon” show which will feature local celebrity Power Chan Kwok-pong.

There will also be two show stops during the parade. Guests will be able to “paint the night” with a special Paint Brush that will literally change the colors of the performers’ costumes. Boring from the popular GLOW WITH THE SHOW EARS in the United States, there will be new “Mickey Glow Mitt” and “Minnie Glow Bow” merchandise items that change the colors to match the passing floats.

(Hong Kong, August 14, 2014) From October to December, guests visiting Hong Kong Disneyland at nighttime will see the Park in a whole new light. The brand new “Disney Paint the Night” parade starting from October 1, together with “Disney Haunted Halloween” and “Disney Sparkling Christmas”, will amaze and mesmerize our guests as light creates vibrancy, mystery and romance at the Park.

“Disney Paint the Night”, a first ever fully LED parade created by Walt Disney Parks and Resorts, is a state-of-the-art, vibrant wonder that immerses many of our classic Disney and Pixar stories in magical, luminescent worlds. Disney Paint the Night features seven original floats containing over 740,000 individual lights. This fantastical parade will bring to life guests’ favorite Disney and Disney∙Pixar stories in unexpected and thrilling ways, illuminating the whole parade route every night.

New technology with imagination unleashed to wow the guests
“Disney Paint the Night” is composed of seven units of creative floats including Tinker Bell Opening Unit, Monsters Inc. Unit, Cars Unit, The Little Mermaid Unit, Belle Candlelight Unit, Toy Story Unit, Mickey & Friends Finale Unit. In this all new technologically advanced parade, Mickey is going to “paint the night” in dazzling Disney dreams of light, and with the scintillating powers of Tinker Bell’s pixie dust, Mickey and his friends create fantastic visions, which come to “light” the streets of Hong Kong Disneyland. The parade features many beloved Disney and Disney·Pixar characters, and for the first time, we have invited Lightning McQueen, Sulley and Mike to join the parade at Hong Kong Disneyland.

“The creative team spent over 2 years and developed over 1,000 scenic and lighting designs to ensure ‘Disney Paint the Night’ will ‘wow’ our guests in a totally new and innovative way. New technology coupled with unleashed imagination takes this parade to a whole new level and Hong Kong Disneyland guests will enjoy a colorful feast for their eyes.” said David Lightbody, Director of Entertainment and Costuming, Hong Kong Disneyland Resort.

From the design of the floats, props, costumes and cosmetology, to the lighting, music and choreography, innovation and strong story telling have driven the creation of “Disney Paint the Night”.

The vibrant lights feature not only on the floats, but also on Disney characters, dancers and props. More than 80 Cast Members per night are involved in presenting this never-seen-before nighttime parade.

Over 25 different styles have been applied in the design and construction of the costumes and many of them have been developed specially for this parade. Each costume has its own very sophisticated system of lighting controls. The team used new technologies in ways that have never been used on costuming before to bring a new perspective to our guests.

The talented Cosmetology team (hair, wigs and make up) at Hong Kong Disneyland has developed a new technique to create fiber optic wigs that can be styled to create a beautiful glowing effect. They also developed exquisite fiber optic eyelashes that can change color which significantly enriches the whole parade performance.

Interactivity allows Guests to immerse themselves in the experience of “Disney Paint the Night”
Interactivity is always a key to enhancing guests’ immersive experiences. There are special magic enabled merchandise items developed for the parade. The Park especially designed the all-new interactive merchandise – “Mickey Magic Paint Brush” which allows guests to interact with performers.

During two show stop moments of “Disney Paint the Night”, guests will be able to “paint the night” with the Paint Brush. It can literally change the colors of the performers’ costumes at the touch of a button. The floats can also ‘talk’ to all other magic-enabled merchandise items, including “Mickey Glow Mitt” and “Minnie Glow Bow” and change the colors of the items to give guests a chance to really become a part of the parade.

The Park has also prepared a series of specialty food and beverage options with a glowing and glittering theme to further complement this latest nighttime experience.

To further celebrate the vibrant spirit of “Disney Paint the Night”, guests can pay a visit to the Tomorrowland Bootique and to be “painted” in luminous make up by our professionals and join the dance party with DJs and an all new illuminated stage performances in the Tomorrowland Party Zone.

Lights of mystery permeate the Park during Haunted Halloween
Featuring an all-new show “Horrors of the Amazon”, “Sideshow Carnival Extraordinaire” and more ominous entertainment offerings, the Haunted Halloween footprint will spread from Adventureland and seep into many other themed lands. Available from October 2, on every Friday to Sunday in October, guests will see a different Hong Kong Disneyland at night time as they journey through many new eerie and mysterious stories.

The all new “Horrors of the Amazon” show will be staged at the Theatre in the Wild. The show will feature local celebrity Power Chan Kwok-pong who will act as the adventurer Jonas Brisbane and narrate his thrilling tale of his adventures in the Amazon. His illustrious adventures and foreboding encounters will capture and enthrall guests. This is the very first time Hong Kong Disneyland is engaging a local celebrity as a performer in a show.

The mysterious world of lights seeps across the Park and presents a different nighttime atmosphere. In Fantasyland’s Fantasy Garden, Mickey and his friends are hosting a masquerade ball this Halloween. The popular “Sideshow Extraordinaire” in Adventureland, “Grizzly Gulch Halloween Fair”, “Graves Academy” and “Revenge of the Headless Horseman” will return this year for more haunting fun. Toy Story Land, has been invaded by more of Sid’s mutant toys including “Babyhead”, ”Ducky” and “Legs”, who have all taken up residence in an attempt to escape their ever destructive owner.

Night tickets for Disney Haunted Halloween are priced at HK$340 and will be available as of September 1.

Frozen, the highest grossing animated film of all time, will become one of the highlights of this season. Frozen’s Queen Elsa and Princess Anna have arrived and are eager to meet guests in Hong Kong Disneyland for the first time. In addition, a series of Frozen-themed merchandise items and food and beverage options are the perfect complement to this snowy Disney experience.

To celebrate the holiday season, Duffy will also introduce his friend ShellieMay for her first appearance at Hong Kong Disneyland, to share their friendship during this romance filled season, along with an array of new and exclusive themed merchandise items.

“Through the ‘Disney Paint the Night’ nighttime spectacular and special seasonal events during this coming fall and winter period, we are inviting guests to explore a never-before-seen experience of vibrant lights and to immerse themselves into a Disney night that is beyond imagination,” concluded David Lightbody. “The nighttime enjoyment continues after the parade as guests enjoy the climax of their evening by viewing ‘Disney in the Stars’ Fireworks Spectacular.” 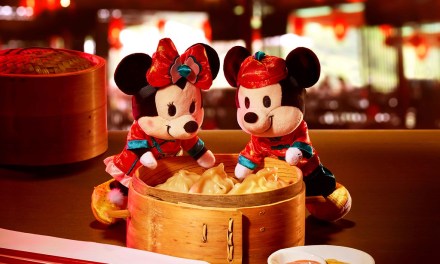