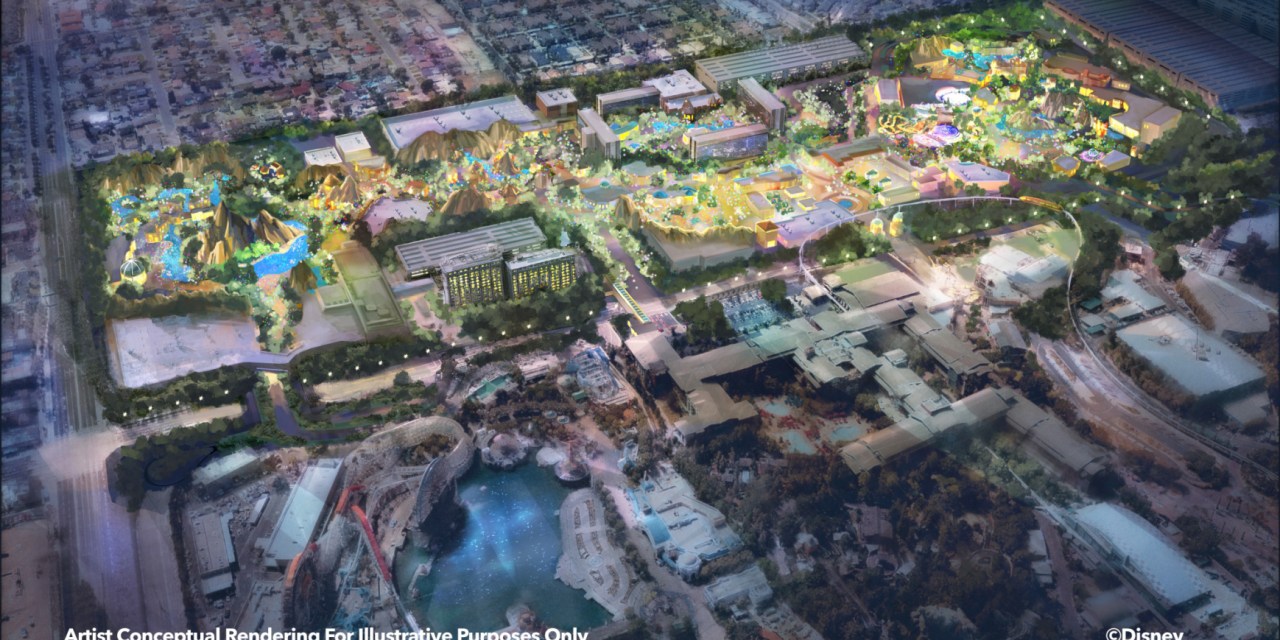 As part of an initiative to work with the City of Anaheim to remove restrictions on the use of its available land, Disneyland Resort released the above rendering of a potential expansion of Disneyland Park and Disney California Adventure into the west side of the property surrounding its hotels. No concrete plans or details have been released, although fans will no doubt pore over the image to find clues as to what attractions might await us.

This does not appear to be plans for a third theme park, although the Toy Story parking lot does show plans for new hotels, retail and dining in a kind of satellite Downtown Disney destination.

Disney lists possible inspirations for expansions to both parks, including the Fantasy Springs land at Tokyo DisneySea (featuring attractions based on TANGLED, PETER PAN, and FROZEN) for Disneyland, and Zootopia (under construction at Shanghai Disneyland), Toy Story Land and TRON Lightcycle Run (both from Walt Disney World) for Disney California Adventure.

Disney has set up an official site to help sell the plan to city officials and the public here. So far city officials have indicated that they are receptive to the plan, no doubt in part to the dearth of tax revenue after the COVID-19 pandemic left Disneyland’s gates closed for over a year.

More from the Orange County Register on the plans:

DisneylandForward is Disney’s effort to work with the city to grow the Disneyland resort, update the blueprint for the resort district and propel Anaheim’s economic rebound following the COVID-19 pandemic.

Disney will be asking the city over the next weeks and months for more flexibility in plans approved in the 1990s in order to be able to add a mix of theme park, hotel, retail, dining and entertainment on the eastern and western edges of the Disneyland resort.

Disneyland portfolio executive for Walt Disney Imagineering Jeanette Lomboy said during a media briefing on Thursday, March 25 that the DisneylandForward plan includes what could be possible in the future at the Disneyland resort with more flexibility and approvals from the city.

“Because of the current rigid district structure, we just need more flexibility,” Lomboy said. “We’re excited about the possibilities and ready to dream. Believe me, we have no shortage of ideas, content or stories to tell or build.”

The Immersive Theme Park westside expansion envisions a theme park on the Downtown Disney and Lilo and Stitch parking lots woven amid the Disneyland Hotel and Paradise Pier Hotel.

Concept art of the west-side site shows a central mountain surrounded by water with buildings interspersed on the south end of the property. A mountain ridge to the west separates the theme park from nearby neighborhoods.

The west-side site links up with Downtown Disney near the unused AMC Theater and ESPN Zone.

Concept art of the northern end of the west-side site includes an Autopia-like car course and a Dumbo-like spinning ride.