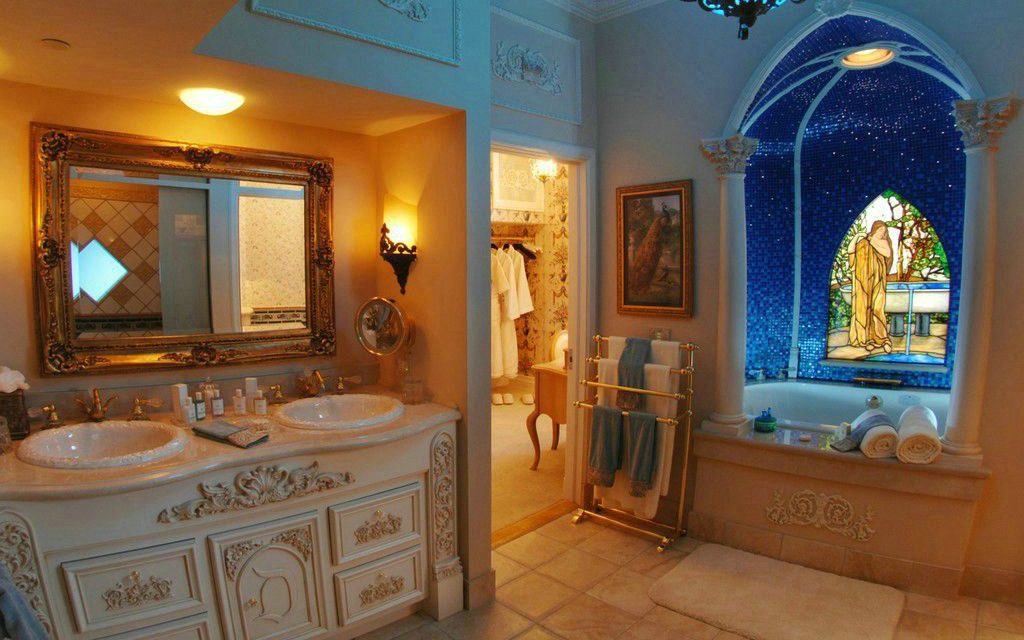 What could be more magical than living INSIDE of Disneyland? The Disneyland Dream Suite — located above the Pirates of the Caribbean attraction at Disneyland Park in California — literally realizes the possibility of that dream. The lushly appointed home away from home features an enclosed open-air patio, living room, large covered balcony overlooking New Orleans Square (with great views of Fantasmic!) and two master suites with bathrooms.

EDITOR’S NOTE: Please be aware the content on this page is re-posted from 2008 so details and information may no longer be accurate.

Originally conceived as an expanded living space for Walt Disney and his family, the 2,600-square-foot Disneyland Dream Suite was never realized in Walt’s time as he died in the middle of construction. The location was used for various purposes including backstage office space and eventually, in 1987, a Disney Gallery art retail space that was open to theme park guests. During the Year of a Million Dreams Disney Dreams Giveaway marketing campaign, the space was revived as a magical suite in which lucky park guests could win a night’s stay.

The content presented below is an amalgamation of two separate posts in which we toured the Disneyland Dream Suite from two separate visits. ENJOY! 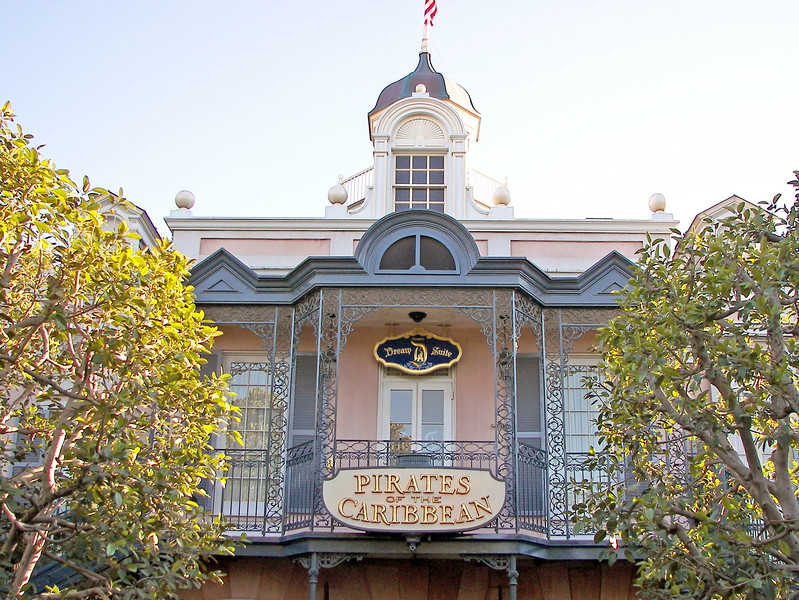 Inside the Disneyland Dream Suite

The suite is the epitome of Disney magic with references and hidden surprises throughout. Each room represents Disneyland’s magical realms including Main Street USA, Frontierland, Fantasyland, Adventureland, and New Orleans Square.

Several spaces in the suite offer the ability to activate a special Good Night Kiss with musical orchestrations by Glen Baker paying homage to Disney films or attractions. As the music plays, special magic occurs in the rooms — it could be the grandfather clock in the sitting room, figurines in the display cases, magical changes in the paintings on the walls, and more! 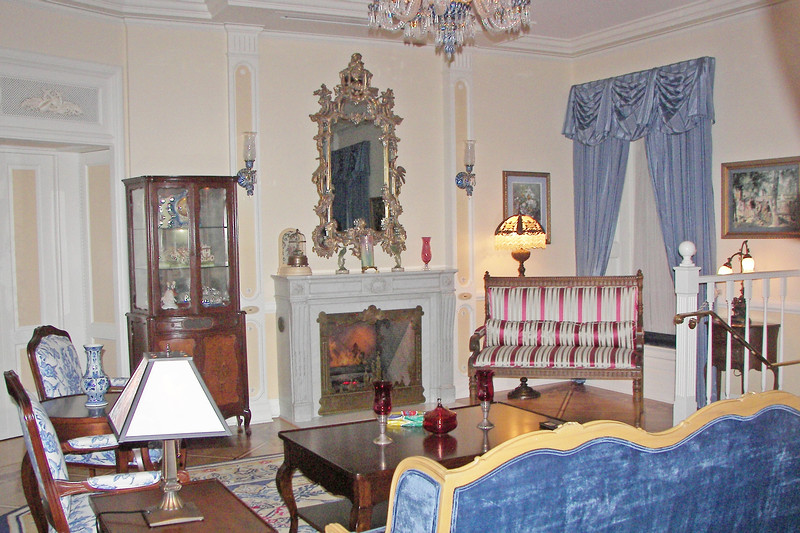 Through the doorway at the top of the stairs is the Sitting Room, designed in a French Provincial style reflecting the New Orleans Square setting. Unusual decorative items like a full-size carousel horse, a mechanical songbird and original wall paintings of European castles will conjure up memories of Walt Disney and the inspirations that went into creating the magical world of Disneyland.

And yes, there IS a television in the sitting room; it slides down from the ceiling just over the fireplace! 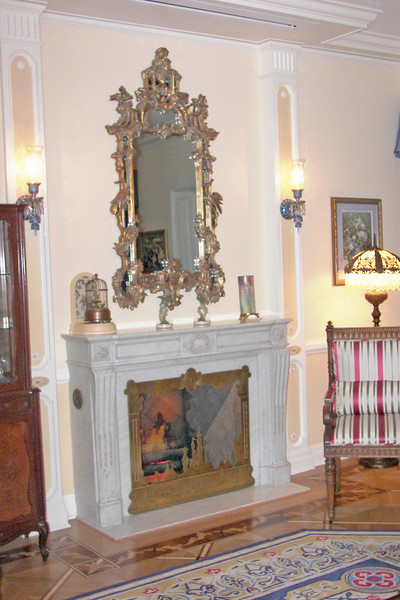 A beautiful grate in front of the faux fire accentuates the fireplace which is one of the only original elements in the suite from its original construction. If you watch the flames closely, the embers occasionally spark like fireworks over the flames.

Yep, Hidden Mickeys will be found. 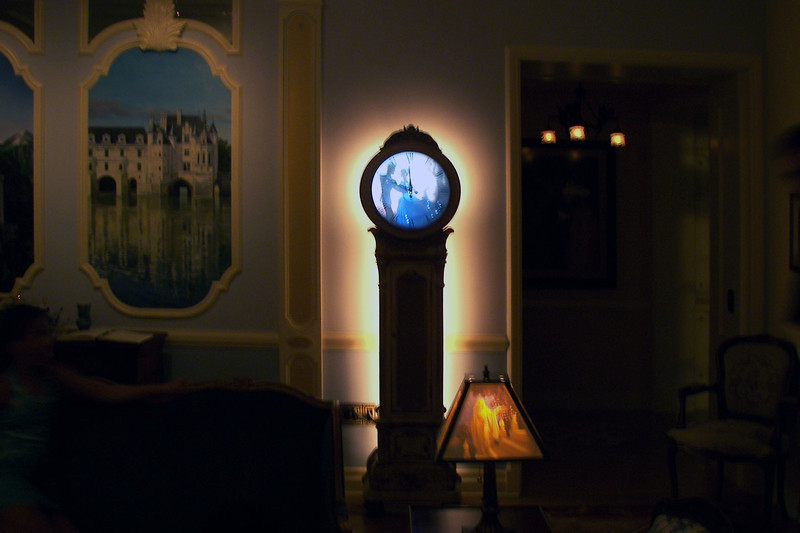 On the hour (from 7am-11am and then again from 4pm-midnight) the grandfather clock in the Sitting Room comes to life magical moments. The feature can be turned off but why would you??

You might see Pinocchio and Geppetto on the clock face while you hear “When You Wish Upon a Star.” Or perhaps you see Cinderella and her prince dancing on the clock face as the figurines and glass slipper come to life in the display case. Still other times you might hear the sounds of the Enchanted Tiki Room and see the birds inside the bird cage spring to life and sing along.

During the magical clock moments the mirror turns into a beautiful painting depicting Herb Ryman’s concept image of Sleeping Beauty Castle used by Walt in his pitch to secure funding to build Disneyland.

The Master Bedroom is on the side of the residence nearest Adventureland, and its lush décor and atmosphere evoke the exotic flavor of jungle adventure stories as told in the Victorian era. 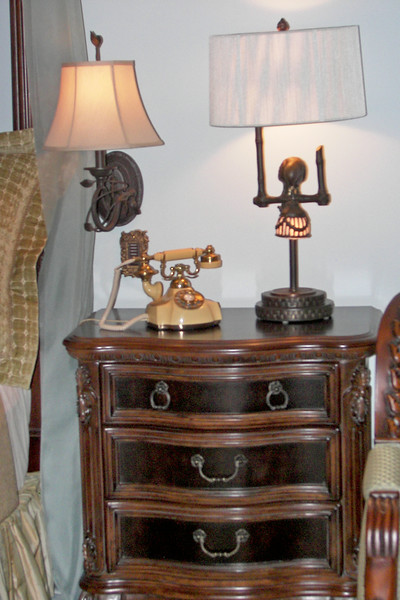 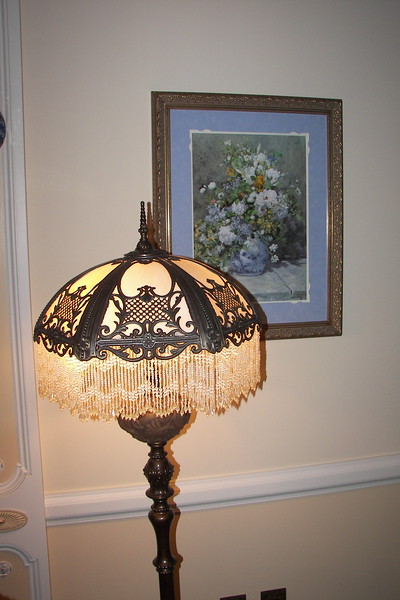 The Master Bedroom comes to life during its Good Night Kiss with lighting effects and music to create a serene and mysterious landscape. A projected moon and clouds form Captain Hook’s galleon as it flies past while a painting on the wall of a lagoon finds itself temporarily with mermaid inhabitants.

While the Master Bedroom immerses us fully in the wiles of Adventureland themes, the bathroom takes us to Fantasyland for a complete royal treatment. Swan sink fixtures and tiara sconces accent the décor.

A collection of glass butterflies can also be found here, a motif is repeated several times throughout the suite as an homage to Walt’s wife Lilian. 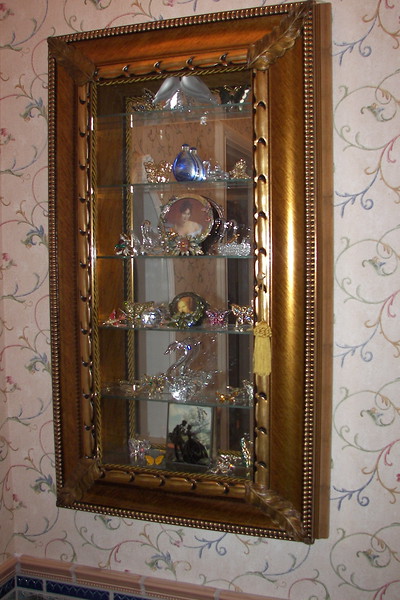 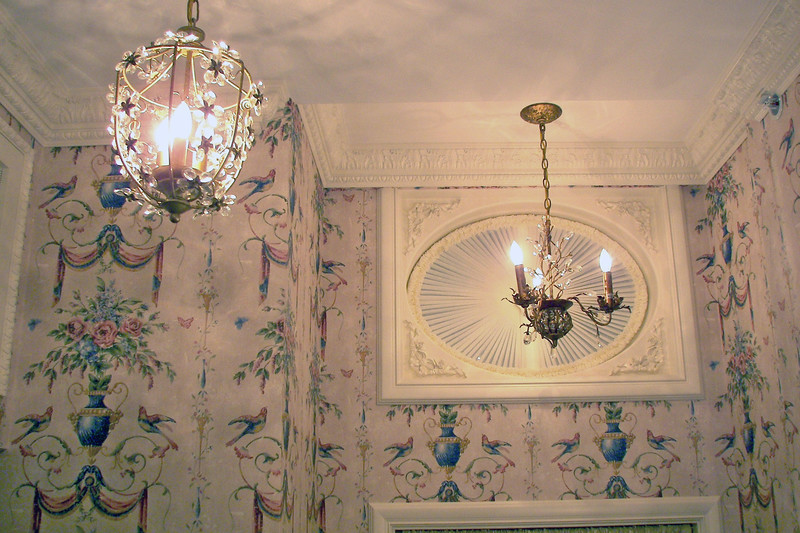 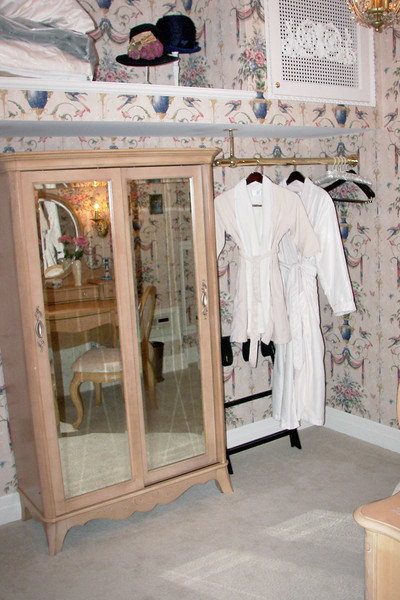 The luxurious whirlpool tub becomes central to Good Night Kiss which dims the lights in the bathroom, cues relaxing music, and activates LED lights hidden in the tile to form a beautiful starry sky — and yes another Hidden Mickey. The window is a replica of a Louis Comfort Tiffany stained-glass.

Strong Frontierland vibes emanate from this space. Originally conceived for Walt as an informal sitting room, this space would become a bedroom in the spirit of early 20th century innovation and the American frontier with an earthy color scheme, leather furniture, an electric train and vintage mechanical toys, and an authentic Cinderella-Franklin cast-iron stove with faux silk flame similiar to the effect originally used in the Pirates of the Caribbean attraction.

Oh yeah, and the armoir hides a Playstation 3 and collection of video games – the television is actually hidden in the mirror on the wall! If you need a place to sit to play, the chairs at the foot of each bed are the actual screen-used chairs from the last live-action movie that Walt worked on, THE HAPPIEST MILLIONAIRE. 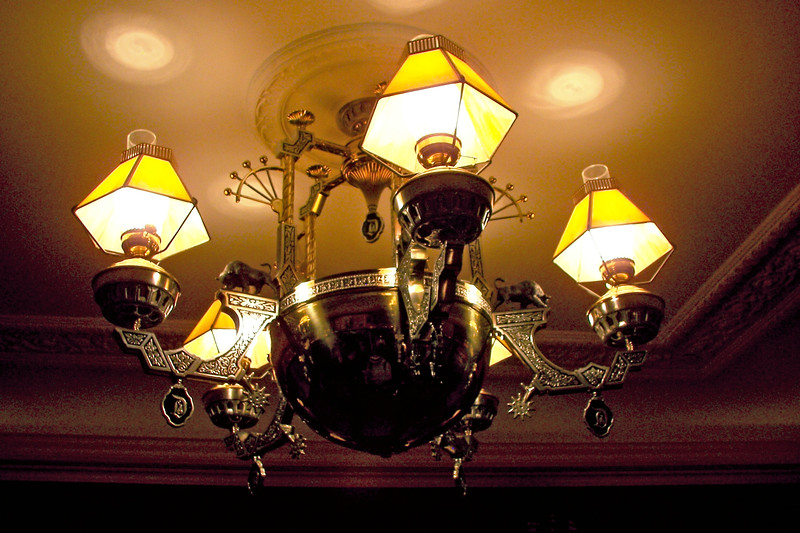 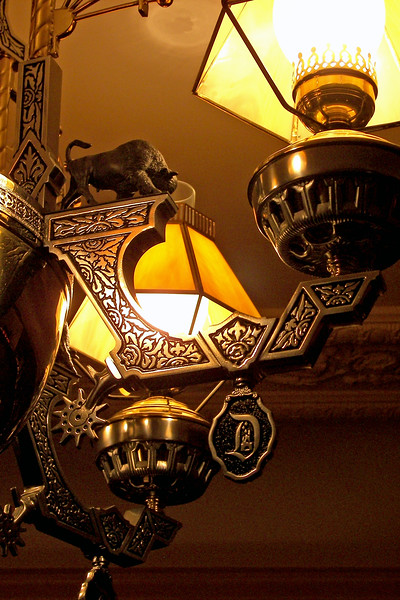 When the Good Night Kiss here is activated, the train inside the display case will spring to life and actually traverse the entire room along the crown moulding. As it passes various toys and trinkets on the shelf, they spring to life with motion, lights, and sound. The various items represented on the shelf are evocative of different things that might have inspired Walt for his various endeavors with Disneyland. 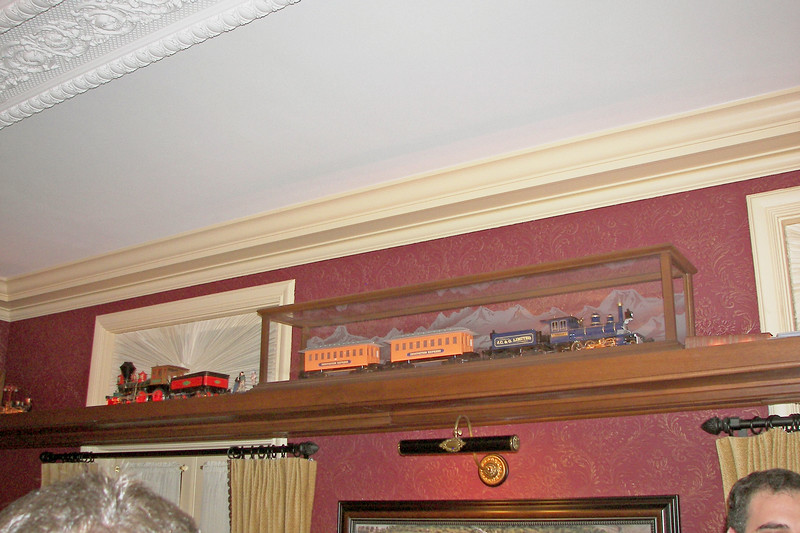 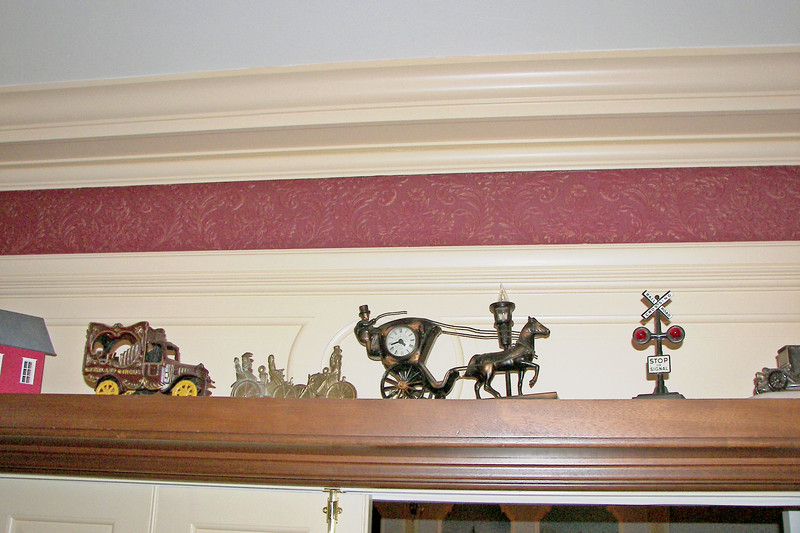 Fans will instantly recognize the concept painting of Disneyland as painted by esteemed artist and Disney Legend Peter Ellenshaw. When the magical moment here is activated, the room dims and the painting turns from daylight to night-time with twinkling lights coming to life in the painting.

With a distinct flair and vibe of Main Street, U.S.A., this charming bathroom evokes old timey vibes with a distinctly masculine feel that carries over from the bedroom. 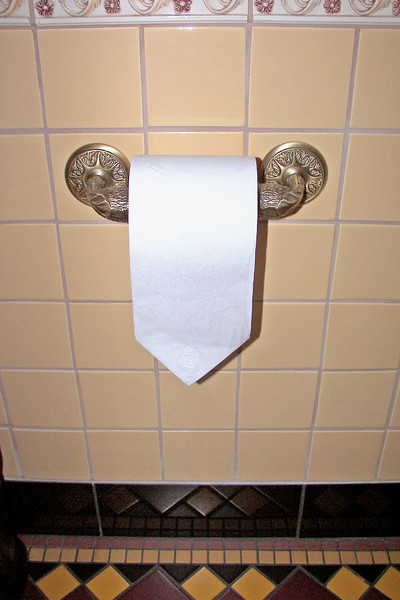 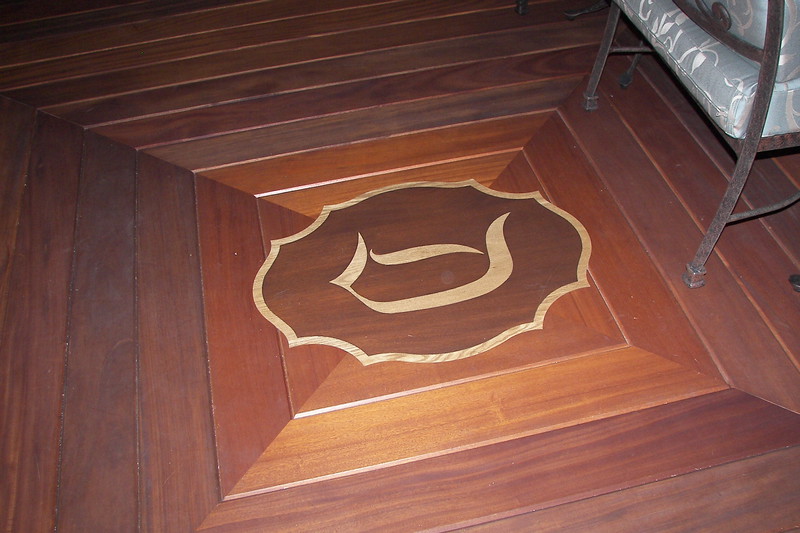 The Bayou-themed Patio, central to the Disneyland Dream Suite and open to the sky above, is filled with tropical vegetation, furnished with comfortable chaises and illuminated by Chinese lanterns.

Using a type of Disney magic familiar to guests on Pirates of the Caribbean, the Patio is also be visited by fireflies. 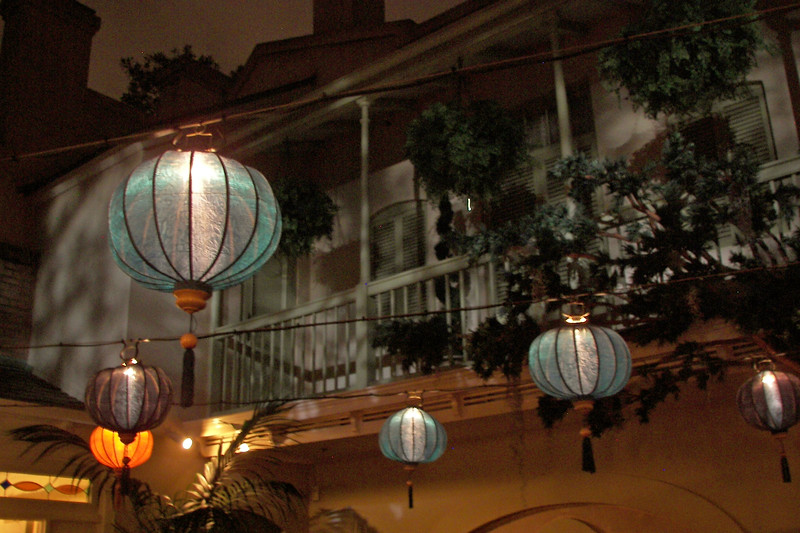 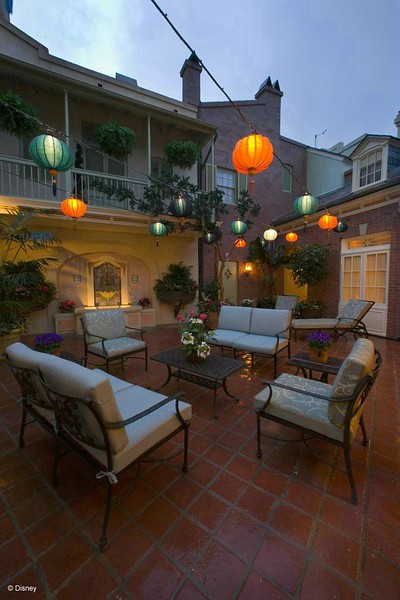 The Disney family crest features three lions and floral flourishes that are introduced on the fountain on that patio.

To allow the space to be ADA compliant and wheelchair accessible, Disney built an elevator near Tarzan’s Treehouse that connected into the suite creating a second entrance for the Disneyland Dream Suite. Upon accessing the elevator and entering the suite, you enter Legacy Hall which is also the offshoot to the concierge room where the Suite’s host is found to assist guests as needed overnight during their stay when the park was closed. From Legacy Hall, you can make an L-shaped right turn into Aviary Hall which leads to the Master Bedroom and Sitting Room space.

The lion statue here is a subtle homage to the Disney family crest which features three lions. 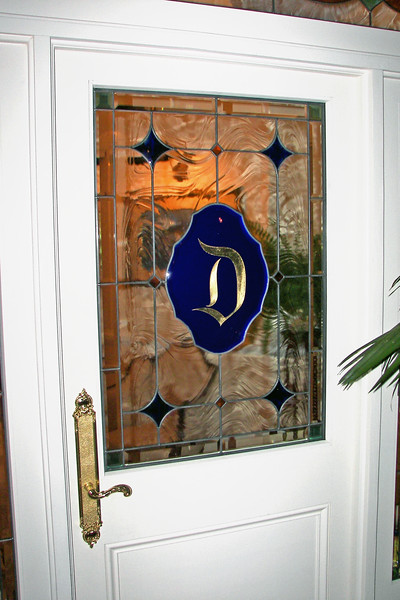 The floral flourishes here are also meant to evoke the Disney family crest.

Of course there is a guest book! 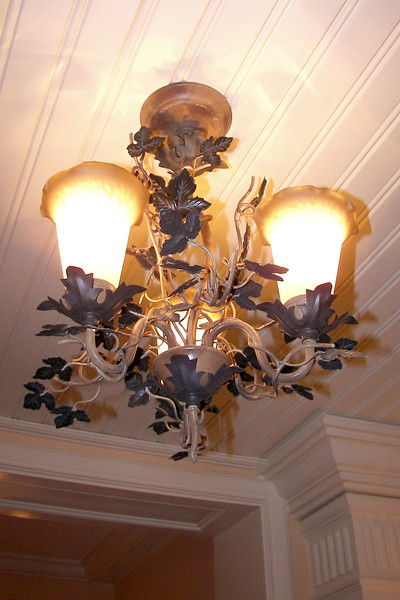 For even more pictures inside the Disneyland Dream Suite, visit our gallery to see images that didn’t make the cut for this article!

MORE INFO: GALLERY: Inside the Disneyland Dream Suite above Pirates of the Caribbean at Disneyland Resort

Behind the Scenes of the Disneyland Dream Suite

Vintage design illustrations, created under Disney’s personal direction, were recovered and used as inspiration for the look, furnishings and other décor elements in the Suite. Additional special design touches evoke memories of Disney’s diverse interests and the rich heritage of Disneyland.

“Our plan has been to use the renderings that Walt worked on with Dorothea Redmond and to replicate those as exactly as we can. Her illustrations were very specific, with a color and style for each room. But to make it special for the guests, we want it to be more than just a beautiful suite.  We want it to be filled with things that might have inspired Walt as he dreamed of Disneyland.”

In addition to that night’s lodging in the Disneyland Dream Suite, each selected winner of the Disneyland Dream Suite in the 2008 Disney Dreams Giveaway winner during the Year of Million Dreams was also be celebrated as the Honorary Grand Marshal in that day’s Disneyland parade (Parade of Dreams during the regular season and A Christmas Fantasy Parade during the holidays). The winner and their guests also enjoyed dinner, late-night snacks and beverages, and the dazzling view overlooking New Orleans Square and the Rivers of America, where a private balcony provides an ideal vantage point on nights when fireworks and “Fantasmic!” spectacular are presented. 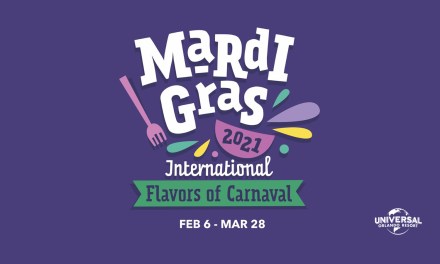