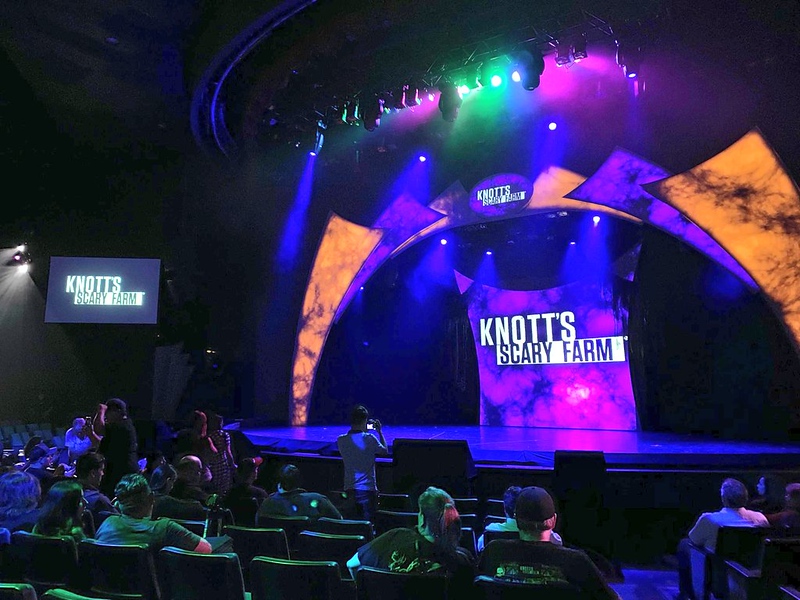 Knott’s Scary Farm returns again for its 47th frightful year with a completely transformed park that brings terrifying nightmares with new mazes, new entertainment, and new surprises.  Tonight during a special preview event, we got to hear more about the 14 haunted attractions (including 4 scare zones, 9 mazes and a seasonal overlay to the Timber Mountain Log Ride) and offerings. 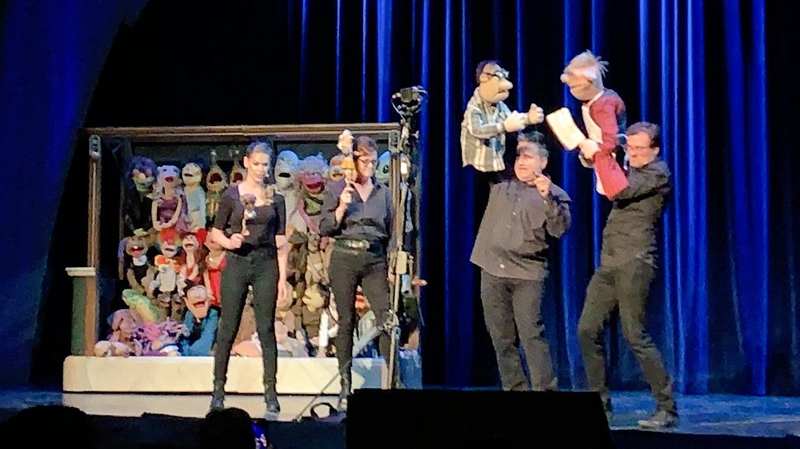 Exclusively performing nightly at Knott’s Scary Farm for the 2019 season, Puppet Up! Uncensored is an outrageous, off –the-cuff live show featuring a combination of improvisational comedy and the magic of puppetry performed by a cast of world-class comedian puppeteers from The Jim Henson Company.
Created by legendary puppeteer and award-winning director Brian Henson and directed by Patrick Bristow (Ellen, Seinfeld, Curb Your Enthusiasm, Whose Line Is It Anyway?), Puppet Up! – Uncensored is no ordinary puppet show. In true uncensored form, the content is driven by audience suggestions and participation, topped with the zany antics and bawdy shenanigans of the colorful and brazen puppet cast.  Puppet Up! – Uncensored will be performed three times each night at Knott’s Scary Farm and is intended for mature audiences. 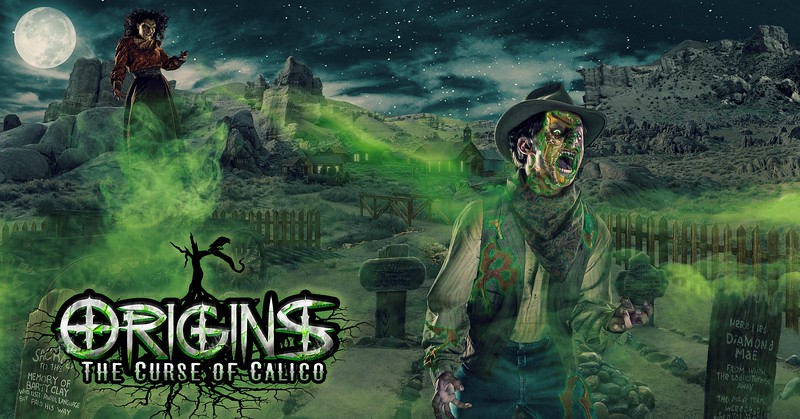 Pierce the veil of time to discover the secret of the evil fog that hangs over Knott’s Scary Farm’s Ghost Town streets in the new maze Origins: The Curse of Calico. Unearth the sinister paranormal activity that plagues the town as Sarah Marshall is put on trial for her suspected crimes of witchcraft. All will be unveiled when the Green Witch rises up and curses the townsfolk, transforming all who have accused her into a wicked horde of malicious creatures with an eternal quench for the living.

An introduction to the new maze, ORIGINS: The Curse of Calico. @Knotts #ScaryFarm #IntoTheFog pic.twitter.com/fp191HapwW 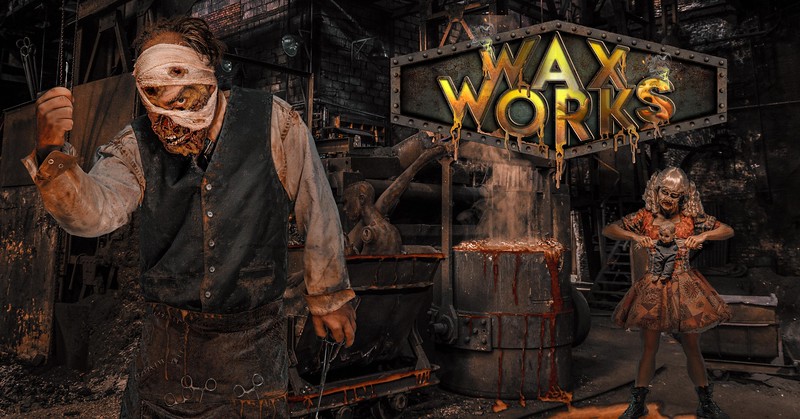 Mysterious lights and strange noises have begun to emanate from the eerie abandoned wax museum. The once prominent plastic surgeon, Dr. Augustus Scratch, has been seen tinkering at night and is now ready to show off his beautiful yet terrifying life-like masterpieces of hot molten wax and bloody flesh. It’s rumored that blood-curdling screams can be heard echoing through the halls of Wax Works as victims are horrifyingly submerged into a scorching hot cauldron of bubbling wax.  Take a closer look at his gruesome works of art and try to escape his deadly grip or become the newest masterpiece in his collection.

Enlist to fight the zombie apocalypse in an all-out war against the undead in the interactive experience, Special Ops: Infected. Armed with specially designed laser guns, brave groups of guests embark on a mission of navigating through the city in a quest to find the infection cure. Take your last shot at saving mankind as this heart-stopping attraction is going out with a bang of new surprises, including two brand-new show scenes and characters for its final year at Knott’s Scary Farm.

A fulfilling life ensures a souls safe passage into eternity but what happens to the souls of soldiers slain in battle?  Enter the hair-raising Shadow Lands maze for its final year at Knott’s Scary Farm and fight off demon samurais whose souls are cursed to rot within the depths of purgatory.  Guests will embark on a quest through a sacred shrine, an ancient Japanese temple and into the midst of the shadow lands.

The Haunting of Hayden Hill: Paranormal Inc. maze once again reopens its doors to those brave enough to uncover an eerie and supernatural adventure.

Guests investigate a haunted hospital where the patients were tortured for decades by deranged doctors and nurses. Demonic spirits of the murdered victims have been detected throughout the mysterious halls, while evil medical staff prowl for new patients to torture.

Survive the wrath of the murderous 7-foot tall creature that haunts the old woods surrounding The Hollow in the Pumpkin Eater maze. The notorious creature is on the prowl hidden within the dark confines of the haunted town he once terrorized.

To escape the sinister Pumpkin Eater’s wrath, all who enter must go on a quest through the silent town of victims, face a cave of crawling insects and solve the labyrinth of thorns that blocks the way out.

Journey through an abandoned carnival ride where cruel carnie folk still linger in the shadows in Dark Ride: Castle of Chaos. The carnival has become a refuge for freaks and carnies. Now those shunned performers have created a dark world of terror which they plan to unleash on those who enter. Dark Ride will lead brave visitors through a treacherous path and into the bowels of a long-neglected attraction, as sinister shadows and horrifying scenes cast the gloom over the once pleasant ride. It’s everyone’s worst nightmare, being helplessly trapped inside an abandoned carnival ride without a way out. New for 2019, Dark Ride will be debuting a brand-new ending show scene where guests can walk through the rides attached Gift Shop and come face to face with Smiley Sam and Baby Fool.

A heavy fog drapes over an abandoned port village where ancient creatures lurk inside the pitch-black underground caves hidden below the seaside shores. The Nightwatch Mining Crew has mysteriously disappeared and village rumors point to the eerie tunnels the town sits upon. Myths of the terrifying horrors that lurk within the cave have often been whispered but never confirmed.  Did the crew meet their demise at the hand of vicious creatures that live within the cave? Journey into the ominous caverns to discover if the superstitions revolving around the cave is true or not. But be warned all who have entered have never resurfaced.

Teleport beyond earth into a realm where the darkness is absolute. In the depths of space, a lone station faces terror beyond all imagination. An extraterrestrial mutation has invaded the station, and it’s on the prowl for new hosts.

The unearthly inhabitants’ force increases as it feeds on its unwilling victims. Escape the dark entities before its deathly force eliminates all living form aboard the station. There’s nowhere to escape when time is running out!

The residents of the Timber Mountain Log Ride celebrate the Halloween Hootenanny which adds a seasonal twist to a park favorite. Mysterious creatures of Timber Mountain that live out in the woods and caverns join the citizens as they honor the season at the Halloween Hootenanny. The ride’s interior features unexpected surprises as guests venture past the Calico Coffin Creeper band, the town’s green witch and splash down Skull Mountain through a labyrinth of jack-o-lanterns.

It’s Knott’s Scary Farm’s annual live stage show that looks back at the year’s pop culture with some killer comedy. Notorious for its special effects and high-flying stunts, The Hanging is a no holds barred assault on pop culture’s most infamous moments of the past year. A must see parody!

CONJURERS– Magic and Mirth in the Birdcage Theatre

The Bird Cage Theatre will once again become the home of comedy and magic. Join award-winning magicians and CW’s Masters of Illusion regulars as they take the stage to amaze and amuse. Witness magician Chipper Lowell and Dana Daniels front and center as they perform on select nights.

A non-stop DJ dance party has taken over Fiesta Village, where guests can jam with candy skull go-go dancers and dance to music so popular it’s sure to Awaken the Dead.

Knott’s Scary Farm is far more than a collection of haunted attractions.  Every night monsters spill out onto the streets and turn theme park midways into murderous scare zones.  From the world famous Ghost Town Streets to the Boardwalk area filled with evil clowns, there’s nowhere to hide in Knott’s Scary Farm.

We got to check out a bunch of really great merch, Disney fans might find some inspiration in a few pieces… 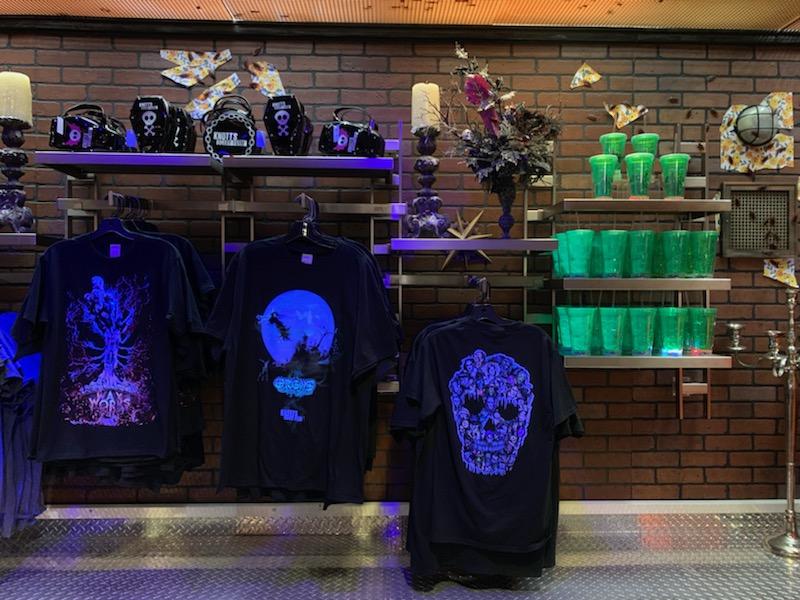 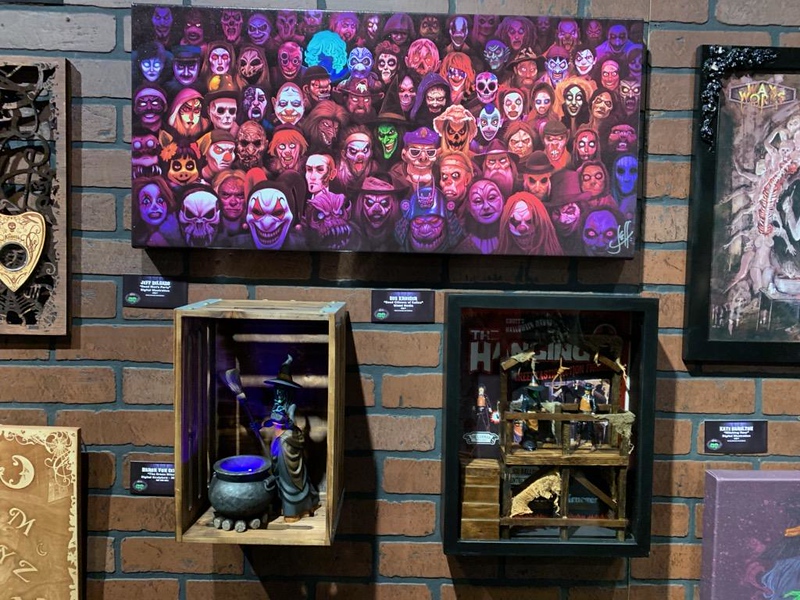 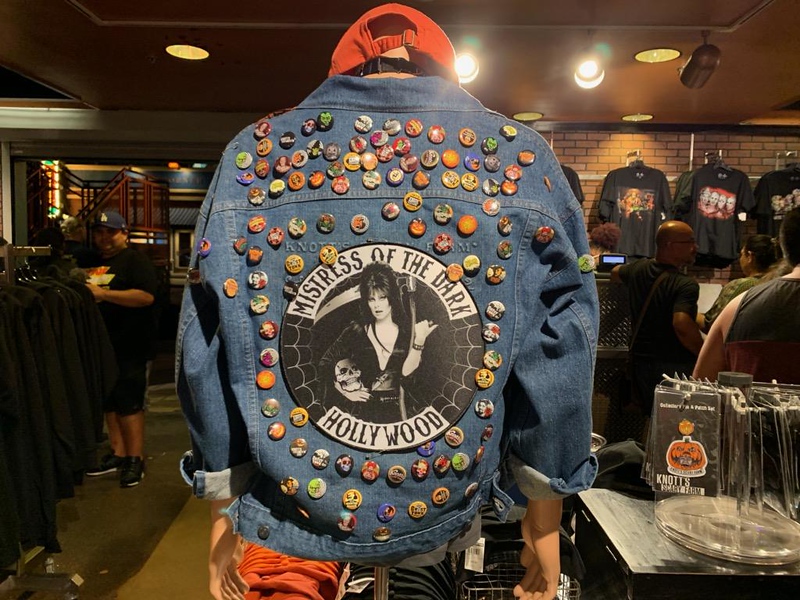 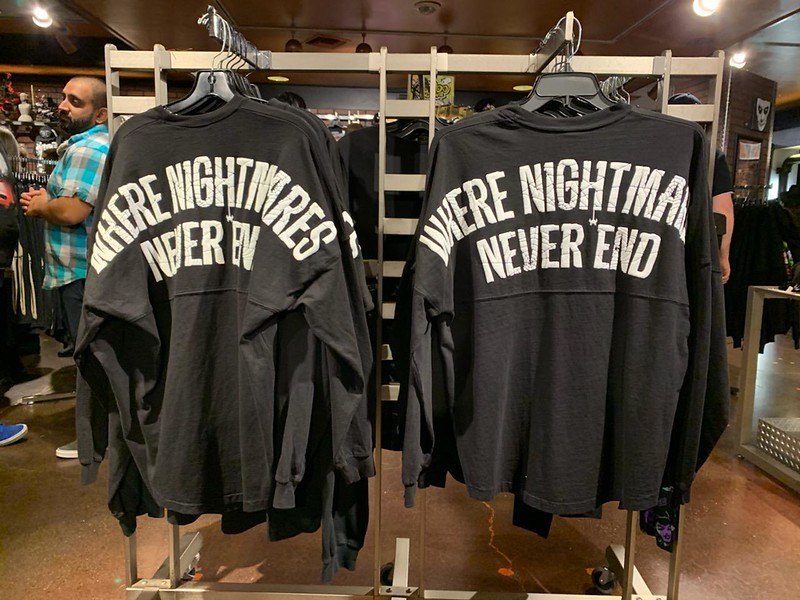 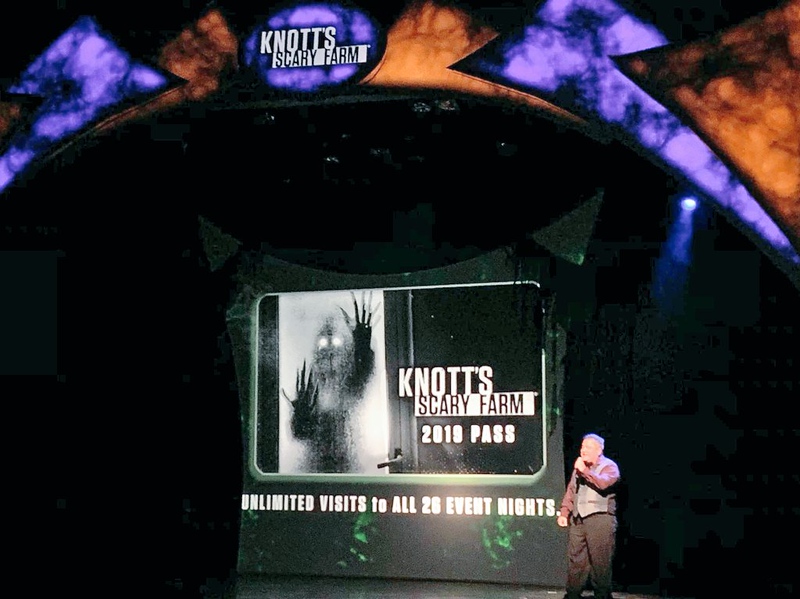 Knott’s Scary Farm is open 7:00pm – 1:00am on select Thursdays and Sundays, and 7:00pm – 2:00am Fridays and Saturdays. Due to the explicit and frightening nature of the event, it is not recommended for children under 13.