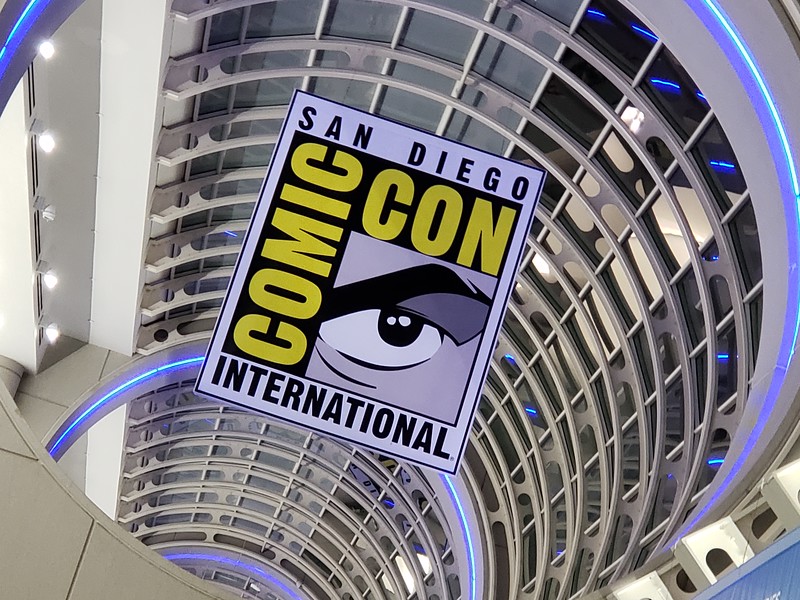 The 2019 San Diego Comic-Con is just a few short weeks away and we now have a look at the Thursday schedule of events taking place on July 18, 2019!

There’s a few panels that fall under the Disney umbrella and there’s also a few other goings on that Disney fans will enjoy, too. Disney-related highlights include: Marvel’s Agents of S.H.I.E.L.D., ABC’s Stumptown, ABC’s Emergence, and Marvel Games Panel.

There’s a few other goings on that Disney fans might enjoy including Remembering Stan Lee, LOST Fans Unite with Jay + Jack, Law of the MCU, and Higher, Further, Faster. Are We There Yet?.

Jim Starlin: The Infinity Gauntlet Saga and Beyond

Legendary comic book creator and author Jim Starlin, the mind behind the Infinity Gauntlet saga and its main protagonist Thanos, discusses how his creations have become one of the biggest pop culture references of the 21st century, thanks to the 10-year, 22-movie Marvel Cinematic Universe and its conclusion, Avengers: Endgame . Moderated by ComicBook.com’s Jim Viscardi,go into the mind of the man who began it all and hear where he is headed next.

The hosts of the hit podcast Best Movies Never Made, Stephen Scarlata (producer, Jodorowsky’s Dune) and Josh Miller (screenwriter, Sonic the Hedgehog), record a live podcast and talk about some of the greatest films never made, including Tim Burton’s Beetlejuice Goes Hawaiian. Joining them will be Ashley E. Miller (writer, Thor, X-Men: First Class), Steven Melching (writer, Star Wars Rebels, The Clone Wars), and several surprise filmmakers who will talk about the movies and TV series that got away. Aloha!

Are you a fan of ABC’s Lost ? Then join Jay and Jack Glatfelter for their 13th annual SDCC panel. The co-hosts of the popular Lost Podcast with Jay and Jack will be joined by podcasters Ralph Apel (The Dharmalars, Kaiju) and Jo “JOpinionated” Garfein (Post-Show Recaps, co-founder of Cancer Gets Lost) to discuss the thoughts, theories, and legacy of one of the best serialized TV shows of all time and touch on other popular shows such as Game of Thrones, Deadwood, Watchmen, Stranger Things, and more.

Music has always been an important supporting character in movies; it goes to another level in the superhero film genre where the music sets a tone that helps define a character, an impending battle, or a triumphant moment. The annual Musical Anatomy of a Superhero returns with a Justice League/Avenger panel of superhero composers of superhero films. Unreleased music and video clips from upcoming and recently released projects will be featured. Leading Hollywood composers will explain the process and challenges of creating music behind the superhero genre, along with collaborating with the director, producers, and the franchise. Composer panelists include Pinar Toprak (Captain Marvel, Krypton), Benjamin Wallfisch (Shazam!, Hellboy), Sherri Chung (Batwoman, Super Girl), Blake Neely (Batwoman, The Flash), Christopher Lennertz(The Boys, Agent Carter), and moderator Michael Giacchino (Spider-Man: Far From Home, Dr. Strange), with introductions by Ray Costa (Costa Communications).

Afro-futurism, “Black to the Future Too”: The Revenge (This Time, It’s Personal)

For decades, Daffy Duck was the only black actor getting any consistent work in Hollywood. Hiring practices that even Daffy would describe as, “Deth-picable!” A year after the Marvel-U.S. debut of the Black Panther movie, has anything really changed? What do you want to see next out of Hollywood? Can we truly go black to the future . . . before we go black to the past? Right on, brothers and sisters! Panelists include Denys Cowan (Milestone Media, The Boondocks), Kevin Grevioux (Underworld, I, Frankenstein), Professor Ajani Brown (San Diego State University), La Quia Howard (Kemet, I Choose 2 Be Me), and Rico Anderson (The Orville, Star Trek: Renegades). Moderated by Jimmy Diggs (Star Trek: Voyager, Star Trek: Deep Space Nine).

Law of the MCU

Ten years of the Marvel Cinematic Universe has created a body of law big enough for Nowhere. Hear from this panel of judges and lawyers as they journey into legal tales to astonish of how Dr. Strange saved the world with contract law; whether Bucky committed treason as the Winter Soldier; and could Thanos be prosecuted as a war criminal for “The Snap”? A panel of true believers including U.S. Magistrate Judge Mitch Dembin, CA Judge Carol Najera, Christine Peek (McManis Faulkner), Courtney McNulty (Legendary Entertainment), Jordon Huppert (Public Defender in Oregon), and Joshua Gilliland (The Legal Geeks) will assemble to tackle these issues and more from the Marvel Universe.

Get an inside look at the latest and greatest from Marvel Games. Attendees will see exciting new content from Marvel Ultimate Alliance 3: The Black Order, Marvel’s Iron Man VR, and Marvel’s Avengers, with many unannounced surprises and panel exclusives. Moderator Greg Miller(loudmouth at KindaFunny.com) will be joined by Bill Rosemann (VP and creative director, Marvel Games) and other panelists from titles throughout the Marvel Games family.

Beyond explanation . . . beyond understanding . . . lies the truth. Cast and executive producers will present a first look at the pilot episode of ABC’s new drama series Emergence, followed by a panel discussion. This character-driven genre thriller follows a police chief who takes in a young child she finds near the site of a mysterious accident who has no memory of what has happened. The investigation draws her into a conspiracy larger than she ever imagined, and the child’s identity is at the center of it all. Panel participants include executive producers Michele Fazekasand Tara Butters with cast members Allison Tolman, Donald Faison, Clancy Brown, Alexa Swinton, Owain Yeoman, Ashley Aufderheide, Robert Bailey Jr., and Zabryna Guevara.

The cast and producers of Marvel’s Agents of S.H.I.E.L.D. take over Hall H for the first time ever! Be the first to hear the scoop about the show-stopping conclusion for season 6 and what awaits in season 7 of Marvel’s flagship television show. With your favorite stars in attendance, including Clark Gregg, Ming-Na Wen, Chloe Bennet, Elizabeth Henstridge, Iain De Caestecker, Henry Simmons, Natalia Cordova-Buckley, and Jeff Ward, along with executive producers Maurissa Tancharoen, Jed Whedon, Jeff Bell, and Jeph Loeb, this is a must-see panel to celebrate seven seasons with the world’s greatest fans! This action-packed series from Marvel Television and ABC Studios airs Fridays at 8/7c on ABC.

Fans remember the life and legacy of the legendary Stan Lee. Starting with Fantastic Four for Marvel Comics in 1961, Stan (together with fellow co-creator artists Jack Kirby and Steve Ditko) brought to life the Hulk, Doctor Strange, Daredevil, and our favorite neighborhood Spider-Man! This panel will celebrate with a collection of fan art and the best of Stan’s cameos in the Marvel Cinematic Universe, plus stories from those who knew Stan and his genuine appreciation for his fans. Moderated by Christine Quimbo and Anastasia Hunter.

Women on the Dark Side

Not all female artists/creators are about unicorns and glittery vampires and silly pseudo-bondage. Some women create truly dark and challenging art and content, with just enough humor and whimsy to counterbalance all that darkness. Whether it’s comic books, novels, or art, these are the women who are creating content that connects with the deeper, darker side of all of us. Panelists include Mairghread Scott (Netflix’s Magic, The Gathering, Marvel Rising), MD Marie(Vindication), Susan Lee (founder, Women on The Dark Side), as well as other exciting creators, moderated by Joelle Monique (Black Girl Nerds).

Based on the Stumptown graphic novel, ABC’s new drama series follows Dex Parios (Cobie Smulders), a strong, assertive, and sharp-witted Army veteran with a complicated love life, a gambling debt, and a brother to take care of in Portland, Oregon. Her military intelligence skills make her a great P.I., but her unapologetic style puts her in the firing line of hardcore criminals and not quite in alliance with the police. Panel participants include cast members Cobie Smulders, Jake Johnson, Michael Ealy, Camryn Manheim, Tantoo Cardinal, Cole Sibus, andAdrian Martinez, with executive producer Jason Richman and Stumptown graphic novel authorGreg Rucka.

Higher, Further, Faster. Are We There Yet?

Female superheroes are finally getting their due on screen and reigning at the box office. Star Wars now centers on a female Jedi, Black Panther brought a dynamic array of female characters to the MCU, and there is the first female Doctor since the character’s 1963 debut. Women-owned companies like Jordandené and subscription boxes like FanMail provide female-fan-forward fashion and merchandising opportunities that didn’t exist a decade ago. Online commentary from sites like SYFYFangrrls, fangirl-run podcasts, and events like GeekGirlCon continue to successfully challenge the notion that fandom is a male-dominated space. So why are women still having to prove themselves as consumers and community members, as well as pop culture enthusiasts and producers? Why has the “fake geek girl” myth persisted? Join Jennifer K. Stuller(Ink-Stained Amazon; co-founder GeekGirlCon), Suzanne Scott (UT Austin, Fake Geek Girls), Sarah Kuhn (Heroine Complex, Shadow of the Batgirl), Britta Lundin (Ship It, Riverdale), Rose Del Vecchio (FanMail), and Rebecca M. Davis (NW POC Geeks; Nerdlesque MC; GeekGirlCon), and C. B. Lee (Not Your Sidekick; Not Your Villain) as they punch holes in the sky for a dynamic, inquisitive, compassionate, community-building discussion exploring how far they’ve come culturally as female fans, struggles they still face as cultural critics and culture makers—and ways for us all to go higher, further, and much much faster.

The Her Universe Fashion Show

Presented by Her Universe, Hot Topic, and She-Ra in partnership with Cartoon Network, the Her Universe Fashion Show has become one of the must-attend events on Thursday at Comic-Con, as 24 designers compete with their original “geek couture” designs to win the ultimate prize: the opportunity to design a Her Universe fashion collection for Hot Topic. Hosted by actress and Her Universe founder Ashley Eckstein.

An introduction to the creation of fan-made villain costumes from all Star Wars movies and beyond. Legion members from the Imperial Sands Garrison will provide an overview of the creative process that brings Stormtroopers, Tusken Raiders, Boba Fett, or Kylo Ren from the silver screen into reality. They will discuss the membership journey, from initial interest through final approval. They will speak about the process for working with armor parts, small prop and soft costume construction, and 3D modeling and printing.