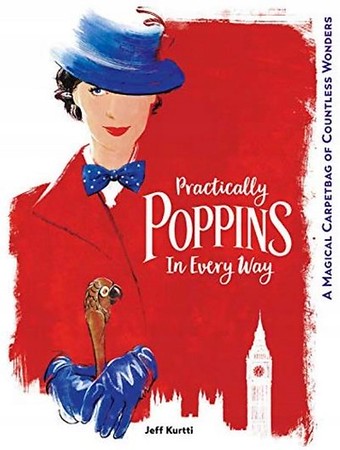 Like the unexpected winds in the east, we received a review copy of author Jeff Kurtti’s new book Practically Poppins in Every Way: A Magical Carpetbag of Countless Wonders. We were delighted to find a rather robust tome looking not just into the brand new film but into the legacy and history of the practically perfect nanny!

It’s no secret that a lot of us on the MouseInfo crew absolutely loved the recent MARY POPPINS RETURNS and the colorful and informative pages of this book help keep the magic flowing. While the cover — featuring an artistic interpretation of Emily Blunt in the iconic role — would seemingly indicate a book solely about the 2018 sequel, this book is like a veritable carpetbag full of facts, photos, and sketches from both films and beyond.

Did you know that Julie Andrews was not the first person to portray Mary Poppins in film? In fact, did you know Disney’s interpretation was not even the first version? I certainly didn’t and neither did the book’s own author prior to writing this book! As we learn here, legendary character actress Mary Wickes (you’d recognizer her in iconic roles such as Sister Act, White Christmas, and countless television programs including “The Twilight Zone”) portrayed the iconic nanny for a CBS television special in 1949 — a full 15 years before Disney’s magical tale would hit the silver screen! It’s little facts like this, along with anecdotes, tributes, and other submitted pieces of writing that make this book such a delightful piece to keep on the book shelf.

The book seems to take equal parts detail and imagery. Whether it’s behind the scenes photography, official stills from the film, or scans of old sheet music, album covers, posters, and ephemera, there really is an exhaustive breadth about everything Poppins.

We start off predominately setting up and talking about the new MARY POPPINS RETURNS for a large majority of the front  half of the book but then quickly fly into a wide ranging assortment of topics from original author P.L. Travers (and the SAVING MR. BANKS film made about her experience with Disney), casting (both coulda-beens and final choices — Angela Lansburry was almost cast!), production, and the film’s overall wide-ranging impact. 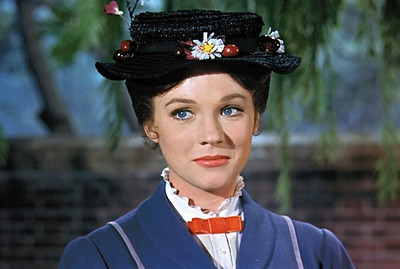 There’s a lovely, albeit painfully short, section on the art and artistry of the film and its creators, most notably Peter Ellenshaw. But there’s also mention of other notable contributors including Don Degradi, Bill Justice, and even X. Atencio. The costumes are as much a part of that artistry and we learn about some of the process of Tony Walton including the tribulations of taking the Poppins world from a decidedly more provincial setting into a more elegant and screen-ready Edwardian theme.

There’s also much-deserved respect paid to the iconic music and songs of the film with a few sections covering not just the Sherman Brothers but also Irwin Kostal. The book also dives into the Broadway musical with contributions from Gavin Lee and Marc Shaiman. There’s even a section talking about the impact of the music over the decades and the timeless popularity of the songs through the decades. Some great looks at vinyl record album covers and even toys over the years are also be found here, too.

Jeff Kurtti’s Practically Poppins in Every Way: A Magical Carpetbag of Countless Wonders is not just a pretty picture book, it’s truly a fan’s plunge into the legacy of one of Disney’s most classic pieces of film. While it would certainly be a misnomer to call this book a “deep dive” into the world Mary Poppins, there’s more than 200 pages of wonderful anecdotes, stories, recaps, and images to absorb and you’ll walk away glad for the journey with a better top-to-bottom appreciation.

MORE INFO: ‘Practically Poppins in Every Way: A Magical Carpetbag of Countless Wonders’ is available now.