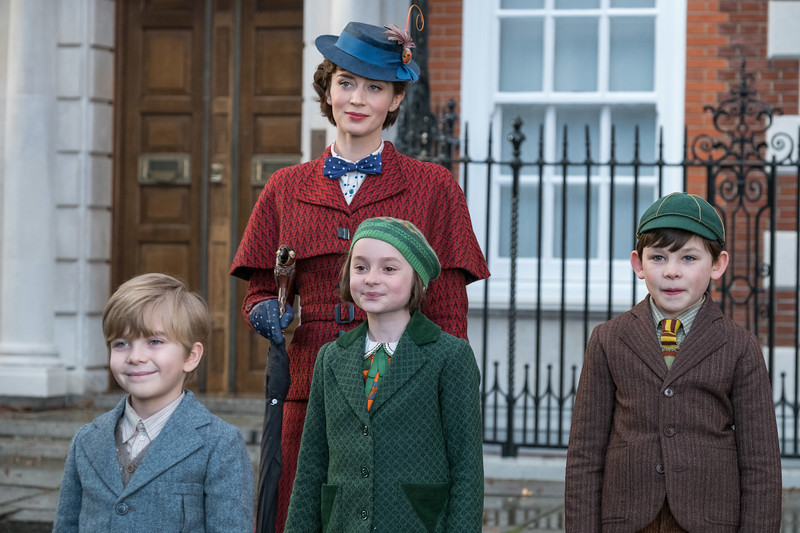 Fifty four years after Walt Disney enchanted the world with his seminal masterpiece, MARY POPPINS, the studio has circled back to the untouchable classic for a sequel (not a remake). Based on the practically unadaptable book series by P.L. Travers, Walt’s team, lead by the legendary Sherman brothers, the original film has been loved by generations. I love MARY POPPINS. How many children have been convinced an umbrella would help them fly? I know I was, and got the bruises to prove it.

I was a freshman in college when MARY POPPINS received its first major DVD release; a big deal at the time. I got my hands on an advance copy and was stunned to find out what I had missed as a kid. Sure, it’s a fantasy film about a family learning how to be just that, but there are radical undertones, jokes that sail over children’s heads, asides from Mrs. Banks about the nature of men. It’s masterful in its ability to play to every audience.

You can imagine my skepticism when MARY POPPINS RETURNS was announced. A sequel, now? Why? And without Julie Andrews? It seemed like a Sisyphean task, hardly worth undertaking. As names started to be named – Emily Blunt taking up the umbrella, Rob Marshall directing, new songs by Marc Shaiman & Scott Wittman – I became cautiously optimistic. Marshall’s CHICAGO is an all-time stunner. Shaiman & Wittman have written some of my favorite scores. Blunt is a wonderful actress who proved her musical chops with INTO THE WOODS.

Still, I settled into my seat at a recent screening ready to be disappointed…just in case.

It took about 90 seconds for all trepidation to melt away. Lin-Manuel Miranda opens the film with a musical prologue, and by the end of the first verse, Marshall pays tribute to the original in a way that signaled to me that this was not just going to be alright – it was going to be great.

I don’t know when the floodgates opened and I started to genuinely sob, because it happened more than once. 2018 has been a hard year for a lot of people. Heck, it’s been a hard year for the world. MARY POPPINS RETURNS is a gift, and a sorely needed one. You should grab everyone you love and see it on a gigantic screen with a glorious sound system, and let the fabulous new-yet-familiar magic wash over you.

Some 25 years after the events of the first film, Jane and Michael Banks are grown up. Michael (beautifully played by Ben Whishaw) has children of his own, three to be exact, but we learn that he recently lost his wife. The Great Depression has reached London and creditors are closing in. Some day-saving is required, and the world’s most magical nanny arrives to help do just that.

Blunt makes Mary her own. No one is Julie Andrews, and Blunt knows this – she veers away from impersonation while hanging on to enough mannerisms to feel real. An Oscar nomination is calling her name. Miranda more than acquits himself as he fills the screen with charm. Whishaw is the emotional core of the film in what could be a dreary role. Emily Mortimer imbues Jane Banks with the same vigor and slight vacancy Glynis Johns brought to Winifred Banks in the original. Meryl Streep clearly enjoyed herself way too much as cousin Topsy, and turns in a fabulous performance. The highlights of the film are seeing Dick Van Dyke and Angela Lansbury in cameo roles that threaten to yank your heart out so hard you could drop dead in the theater. They’re worth the price of admission.

Critics will point out that MARY POPPINS RETURNS seems to echo the original film nearly beat for beat. It seems each song in the new film has a spiritual twin in the original. The delightful “Can You Imagine That?” is a successor to “A Spoonful of Sugar”, “Trip a Little Light Fantastic” is 2018’s “Step in Time.” This might bother some people, and those people are wrong to be bothered. The new story and songs stand on their own despite following a familiar formula, and honestly, diverting too much would have been ruinous.

The highest praise I can give here is that this movie feels old. Movies don’t look or sound like this anymore. It feels like a movie Walt Disney could have produced. It’s glorious, absolutely glorious.

Marshall does some of his best work here, and his adoration for the original and Travers’ books is evident. His insistence on hand drawn animation for the Royal Doulton Bowl sequence pays off, and the choreography he provides in “Trip a Little Light Fantastic” would nab him a Tony on Broadway. The story crafted by Marshall, his producer John Deluca and screenwriter Dave Magee hits the right notes without straying too far or staying too faithful. The snappy lines bestowed upon Blunt by Magee are treasures, and her delivery of each one is spectacular.

Special attention must be paid to Marc Shaiman and Scott Wittman’s songs, and Shaiman’s score for the film. Writing new songs for Mary Poppins to sing is a daunting job, and they nailed it. Shaiman’s score is thrilling, and it sounds like a big Irwin Kostal score, just like the original. The orchestrations are monumental. Shaiman handles musical hall brashness with the same love and attention to detail as he does heartbreaking ballads.

The costumes from genius Sandy Powell are fabulous and soon-to-be iconic. I’m positive Powell will have another Oscar on her shelf come February. It’s been a long time since a Disney live action musical has received Oscar buzz, but with a Best Picture nomination already in the bag at the Golden Globes, the Oscars can’t be far behind.

Don’t miss the chance to see Mary where she belongs – on the big screen, enchanting young and old alike.