The 2018 Festival of Holidays are here and we got our chance to get our first taste of what the booth has to offer. The flavors span the continent bringing salty, sweet, and spicy combinations to tempt the palate!

If you missed it last week, we took you on another Disneyland Resort food tour for all of the NON Festival of Holidays food and drink options!

Pozole Rojo Beef with Hominy Polenta ($7.50) is one of those rare surprise hits that we find every year. At first, we weren’t even going to try this dish because we thought it was the traditional Mexican pozole soup. But once we realized it was at the “Twist on Tradition” booth our interest was piqued. This dish is awesome, it was our favorite of the day. If you’ve had pozole before then you’ll already understand the flavors going on here.

The meat was juicy and spiced just like the soup — the heat level was on the higher side so spice wimps beware! The polenta cake underneath made of hominy is a perfect complement to the spiced meat. The two flavors together combine to create that wonderful classic taste and it’s a winner. We would have liked a little more of the cabbage to balance the heat but man was this thing tasty!

Shrimp and Grits with Andouille Sausage

Shrimp and Grits with Andouille Sausage ($8) was a powerful kick of flavor. We were turned off at first by the seemingly excess of broth but came to realize that the magic spicy liquid was a vital component of the dish. The three shrimp were cooked perfectly and served over a cheesy dollop of grits. Bits of sausage added some heat and overall balanced this dish into a festival must-try for us. 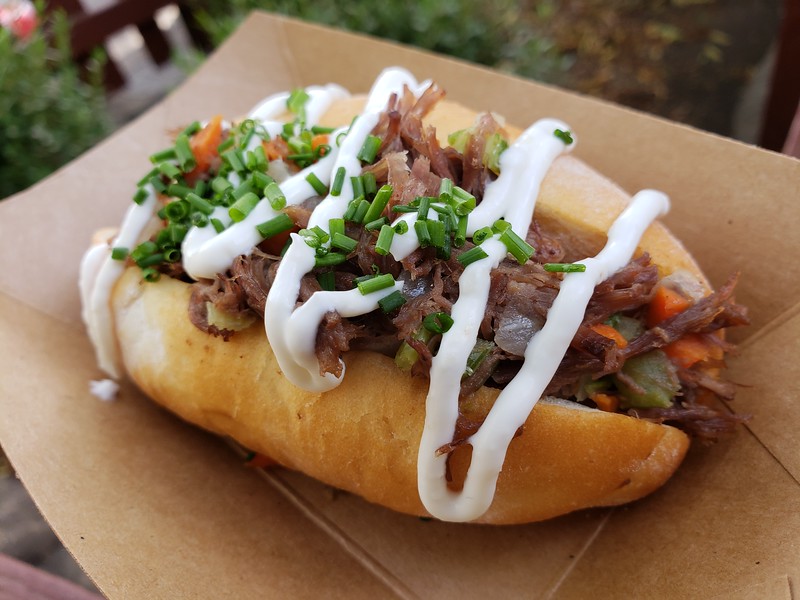 Beef Pot Roast on a Potato Roll with Horseradish Cream

Beef Pot Roast on a Potato Roll with Horseradish Cream ($8.50) was a fantastic little sandwich with tender juicy pot roast that gets some texture from the veggies and a pop of flavor from the horseradish. A solid contender. We only wished there was a touch more horse-radish to better balance out the portion of beef. 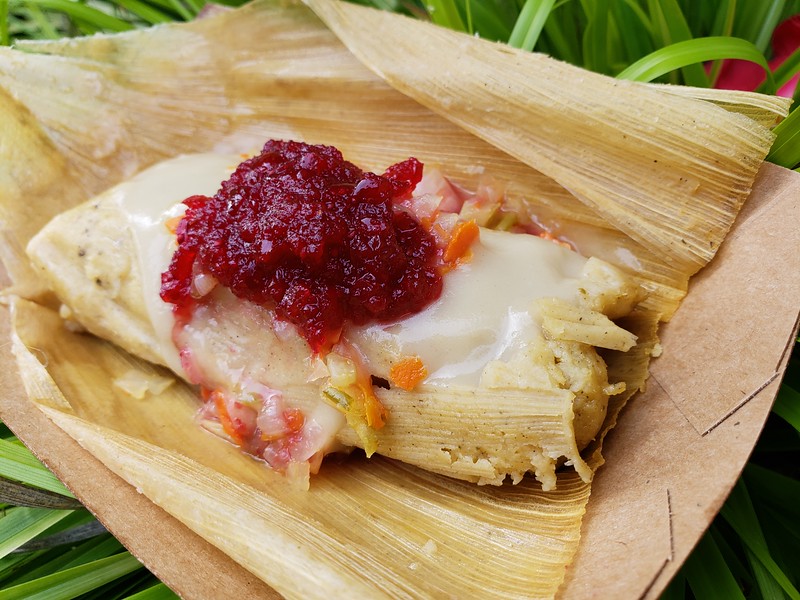 Turkey & Stuffing Tamale with Cranberry Relish ($7.75) is an odd one. If it sounds to you like the flavors wouldn’t really come together into a tasty dish, you’d mostly be right. While the dish didn’t taste bad, it’s certainly not a dish we’d want to try again. The tamale masa was flavorful but the filling just did not come together for us into an inspiring mashup.

Lox & Everything Bagel Nachos ($7.50) were pretty good although it didn’t knock our socks off. We were surprised at the amount of salmon portion which we thought would be smaller. The “everything” relish on top is a great flavor booster but the amount of cream cheese was disappointing. We ate through most of the top layer and found a large layer of bare bagel chips.

Curry Cauliflower Soup with Braised Lamb and Mintchurri ($7.50) is a decent choice if you like curry although we’re not in a hurry to speed over for this dish. Perhaps more out of personal preference we just didn’t find much to write home about the dish. The curry nice and thick, the lamb tender and juicy. The chimichurri provided the expected brightness.

Candied Yams with Marshmallow Cream and Toasted Pecans ($7.50) are one of those dishes that probably taste great when fresh. Ours however, had clearly been sitting for a bit by the time we got it. The yams were dried out (not by cooking but seemingly by sitting out). As was our trend for the day, we felt a little more of the sauce (in this case the Marshmallow Cream) would have done the dish some good.

Jalapeño Latkes with Chipotle Crema ($6.50) are a nice spicy treat. The latkes taste just like they should and the fresh apple crisps on top are a wonderful flavor complement with the spicy chipotle crema. Definitely a satisfying side-dish.

Cranberry Sangria with Lime Garnish ($10.25) is a delightfully refreshing beverage with tartness and sweetness that will be hard to not drink all in a single chug.

Milk Chocolate Candy Cane Pot de Crème ($4.50) is a holdover from last year. It’s really about as simple a holiday flavor as you can get. Chocolate and peppermint. Tasty and refreshing.

Nashville Fried Hot Turkey ($7.50) is another hold over from last year with dill pickles served on a toasted bread. We tried this last year and found it a tasty option but needing either more pickles or an additional sauce. Neither of those seemed to have manifested this year.

2018 Festival of Holidays Sip & Savor Tasting Passport is available to ALL guests with you the opportunity to taste through your choice of eight different dishes or non-alcoholic beverages from participating Festive Food Marketplaces.

This pass can be purchased at various locations throughout the park, including Festival Merchandise Carts, Seaside Souvenirs, Kingswell Camera Shop, and Rushin’ River Outfitters.

VALUE ALERT: To get the most bang for your buck out of the passport, you’ll just want to make sure you don’t get any of the items that cost less than $6.75 (regular) or $6.13 (passholder). Considering the prices, that shouldn’t be terribly difficult as long as you avoid desserts and drinks.

There’s a ton of offerings at the Resort, below are all the holiday food items available to tempt your palate:

Flavors of the Season Flight

A Twist on Tradition

Cuddle me to death with the new images, poster, and trailer for CHRISTOPHER ROBIN!!

MORE DETAILS: Entertainment, food, and more for #GetYourEarsOn celebration at the Disneyland Resort

What exactly to expect with THE MANDALORIAN on #DisneyPlus